Your stand mixer probably came with a few attachments, like a dough hook and whisk for whipping cream, meringue, and other similar toppings and fillings. But if you love to cook or bake, picking up a few more attachments (we recommend you stick with the same brand as your mixer) will allow you to slice veggies, roll pasta, churn ice cream, and more!

Making pasta by hand might seem like something only pros can do, but with this Antree Three-in-One Pasta-Maker Attachment, you’ll feel like a gourmet chef! Pasta attachments typically do both the rolling and cutting of pasta dough for thin, even noodles. Look for one that has multiple width options so you can customize and make more than one type of noodle.

You simply attach it to the hub on the front of your mixer, and then feed the dough through the roller in the center. You can choose between two blades for cutting thin spaghetti or wider fettucine noodles. Plus, it comes with a brush for easy cleanup afterward —no sticky dough and flour residue

Make two of the most popular types of pasta with one attachment.

Yep, you can also turn your stand mixer into an ice cream machine. Instead of attaching to the top of the mixer, to use an ice cream attachment, you swap out the bowl and paddle part. In its place, you put an insulated freezing bowl and dasher to “churn” the ice cream and scrape the sides as it does so.

RELATEDStand Mixer or Hand Mixer: Which Is Best for Baking?

The KitchenAid Ice Cream Maker Attachment has everything you need to produce creamy, delicious ice cream in just 20-30 minutes. You can make up to two quarts of fresh ice cream, sorbet, or gelato. The set includes the freezer bowl and the dasher, as well as an adapter ring for certain tilt-head mixers. Just freeze the bowl ahead of time, put everything in the mixer, and let it churn its magic.

This freezer bowl and churning dash turn your stand mixer into an ice cream machine.

It can take a lot of time and effort to shred ingredients—especially vegetables—by hand, whether you use a knife or a chopper. Instead of these time-consuming approaches, did you know that your stand mixer can do the job for you?

With a set of small attachments, you can feed ingredients into a shredder and let the power of your mixer do the bulk of the work and produce uniform pieces.

Three shredding and slicing attachments in one easy tool.

A stand mixer can make a huge difference when grinding fresh meat at home. With the electric power from a grinder attachment, it’s easier than ever to grind your own meat or sausage, to make meatballs and other dishes. Plus, they aren’t exclusively for meat—these attachments can be used to grind or grate anything.

The BQYPOWER Food Grinder Attachment Set is made of sturdy metal and includes grinding blades and plates, as well as a tube for making sausage and a pusher to keep the ingredients moving through the grinder safely. It’s a great multipurpose attachment that uses the power of your stand mixer to upgrade any recipe that requires freshly ground ingredients.

Grind meat or other ingredients right on your stand mixer.

Spiralizing veggies is incredibly popular right now, especially given the trend of substituting vegetable-based fresh “noodles” in many pasta dishes. However, you need an excellent spiralizer to get those perfectly curled pieces. Instead of a hand-cranked spiralizer, though, an automated attachment for your stand mixer will allow you to churn out plenty of pieces in no time.

The KitchenAid Spiralizer Plus Attachment doesn’t just turn fruits and veggies into piles of curly noodles, though—it also peels, cores, and slices. You can choose from three levels of thickness for the spiralizer alone. There are also plenty of other options, whether your need to slice or peel!

Does so much more than just spiralize, including peeling, coring, and slicing.

You can turn your kitchen into a cooking haven any pro chef would envy with the right attachments for your stand mixer. From slicing and dicing to making your own pasta and ice cream, that kitchen workhouse truly can do it all! 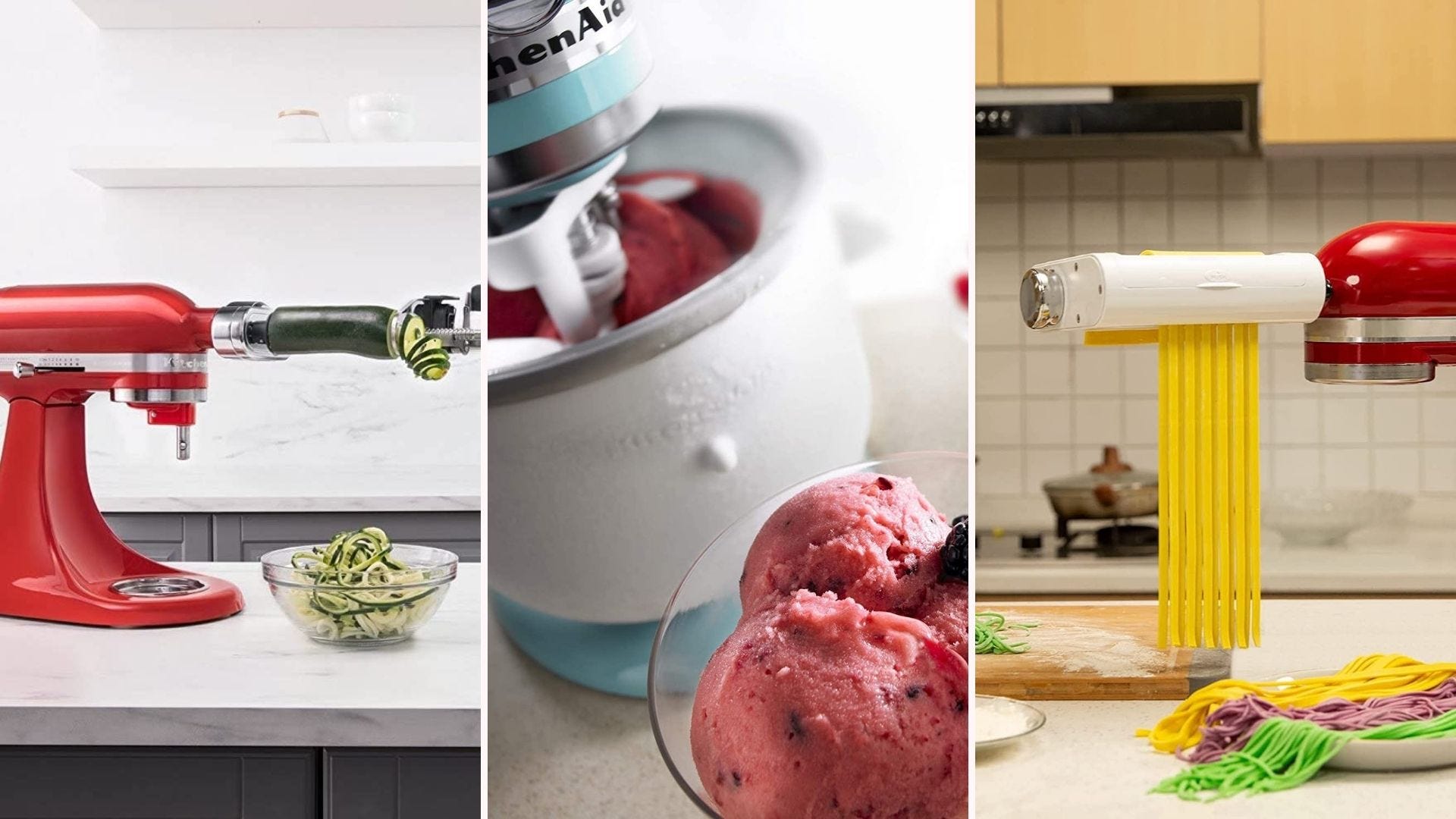 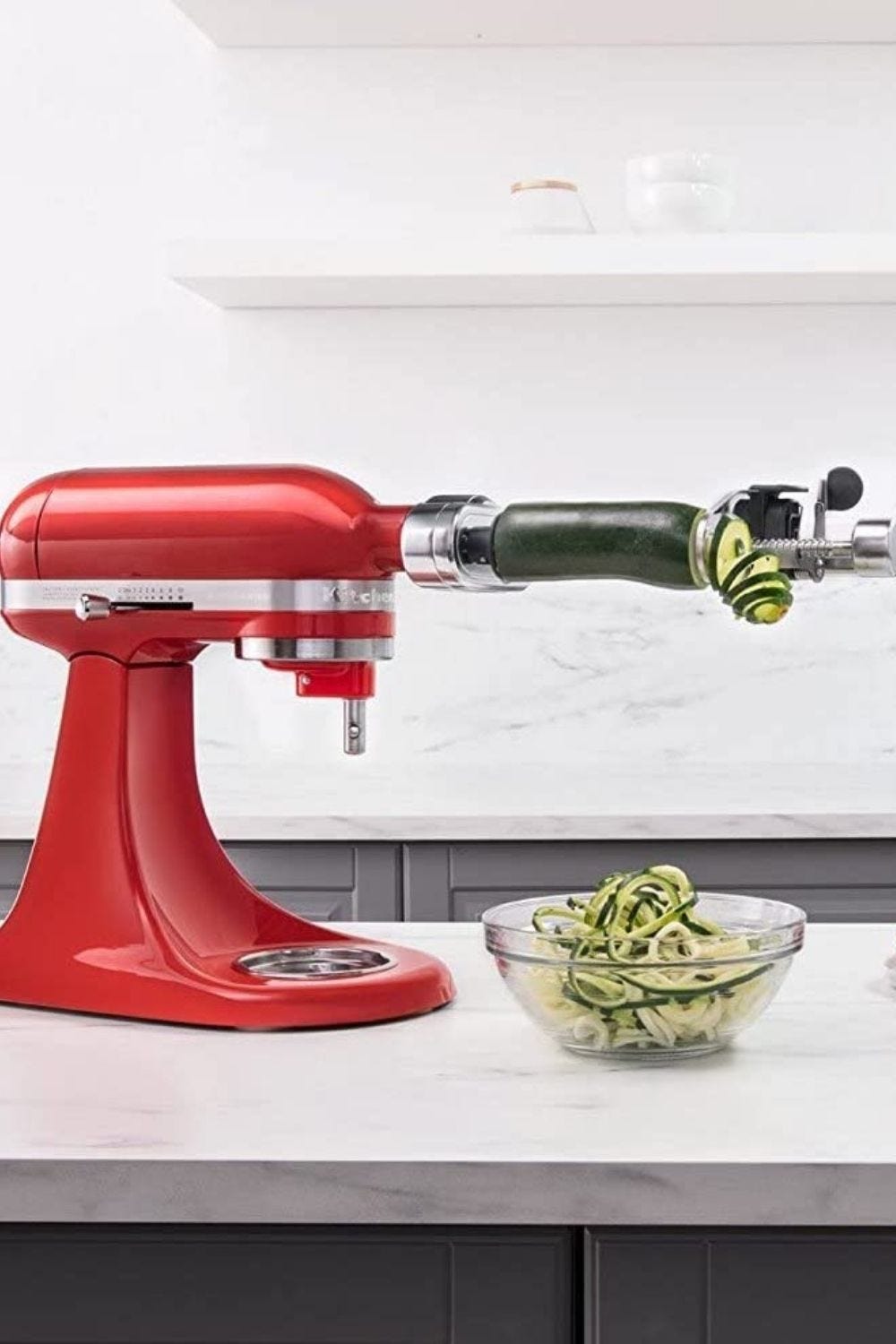