The basic cinnamon roll is a staple of bakeries, brunches, and holiday mornings everywhere, but there’s so much you can do with these simple sweet rolls. With just a few creative twists, you can create an entirely new (but still incredibly delicious) version in just about any flavor combination you can imagine.

Cinnamon rolls are really a pretty basic recipe. You start with yeasted dough, roll it out, spread on some softened butter, add the cinnamon and sugar filling, and then roll them up to slice and bake. However, by tweaking the dough, filling, or both, you can create an entirely new version of these tasty treats. Here are some recipes to expand your sweet roll repertoire beyond basic cinnamon!

Ease your way into different roll flavors with these Apple Pie Cinnamon Rolls. You’ll still get all the sweet cinnamony goodness you’re used to, but with a major upgrade. After the usual cinnamon sugar layer on top of the freshly rolled dough, you just add a layer of sautéed apple pieces.

Top it all with a sweet vanilla frosting, and you’ve basically got the cinnamon roll version of your favorite apple pie/vanilla ice cream combo.

Get the Recipe: Ella Claire & Co.

For these and any other kind of sweet rolls, you will need a reliable rolling pin to get your dough just the right thickness without overworking it. Consider a French-style rolling pin, like this one from KARRYYOUNG.

The tapered, handle-less design gives you greater control, which is crucial when rolling out dough to hit that perfect sweet spot. Plus, it’s super easy to clean, since it’s all one solid piece of wood.

Looks fancy, but is super easy to use.

These Pumpkin Cinnamon Rolls are definitely the ultimate cold-weather version of this classic pastry. Instead of traditional, plain dough, this recipe calls for pumpkin and spice.

Fill it with a classic brown sugar and cinnamon spice filling. Then, you finish it all off with a rich, creamy maple cream cheese frosting, for a slightly different, but still sweet, finish.

Cinnamon and peach is a classic flavor combo that brings out the best in both. That’s why these Peach Cobbler Cinnamon Rolls are so delicious.

Instead of a simple cinnamon/sugar filling, these rolls are filled with a combination of an almond oat crumble and cinnamon-spiced peaches. It’s all topped off with a light vanilla-almond glaze for the perfect middle ground between two classic treats.

Get the Recipe: Joy the Baker

Making your own dough for cinnamon rolls gets less intimidating the more you do it. It also helps to get comfortable with the tools that make working with dough much easier. A dough scraper will help you get a quality dough.

It prevents you from overworking the dough or leaving bits behind. It also prevents the warmth from your hands from affecting the dough’s temperature or texture. It also doubles as a slicer for getting perfectly even rolls.

Get perfect dough without overhandling.

Is there anything quite as decadently delicious as Nutella? These Cinnamon Rolls made with the creamy hazelnut-chocolate spread are even more gooey and wonderful than the original.

This easy recipe starts with a basic dough and filling, before you make everything better by spreading a layer of Nutella on top.

Get the Recipe: Love in My Oven

RELATEDGrab This Gear to Upgrade Your Pastry Baking Experience

Cinnamon isn’t the only flavor you can use to make delicious sweet rolls. While this orange version does call for cinnamon in the filling, it’s not the star flavor. Both the dough and glaze are packed with fresh orange juice and zest.

They’re a great way to add some zingy citrus punch to the classic cinnamon roll, without totally abandoning the classic flavor everyone loves.

These Chocolate Chip Cinnamon Rolls combine a traditional brown sugar and cinnamon filling with just a hint of chocolate. It all starts with a basic yeasted dough, which is then topped with a buttery, sugary cinnamon filling.

The not-so-secret ingredient is a layer of mini chocolate chips, which are sprinkled on top of the cinnamon layer before the dough is rolled up. The end result is cinnamon rolls that have just a touch of chocolate in every bite.

Get the Recipe: What’s Gaby Cooking

For cinnamon rolls, you can, technically, use any pan in which they’ll fit. In most ovens, though, ceramic baking dishes will give you the best results. They provide even heating for gooey, but fully-baked, rolls all the way into the center.

Look for a reliable, hard-glazed ceramic baking dish, like this option from Emile Henry HR Modern Classics. It’s made of high-fired clay for excellent heating and long wear, and it’s perfect for baking sweet rolls, and much more.

For even, perfectly baked rolls every time.

You can serve traditional cinnamon rolls for breakfast, brunch, or dessert. In the case of this Carrot Cake version, although you might expect them to be super sweet and far more dessert-like, prepare to be surprised!

The dough is still a fairly typical yeasted dough, but the recipe calls for the addition of some extra spices and grated carrot. It’s then topped with a creative pineapple cream cheese frosting, incorporating all the flavors of your favorite carrot cake in a sweet roll.

Get the Recipe: Joy the Baker

Instead of a basic cinnamon filling, chopped pecans are added. The butter is then cut into the filling, rather than just softened and spread on the dough. As a result, the filling has a chunkier, more streusel-like texture instead of just melted sugar. This results in a slightly different, but still warm and comforting, sweet roll.

Get the Recipe: Mix & Match Mama

Cinnamon rolls are a classic recipe for a reason, but if you’re feeling experimental this holiday season, give one of these variations on the theme a shot. We promise you won’t be disappointed! 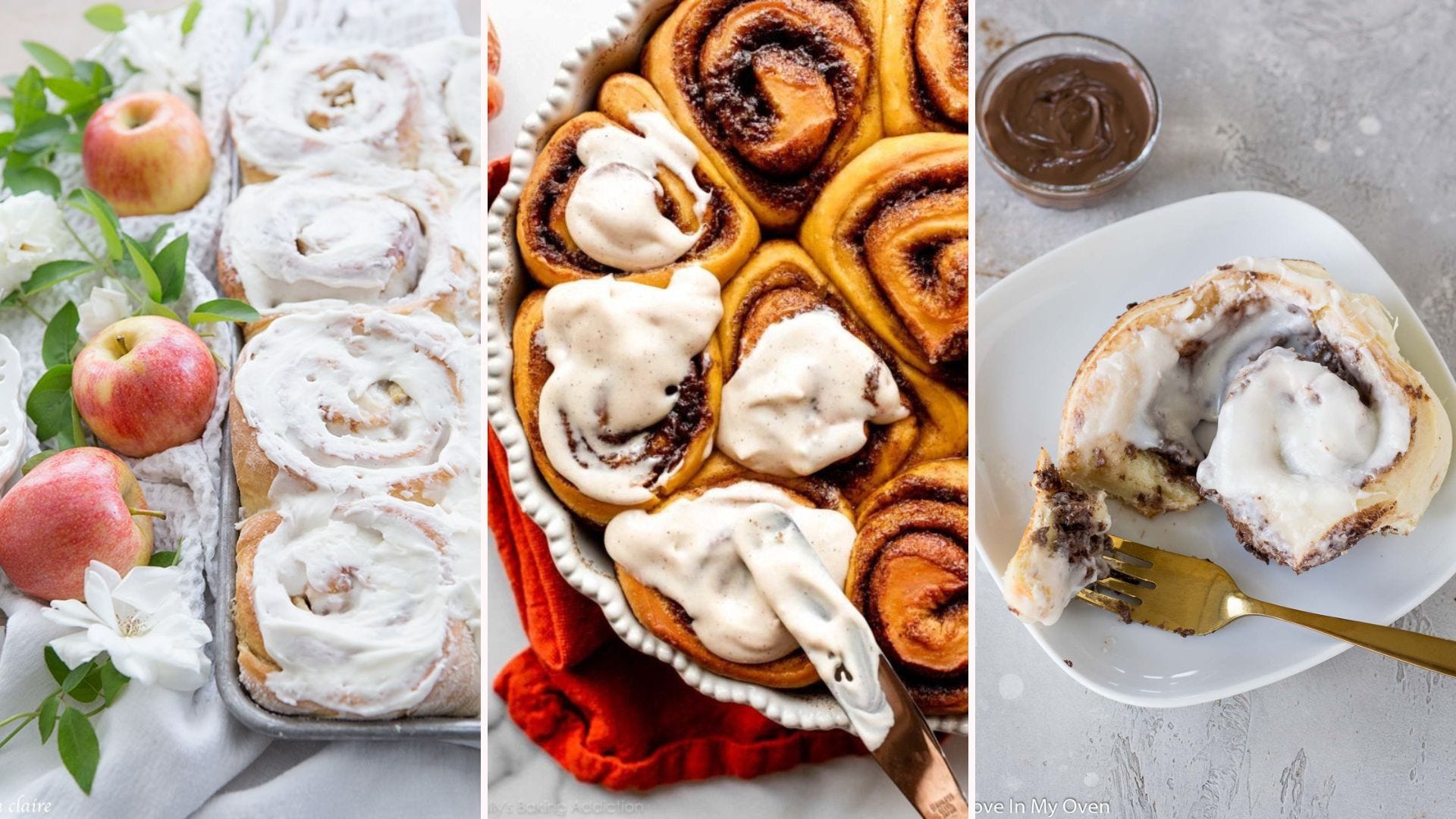 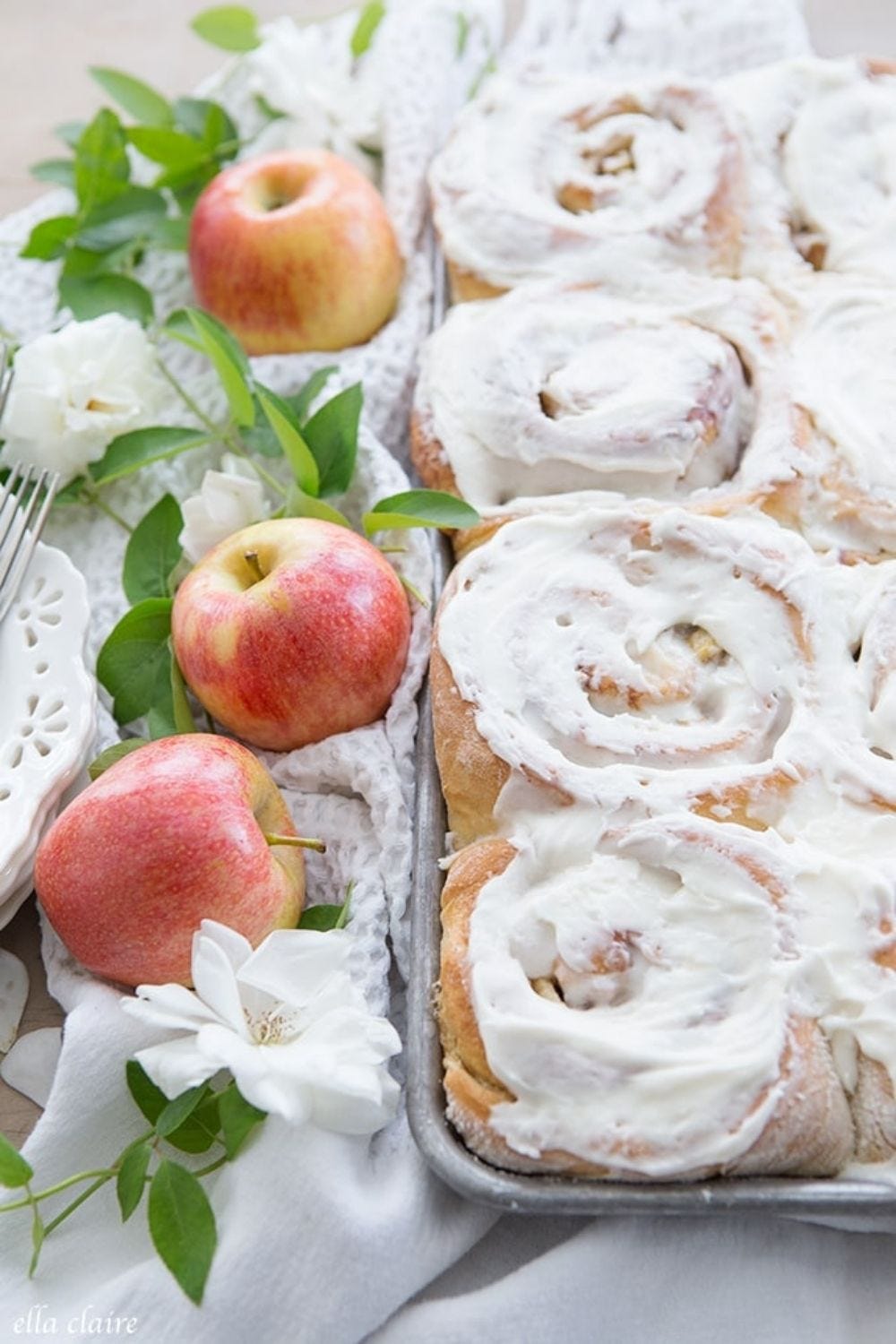