Lest you bristle at the idea that we’re suggesting you’ve given a crappy gift before in the form of a digital picture frame allow us to defend our position, admit we’ve done the same, and offer not just one but two better alternatives.

Why Digital Picture Frames Are So Terrible

Digital picture frames seem like a great idea. It’s a picture frame that doesn’t hold just one picture but many pictures! How could it not be great? Except there are so many shortcomings that are difficult to overlook.

When I was helping to clear out my grandmother’s estate, among many a dusty thing on some old shelves in her utility room there were not one but two digital picture frames that well-meaning grandchildren had given her. Not plugged in, not in use, and not updated for ages. At the time my daughter was a teenager and the photos on the picture frame were from when she was a toddler.

And that’s the problem with pretty much every digital picture frame on the market. The cheapest ones are “dumb” units that can only pull pictures off an SD card or flash drive. That means the burden of updating the frame is a physical task that most likely falls on the gift giver—so it’s promptly going to be forgotten about.

More advanced ones like those from Nixplay do include Wi-Fi connectivity and even some semi-streamlined sharing services, but it’s still—quite honestly—really rudimentary and not very user-friendly.

They Require Subscriptions or Special Accounts

This is an extension of the difficult-to-update issue but it’s a big enough deal that it merits noting. Every different digital picture frame company that offers web-based updating via Wi-Fi has some sort of different account system or login.

So you have to make an account, maybe your giftee has to make an account too, and everybody in the family that wants to add to the account has to fiddle around with some SuperFrame account or make a login for RealPictureShare or whatever it is.

It pretty much becomes the picture-sharing equivalent of trying to get your relatives to stop using Facebook in favor of some other social media platform. They’re just not going to do it. There is strong inertia when it comes to platforms and having to sign up for yet-another-service.

And further, what do you do when the company folds or the previously free service is now premium priced because some startup company has a “Woah, this unlimited cloud storage thing is expensive!” moment?

Even if the company does allow you to link existing services like Facebook or Instagram to the digital picture frame, without the company servers mediating that connection it won’t matter.

Look, it’s not 2001 anymore. There’s no reason for low-resolution anything. People own 4K TVs and smartphones with resolutions so high you can’t even see the pixels without a magnifying glass.

Yet the vast majority of digital picture frames on the market have laughably small screens and even smaller resolutions. A dim 5×7 panel that doesn’t even have anything close to basic HD (1920×1080) resolution is a joke.

Really cheap digital picture frames have even lower resolution. You can still find some at the very bottom of the price scale with 640×480 resolution. Is it a skin-colored Rubik’s Cube or Timmy? At that resolution, you’ll never know. Your amazing iPhone photos will be reduced to dim pixelated trash.

There are three price points for digital picture frames and at every price point, you’re getting ripped off in a different way.

The dirt-cheapest of frames are under $30 and are total garbage. They have low-quality panels, low-resolution, they’re dim, they don’t connect to the internet, and they’re just overall trash that Grandma is 100% going to put on a shelf and forget about.

The mid-range frames cost between $80-200 and while the panel is usually better quality, they still have low resolution.

Premium frames can cost hundreds of dollars all the way up to thousands of dollars if you go big-or-go-home by purchasing one of Samsung’s “Art TV” picture-frame/TV combos. At least in that case you get a 4K TV, right? But from a gift standpoint, a $1000+ price tag puts that well beyond the “We’ll put this in the stocking for Grandpa.” territory.

Why the Chromecast Is the Perfect Digital Picture Frame

Let’s rip through our previous criticisms and highlight how the Chromecast solves those problems.

The Chromecast Is Easy to Update

I have Chromecasts on every television in my house and from the beginning, I’ve used them as digital picture frames via the Chromecast’s “Ambient Mode” which displays photos when the Chromecast is not in use.

The primary reason I use them this way is that they’re just so simple to keep updated. No extra services (which may, as we mentioned, fade away or become expensive). You just upload photos to a Google account. Sure a Google account is an “extra” service, but at this point, practically everyone has one, and signing up for one is free, painless, and useful for more than just digital picture frames.

Even better is that by simply using the free Google Photos app on your phone you can easily curate the photo albums. You can also take advantage of album sharing to invite friends and family to add photos as well as live photo albums where Google Photos auto-magically curates photos for you. What’s better than pictures of the grandkids? Auto-magically supplied photos of the grandkids.

You Don’t Need a Subscription

Although Google discontinued the free-unlimited photo storage option in 2020, you still get the base 15GB of storage (which is plenty for just picture frame photos).

If you need more storage you can upgrade your whole Google account to Google One—the lowest paid plan in $20 a year for 100GB of storage—if you want to be the host for Grandma’s photo collection. If you’re a Google product user, especially with a family, that’s a no-brainer because you can share your Google One storage with your family members.

In addition to subscriptions, part of the downside to using a dedicated digital picture frame company (and their service) is that you have no idea how long the company will be around and how long they will support the product.

The Chromecast line has been around since 2013 and the original Chromecasts still work fine. I have Chromecasts of every generation of the product somewhere in my house and while the new ones are snappier (because of better hardware) all of them work just as well as they did the day I bought them. I can’t say the same for the digital picture frames, Wi-Fi transfer SD cards, and other photo gear I’ve bought over the years.

In fact, if you feel like upgrading your old Chromecast, reusing the old one to serve up pictures for older relatives is a perfect way to get more life out of old hardware. You get the new one for snappy streaming and maybe even a little casual gaming, and they get one that is still perfectly suited to display pictures all day.

The Screen Is High Resolution

With a Chromecast the resolution is determined by the display it is attached to (as is the quality of the image). HD TVs have been around so long now that it’s a given your giftee has a 1920×1080 resolution television, if not a 4K television.

If you’re setting this up for an older relative you cannot go wrong with a bigger and brighter screen. Who wants to put on their reading glasses to see new grandbaby pictures? When it’s displayed at 40+ inches and at TV brightness, it’s easy to see everything even from across the room.

But you can pick up a Chromecast for $30 at full price and it’s frequently on sale for $20. There is literally no comparison between the quality and functionality of a Chromecast and a digital picture frame at that price point.

They’re so inexpensive, even, that if Grandpa comes back with “We love seeing pictures of the grandkids on the living room TV so much we wish we could see them on all the TVs!” you can make that happen. You can outfit half a dozen TVs with Chromecasts for less than the cost of a decent mid-level standalone digital picture frame.

All by itself, the Chromecast is versatile. Even if your giftee never uses anything more than the Ambient Mode, you can set it up to show them the weather, air quality conditions, and more.

They can also use it for streaming functionality to watch Netflix, YouTube videos, and more. Further, for a few extra bucks (and still less than a “good” digital picture frame) you can upgrade to a Google TV, which is like a supercharged Chromecast with a remote.

If you’re shopping for a relative that doesn’t have a smart TV but with whom you’d love to share your Netflix account or other streaming services this is a great option. For $20 more you get even more functionality and a physical remote that older relatives will likely be more comfortable using than a smartphone interface.

They Integrate Seamlessly with the Google Nest Hub

At this point, you might be sold on our argument but you’re sitting there thinking how your gift recipient really wants a little picture frame form factor and not a TV form factor.

Well, you’re in luck! Back in 2019, we named the Nest Hub as our product of the year at Review Geek for a myriad of reasons including how it was a better digital picture frame than actual dedicated digital picture frames. You might ask yourself why this article isn’t focused just on the Hub and the primary reason is cost (the Chromecast is so cheap) and scale (big pictures, lots of functionality).

But the beauty of it is that the very photo albums you sent up for the Chromecast’s Ambient Mode can be used for the Hub’s screen too. In fact, this is exactly how I have it set up at my house. Every Chromecast and every Hub shared the same pool of family photos so whether you have the TV on or you’re looking at any of the Hubs you see the same fun pictures. The Hub retails for $100 but is frequently on sale for $50.

The bottom line is you simply cannot beat the Chromecast—in terms of features, display quality, ease of use, or cost—by purchasing a digital picture frame. By breaking free of the idea that the digital picture frame has to be literally a little 5×7 or 8×10 frame sitting on a side table and embracing the idea that the TV is a perfect place to display all your beautiful photos, you (and your giftee!) can have a much better experience with brighter photos that are shared with ease. 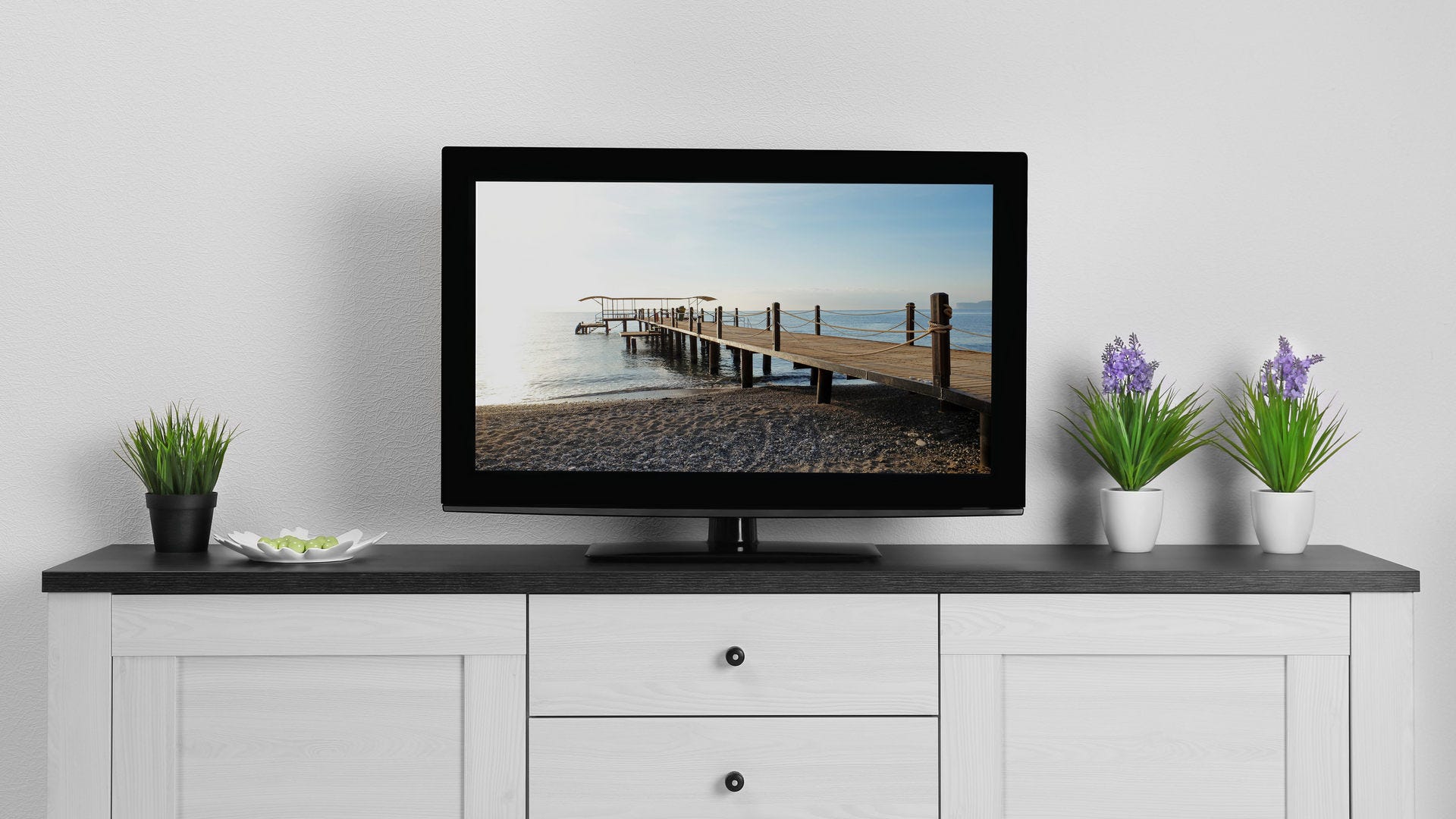