If you celebrate Christmas, you likely have a Christmas tree somewhere in your house right now (and if not, it’s time to get a move on!). But do you know why you have it, or where the idea came from? We were curious how this tradition started stateside, and here’s what we found out.

After a bit of research, we were able to uncover how the Christmas tree became a holiday decorating staple in the United States. We also learned how it’s evolved into the brightly lit, colorful, and sometimes, themed, creations we see today.

For those who’ve ever wondered “Why am I stringing dozens of lights around a plant?” we’ve got some answers for you.

Where Did the Christmas Tree Originate?

You likely won’t be shocked to hear that Christmas trees have been around for centuries, although not in the same form we see them today. The History Channel connects the practices of ancient Egyptians to the Christmas tree, explaining that worshippers of the sun god, Ra, would lay out palm branches on the winter solstice to celebrate his future return.

A similar celebration occurred in Rome. Saturnalia was the day the god of agriculture, Saturn, was honored, for which the Romans would decorate their homes and temples with evergreens.

RELATED5 Ways to Decorate Your Christmas Tree with Food

As for the Christian tradition, Time reported there are records of greenery—specifically holly and ivy à la the famous carol—being used as décor for the holiday as far back as the 15th century. There are also several myths associated with greenery, including one that claims Martin Luther saw pine trees as a representation of god’s goodness.

However, Christmas trees as we know them today appear to have originated in Germany during the Middle Ages. In Judith Flanders’ book, Christmas: A Biography, she explains that, in 1419, a guild in Freiburg, Germany, put up a Christmas tree and others were decorated with apples, thread, straw, nuts, and pretzels.

This popcorn and cranberry garland is reminiscent of early Christmas tree décor.

How Did Christmas Trees Come to the U.S.?

The German connection to Christmas trees is partially responsible for the tradition making its way to the U.S.

RELATEDShould You Add Fertilizer or Bleach to Your Christmas Tree Stand?

Initially, trees were highly frowned upon by religious groups, like the Puritans. In the mid-1600s,  they even created laws in New England to punish those who put up trees or similar décor. However, in the 1700s, Germans in Pennsylvania had community trees for the holidays, and, by the 1830s, the first trees began popping up in homes.

It was mainly one famous German who helped expand this tradition throughout the U.S., though. In 1848, an engraving of Queen Victoria and her husband, the German-born Prince Albert, decorating a Christmas tree was published in the Illustrated London News.

The image was reprinted in Godey’s Lady’s Book, a popular women’s magazine in the U.S. at the time. When American women, many of whom idolized Queen Victoria and Prince Albert, saw this, the tradition took off.

Add some traditional ornaments to your tree this year.

How Did the Tradition Develop?

Once the tradition of Christmas trees was widely adopted in the U.S., the decorations were usually more natural ornaments, such as nuts, seeds, fruit, or dyed popcorn. Some people also handcrafted ornaments to include with the edible items.

Soon, however, German ornaments were being imported into the country. Made of hand-blown glass and lead, these became so popular, Woolworths was selling $25 million worth of them. As the ornaments grew in popularity, so did other decorating materials, like tinsel, wool, and even silk.

These are similar to the DIY ornaments of the past.

So what about the lights? Well, you can thank Thomas Edison for those. No, really, and it’s not just because he actually invented the light bulb. Edison also created the first strand of lights and placed them around his Menlo Park, New Jersey, laboratory to create the first light display.

Light your tree in the traditional colors of the season.

People didn’t jump on the lights as quickly, though. Due to a mistrust of electricity, the trend didn’t quite take off until electric companies got involved. In 1903, General Electric offered preassembled string lights, which made the practice more accessible to the masses, as it no longer required expensive wiremen to set them up in homes.

Then, in 1917, Albert Sadacca, whose family owned a novelty lighting company, recommended selling Christmas lights in stores. Soon after, he and his family founded the National Outfit Manufacturers Association, which became NOMA Electric Co., the main name in Christmas lights until the 1960s.

We decorate our modern Christmas trees with just about everything we can possibly fit on them. However, that wasn’t always the case. Now that you know where this iconic holiday decoration comes from, why not add some more traditional bobbles to your tree this year? 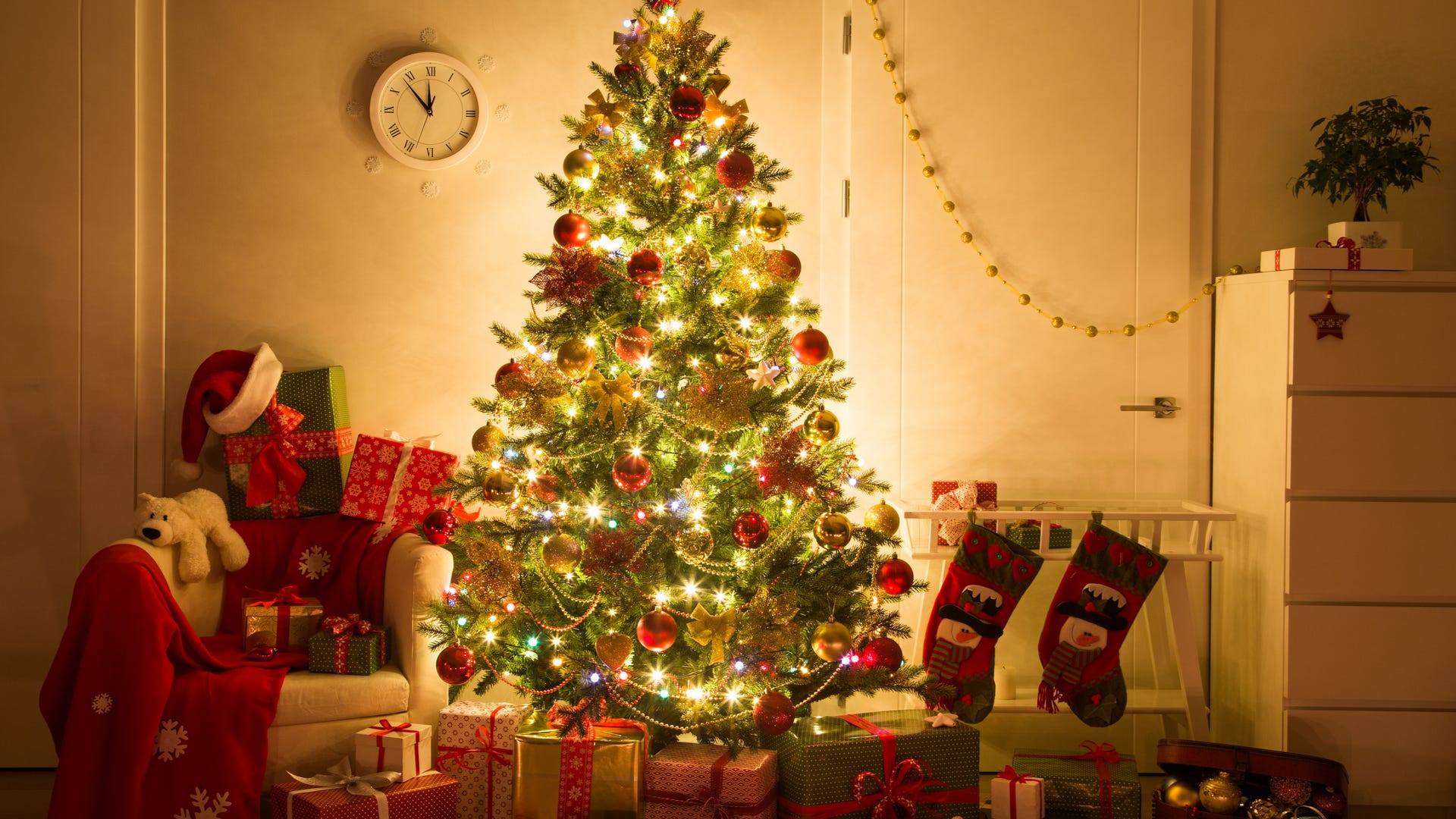