If you think you’ve aged out of party games, think again! We’ve revamped some Halloween tricks and treats for the 21 and older crowd. So, grab a costume, an adult beverage or two, and let’s have a grown-up good time!

You might have outgrown the standard balloon toss, and games like Spin the Bottle may have lost their thrill. Whether you’re looking for a game to break the ice, or one that’s more than fun with an icy beverage, we’ve got it!

We came up with nine spooky games to fill your FrightFest. All are best played in costume, and some might leave your guests genuinely terrified, but that’s okay. Because if there was ever a time to eat, drink, and be scary, it’s Halloween.

Bobbing for apples is a classic harvest festival game. Of course, adults can play with the traditional fruit, but wouldn’t it be more fun to bob for something a bit less innocent?

There are two easy ways to turn this one into 21+ entertainment. You can buy a bunch of miniature liquor bottles (the kind you get on planes). Throw them into your tub or barrel with the apples and water. When a guest comes up with liquor instead of an apple, he has to take a shot.

Alternatively—and slightly more stealthy—is the shot-in-the-apple approach. For this, dig out a small hole in the top of the apples. Fill them with a shot of liquor, such as Fireball, and set aside. Give them a little time to absorb the liquor, and then float the spiked apples and let the games begin!

Or “haunted,” or “scary,” or whatever you’d like the game to be. The idea is to create a “cursed phrase” that ties in with Halloween. This game lasts the entire party and—be warned—it can get intense. Be sure to let all guests know the phrase when they enter. A sign works well for this if you won’t be greeting everyone at the door.

For a twist, hand out inexpensive, colored beads at the beginning of the party. If someone hears another guest speak the curse, they can take that guest’s beads. The guest with the most collected necklaces at the end of the night wins the game.

This one takes a little organization, but it’s a great way to get the party going. Have guests form teams and give them a Halloween-themed scavenger hunt. But, instead of limiting the hunt to stationery items, add “tricks.” Things like “Mourn over a (fake) skeleton loud enough to attract attention,” or “Try on a teammate’s costume,” are sure to entertain.

Let guests know they have to take a picture with their phones as a group with each item or dare. Be sure to award a prize for the most creative group photos, not just for the first team.

This is one everyone can play together, regardless of the size of your party. Assign someone to be “It” and make sure everyone has a drink. Next, have all the guests stand up. The person who is “It” turns around, so her back is facing the other guests, and asks, “Zombie, Witch, or Ghost?”

In response, everyone picks their favorite. For zombies, guests place their arms straight out in front of them, like a walking zombie. Ghosts lift their arms to either side in a wiggly motion—you know, ghost-like. Those who want to be witches place their hands overhead at a point in the shape of a witch’s hat.

The “It,” without turning around, calls out her choice. Whichever group she names has to sit down and take a drink, and they’re out for the next round. The game continues until only one person is left standing.

If you’ve ever wrapped someone in toilet paper, you know this game. In teams of two, guests must wrap their partner in toilet paper as quickly as possible. A judge then determines the winning team.

To make it a bit more challenging, guests must hold a drink in one hand the entire time. Be sure to play this one outside, or on a drop cloth—the propensity for spilled drinks is high!

Sort of like Russian Roulette with shots, the host or hostess has all the power. He or she creates a tray of colored shot glasses. Half of them are real, and booze heavy, and the other half is straight-up juice. The party host then walks around and asks, “Trick or treat?” of each guest.

King’s Cup has become a college drinking classic. While the rules vary, the general concept is the same. Assign an action to each number in a deck of cards. For example, if a guest draws a three, it might mean he can “give a drink” to anyone playing. If you draw a queen, it might indicate all the women must drink.

Then, fan the deck of cards around the “King’s Cup” in the center of the table. Instead of a royal-worthy chalice, though, use a plastic, leak-proof, pumpkin. Any time someone draws a King, she can pour all or part of her drink into the pumpkin. The person stuck with the last king or the last card (depending on which rules you decide to use) has to drink the Pumpkin King’s cup.

This is another one that’s extra fun for the host. Fill bowls with items that feel gross to the touch. Cold, cooked pasta is always a good bet, as are lumpy Jell-O, frozen grapes, peeled hardboiled eggs, and boiled hot dogs.

Cover the bowls so your guests can’t see what’s in them. Then, have everyone take turns reaching their hands in and guessing what’s inside. Give prizes to the best guessers, and drinks to the worst.

This one’s the ultimate ice breaker! Write down every villain you can think of on index cards. As guests enter the party, tape a card to their forehead without letting them see the villain you’ve assigned them.

To guess which villain they are, guests have to ask each other yes or no questions like, “Could you kill me with a stake through the heart?” When the answer is no, they have to drink; a yes gets them one step closer to getting that annoying card off their heads.

Party games aren’t just for the kiddos—they’re fun for adults, as well! Playing drinking games at Thanksgiving dinner might not be appropriate, but Halloween is the perfect occasion for such things.

Whether you booze for apples or pay homage to the Pumpkin King and his cup, we’re sure these party games will give you a wicked good time. 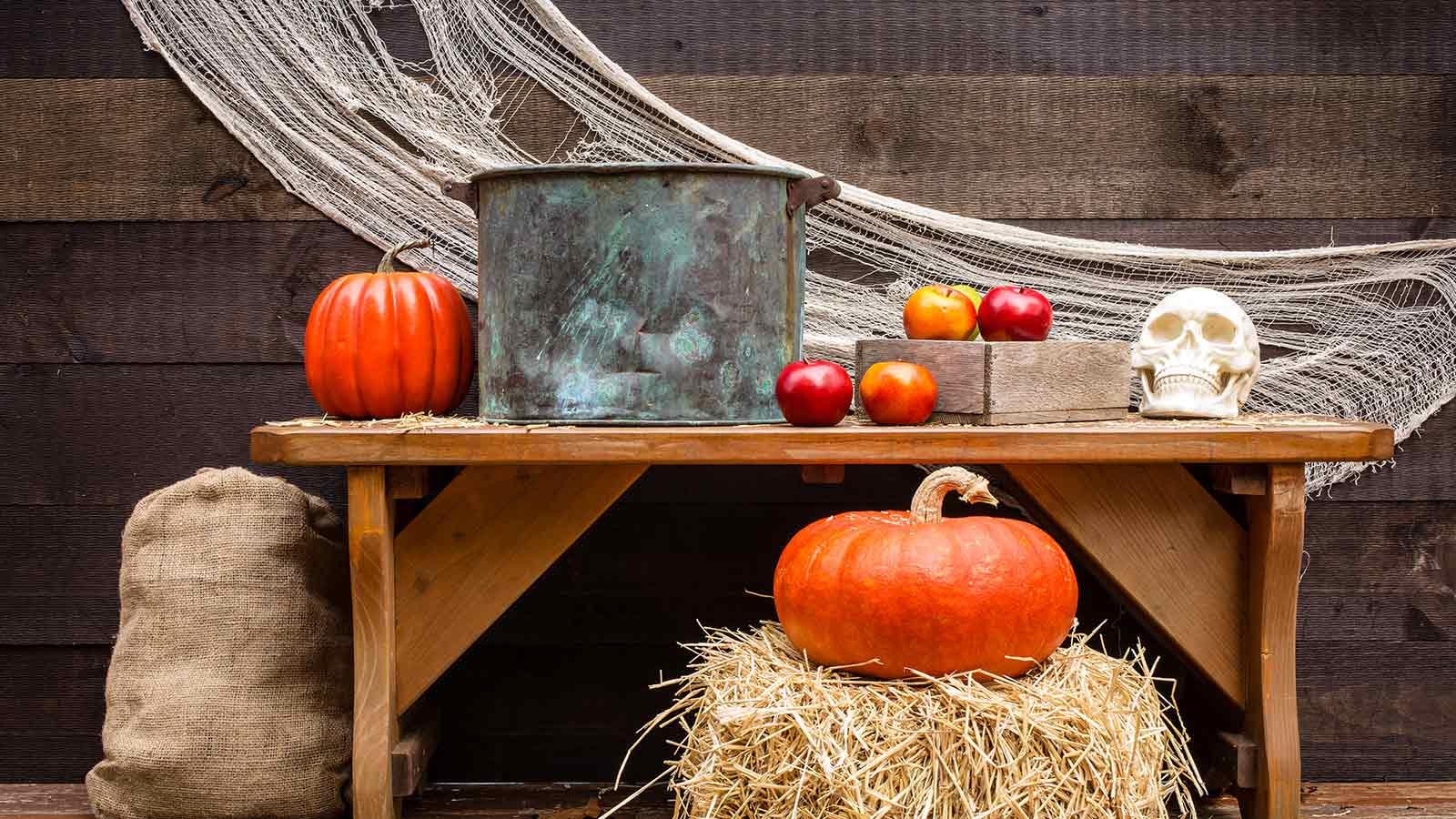