You fans of Freddy Krueger and pals of Pennywise have probably chosen your Halloween scary movie line-up. Whether it’s a Dawn of the Dead double feature, or the original Scream, don’t forget a creepy cocktail to match your movie mood.

If there’s one thing that goes perfectly with movies that make you scream, it’s a similar-themed cocktail. And we’ve got one for each of the spooky classics on your list. So, let’s put those mixology skills to work and whip up a spirit-filled beverage to match your spooky movie taste.

Honor Hitchcock’s scary movie classic with the ever-iconic martini. But, be sure to make it bloodred with this recipe, which calls for grape juice and blackberry syrup.

We can almost hear the cries already…

Get the Recipe: The Spruce Eat’s Bloody Martini

A Nightcap on Elm Street

If you’re heading to Elm Street this Halloween, don’t risk falling asleep. The cold brew coffee in this cocktail is sure to keep the nightmares, and Freddy, far, far away.

Get the Recipe: Liqour.com’s Nightcap

Okay, so this one might be more cute than creepy, and you don’t really need a recipe. Just spike your coffee with whatever you want—we recommend Bailey’s or Kahlua.

Next, use black food coloring and a toothpick to draw ghostly scream faces on jumbo marshmallows. Float them in your mug and enjoy the show!

Dawn of the Dead Delights

You need to stay hydrated if you’re going to escape the zombie apocalypse! This double whammy of rum and rose, sweet and sour cocktail is sure to satisfy your thirst.

Get the Recipe: Thrillist’s Dawn of the Dead Cocktail

We never recommend drinking while pregnant.  But, if you happen to be carrying the spawn of Satan, we doubt it really matters.

If you’re planning a visit to the Overlook this year, don’t forget to pack the punch. You’ll need a little liquid courage if you want to tackle Kubrick’s labyrinth of terror, let alone what lurks behind the door to Room 237.

Pennywise used iconic circus treats to dazzle his young prey. So, he might lean toward something like this cocktail for his more mature victims. We’re not saying we’d follow a clown into a storm drain for a taste of cotton-candy vodka. We’re just saying it might be a tougher decision than you’d think.

Get the Recipe: The Cookie Rookie’s Magic Cotton Candy Martini

Edgar Allan Poe might not have written screenplays, but his poetry certainly inspired many a scary show. Whether you’re watching “The Raven,” or another movie inspired by Poe’s work, this dark, mysterious beverage is the perfect finishing touch.

Get the Recipe: She Keeps a Lovely Home’s Blackberry Raven Cocktail

It’s said that cats have nine lives. Bury them in a certain Pet Sematary, and they might get a tenth. What comes back from beyond the grave is seldom sweet, but this Bad Kitty cocktail makes facing it slightly less scary.

Get the Recipe: The Times’ Bad Kitty Cocktail

Perfect for a carriage ride through Sleepy Hollow, the smoked rosemary that garnishes this one will give you all the woodsy feels. If you want it to actually smoke, you can do that, too!

However, if your driver tells you the pumpkin on his head is just “part of the costume,” we advise you to find a different horseman.

Legend has it that La Llorona was abandoned by her husband and left to raise her children alone. Enraged and grief-stricken, she drowned her sons and was condemned for her crimes.

The recent film rendition is an excellent choice for your scary movie marathon, and this ghostly cocktail goes right along with it.

Get the Recipe: La Llorona Cocktail by Epicurious

Maybe you’re fascinated by the mind and behaviors of serial killers, or perhaps you just think Christian Bale has the body of a demigod. Either way, this All-American cocktail is the perfect beverage to sip while watching Mary Harron’s American Psycho.

Get the Recipe: Giggles Gobbles and Gulp’s Red White and Blue Layered Shot

Take a stroll through Sleepy Hollow, meander down Elm Street, and then spend the night in our good friend Norman’s motel. But before you do, be sure to prepare a beverage or two. You won’t mind the extra liquid courage—plus, it’s hard to scream with a dry mouth. 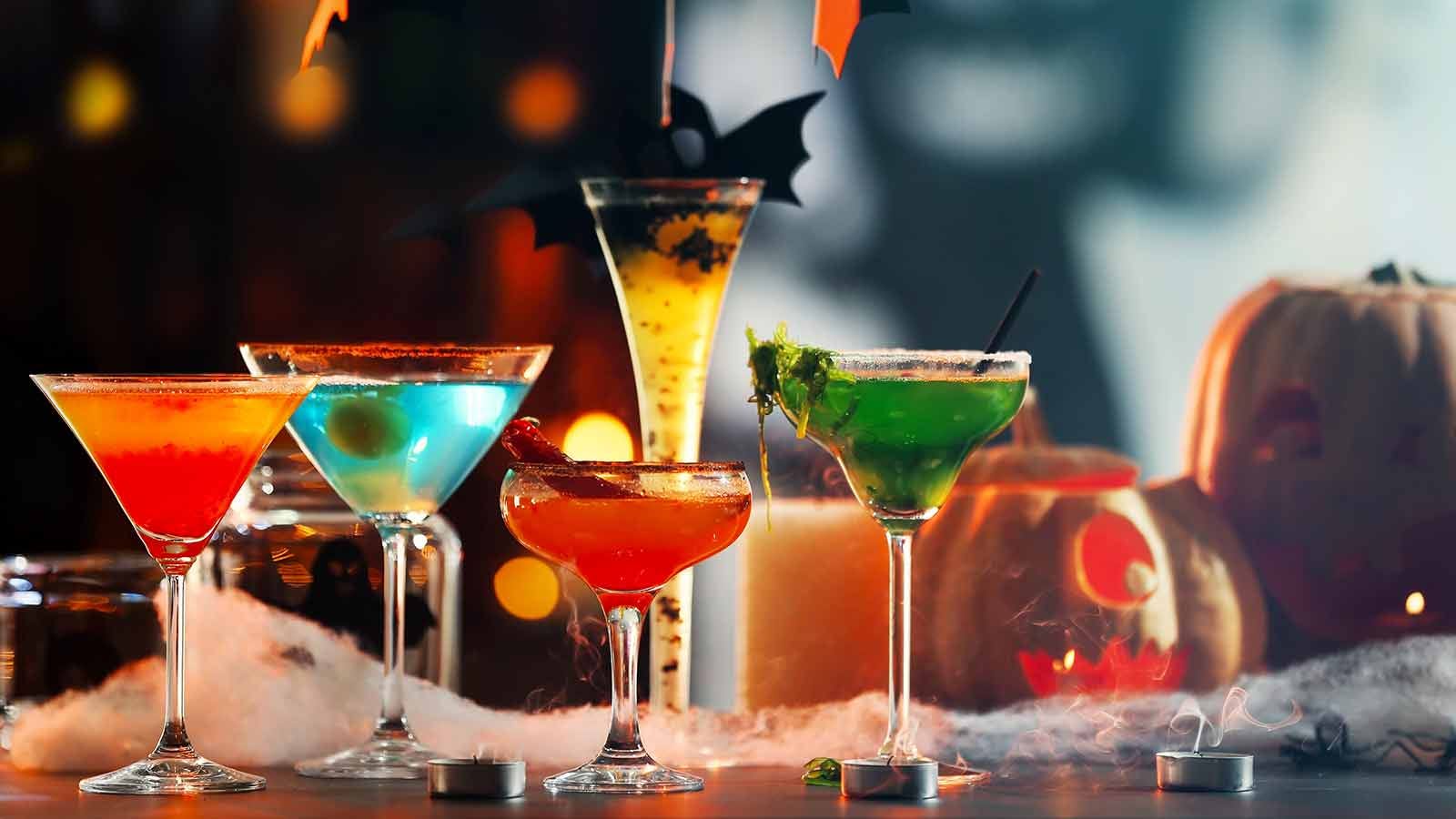