Halloween brings lots of great possibilities for laidback celebrations. There’s pumpkin carving, scary movie marathons, and candy binges for all ages. But this year, we’d like to add spooky board games to the list of Halloween traditions.

The board game renaissance of a few years back is still going strong, with lots of innovative games that are just as fun for adults as for kids. From Halloween parties to cozy nights in, games are a great way to connect with other people and test your wit and skills as you learn the new rules for each one.

Below we’ve rounded up top-rated games that cover a broad range of Halloween themes like haunted houses, werewolves, Lovecraftian terror, zombies, and apocalypse survival. Make your October just a little more festive and fun with these top game picks for Halloween!

Betrayal at House on the Hill
Mysterium
Eldritch Horror
Dead of Winter: A Crossroads Game
One Night Ultimate Werewolf
King of Tokyo
City of Horror

Betrayal at House on the Hill

Released in 2004, Betrayal at House on the Hill has now cemented its place as a board game classic. You’ll start by exploring a haunted mansion with the other players, revealing rooms that contain events and items. Eventually, one of you will stumble upon the “haunt,” which turns one player into a monster or traitor that the rest have to work together to defeat.

The game unfolds differently each time you play it, with lots of new haunts to unlock, so each new game is just as exciting as before. At first, it might seem complicated, but after playing through a time or two the rules will quickly make sense. If you’re not sure where to start but you know you want something fun, atmospheric, and with great replay value, this is it.

As far as board games (and especially Halloween-appropriate-themed games go) Betrayal at House on the Hill is popular enough that it’s often sold out—especially this time of year. If Amazon is low on stock, you can often find it at Target or ask your friendly local game store to order you a copy.

Avalon Hill Betrayal at House on the Hill, Green

When it comes to the haunted house motif, this game is a classic.

In Mysterium, one player gets to be a ghost, while all the rest are mediums. The ghost must communicate with the mediums to reveal how she was murdered. However, ghosts can’t talk, so the ghost sends messages in the form of “visions” or of illustrated cards that the mediums must interpret. Mediums work together to figure out who the murderer was.

Think of this game as sort of like Clue, but with ghosts. It’s laid-back, fun, and will challenge your ability to interpret visual clues in a very creative way. And as a bonus, if you happen to own the popular game Dixit or any of the expansions you can use the beautiful painting cards from that game as extra “visions” in Mysterium.

Between the beautiful illustrations and laid-back gameplay this one is sure to be a favorite.

Here’s one for the Lovecraft fans. Eldritch Horror takes the famous (and famously challenging) Arkham Horror game and makes it more accessible.

In this game, players must travel the world and work together to keep the planet safe from a terrifying Lovecraftian horror they discover. The game can be long and a bit complicated but delivers plenty of thrills to keep you going. Even if you don’t win and the ancient evil destroys the world, just think of all the fun you’ll have along the way! Better yet, if you fall in love with the game, there are plenty of expansions to keep the fun (and mystery) going for play after play.

Dead of Winter: A Crossroads Game

The Crossroads game series involves players working together for survival, while also completing secret personal challenges. The Dead of Winter version makes the concept perfect for Halloween, adding zombies that the players must team up to defeat.

You’ll have to figure out how to work together without knowing everything about each other. This is a great game if you want a fun way to confront deep philosophical questions about balancing personal desires with the needs of the group.

Want to fight both the challenges of the game itself as well as your fellow players? Dead of Winter is full of intrigue.

If werewolves are more your style, One Night Ultimate Werewolf has you covered. This game offers super-fast play with about 10 minutes per game, so it’s ideal for short attention spans or quick breaks between more complex games. (If you prefer a longer game, check out the classic Ultimate Werewolf version.)

In this game, players have one “night” to discover the secret werewolf among them. You’ll each get a role, and change roles several times before the final werewolf hunt begins. The cast of characters keeps it interesting—the Seer can provide insights, the Drunk can’t remember what they did, and so on.

The best part? Bézier Games has a free companion app for iOS and Android that runs the moderator function for you. If you’re familiar with werewolf-style games, you know somebody has to moderate the game (and not partake in the fun). With the app? No problem—everyone can play.

With its fast pace and thrilling conclusion, this game feels fresh every time you play it. If you like the format, try the game’s other versions, too, like One Night Ultimate Vampire.

This fast-paced game is easy to learn, easy to play, but full of surprises.

Lovers of huge, building-destroying monsters rejoice: King of Tokyo is here for you. In this game, you get to play as the giant monsters (or robots, or aliens) that battle with each other while reducing Tokyo to rubble.

The winner becomes King of Tokyo by either killing all the opposition or destroying Tokyo entirely (using destructive power measured in Victory Points). This dice game involves a lot of luck, but the simple play and fun artwork keep things exciting. To make it even more season-friendly, there’s also a Halloween expansion for the game.

This smash-'em-up showdown in Tokyo is perfect for a quick game with B-movie monster vibes.

City of Horror offers another classic zombie-themed game. This time, the players’ goal is just to survive as zombies encroach upon the city. However, not everyone will make it: Some might get sacrificed to the zombies so others can live.

As a player, you’ll be in charge of multiple characters, who all have their own special abilities. You’ll need to move your characters into different areas around the city, so they can put up zombie barricades and look for useful items. Lots of negotiation and strategizing between players makes this a game of wit as well as skill. The game is a little hard to learn, but it’s a good choice if you like a challenge.

It's a challenging game (and certainly not cheap!) but if you want a tough game that'll leave you double-crossing everyone, it's worth it. 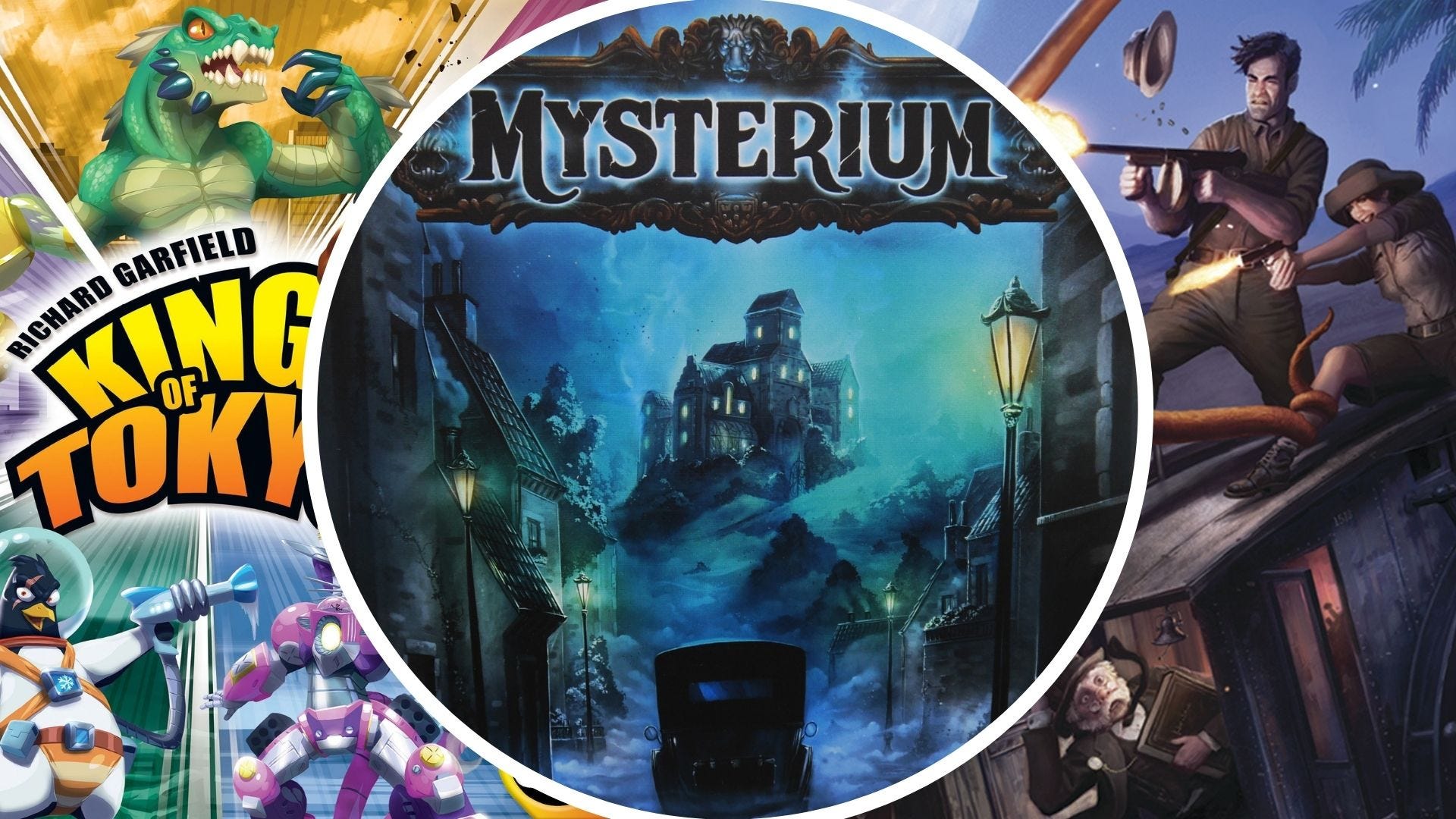