If the process of “seasoning” has prevented you from buying a cast-iron skillet, it’s actually much easier than you might think. We’ll show you how to season cast iron, as well as which oils to use for the best results.

Every now and then, a major cast-iron mishap might occur and leave you with a rusty chunk of metal. Combining heat and fat is key for getting a crusty skillet back into tip-top shape. Regular maintenance, coupled with minor touch-ups, will help you keep an easy-release coating. Here’s how to season and/or restore your cast-iron skillet, no matter what shape it’s in.

What Does It Mean to “Season” Cast Iron?

RELATED4 Reasons to Use Cast-Iron Cookware and Our Top Picks

“Seasoning” is pretty just a thin layer of polymerized oil, which is accomplished by rubbing oil over the entire pan, and then heating it in the oven. The heat causes the oil to break down and bond to the surface of the cast iron, creating a slick, easy-release coating.

A well-seasoned skillet will boast a somewhat glossy coating without any dry patches or greasy-looking spots. The more often you add oil and cook with it, the more seasoned it will become. Many say it’s a labor of love because it does take time and patience.

Properly maintaining a cast-iron skillet starts with a proper scrub down. And yes, you can use soap and water—don’t let those old myths scare you. As long as your cast iron is adequately seasoned and receives regular maintenance, a little dish soap and water won’t hurt it.

If you’re looking for a new skillet, we’re huge fans of Lodge skillets. They’re sturdy, well constructed, and just as attractive as their pricier competitors. There’s no better cast-iron cookware at an affordable price. We love both the enameled and non-enameled.

There’s one thing all forums and blogs have in common when it comes to cast-iron seasoning advice: fat and heat get the job done. The amount of heat versus the best type of fat to use? Well, that’s open to (some pretty heated) debate.

Your grandmother might’ve smeared Crisco shortening or good ole bacon grease on her skillet, while others insist on using only 100% pure, cold-pressed flaxseed oil. The key is finding oils that are low in saturated fat and have a high smoke point.

Below are three of our favorite options:

Pricier than some other oils, but creates a fantastic seasoning.

Both vegetable and canola are excellent (and inexpensive) options.

How to Perform Routine Maintenance on Cast Iron

To keep your skillet in the best shape possible, you’ll want to keep up with some routine maintenance. This just means washing your skillet shortly after you’ve used it, while it’s still a bit warm.

Warning: While lathering it with some suds is fine, you should never soak a cast-iron skillet in soapy water. It will strip away your hard-earned seasoning and require a major tune-up.

How to Do a Minor Touch-Up

Some regular maintenance will keep your skillet from needing a touch-up, but occasionally, a minor rehab will be required. You’ll know it’s time if you notice a bit of damage or rust starting to develop.

Brad from Bon Appétit suggests using some coarse kosher salt and water to fix small amounts of rust. Salt is an excellent, non-abrasive way to remove stubborn spots and rust. Just check out the video above for step-by-step instructions.

Will remove damage without scratching your cast iron.

For scrubbing away that rust.

How to Do a Major Seasoning Overhaul

Someone might think they’re helping you out by washing and air-drying—or even worse, soaking—your cast-iron cookware. While well-intentioned, this act of kindness will require that your skillet go through a more intensive form of rehab.

No worries, though—even the rustiest chunks of metal can be resurrected, and we’ll show you how. First, just gather the following items:

The easiest way to scrub away all that rust.

Abrasive yet mild enough to wash your cast iron. The scouring side will work, too.

For just the right amount of suds.

You need plenty of these for a good seasoning session.

Warning: You should never use a brillo pad (like the S.O.S. brand above) on cast-iron cookware for regular day-to-day cleaning. It’s for removing rust only.

After you’ve gathered your supplies, follow these steps to rehab your cast iron:

Now that you’ve washed your skillet and removed all that rust, it’s finally time to season it!

How to Season a Cast-Iron Skillet

Whether your skillet just needs a quick scrub down or a major restoration, after you’ve washed and dried it, it’s seasoning time! Follow these steps to season your cast-iron skillet:

Step 1: Preheat your oven to 450 degrees Fahrenheit, and grab your oil and paper towels. You’ll also need some dish soap and a scouring pad (the back of a sponge works, too).

Step 2: If you haven’t yet washed your cast-iron skillet do so now with a drop of dish soap and some warm water. Dry it thoroughly with a clean, highly absorbent dish towel. Place it in the oven for a few minutes for additional drying, and then remove and let it cool completely.

Step 3: Apply about one tablespoon of oil to your pan and massage it in with a few paper towels. Be sure the oil reaches all the nooks and crannies, including the handle, exterior, and bottom of your skillet. Go back over your skillet with a few fresh paper towels to remove the oil you just added and any additional thin layers of rust on the surface.

Step 5: Apply one more tablespoon of oil, and again, carefully massage every square inch of your pan, including the bottom, handle, and sides. Use some fresh paper towels once again to remove any thick oil and ensure only a very thin layer remains.

Step 6: Place your skillet upside down in the preheated oven, with a sheet of aluminum foil underneath to catch any oil drippings for about an hour. Turn off the heat and allow your cast-iron skillet to cool in the oven over the next few hours, and then remove.

Step 7: Repeat steps 5-6 at least once or twice more to achieve a really sufficient seasoning.

Continuous cooking and regular maintenance will keep your cast-iron skillet or cookware in top-notch shape, so it will last for generations!

If you’ve shied away from investing in cast-iron cookware because it sounded too high maintenance, it’s time to change that! These easy steps will help you maintain (or resurrect) that reliable old skillet. After you’ve followed these steps, it’s time to cook up an amazing meal in your newly seasoned pan! 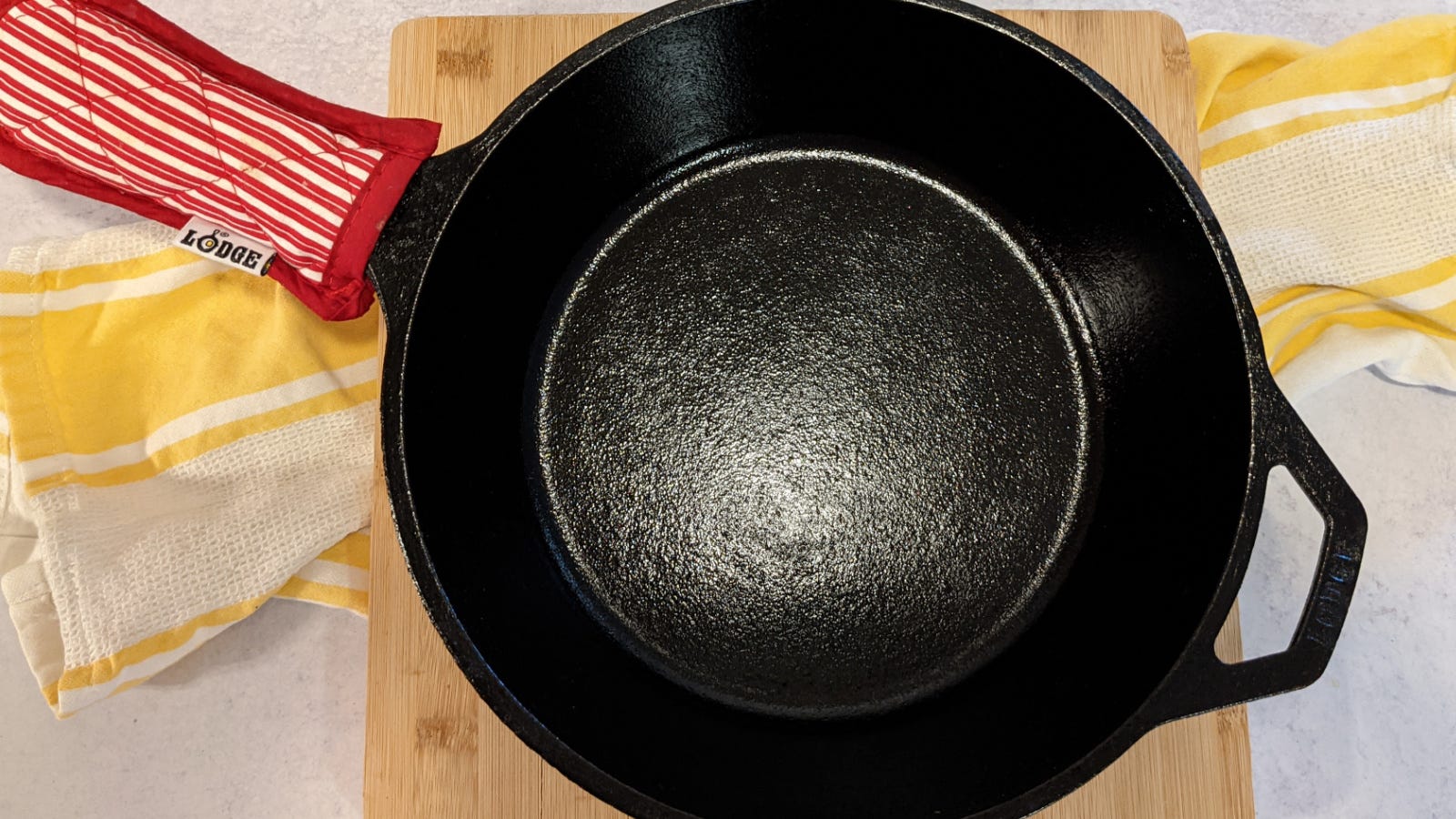 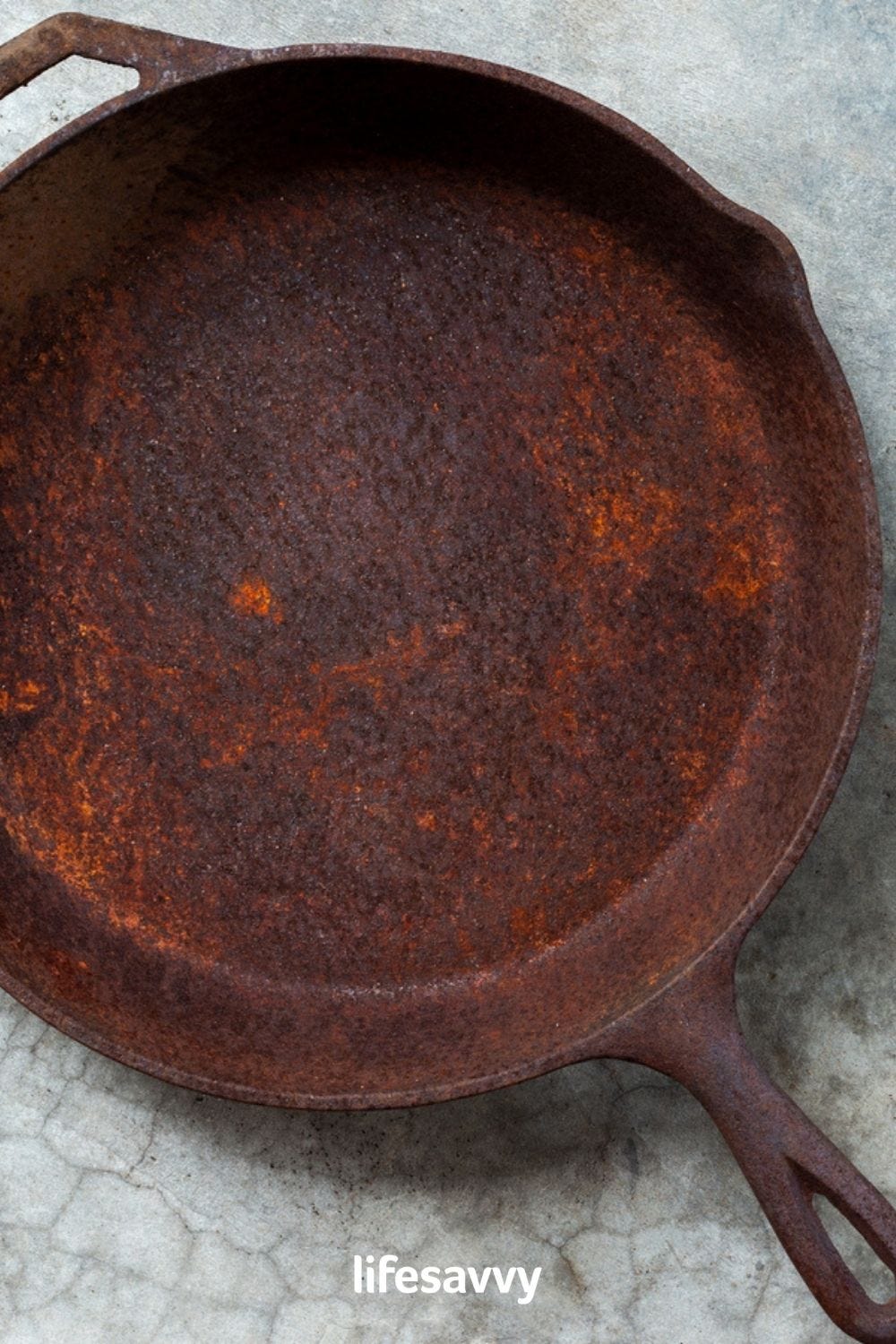