Your beloved waffles boast an impeccable structure filled with individual pockets meant for trapping sweet maple syrup and melty butter. While nothing quite beats the originals, savory waffles are a real game changer, and we have 15 recipes to prove it!

Think sharp cheddar cheese, rich hollandaise sauce, fresh herbs, and salty slices of bacon. Adding a few savory ingredients to those morning waffles will win over even the sweetest of sweet tooths.

Before drizzling savory gravy and cheese sauce all over your pocket-filled breakfast treats, you’ll want to start with a complementing batter fit for those toppings. While vanilla-flavored waffles dotted with sweet essences taste lovely with fruit and whipped cream, it doesn’t mesh quite as well with the savory stuff.

Crumbly cornbread-, crispy potatoe-, and even cheddar/bacon-stuffed waffles all taste delicious when topped with a rich egg yolk or knob of melted butter.

Before you grab all your ingredients, though, you’re going to need a waffle iron, and nothing gets the job done quite like this professional model by Cuisinart. Simply pour your batter, flip the iron, and enjoy a gorgeously leavened waffle in just minutes.

After you have everything you need, it’s time to stuff some waffles!

Extra-sharp cheddar and earthy chives make their way into these rich and decadent waffles. You’ll love the subtle grit from the cornmeal and bits of cracked black pepper in each bite. Once you’ve added your choice of toppings, you’ll appreciate these bad boys even more!

Carolyn over at Umami Girl also recommends adding a dollop of sour cream or a fried egg on top. Serve these up with a bit of butter on top, as well, and a side of crisp bacon.

Get the Recipe: Umami Girl

Cornbread wars rage across the country as regions debate which kind (sweet or savory) is the best and most traditional version. If you’re like us, your preference might vary by the day or according to whatever your taste buds are craving at the moment.

When you’re yearning for something unique, though, these cornbread waffles are sure to hit the spot! Crunchy niblets of corn kernels concealed in the batter are discovered with each delicious bite. Feel free to top these with butter, avocado, shredded cheese, or even some hot n’ hearty chili.

Get the Recipe: The Gingered Whisk

According to ChefSteps, you can cook pretty much anything in your waffle iron, including bacon, eggs, and more!  If crispy, fried potatoes always win you over, you’ll love these golden latke-like potato waffles.

Dip them in ketchup, or top ’em with some sour cream and green onions. No matter which way, you serve them, everyone is sure to rave about these crispy delights.

Get the Recipe: Olga’s Flavor Facory

Cheese and bacon are a heavenly match on anything. However, have you ever topped your waffles with this super-savory combo? You might’ve never guessed it, but these popular ingredients taste just as nice when trapped inside some thick, fluffy waffles.

The briny bits of bacon mixed with the vanilla flavor of waffles create the perfect sweet-and-savory mash-up.

Get the Recipe: Evolving Table

You’ll love how easily this recipe comes together. With just a few cups of frozen shredded hash browns, along with some ham, onions, and cheese, you’ll have a breakfast to sigh for in just minutes! These oh-so crispy hash brown waffles will also pair perfectly with eggs made your way.

Dip them in ketchup, or top ’em with some sour cream and chives. They also taste incredible crammed in an egg sandwich or used in place of bread. Talk about the breakfast of champions!

Get the Recipe: The Toasty Kitchen

Sometimes, just keeping it simple is the secret ingredient for any dish, including those morning waffles. And what could be easier than spreads? While some of these topping suggestions might seem a bit odd at first, you might discover an appreciation for them once you try them out.

Next time you fancy a batch of waffles, try smearing them with one (or a few) of these spreads.

Nothing quite beats the simplistic allure of plain old butter. Its perfect, creamy richness paired with that subtle edge of saltiness go hand in hand, making it an ideal match for toast, pancakes, bagels, and (you guessed it!) savory waffles.

Kerrygold is a European-style butter made with all-natural milk from grass-fed cows. It delivers both big-time flavor and texture, and we guarantee you’ll taste the difference.

Cream cheese is another classic schmear that tastes incredible on toast, bagels, and, yes, waffles. Don’t believe us? Just give it try.

Kraft’s Philidelphia Cream Cheese is the best-known brand thanks to its rich and delicious flavor. Whether you purchase it whipped or not, you’ll love the complementary notes when you spread it on a sizzling hot waffle.

A dollop of Daisy doesn’t have to be reserved for Taco Tuesday, and yes, it goes beyond baked potatoes and hot chili too. Add a sprinkle of fresh chives from your herb garden, and I call that “winner-winner waffle dinner.”

Sour cream will taste particularly excellent on your potato-filled waffles, but you’ll likely grow fond of it over your cornbread renditions as well.

Yes, you can also add a dollop of Daisy to those waffles.

Next time you’re intrigued by an international cuisine or recipe mashup, give these mini falafel waffles topped with hummus and tabbouleh salad a try.

They’re an inspiring idea for anyone interested in Middle Eastern cuisine or with a knack for trying new and exciting flavors.

Avocado and Everything Seasoning

Avocado and Everything Bagel seasoning teamed up several years ago, and this delicious duo is still leading the way when it comes to simple, healthy breakfast options.

Just what you need to spruce up your breakfast.

However, if you’re kinda over avocado toast, try adding those versatile green fruits to your waffles, instead!

Get the Recipe: A Wholesome New World

Once you’ve tried stuffing your waffle batter with salty ingredients or finished them off with some different spreads, we assure you, you’ll be inclined to take things up even further!

Smothering your waffles with thick, hearty gravies and sauces is a surefire way to win over a hungry man or woman’s heart, and below are five yummy options you oughta try.

Now, just think about how delicious those cornbread waffles we mentioned earlier would taste with a heaping spoonful of chili over the top. You can even finish them off right with some shredded cheese, sour cream, and even a few jalapeños if you like things extra-hot.

Get the Recipe: Tastes Better from Scratch

If you’re an eggs benedict kind of person, then perhaps this waffle eggs benny is more up your alley. A few hot-off-the-iron waffles topped with a poached egg and some hollandaise sauce, and you’ve got a real winner of a breakfast or brunch.

Get the Recipe: Dinner with Julie

With St. Patrick’s Day coming up, we’ve got the perfect idea for that leftover corned beef hash: put some on your waffles! Hot seasoned potatoes intermingled with crisp pieces of briny corned beef pair flawlessly already, so there’s no reason why you can’t add a waffle to the mix.

Get the Recipe: Sugar and Soul

Sausage gravy over a few hot biscuits is a hearty breakfast, for sure. But next time you’re in the mood, try spreading some of that gravy over a waffle instead. The juicy chunks of sausage will find their way into those waffle pockets with ease.

It’ll soak in, too, for a well-rounded savory taste in every bite. Throw some eggs on top, and you’ve got one heck of a tasty breakfast or brunch.

Get the Recipe: Homemade Food Junkie

Fried chicken and waffles is a southern classic that’s well-loved by many folks. If it’s something you’ve never tried, well, now’s the time. If you love fried chicken and warm, fluffy waffles, you’ll wonder why you never thought this one up yourself!

Everyone at the table will adore the sweet, spicy, savory trio in this recipe.

Get the Recipe: Well Seasoned Studio

Along with pancakes and good ole bacon and eggs, waffles are one of the most beloved breakfast and brunch foods. But if you’re ready to shake things up a bit, these savory recipes will have you experimenting in the kitchen and enjoying some delicious results in no time! 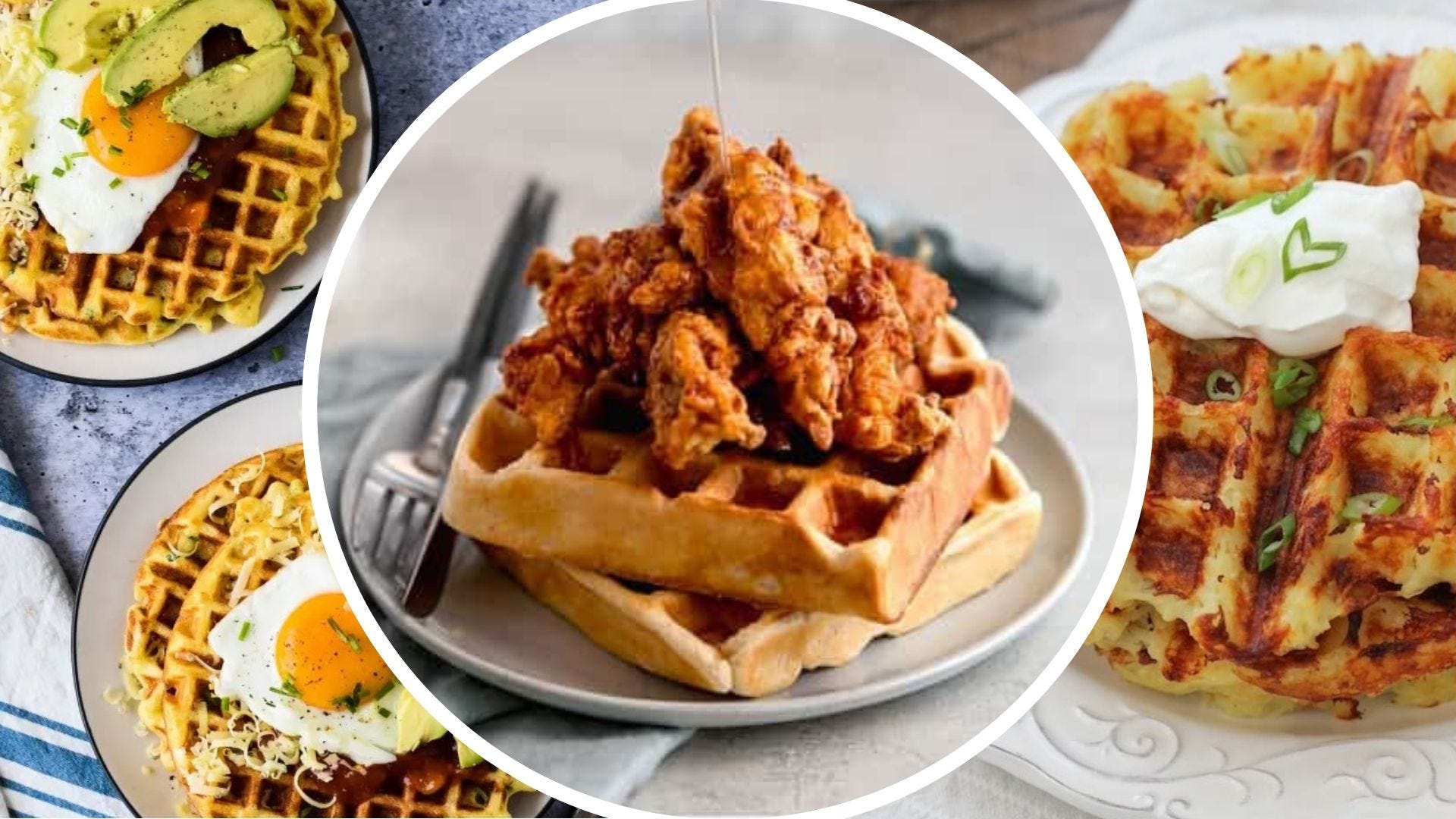 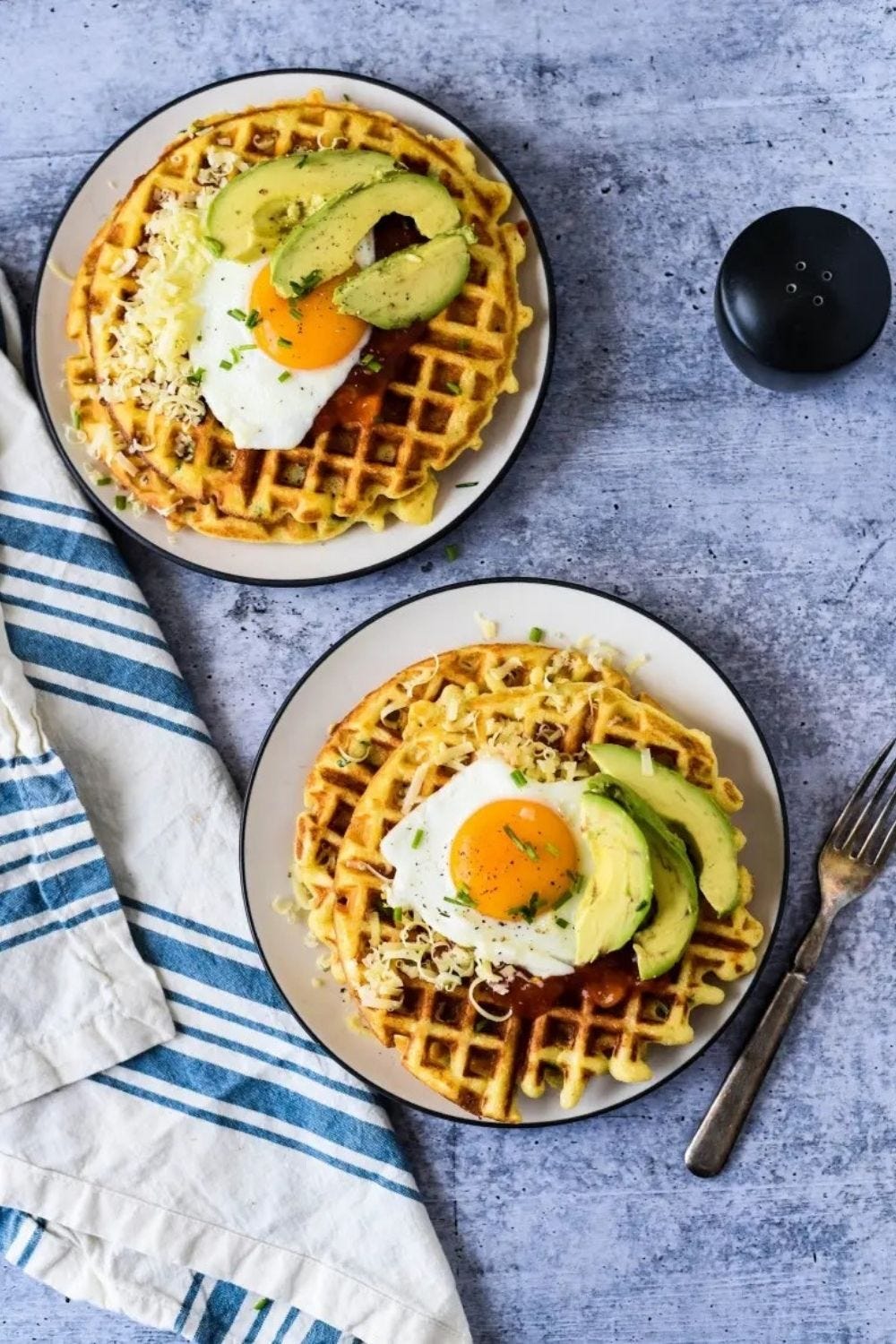