Maybe it was a wedding gift, or a Black Friday Sale find. Regardless, it’s probably been sitting in the back of your pantry far too long. Dust off that panini press and put it to work, with one of these ten epic panini recipes.

Paninis might be our favorite form of sandwich. Thin, crispy, and filled with all sorts of decadent ingredients, they’re one of the most accessible vessels for kitchen creativity. Whether you fill them with veggies or layer them with cold-cuts, they’re honestly hard to get wrong.

This combination panini-press, griddle, and grill is perfect for both panini sandwiches and more.

Still, some are better than others. And that’s why we’ve put together this list of ten tried-and-true panini recipes. So plug in that panini press and scroll down; we’re sure we’ve got a sandwich to suit your fancy!

With layer on layer of various vegetables, all with different textures and flavors, it’s hard to get bored with vegetarian paninis. Add in all the options for cheese and spreads, and the combinations are endless!

Caprese Panini
Caprese flavors are simple as is. So, to make a panini that really stands out, use the highest quality produce you can find. Using heirloom tomatoes and fresh mozzarella will make all the difference in this sandwich!

Eggplant-Mozzarella Panini
If you’re a fan of eggplant parmesan, then this is your perfect panini. It’s essentially the same thing but in sandwich form. You don’t have to serve it with marinara for dipping, but we highly suggest you do.

Maple Roasted Apple-Brie Panini on Cinnamon Raisin Bread
Sweet cinnamon raisin bread, tart green apples, and rich, buttery brie combine in this panini. It’s an explosion of contrasting flavors and textures that could only come from a chef like Bobby Flay. We’re not sure if it’s dinner or dessert, but we know we’re taking more than one bite!

Portobello, Cheese, and Arugula Panini
When creating a meatless meal, it’s always a good idea to use mushrooms. Mushrooms are the meatiest of vegetables, both in terms of texture and flavor. So, putting them in a vegetarian sandwich is a no-brainer, especially alongside melted cheese and peppery arugula.

Mac & Cheese Panini
Okay, so this one’s a bit decadent to be sure. But, we can’t imagine a sandwich that better speaks to our five-year-old-hearts than this one. The macaroni does an excellent job of holding in the cheesy sauce; every bite becomes a burst of creamy, cheesy goodness.

Meat, cheese, bread, and creamy spreads create a heavenly one-bite combo. It doesn’t matter if you’re craving chicken or daydreaming about bacon; put it in a panini, and you’re sure to be satisfied.

Chicken Pesto Panini
Pesto and paninis go together like pepperoni and pizza. They just work. Maybe it’s the pop of bright green in between the pressed layers of crusty golden bread, or perhaps it’s the fresh, herbaceous flavor against the richness of melted provolone. We’ll let you decide.

Prosciutto, Pear, and Goat Cheese Panini
Putting fruit in a panini might be out of your comfort zone. But, this autumn-inspired take on the crispy sandwich is one you won’t want to miss. Sophisticated goat cheese saddles up alongside sweet pears and richly, cured meat to create a lunch you won’t soon forget.

Salty-Sweet Bacon Panini
Bacon has been playing the sweet side of the field more and more often, it seems. Cover it in chocolate, throw it on your PB&J, or better yet, make this apple butter, bacon, and Brie panini. The sweet and salty combo is pure perfection in sandwich form.

Get the Recipe: My Recipes- Salty, Sweet, Bacon Panini

Muffuletta Panini
The muffuletta is a traditional sandwich made with cold meats or seafood and tangy olive spread. The combination of acidic olives against rich bread and cheese is incredible, and more than worth a trek to Louisiana for a taste of the original. But, if a southern vacation isn’t in your immediate future, this melted take on the classic will surely suffice.

Get the Recipe: 15 Spatula’s Muffuletta Panini

Roast Beef & Onion Panini
Roast beef and onions are a classic pairing. Throwing them into a panini isn’t all that inspired. But, sometimes, things are famous for a reason. This mix of umami-rich beef and sweet, caramelized onions is guaranteed to make a great lunch.

If you’ve got a panini press hiding in the back of your pantry, it’s time to dig it out! The filling options are endless. And, putting together a panini hardly requires a culinary degree. So, whether you’re craving something sweet and fruity, or hoping for something with a meaty middle, a panini is sure to satisfy. 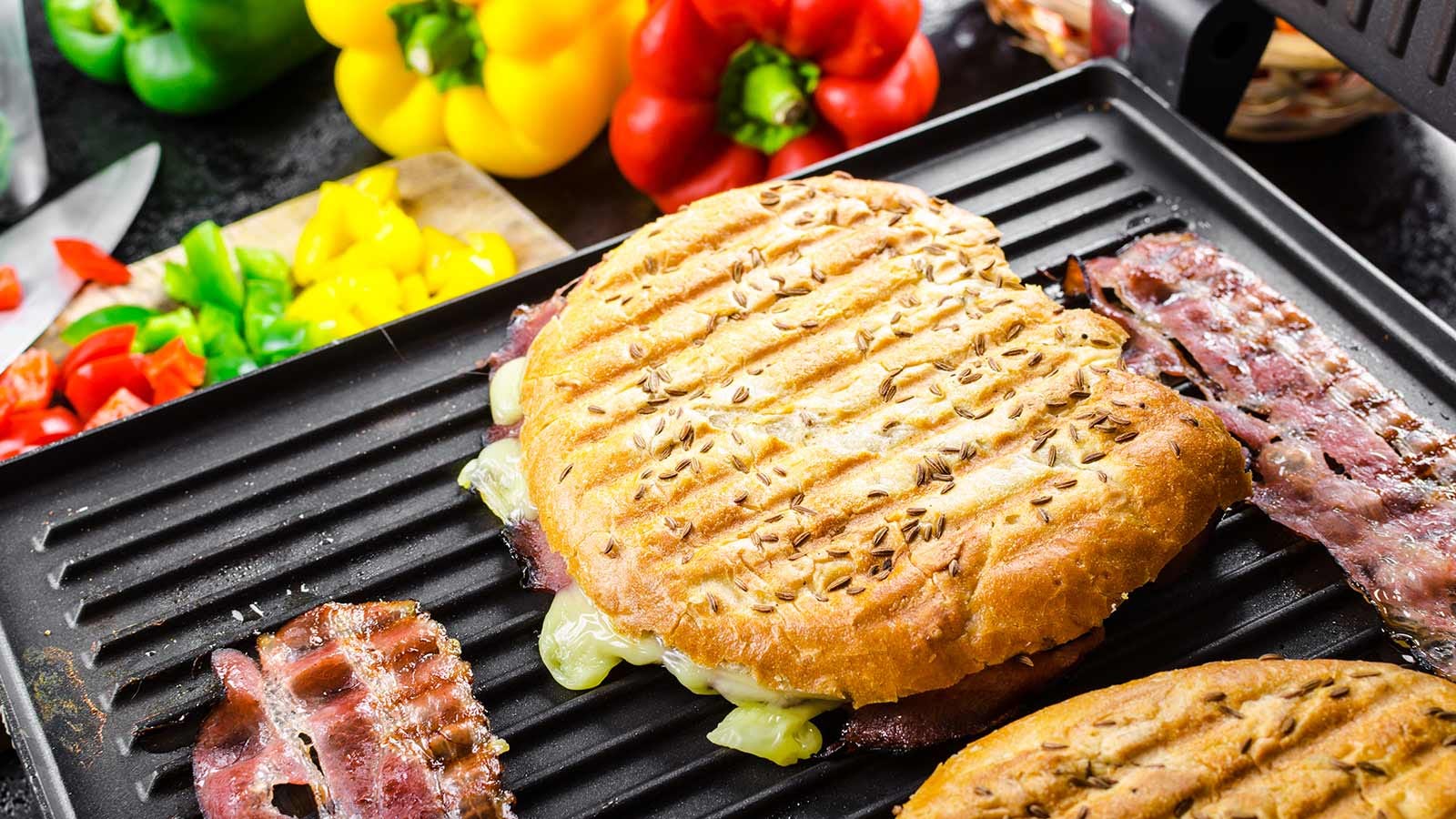