Ever find yourself waiting in line at the McDonald’s drive-thru, wondering whatever happened to the Arch Deluxe or your fave Snack Wrap? While McNuggets and Double Cheeseburgers will (most likely) forever have a place in the lineup, there are several former menu items that McDonald’s has never brought back.

Of course, there’s no way of knowing which foods Ronald McDonald will present in the future. However, we know for sure that these 11 menu items were discontinued and, at least for now, are things of the past.

One thing most Americans have in common is a love of food, and pizza, in particular. So, it’s no wonder that McDonald’s added the McPizza to its menu in the 1980s. Unfortunately, this bright idea came with a few flaws, which failed to satisfy the company’s expectations.

McDonald’s spent years developing a quick-cook oven to meet its fast-food promises, but renovation costs and long prep times (11 minutes to be exact) meant the McPizza didn’t live up to the hype.

By 2015, there were only three locations still serving McPizza at the drive-thru. Evidently, you can still find this discontinued(ish) item in Orlando, Florida.

RELATEDHere's How to Make a McDonald's Shamrock Shake At Home

McSpaghetti was yet another failed 1980s attempt at an Italian dish. While this pasta-in-a-box continues to win the hearts of consumers in the Philippines, it never did that well in the United States.

McDonald’s is so good at selling burgers and fries, why dabble in pasta at all? Evidently, the texture of McSpaghetti was spot on, but the sauce was declared to be too sweet and needed some salt for balance. In one decade, the McSpaghetti was born and discontinued.

As a 1990’s baby, I have fond memories of relishing McDonald’s’ juicy (and oh, so crispy) Mighty Wings—but almost as quickly as my taste buds discovered them, they were taken off the menu.

It appears McDonald’s customers deemed the wings to be too pricey and a bit too spicy. They also looked too much like McNuggets with bones and for all of these reasons, were slashed from the menu about a decade later. But their memory shall live on.

In 1994, McDonald’s hired fine-dining chef, Andrew Selvaggio, and tasked him with developing a more sophisticated burger with a “distinctively adult taste.”

Selvaggio worked in the company’s test kitchen to design a premium burger that featured a new sauce, lettuce, seasoning, and even new buns. While some did love this dressed-up burger drizzled with special sauce, others found this “burger with the grown-up taste” less than exciting

If you have fond memories of the Arch Deluxe, you can replicate it at home with this copycat recipe.

Get the Recipe: Top Secret Recipes

The Snack Wrap and Chicken Selects

Also on the long list of dropped McDonald’s menu items is the Snack Wrap—one of the chain’s most beloved and dearly missed foods. Launched in 2006, the Snack Wrap was intended to meet the demand for a low-calorie menu option that could also be eaten on the go.

RELATEDKeep Your McDonald's Fries Warm with This Easy Hack

The simple Snack Wrap featured a Chicken Select (McDonald’s version of chicken tenders), some lettuce, cheddar cheese, and a drizzle of ranch or honey mustard all enveloped in a flour tortilla. It was easy and low-cost to make, and super-popular.

Unfortunately, the company had to remove Snack Wraps from the menu due to the long tortilla-preparation times. Likewise, Chicken Selects were discontinued in 2013, but then brought back in 2017 as Buttermilk Crispy Tenders before finally getting the ax in 2020 due to COVID-19.

If you want the Snack Wraps to make a comeback, you can sign the Change.org petition and share why you think they should be put back on the menu.

If you’ve never heard of the Hula Burger, don’t fret—you aren’t missing much. This sandwich, comprised of pineapple and cheese on a bun, was invented to compete with the Filet-O-Fish to increase sales during Lent.

However, the crispy fish sandwiches dominated then and still continue to sell well in the U.S., but not so the Hula Burger.

Next time you grab a Filet-O-Fish, keep in mind it was almost a hot grilled pineapple and cheese sandwich (thank goodness the Hula Burger flopped). Of course, if you’re a fan of grilled pineapple, you can replicate the sandwich at home.

Remember that magical time when Mcdonald’s had “All-Day Breakfast”? Mickey-D devotees loved being able to get crispy hashbrowns or McGriddles any time of day. Alas, that all came to an end in 2020.

Evidently, the chain put the kibosh on it to “simplify kitchen operations.” Along with removing all-day breakfast, McDonald’s also recently decided to permanently yank its three Egg and Cheese bagels (which you could get topped with bacon, sausage, or steak) from the menu.

The Breakfast Bagels also featured another iconic item you might be missing.

Perhaps an even more cherished delicacy (yea, we’re calling it that) than All-Day Breakfast was McDonald’s Breakfast Sauce. You used to get a serving smeared on your Breakfast Bagel, but the sauce was discontinued along with its beloved bagel buddies, and there’s no return in sight.

Just the thing you need to dip your nuggets!

The secret recipe added just the right touch of flavor to your morning bagel, and many people (myself included) loved that strange yellow sauce. Luckily, there’s also a copycat recipe for this delicious breakfast topping.

Get the Recipe: Jango Recipes

You’d think McDonald’s would have been selling hot dogs all along, like many other burger-and-fries chains. However, Ray Kroc, McDonald’s CEO from 1967-73, had some serious opinions about them.

Evidently, Kroc swore off the idea of selling hot dogs because “there’s no telling what’s inside the skin.” Nevertheless, the McHotdog was sold in various Midwestern markets, including Pennsylvania in the U.S., Toronto, Canada, and Chile. It was only available for a limited time in all of these, however.

Grinding it Out: The Making of McDonald's

How Ray Krok transformed a small restaurant into the largest fast-food chain in the world.

McDonald’s doesn’t mess around when it comes to marketing their fish items. And every time a new fish product is released, there also seems to be a catchy jingle to go along with it.

Remember those hilarious commercials for the Filet-O-Fish? In this instance, “Fishy Fishy” became the new harmonious theme for the Fish McBites, which were released and discontinued in 2013. Unfortunately, the song probably didn’t help.

McDonald’s Onion Nuggets, which resembled little deep-fried onion petals served with a dipping sauce, were another menu item that failed.

There’s only so much you can do with the ever-popular McNuggets. The spicy version has done as well as the latter, but we can’t as much for the onion rendition.

While they were added to the menu in 1975 to please vegetarians, they just never sold well, and McDonald’s doesn’t have any plans to bring them back. If you feel compelled to fight to bring them back, though, you can sign the petition.

Over the years, McDonald’s has added many new items to its menu. While not all of them were a success, most found at least a few die-hard devotees. So, whether you’re still missing All-Day Breakfast or longing for the return of Snack Wraps, just keep your eye on that menu—you never know when an old fave might reappear. 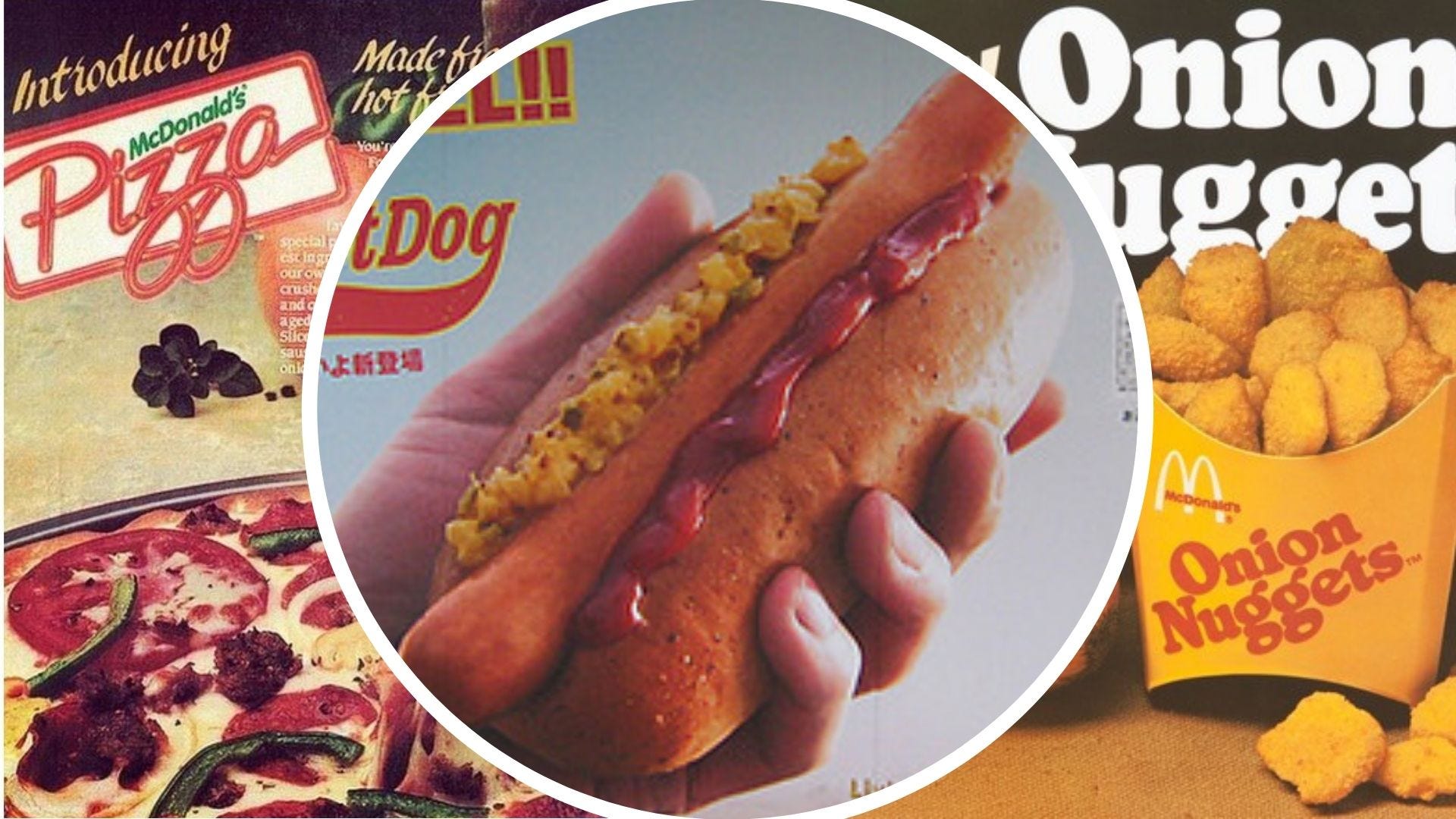 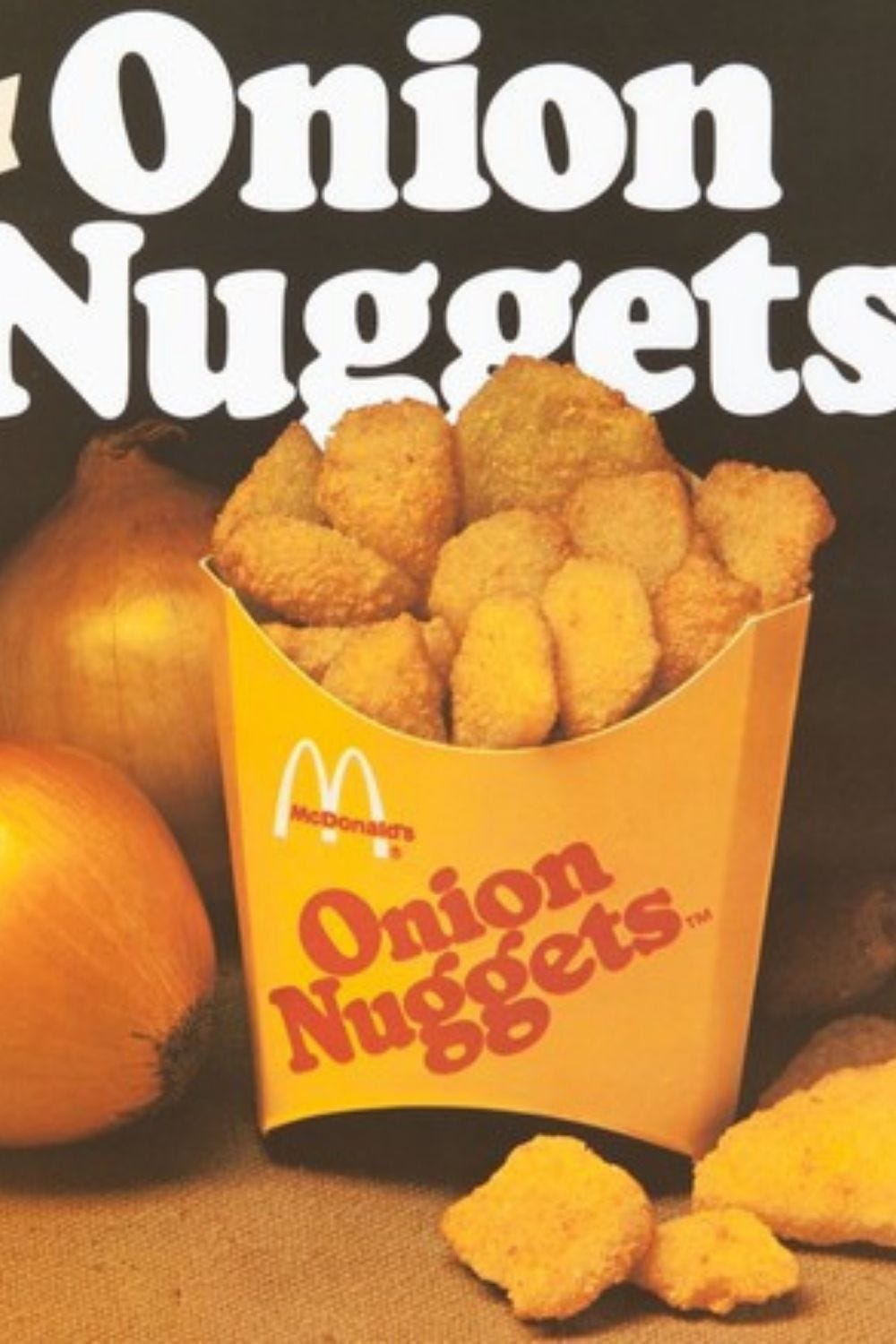