A little hot food in your fridge is okay, but stashing big hot pots there isn’t best practice. Instead, here’s how to cool your food safely before putting it in your fridge.

Bacteria on the foods we eat multiply under certain conditions. Luckily we can store our food in refrigerators, keeping the temperature at 40 degrees or less, which slows bacterial growth.

However, when we place huge portions of hot foods in, it takes more time for the food (especially the center) to cool down to safe temperatures. If that hot food sits at an internal temperature of above 40 degrees for more than two hours, it is considered unsafe.

How to Safely Store Hot foods

Bulky pots of stock, broth, or soup are all examples of large portions that should not be placed directly into the fridge after being cooked. Not only will it take much longer for that liquid to cool, but you can affect the temperatures of the cold foods around the large pot.

When you have massive amounts of soups, stews, or large pieces of meat or poultry, be sure to divide them into smaller portions. Place these smaller amounts into shallow containers before refrigerating to allow for faster cooling.

Although small amounts are considered safe to place directly into the fridge without cooling first, the most reliable practice is to cool food rapidly and then store it away. The goal is to ensure it reaches 40 degrees or under as fast as possible. There are a few ways to do this.

As you already know, dividing the food into small portions is a great way to help cool the foods faster. However, if this isn’t an option, you can also use an ice bath or ice paddle to help expedite the process.

In the ice bath method, place your large pot in a larger container filled will ice and water. You can also set a clean ice paddle directly inside of the large bowl of hot contents. Ice Paddles are made with sturdy food-grade plastics and are used to cool large amounts of hot food down before storing it in the fridge.

If you don’t have ice paddles, another great way to cool down a big batch of liquid (like that yummy broth you just made) is to fill zipper bags with ice and drop them in. Replace the ice as it melts and it’ll be fridge ready in no time.

And, of course, if it’s cold outside (under 40 degrees), you can let nature do your work for you.

Whichever method you use, just be sure to keep foods out of the danger zone. That means any foods that have temperatures of between 40 and 140 degrees Fahrenheit for more than two hours are considered unsafe. If meals are above 90 degrees, they shouldn’t sit out for more than one hour. 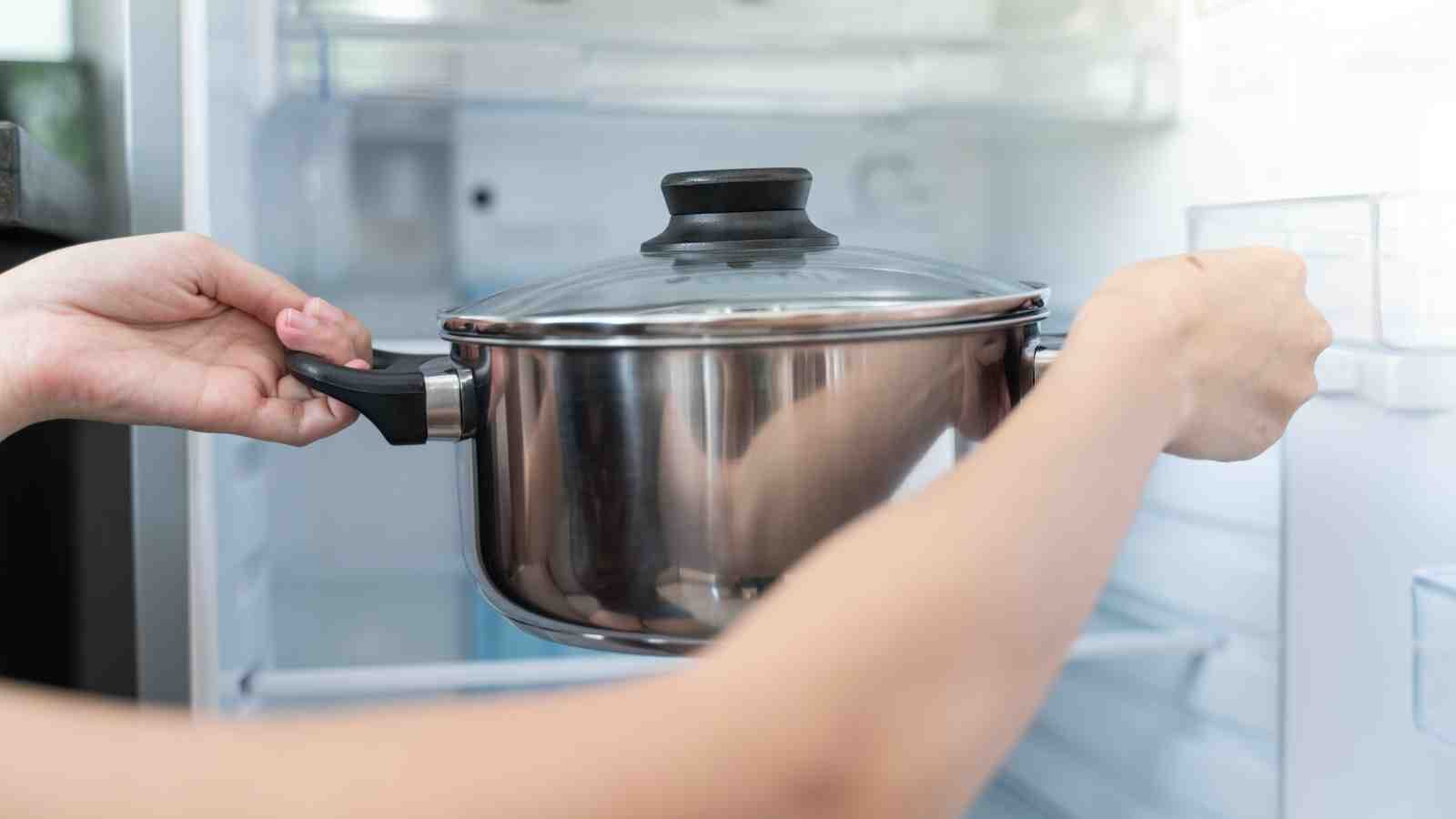