Boxed stuffing is one of those convenient premade components to Thanksgiving dinner that actually tastes yummy. But making it can be easy, too. Learn how with these tasty homemade recipes.

Sure, there’s a little more prep work involved in making stuffing from scratch, but the outcome makes each step in the process worth your time. If you’re looking for a way to use your Crock-Pot this year, we’ve got you covered. If you were hoping for a healthy gluten-friendly option, well, we found something for you, too.

But first, let’s cover some of the basics. Ever heard anyone refer to stuffing as dressing? Is there a difference between the two? If so, what the heck is it?

So, Are Stuffing and Dressing the Same Thing?

You’ve heard of the sweet versus savory cornbread debate, and of course, the sub versus grinder or hoagie arguments, but here’s a food fight that continues to furiously live on.

Stuffing is a seasoned mixture that is placed or stuffed inside of the cavity of poultry or other foods whereas dressing (also a seasoned blend) is cooked outside of the bird and never stuffed. Except for in your mouth.

The confusing part is that the two words are often used interchangeably because, like most food disputes, we find where you live makes quite an impact. So to puzzle you a little more, some people also choose to call it filling.

Whichever term you use at your table is up to you, but for the sake of highlighting the delicious recipes below, we’ve stuck with the terminology used by the chef behind the recipe. Let’s dig in!

Nothing beats a complementary combination of sweet and savory flavors. The apple and cranberry blend nicely with the browned sausage and fresh sage, rosemary, and parsley.

Whether you’re a fan of Granny Smiths or Honeycrisps, the recipe works just fine. Chop up some onion and celery, add a few other staple ingredients, and you’ve got yourself a delightfully fresh take on a Thanksgiving dressing.

Get the Recipe: Number 2 Pencil

Here’s the perfect stovetop and oven saver recipe that can be made up to 24 hours before the big feast. When you have so many other meals to cook, and a house to prepare, a Crock-Pot comes in handy.

This classic dressing recipe offers many tips regarding which type of bread work best, and how to dry the cubes before combining with other ingredients. Add in your favorite components, like sautéed mushrooms or dried cranberries, for an additional burst of flavor and texture.

Get the Recipe: Spend with Pennies

Enjoy this fluffy and buttery stuffing for a savory addition to your Thanksgiving plate. From pan-fried sausage to your favorite dried bread, the ingredients make for a traditional take on this side dish.

But have you ever tried putting white wine reduction in your dressing? While you can sub it out for broth, or leave it out altogether, the author of this recipe highly recommends trying it out. Sprinkle in some chopped parsley, sage, and rosemary, and you’ve got yourself a lovely meal that will stuff you up.

Get the Recipe: Cafe Delites

We’re all about fattening and delicious, especially when it comes to a quintessential side dish like stuffing. However, we also understand a healthy lifestyle is important to many.

So whether you stereotypically decide to hit the gym after the holidays, or you’re super into health and fitness all the time, we found this recipe for you. Another plus is that it’s a gluten-free option for people who aren’t able to stuff their faces with bread and other gluten-filled foods. We feel for you.

With three superfoods—walnuts, quinoa, and kale—how can you go wrong with this nutritional and gluten-free option? It might not scream traditional, but you’ll love the fresh and wholesome flavors.

Get the Recipe: Healthy Seasonal Recipes

Here’s the perfect example of what a southern-style cornbread dressing is like. The author even delves into the differences in the terms “stuffing” and “dressing.” You’ll love the traditional ingredients that create this sweet and savory filling.

You can even make this recipe up to a month in advance and freeze it for later. If you would rather make it closer to Thanksgiving, you can combine everything up to eight hours in advance and keep it in the fridge.

If you’re hoping for a yummy and fun way to make stuffing a grab-and-go item, then why not try these adorable stuffing muffins?

The sage and cranberries mixed with the dried bread cubes and other classic ingredients come together to make cute bite-size stuffing snacks.

Get the Recipe: Jerry James Stone 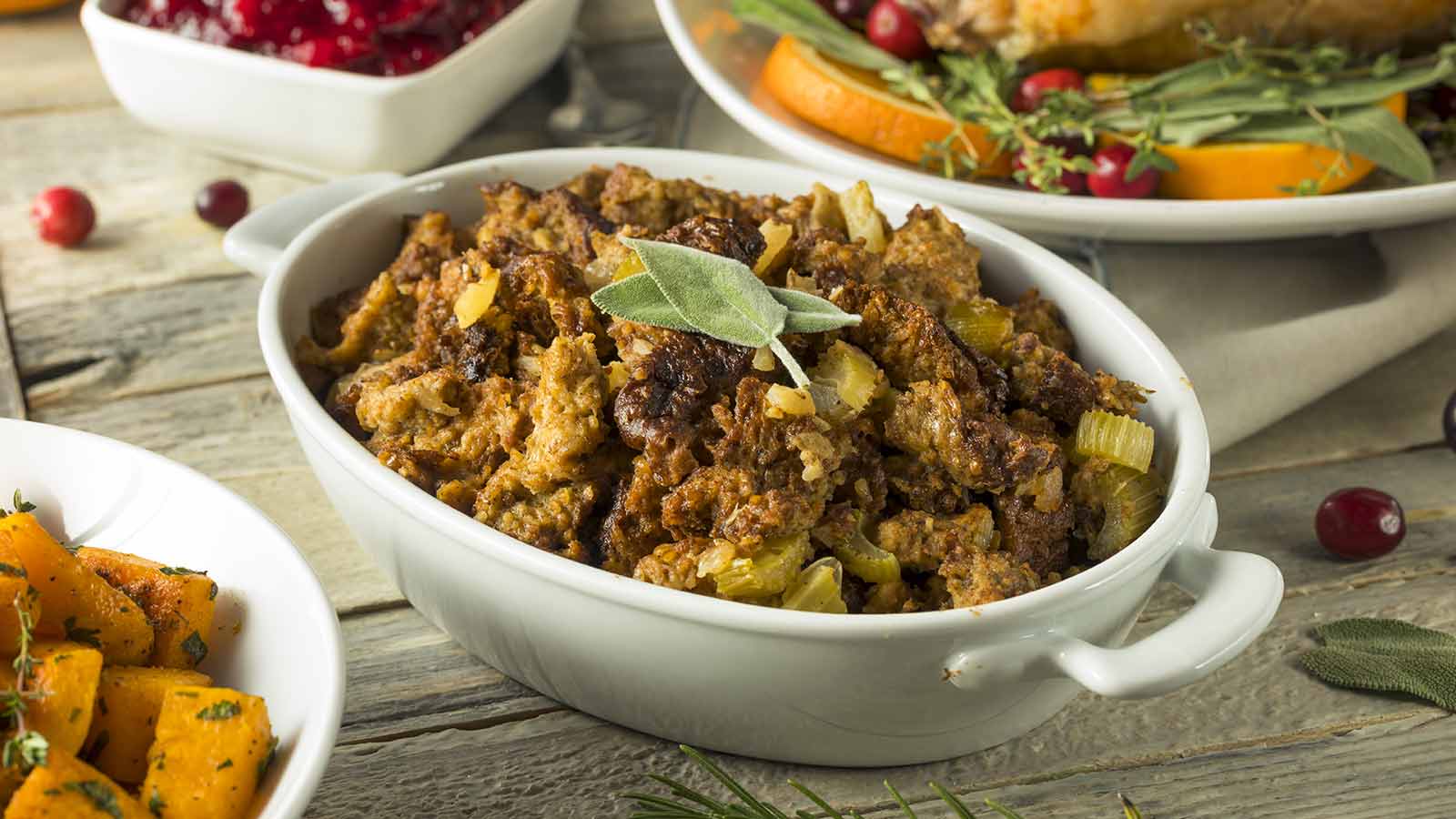