Seriously though, what the heck is a yam, and is it the same as a sweet potato? They look sorta the same at the grocery store, so what sets these two apart?

We’re sorry to break it to you—if you’ve been blissfully operating under the assumption that yam is just a different word for sweet potato—but a yam and a sweet potato are two completely different vegetables and, when properly identified, look quite different. Thanks to a little mistaken identity and marketing blunders, these tubers are commonly thought to be the same.

Most people think the terms “yam” and “sweet potato” can be used interchangeably due to being the same vegetable with two different names. However, this is not the case at all.

African slaves in the United States compared sweet potatoes to yams they had grown back home. After some time, “yam” entered the Southern vernacular and continues to be used as a term for sweet potatoes in the region even today.

Louisiana sweet potato farmers also wanted to differentiate these from the yellow variety back in the 1930s. So, they labeled the darker-skinned sweet potatoes as “yams.” After so many years, it stuck, and even grocery stores marketed them this way and continue to do so today.

Differences Between the Tubers

So if a yam isn’t just a darker sweet potato, what is it? Here are the differences between the two tubers.

Yams: You can find yams in most international or specialty markets, but they aren’t common in most North American grocery stores. Yams originate in Africa and Asia, but most varieties are still grown in Africa.

RELATEDUbe: What Is It (and Why Do Cooks Love It)?

When looking at a yam, you’ll notice a brown bark-like appearance that’s a bit more difficult to peel in comparison to the sweet potato. The flesh usually has a pale yellow shade, but some also have a white, pink, or purple hue. Yams can grow extremely large, too; we’re talking up to an impressive five feet long.

When biting into a yam, you’ll notice they’re less sweet and taste a little dry and starchy. So while you think you’re buying these tubers at a grocery store, we’re sorry to say, American Marketing has fooled you.

Sweet potatoes: These tubers aren’t even from the potato family; in fact, they are from a root from a vine in the “morning glory” family. Sweet potato has smooth skin with moist flesh that varies in colors—they can be white, yellow to orange, and even purple, much like a yam.

Sweet potatoes with dark skin and orange-colored flesh are typically sweeter and softer and found at most grocery stores. These are likely the ones you eat around the holidays. Light-colored sweets have a drier texture and are not as sweet. Purple sweet potatoes are known to have a sweet chestnut flavor. 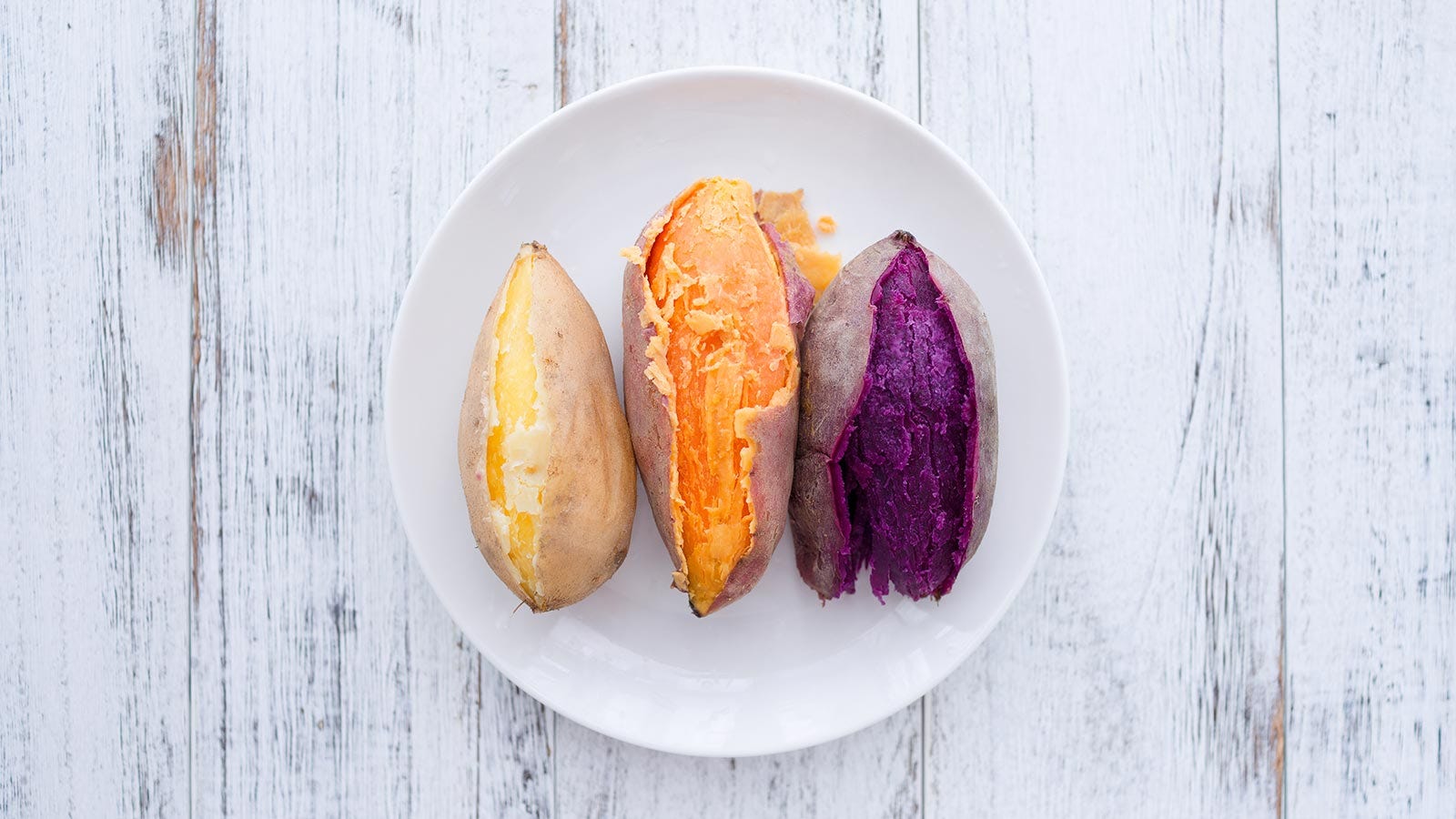