Christmas is right around the corner, and it’s a perfect time to settle in and watch your favorite Christmas movies. Before getting too cozy, try making one of these meals that pair perfectly with each film.

Food nostalgia is quite a powerful thing, especially around the holidays, which is likely also why we remember such iconic food scenes from Christmas movies. Here are seven favorites with corresponding recipes for you to chow on while watching.

Warning: Movie spoilers below—while we picked a pile of classic films, if you see the title of a film you haven’t watched yet, you might want to skip that section and save the recipe for your second viewing!

In this hilarious film, the main character Buddy is a human raised by elves in the North Pole who, naturally, sets out to find his real dad—a businessman living in New York City.

Along the way, Buddy’s innocent and immature behavior often leads to much chaos, but he still manages to spread Christmas joy along the way. Once welcomed into their home, during supper, Buddy asks for maple syrup to go on top of his dinner.

In no time, Buddy pulls out a small bottle of pure maple syrup from his sleeve and pours in on top of his spaghetti dinner.

Later he makes the same meal for the family and enjoys a plate covered with pop tarts, marshmallows, chocolate syrup, and so much more. If you are daring enough to try spaghetti pasta topped with all the sweets you can think up, then here’s a recipe for you to live your best Elf life.

Get the Recipe: TasteMade

A Christmas Story is a fantastic movie that has won the hearts of millions since it was first launched in 1983. Ralphie Parker narrates this film as an adult as he reminisces on his fond childhood memories.

Among other hectic events throughout the film, the most memorable is when a few neighborhood dogs run into the Parkers’ home and tear apart Christmas dinner. After such a tragedy, the family decides to eat out at a Chinese restaurant.

The waiters attempt to sing Christmas carols and bring out a roasted duck with its head still attached. Once Ralphie’s mother notices the head, she screams, then giggles to herself as Ralphie’s father claims the duck is smiling at him.

Without hesitation, one of the waiters takes out a large knife and chops the head off. The family cheers and begins to eat the new meal before them. Try making Peking duck if you plan to watch this popular Christmas movie.

The Nightmare Before Christmas: Pineapple Upside Down Cake

In The Nightmare Before Christmas, Jack Skellington loses his love for Halloween and the ghoulish festivities that go with it. In his wandering through the haunted woods to clear his mind and get back in the Halloween spirit he finds the portal to Christmas Town—and promptly becomes fixated with bringing the spirit of Christmas to Halloween Town.

Unfortunately, sharing Christmas with his Halloween Town citizens doesn’t work, but Jack is too wrapped up in his enthusiasm over the matter to notice. The much-awaited winter Holiday is nearly ruined until Santa comes in to save the day and deliver gifts to the children of Christmas Town.

As a news reporter informs all the citizens that Old Saint Nick is moving at “supersonic speeds” to save Christmas, pineapple upside-down cake is delivered on her desk by Jolly St. Nick himself.

In this 2004 computer-animated movie, a young boy boards a magical train on Christmas Eve called the “Polar Express.” The young boy, along with many other children, ride to the North Pole in a dreamlike adventure.

Before his journey to meet Santa, the young hero boy begins to doubt whether or not Santa truly exists. Many awe-inspiring events lead him to again believe in old Saint Nick.

One of his first experiences occurs when the children are offered hot chocolate by singing and dancing waiters. Hot cocoa shoots through the air and lands perfectly into mugs for the children to sip on. So be sure to make yourself a cup before playing this classic film.

The Grinch that Stole Christmas: Who Pudding

The Grinch is an irritable and bitter creature who hates everything about Christmas. He lives with his dog Max in the cave of a mountain on the outskirts of Whoville. All of his resentment for Christmas stems from his childhood, where he was bullied for his green facial hair.

After a young citizen of Whoville, by the name of Cindy Lou, learns about the Grinch and his past, she attempts to befriend him. Later Cindy Lou gets the Grinch nominated for an award for the town’s annual Who-bilation, and the Grinch agrees to return to Whoville.

During this Who-bilation, he endures multiple festive activities, including judging the “Who Pudding Cook-Off.” So in memory of this beloved comedy and family movie, try making this yummy who pudding. You can grab the (as official as it gets) recipe below from Seussville.com or watch the video above to see a yummy take on the recipe.

Get the Recipe: Seussville

A Christmas Carol—there are tons of versions, just pick your favorite–is a retelling of a classic novel by author Charles Dickens. The story and film adaptations are centered on the life of Ebenezer Scrooge—an unfriendly older man who hates Christmas after losing his business partner on Christmas Eve.

After decades of miserly behavior, the spirit of Jacob Marley (his deceased business partner) visits him. Marley tells him that three spirits will visit Scrooge and help guide him to a happier life and a better future.

After meeting all three spirits, Scrooge wakes up on Christmas morning and sets out to change his ways for a better future and to avoid the fate the spirits showed him. He makes donations, provides a raise to his employee Bob Cratchit, and even attends his nephew’s dinner party.

One of the final scenes from the film includes Scrooge and others enjoying dinner, where Ebenezer insists on having Christmas dinner at his home the next year. Try this mince pie recipe to go along with this warm-spirited film.

Get the Recipe: Daring Gourmet

Home Alone is a classic movie about a young boy named Kevin who is accidentally left at home after his parents and family go on an international holiday for Christmas.

This youthful mischief-maker works hard to protect his house from burglars by setting up handcrafted booby traps. During this chaotic and hilarious film, Kevin also gets to enjoy the thrill of having an entire home to yourself without parents.

For Kevin, that means jumping on beds, making big messes without his parents telling him to clean it, and eating all the pizza he wants. So throw a pizza in the oven at home or order in before watching this Christmas classic.

Get the Recipe: A Couple Cooks 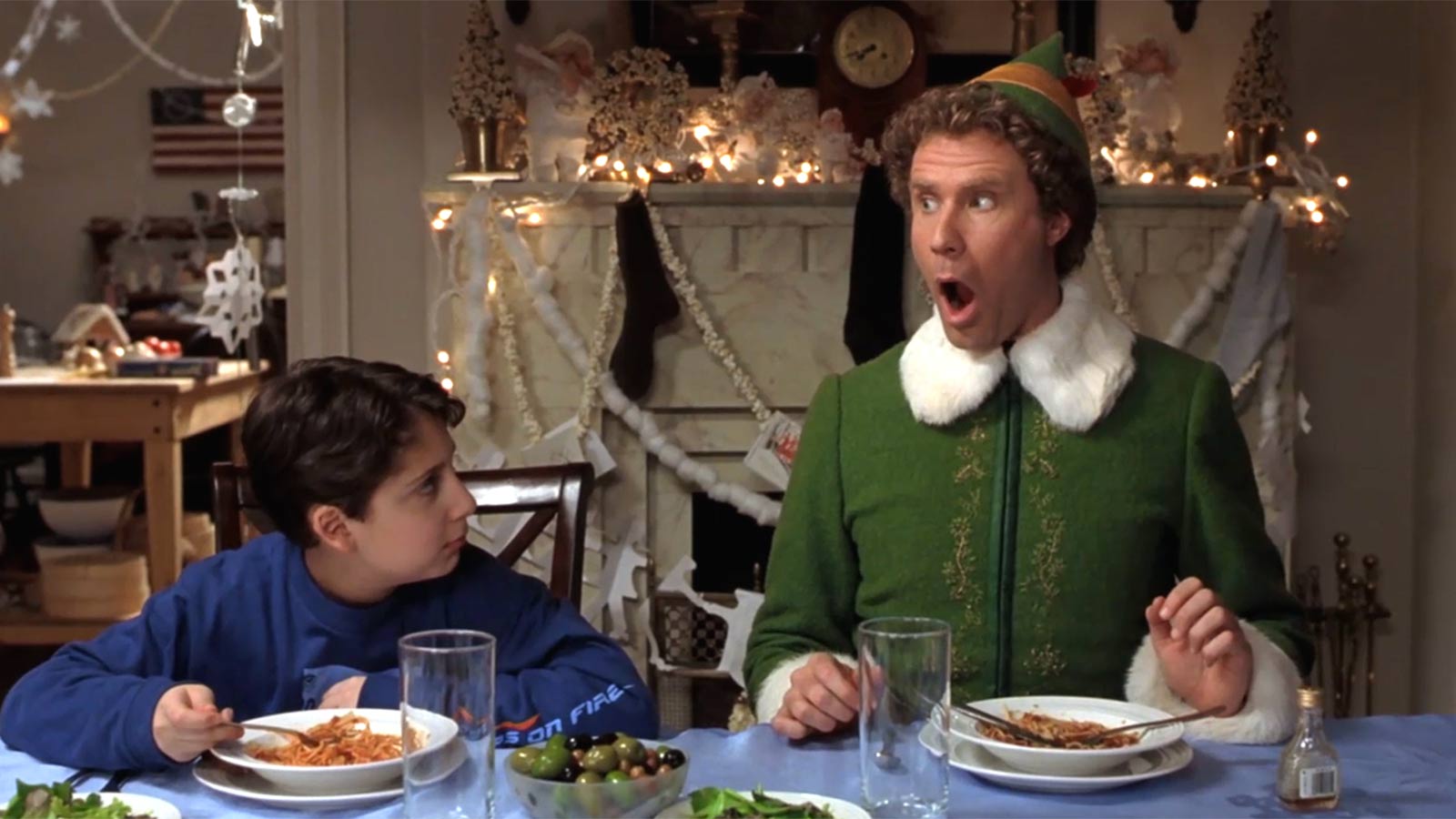