Ring in the new decade with a modern nod to a bygone era. Signature speakeasy-style bites are the perfect way to welcome this century’s coming of age while paying tribute to all that’s gotten us here. From the elevated Oysters Rockefeller to simple deviled eggs, these classic party foods are never going out of style.

If the age of speakeasies, flappers, and the Charleston taught us anything, it was how to have a good time, despite rules and regulations that said otherwise. But the age of prohibition wasn’t solely filled with bathtub gin. Flappers and their gents needed fuel to dance the foxtrot, and finger foods were where they found it. Plus, thanks to better refrigeration, crisp, cool, salads finally became a thing. So, as we enter the 2020’s, let’s channel the carefree spirit, and appetite, of the last century, with a roaring New Year’s Eve.

Mushrooms have been cultivated in France for centuries, and stuffed Parisian mushrooms make up a classic dish in their own right. We include them here, not only because they’re great finger foods, but also as a homage to the “Lost Generation” artists.

These 1920s greats included Ernest Hemmingway, James Joyce, and F. Scott Fitzgerald, all of whom came of age directly after World War I and lived in Paris throughout the 1920s. We can’t say for sure that they enjoyed a lot of Champignons de Paris, during their stay in France, but we like to think they did!

Did you know meatballs aren’t from Italy? Okay, that’s not entirely true. Meatballs, as a technique for cooking ground meat with a mixture of starches and seasonings, have been around for a long time. They show up under various names in many cultures across space and time.

But, the meatballs we’re used too didn’t come to be until Italian American immigrants started calling them that. In fact, you won’t find a recipe referring to the classic tomato sauce simmered variety until the 1920s.

This classic entree is easily made into a speakeasy-style finger-food with the use of a toothpick or two. And, while marinara would be most appropriate for a 1920’s theme, feel free to use the sauce and spice combination that best strikes your fancy.

Get the Recipe: Taste of Home’s Italian Appetizer Meatballs

In 1899, well before the roaring ’20s made their mark, Jules Alciatore invented a dish at his father’s namesake restaurant, Antoine’s, that would live on to this very day. To make up for a shortage of escargot, Jules switched out the slimy French snails for local and readily available oysters. He named the dish after the richest man in the world, and the classic meal was born.

Oysters, in general, were common bar food, cheaper by the pound than a pint of beer. When prohibition came along, the love for oysters didn’t die. And, the decadent oysters Rockefeller remained a favorite dish in the finest of speakeasies. They’re still delicious when paired with typical New Years’s Eve fare, especially alongside a sip of buttery champagne!

Get the Recipe: Epicurious- Oysters Rockefeller

Deviled eggs have been around a long time, with mentions of various hard-cooked and stuffed versions dating back to ancient Rome. But a few factors came together in the early 1900s to make this ancient party snack a quintessential part of the roaring 20’s scene.

The commercialization of mayonnaise in 1907, the popularization of “devilling” which simply meant to add hot spices with mustard, and the advent of in-home refrigeration made deviled eggs the perfect party food. And, they’re still widely adored today. Serve them with plenty of paprika on a pretty, deviled egg-shaped platter, for a truly authentic take on this 1920’s favorite.

The original Waldorf Salad isn’t what you see today. It was created by Oscar Tschirky, a hotel maître d’ at the Waldorf Astoria, who used only celery, apples, and mayonnaise. By the 1920s, thanks again to in-home refrigeration, salads like this one became extremely popular, with recipes showing up in many cookbooks and even a few suffragette pamphlets.

At this point, additions like walnuts, beds of butter lettuce, and sliced grapes, all begin to make appearances. For a 1920s New Year’s Eve, we recommend serving this one in individual phyllo cups. They effortlessly turn the salad into a bite-sized appetizer, making it easy for guests to mix and mingle.

Get the Recipe: Recipe for a Party – Mini Waldorf Salad in Phyllo Cups

Let’s be clear; no place in Asia serves this salad as an authentic dish. It’s not Chinese in origin, which should come as no surprise given the time that it was invented. In the early 1900s, sad as it may be to our modern ears, the term “Chinese” didn’t just point to ethnicity or culture. Instead, it suggested something was new, different, and foreign.

The flavors of orange and sesame mixed with crunchy chow mein seemed exotic and exciting to American taste buds. So while there’s no real Asian heritage to speak of here, the salad quickly became a classic and is still seen on many restaurant menus today. Serve this one in cups, as mentioned with the Waldorf salad above, for easy crowd mingling at your roaring 20’s party.

The Hoagie has a few possible origin stories. To be brief, we’ll only include our favorite here. Legend says that on a construction site in 1920s New York, an Irish immigrant named Hogan, sat down to eat his lunch and found himself quite jealous of his workmate. You see, his Italian friend pulled out a sandwich layered in cold cuts and cheese, which put his Irish gruel to shame. He asked the Italian man if he might purchase a lunch like that somewhere.

The Italian, seeing a chance to make some extra money, went home that night and asked his wife to create a giant sandwich, one he could cut into slices and sell at work. He named the sandwich after the man who inspired it, and so the Hoagie was born.

It makes for an incredible party dish even today since one giant sandwich can just as easily feed a party as well as it does a construction site. Order one from your local Italian deli, or build your own using your favorite selection of meats, cheeses, and crisp, cool, veggies.

Serving a menu straight out of a speakeasy is a delicious way to celebrate the start of a new decade. After all, meatballs, Waldorf salads, and sub-style sandwiches are all still familiar sights at cocktail parties today. Just stay away from the bathtub gin. We’re all for honoring our history, but let’s leave the prohibition pitfalls in the past! 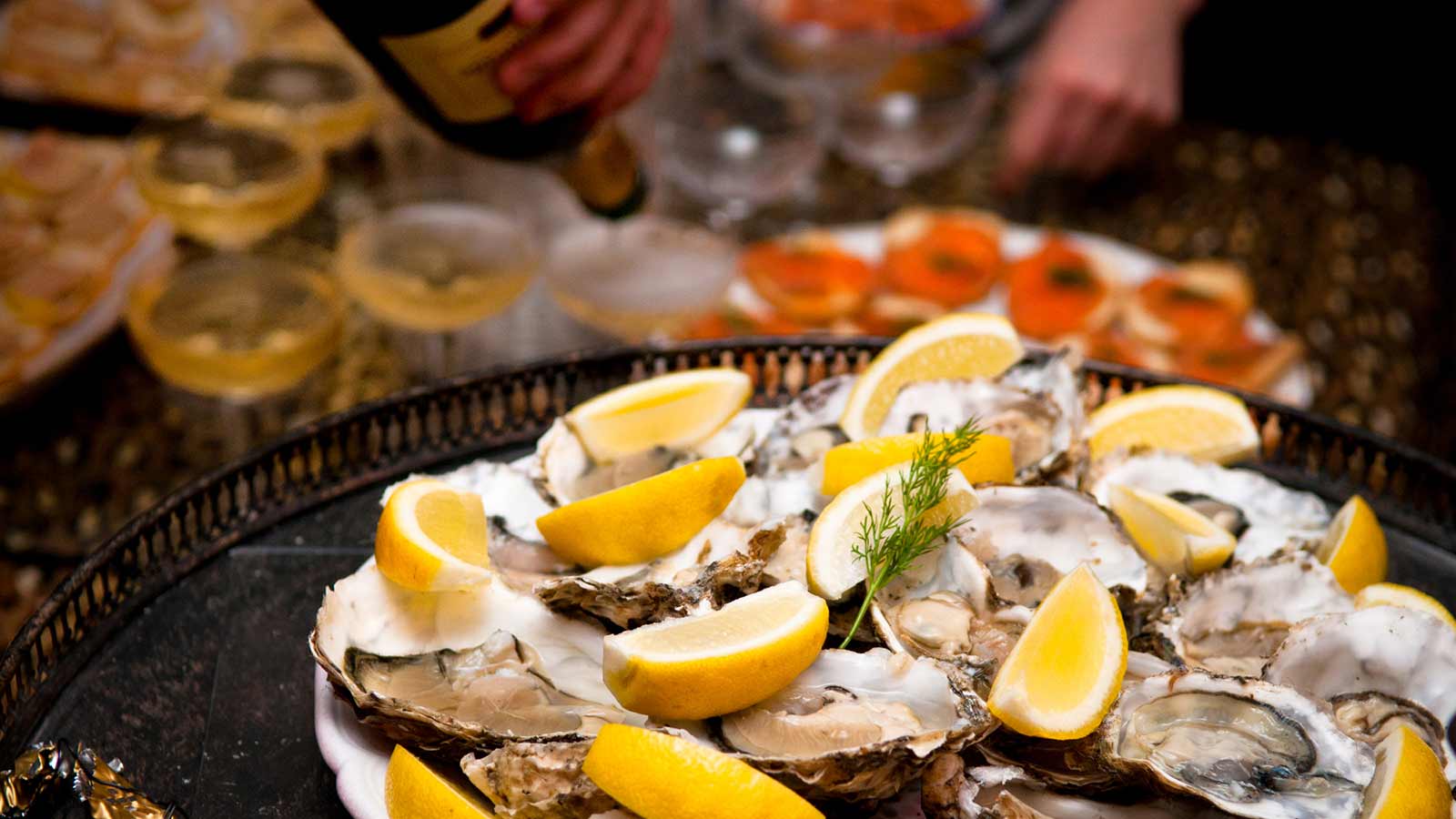