Halloween is about trick-or-treating for candy, carving pumpkins, and indulging in some of the best fall-flavored treats. Some of the most adored traditional Halloween foods hold fascinating stories about how they began.

Like many popular holidays celebrated worldwide, traditional foods and customs come from cultural and regional influences. From caramel and candied apples to soul cakes and popcorn balls, each treat has quite the tale to tell.

Every October, you’ll notice pumpkins are used as glowing decorations, but you’d be surprised to know how carving pumpkins became so famous. The name “Jack-o’-lantern” originated from an old Irish myth about a guy nicknamed “Stingy Jack.”

According to the folktale, Jack invited the devil to have a drink with him, but being stingy and all, he didn’t want to pay for his drink (per History). Jack tricked the devil into turning into a coin he could use to purchase the beverage.

This kit has tools for all your carving needs.

The story goes on to tell how Jack held on to the coin in his pocket with a small cross to prevent him from turning back into his wicked form. Hundreds of years ago, folks in Scotland, Ireland, and England carved faces into turnips to keep Jack’s wandering spirit away. Once the traditions were brought back to the U.S., pumpkins took the place of turnips, and the rest is history.

Beyond carving, you’ll find several recipes today that use the bright orange fruit. Pumpkin (not to be confused with pumpkin spice) has become a quintessential flavor throughout the fall months. From chocolate chip muffins to pumpkin-filled oatmeal, the autumnal gourd has made an impression in the culinary world like no other.

Candy and caramel apples, which are two different treats, have been around for several years. In the fall, you’ll notice them at fairs and farmer’s markets, but they are super easy to make at home, too.

RELATEDSkip the Store-Bought Caramel Apples: It's Easy to Make Them at Home

According to Food & Wine, a candy maker named William W. Kolb invented the candy apple in Newark, New Jersey. After experimenting with melted cinnamon candies, he thought to dip apples and sell them around Christmastime. They eventually became popular trick-or-treat handouts instead.

Melt the caramels and dip your apples.

Caramel apples, on the other hand, were created by Kraft Foods employee Dan Walker. Walker decided to get creative with his large inventory of leftover caramel candies by melting them down and then dipping apples in, just like Kolb did with cinnamon candies.

Today, there are several ways to enjoy both candied and caramel apples. Either coat them with sprinkles or nuts or press them into a bowl of crushed candy bars.

While explanations on the origins of soul cakes are a bit ambiguous, it’s clear these cakes were given out in the middle ages, per NPR. Some suggest they were baked for traditional bonfire celebrations, while others say they were used to pay beggars.

On All Souls’ Eve, poor people would knock on the doors of the wealthy and ask for soul cakes. In exchange, the beggars would pray for the souls of the rich and their deceased family members.

In other parts of the world, soul cakes were paid to those who went around mumming, which was the custom of going door to door to sing songs to the spirits that walked the earth.

Today, we call that trick-or-treating. If you’re interested in making soul cakes (technically, they’re cookies), you’ll have to give this authentic spiced soul cake recipe a go.

Get the Recipe: Fuss Fee Flavours

The tradition of mumming and giving out soul cakes eventually turned into the practice of homemakers giving out cupcakes and cookies instead. After World War II, homemade devil’s food cupcakes became the go-to handout for trick-or-treaters.

The tasty treats acquired their name thanks to a new (and improved) cocoa powder that had come on the market. The cocoa powder created a very dark and chocolatey cupcake batter, giving it a devilish impression. At that time, anything richly spiced, boasting a dark hue, would be referred to as “deviled.”

Today, you’ll find these famous cupcakes are given out during Halloween parties, and we’ve got a great recipe if you’re interested in making them yourself. The 1950s tradition of giving out devil’s food cupcakes eventually turned into handing out candy.

Get the Recipe: Tori Avey

The trick-or-treating tradition started well before soul cakes and devil’s food cupcakes. According to History, trick-or-treating comes from the ancient pagan festival called Samhain, where ancient Celts (pronounced Kelts) believed that spirits walked the earth on that one night per year.

On the nights leading up to Samhain, people from Ireland and Scotland would go door to door and sing songs to the spirits that walked the earth, giving cakes out for payment.

What started as a pagan ritual has become a celebration filled with parties, costumes, pumpkins, and lots of candy. The holiday has continued to evolve even in recent years, going beyond typical candy handouts.

Today you’ll notice a new trend called the Teal Pumpkin Project, developed to support kids who can’t have most candy due to allergies or other conditions. Allergy-free treats and trinkets are often offered to make all kids feel included.

Delicious and safe for kids!

Popcorn balls are old-fashioned treats that were once quite popular in the 1950s. Like a few other foods on this list, popcorn balls were created by accident, thanks to a strange weather incident.

According to the folktale, the sticky and salty snacks were created around the 19th century in Nebraska. At that time, Nebraska had been experiencing several freak weather events where it was both rainy and sunny at the same time. They called it the “Year of Striped Weather.”

According to folklore, the sun blazed over the cornfields on one particular farm until the corn began to pop. It rained so hard that the syrup from the sugarcane fields flowed into the popcorn and down the hill creating giant popcorn balls! Sadly the grasshoppers got hungry and ate them all up, so you won’t ever catch a glimpse today. (Via, What’s Cooking America)

The hilarious folktale is excellent to tell the kids and keep them busy while you work to warm up the marshmallow mixture used to create these sweet and salty treats. If you haven’t made these yet, we highly recommend them; they’re easy to make and super tasty.

Get the Recipe: Lil’ Luna

Halloween is known for spooky gatherings, dressing up, and going trick-or-treating. If you find yourself with a surplus of leftover candy this year, use them up to make these delicious desserts. 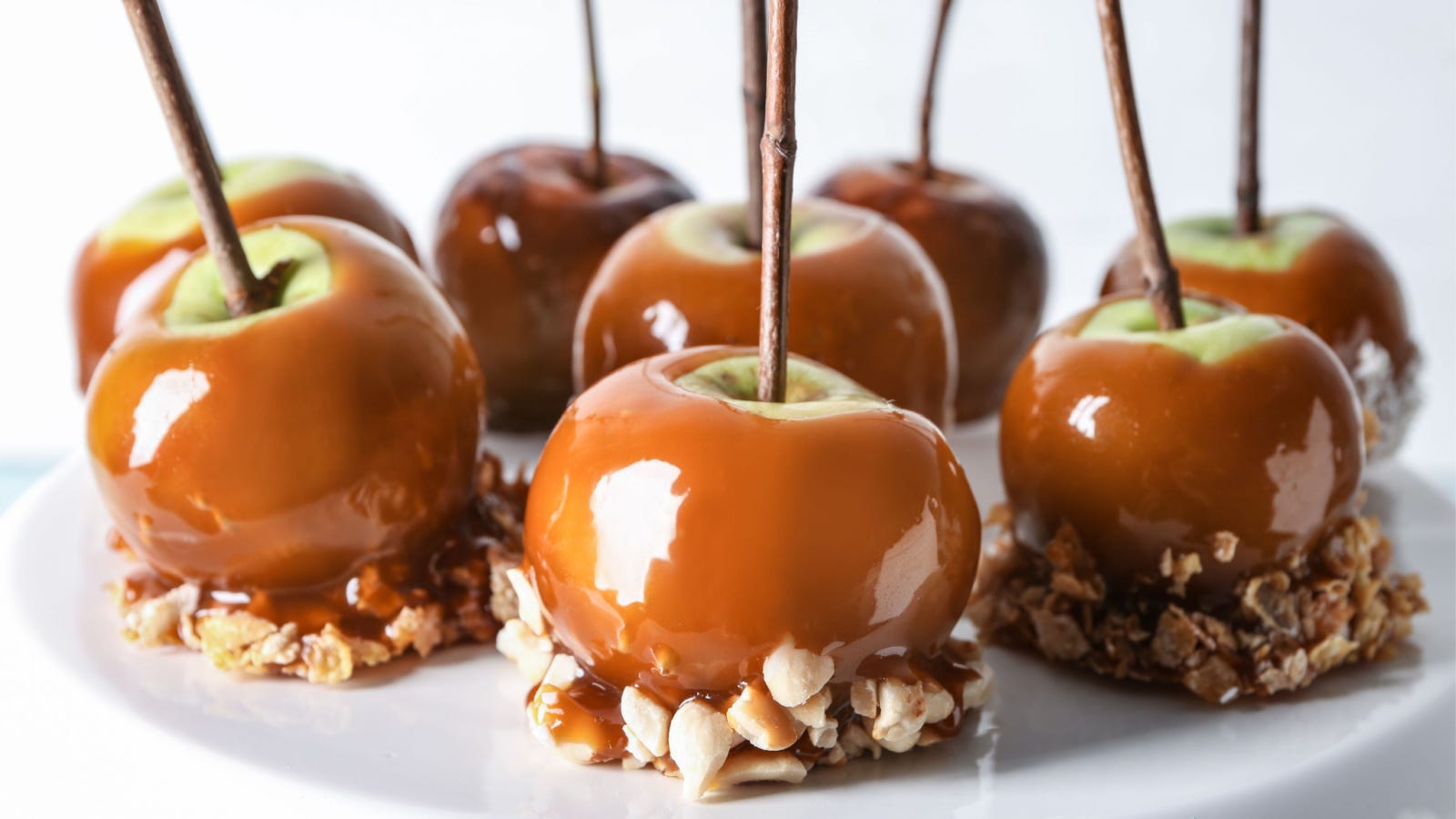 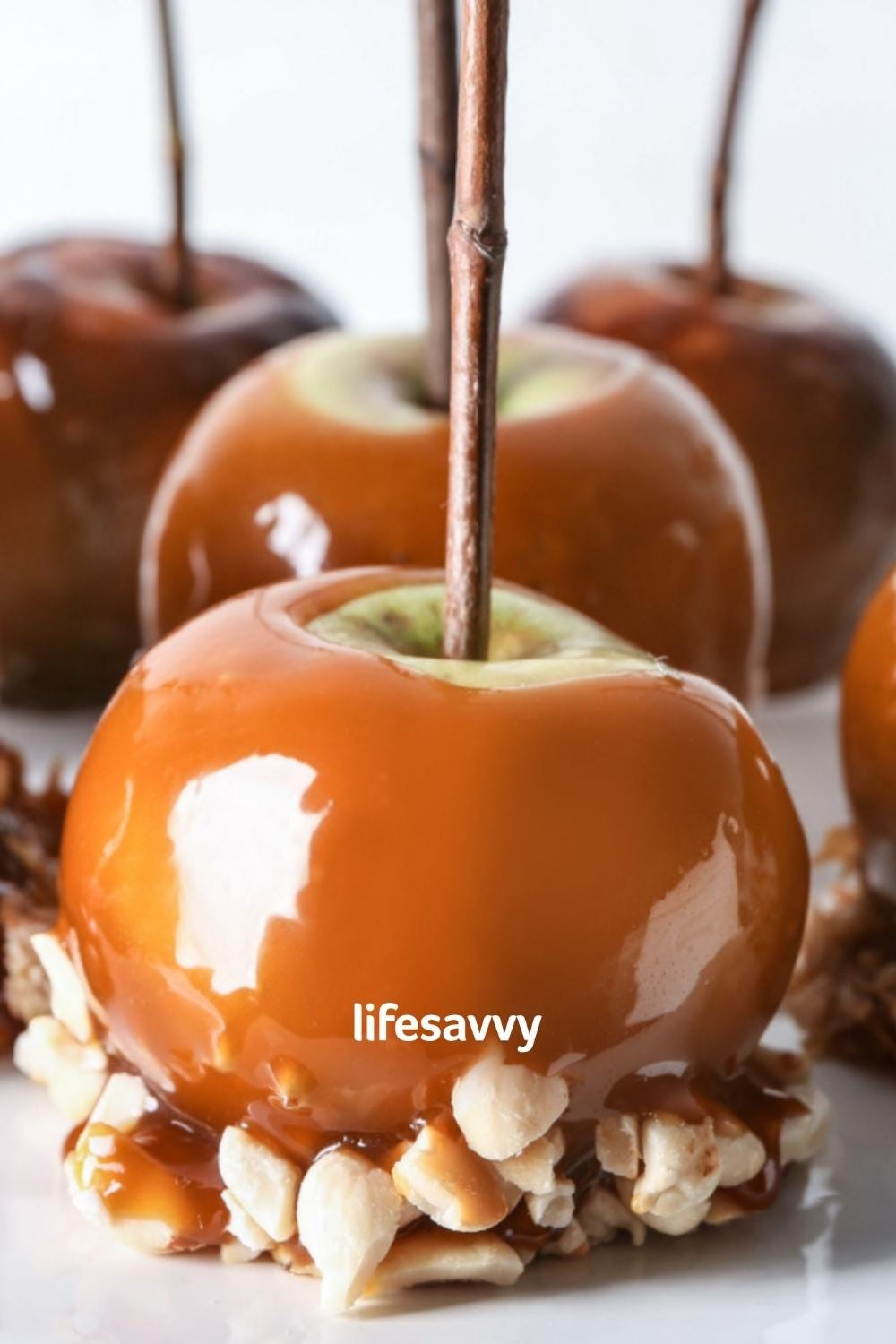