If you’re not a big coffee drinker or you’re new to the industry, you were probably confused when you realized some drinks are made with coffee while others are made with espresso. While these two ingredients have many similarities, they have some key differences as well. Here’s what you need to know about the difference between coffee and espresso, as well as some of the tastiest drinks you can make with each.

Espresso is a type of coffee that is made by using an espresso machine. The machine forces hot water through tightly packed ground coffee beans. This results in a small amount of coffee with a strong flavor.

Espresso is made from the same beans as other forms of coffee, but its preparation method means that it has more caffeine than the same amount of coffee. It is typically served in smaller serving sizes because of this.

Brew lattes, cappuccinos and espressos in a comfort of your home.

Coffee is a type of brewed drink made from roasted coffee beans. The beans are ground and then placed in a filter with hot water. The hot water extracts the flavors from the beans, resulting in a cup of coffee.

Coffee has less caffeine than espresso because more water is used per serving. This dilutes the caffeine content. Additionally, the grind size for coffee is usually larger than for espresso, which also contributes to its lower caffeine content.

While espresso is always made the same way, there are many different ways to brew coffee. Cold brew, which is made by brewing coffee grounds in cold water, is one popular method. Drip brew is the method most home coffee machines employ, which involves letting hot water drip through a filter filled with coffee grounds. Other methods include pour-over, French press, and siphon brewers, and each method will give a slightly different flavor and caffeine content to your cup of Joe.

Make smooth coffee in your own kitchen.

What’s the Difference Between Espresso and Coffee?

The main difference between espresso and coffee is the way they are made. Both filter water through coffee grounds, but an espresso machine makes the final product much more concentrated. Espresso is also generally stronger in flavor than coffee and thicker in texture.

While espresso is a type of coffee, coffee is not a type of espresso. So while these two ingredients are similar, they produce very different drinks.

Tasty coffee from a familiar favorite.

How Much Caffeine Is in Espresso Versus Coffee?

Ounce for ounce, espresso clearly contains more caffeine. However, espresso is also served in smaller portions, so an espresso shot mixed with milk may end up having less caffeine than a cup of plain coffee of the same size. A standard eight-ounce cup of coffee, for example, contains anywhere from 95 to 130 milligrams of caffeine, which is more than a single shot of espresso.

Make coffee at home and take it on the go.

Drinks You Can Make With Espresso

Espresso drinks are made by combining a shot of espresso with milk, syrup, foam, or other ingredients for flavor. Many of your favorite drinks are made with espresso. Some of the most popular ones include:

Drinks You Can Make With Coffee

Coffee drinks are made with coffee and do not contain a shot of espresso. Because coffee has a less intense flavor than espresso, there is usually more coffee in these drinks than there is espresso in espresso drinks. Some of the most popular coffee drinks include:

You’ve probably had both coffee and espresso before, but do you know the difference between the two? Here’s why it’s important, plus some tasty coffee drinks to try featuring each ingredient. 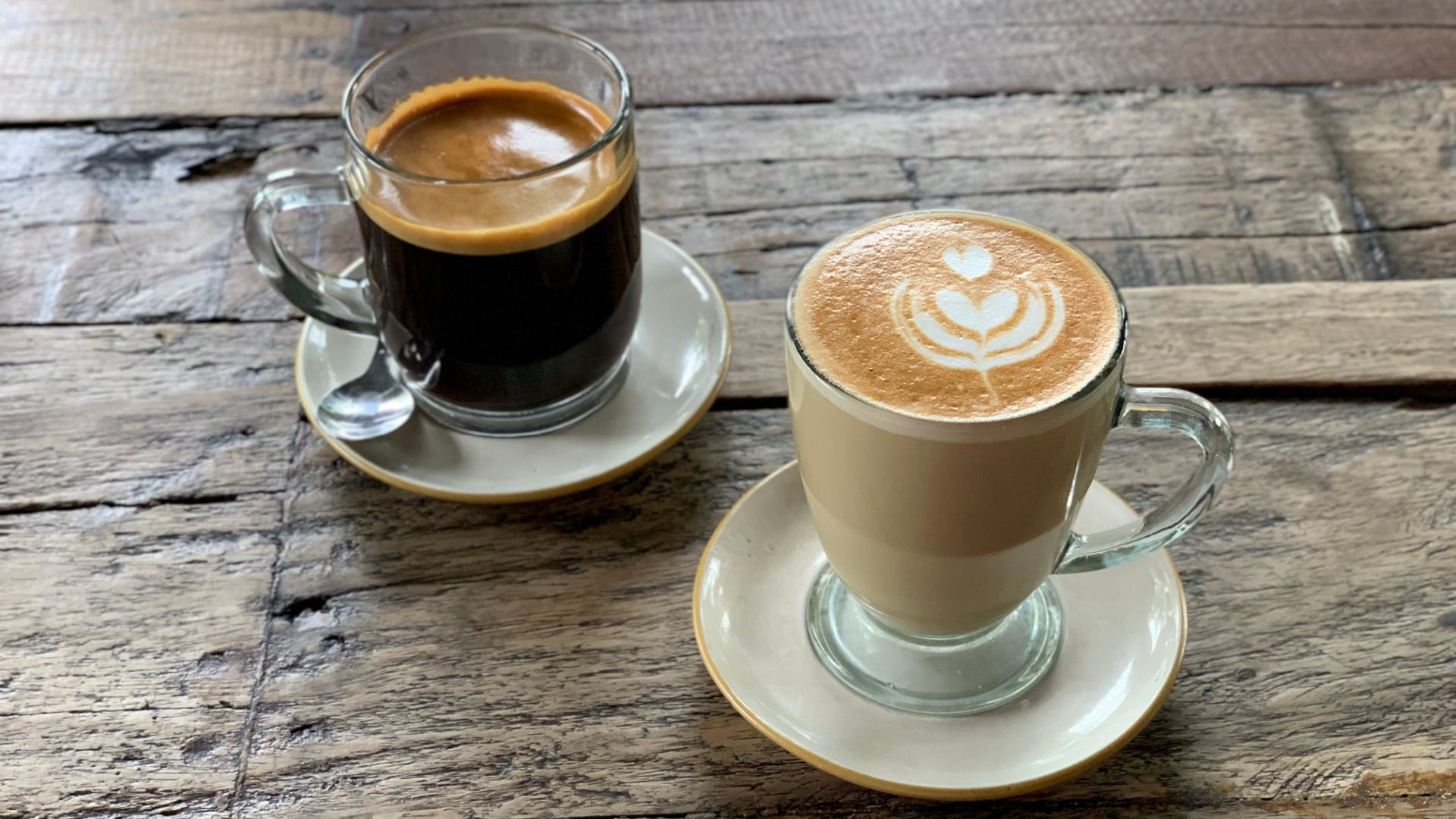 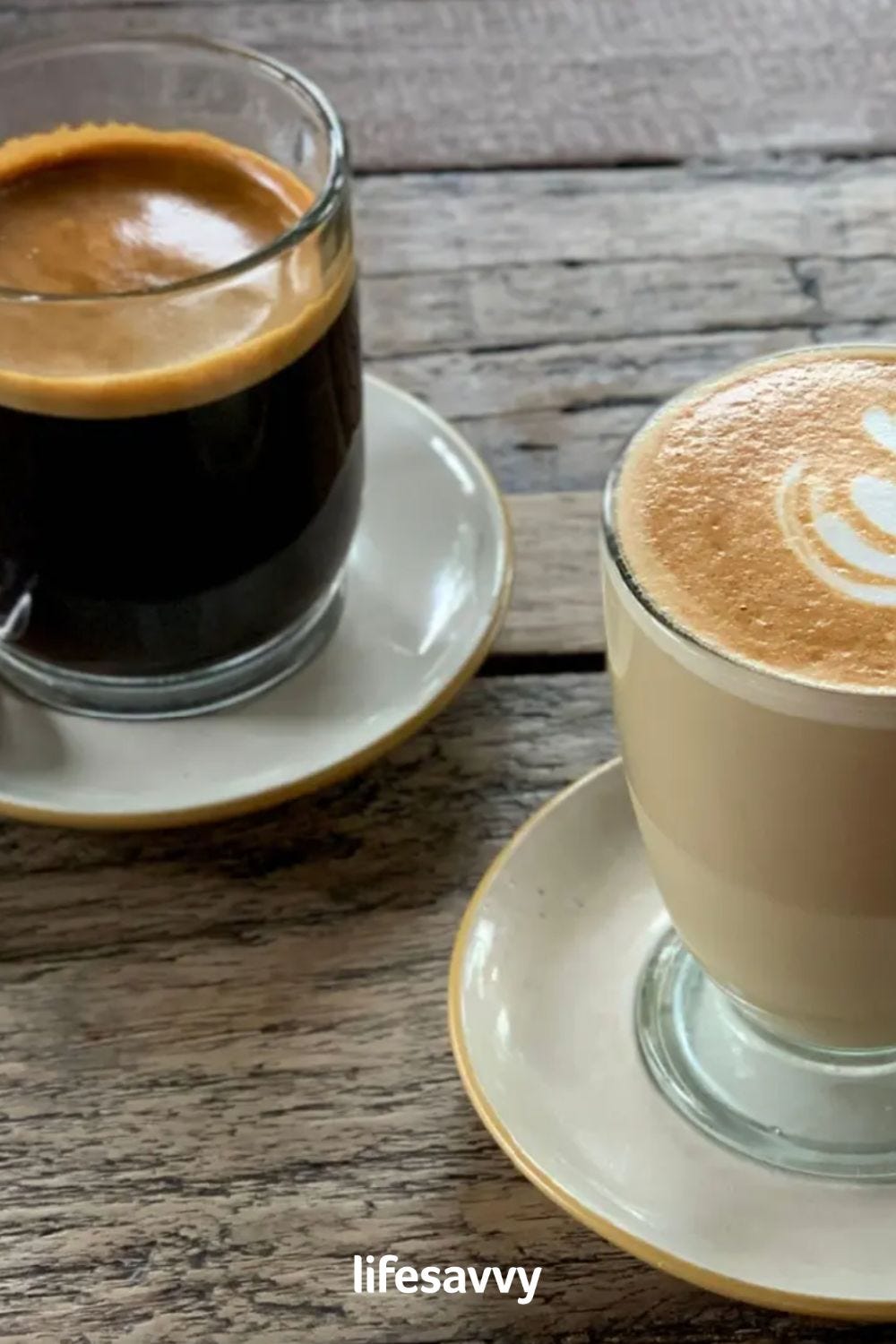