Nobody wants to be the host that causes food poisoning, so if you plan on cooking this Thanksgiving, make sure you understand how to stuff a turkey safely.

Stuffing the thanksgiving turkey is a long-standing culinary tradition that takes place in kitchens across the nation every November. Although well-loved by many, the practice often becomes a question of food safety.

Is It Safe to Stuff a Turkey?

Most people encounter the unfortunate occurrence of food poisoning at some point in their life, and if you’re one of them, you know how awful it can be. What’s worse than food poisoning itself is being the host that causes it.

RELATED7 Ways to Avoid Food Poisoning Your Family This Thanksgiving

Stuffing a turkey incorrectly is one of the common culprits of foodborne illness every year, so be sure to take precautions if you are adamant about continuing the tradition. Here’s why it’s dangerous.

When roasting a stuffed turkey, you must wait until the turkey and the stuffing has reached a safe internal temperature of 165 degrees Fahrenheit, per USDA. Dangerous salmonella juices seep into the bready mixture and can be unsafe if it doesn’t reach a safe temp.

A tool that every home cook should have in their kitchen.

The main issue here is that poultry typically reaches a safe temperature before the stuffing. So if you wait for all that delicious stuffing to reach temp, you’re left with unbearably dry turkey that no gravy can fix. On the other hand, taking the turkey out once it reaches temp without checking the stuffing’s temperature may cause a bad case of food poisoning when eaten.

We get it; the name itself implies that you should stuff the bird, but don’t worry, we have a few solutions for you!

What Do You Stuff a Turkey With?

Adding ingredients to the inside of your turkey is more than about tradition. It’s about flavor and presentation. Since bready stuffing loves to soak up all those dangerous juices like a sponge, you might want to stuff your turkey with other (less risky) ingredients instead.

RELATEDHow to Make a Beer Basted and Bacon Wrapped Turkey

We typically load our turkey with a few different elements to create what we call a drunken beer and bacon-wrapped turkey. First, a couple of carrots, celery stalks, and a quartered onion make their way in as the famous aromatic trio that is called mirepoix.

We also like to pour in a Belgian-style wheat beer like Blue Moon or Allagash White because the coriander and orange peel notes make a lovely citrussy addition to the roast. If you don’t have that on hand, pick a beer you already have at home and booze that bird up.

Complete with a rack for heat circulation and even cooking.

You can also add fresh herbs like rosemary, thyme, and sage for additional flavor, and if you’re looking for a new and light take, apples and citrus fruits are lovely when added to a turkey roast.

How Do You Stuff a Turkey Safely?

Although the tradition continues year after year, putting stuffing inside a raw turkey can be unsafe. Following guidelines written by the United States Department of Agriculture (USDA) will help lower your risk.

RELATEDBreak Away from the Box: 6 Homemade Stuffing Recipes You’ll Love

If you are adamant about stuffing your turkey, always ensure the ingredients in your stuffing are fully cooked (and cooled) before adding them. It will take longer for the stuffing to reach a safe internal temperature when added to the turkey cavity, so adding raw ingredients can be even more unsafe.

To ensure your stuffing reaches a safe internal temperature, do not set your oven any lower than 325 degrees Fahrenheit. The USDA also recommends adding your stuffing right before it’s time to go in the oven and stuff it loosely. That’s right— even though we call it stuffing, we don’t want to overstuff it.

Finally, your turkey and stuffing should reach an internal temperature of 165 degrees Fahrenheit before you remove the roast. It’s essential that you use a food thermometer to check the stuffing and turkey for accurate results. Check several locations (especially the center of your stuffing) for extra measure.

Stuffing your turkey can lead to a terrible case of food poisoning, so this year either follow the USDA’s guidelines or cook it separately. You might also be used to rinsing your turkey under running water, but that’s another unsafe tradition we recommend you steer clear from this year. 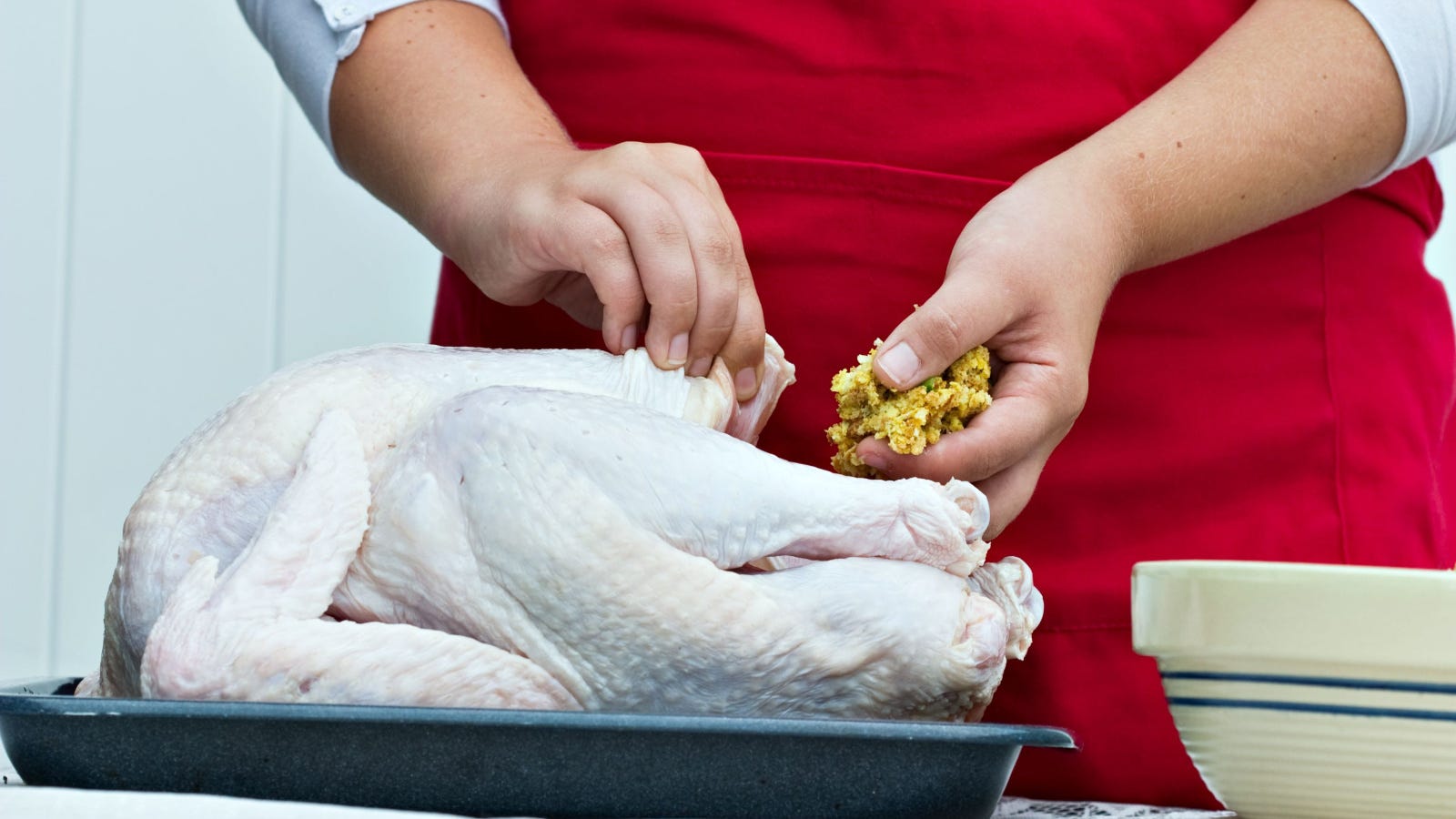 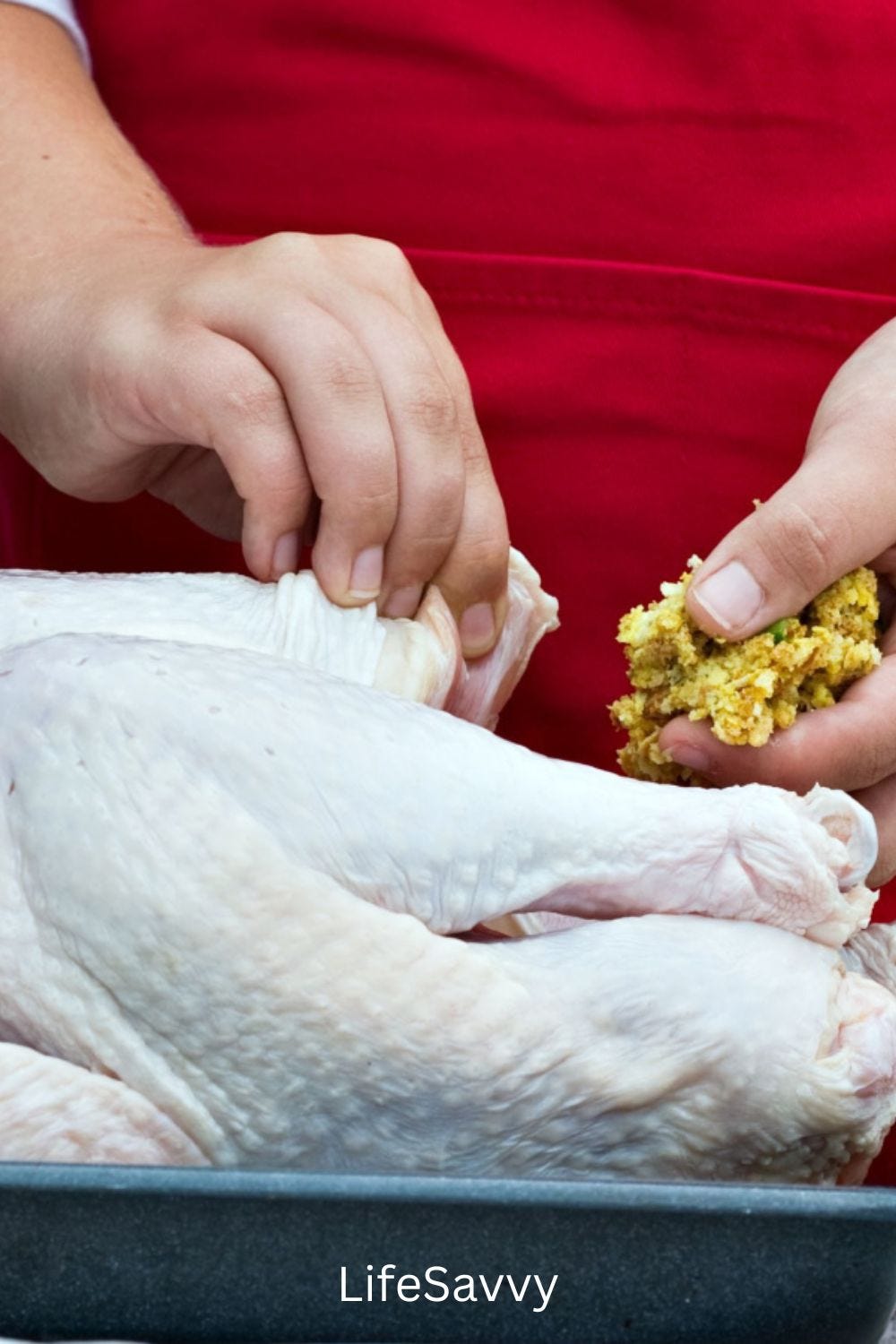