Say buh-bye Peanut Butter, and adios to almond spreads. There’s a host of new butters on the market made from every seed and nut imaginable. From pistachios to watermelon seeds, there’s never been a better time to try something unique on your sandwich.

When it comes to conventional products to spread on toast, peanut butter is usually first to mind. But the childhood sandwich staple has fallen under fire in recent years. With the rise in peanut allergies, alternative nut spreads have gained in popularity. And now, toast aficionados find basic staples like peanut butter or even almond butter, to be a bit behind the times.

But that doesn’t mean anyone’s over nut butter. The latest in toast trends is all about creative spreads for your next sandwich, and there’s not a peanut in sight! Bright green pistachios, buttery macadamias, and healthy hemp all have a place at the table, and we have to say, we’re here for it.

Allergies, for many, means seed butters are far safer than their nut-based counterparts. While some fruit seeds are inedible, like apple seeds which contain precursors to cyanide, many are quite nutritious. And the wide variety of edible seeds means there’s no end to the number of seed butters that can be commercially produced. Here are a few of our favorites to get you started:

Watermelon Butter
It’s long been purported within the playground scene that swallowing a watermelon seed is essentially suicide. Common childhood knowledge says, of course, that the seed will grow within your belly, turning into a melon far too large for your insides to contain.

Thankfully, this story has been proven false. In fact, watermelon seeds contain zinc, potassium, magnesium, and many B vitamins, all of which are vital to health. And when cooked and ground, they taste reminiscent of nutty cashews and sweet sesame seeds, making this seed butter one to try! This one’s hard to find in stores still, but you can make it yourself or purchase it online.

Hemp Butter
Hemp is a variety of cannabis with less than 0.3% THC. Since THC is the compound within marijuana that gets you stoned, you can be sure your morning hemp butter isn’t going alter your mind. It is, however, a healthy way to start your day.

Hemp butter is touted for its exceptional ratio of omega 3’s to omega 6’s fatty acids. Plus, it’s bright green color makes it fun to eat. And, with a taste reminiscent of pine nuts, it’s delicious on more than just toast. Try it in salad dressings, pestos, and smoothies.

Sunflower Seed Butter
If you’re craving peanut butter, but can’t have it for any reason, sunflower seed butter is the next best thing. It’s very similar to peanut butter in taste, color, and texture. And unlike hemp or watermelon seed butter, this one is often found in regular grocery stores.

It does tend to turn green if you heat it though, giving baked goods a mossy tint. It still tastes great, but the color can come off as unappetizing. So, consider keeping this one to toast, smoothies, and other raw applications.

Soy “Nut” Butter
Really, the name should be soybean butter. There are no tree nuts to be found here, and those with allergies to peanuts, walnuts, or cashews, can still enjoy this buttery spread.

Soy nut butter isn’t anything new. It’s been sold in health food stores for decades. But, it’s growing popularity means you can find it more readily in regular supermarkets. It tastes similar to peanut butter, and fans love it for being lower in fat and full of complete protein.

Not everyone into the latest toast trend has a nut or legume allergy. Some are just bored with basic peanut butter. And that’s where a whole host of other nuts come into play. Pretty much all of them can be toasted, roasted, and ground down into butter, so we’ll just touch on our favorites to hit the market. 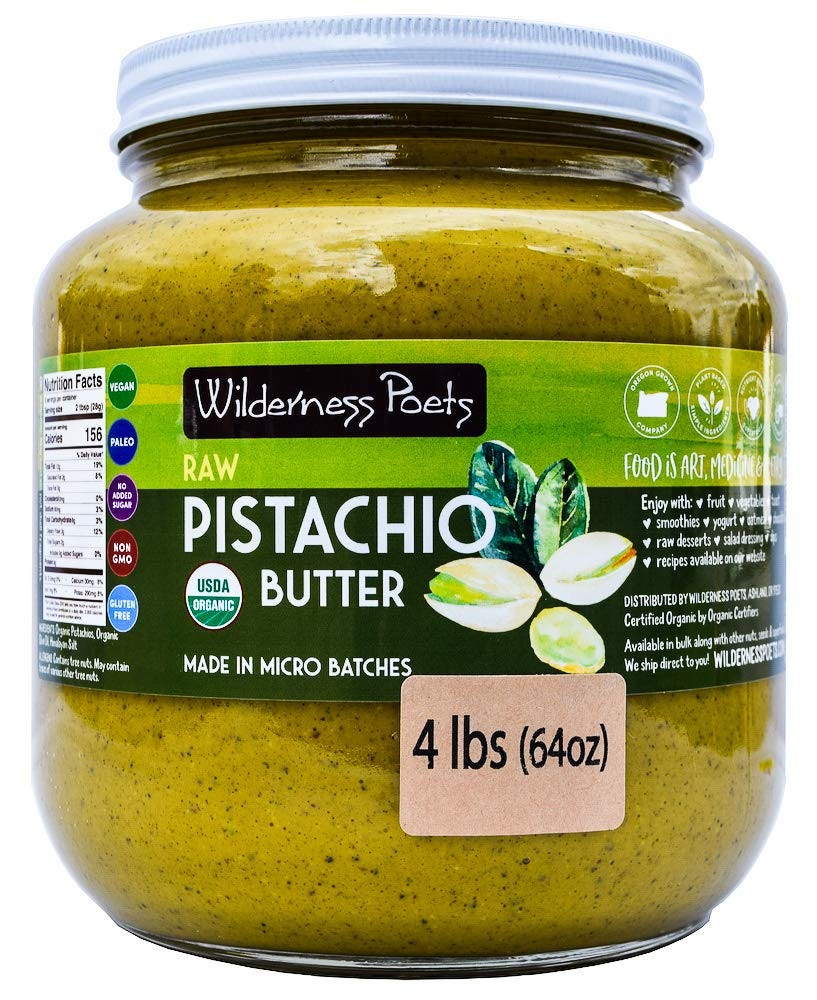 Pistachio Butter
They say pistachio butter will be all the rage in 2020, and it’s easy to see why. The nearly neon green hue is practically screaming to be featured on visual social media platforms, like Instagram.

But, as with all things of beauty, there’s a catch. Pistachio butter may look extra appealing, but it’s known for being a little bland. To make up for this shortfall, it’s typically given a super sweet pairing. Look for it on restaurant menus, tucked into delicate macarons, or folded into a sickly sweet dessert crepe.

Cashew
Fans of cashew butter can’t help but talk about its health benefits. It has half the sugar of standard peanut butter, and it’s full of unsaturated, rather than saturated, fat. But it’s healthy qualities don’t mean a sacrifice in flavor.

Rich, creamy, and slightly sweet, cashew butter is excellent in pretty much everything. Try it in your morning oatmeal. Or be adventurous and use it to make chicken satay, where it works beautifully in place of its peanut butter cousin.

Macadamia
It’s hard not to be a fan of macadamia nuts in any form. They’re smooth, rich, and exceptional in chocolate. But as a butter, they might be even more desirable. Creamy and decadent, this one’s great for filling french toast, baking into cookies, or licking right off the spoon. Plus, it’s high in fiber, low in carbs, and thought to help fight high cholesterol.

So give the jar of peanut butter a break and try one of the new nut butters on the market. They all go great with jelly, but don’t stop there. There’s a whole host of things to make with nut butters, and with so many to try, you’ll never run out of new options! 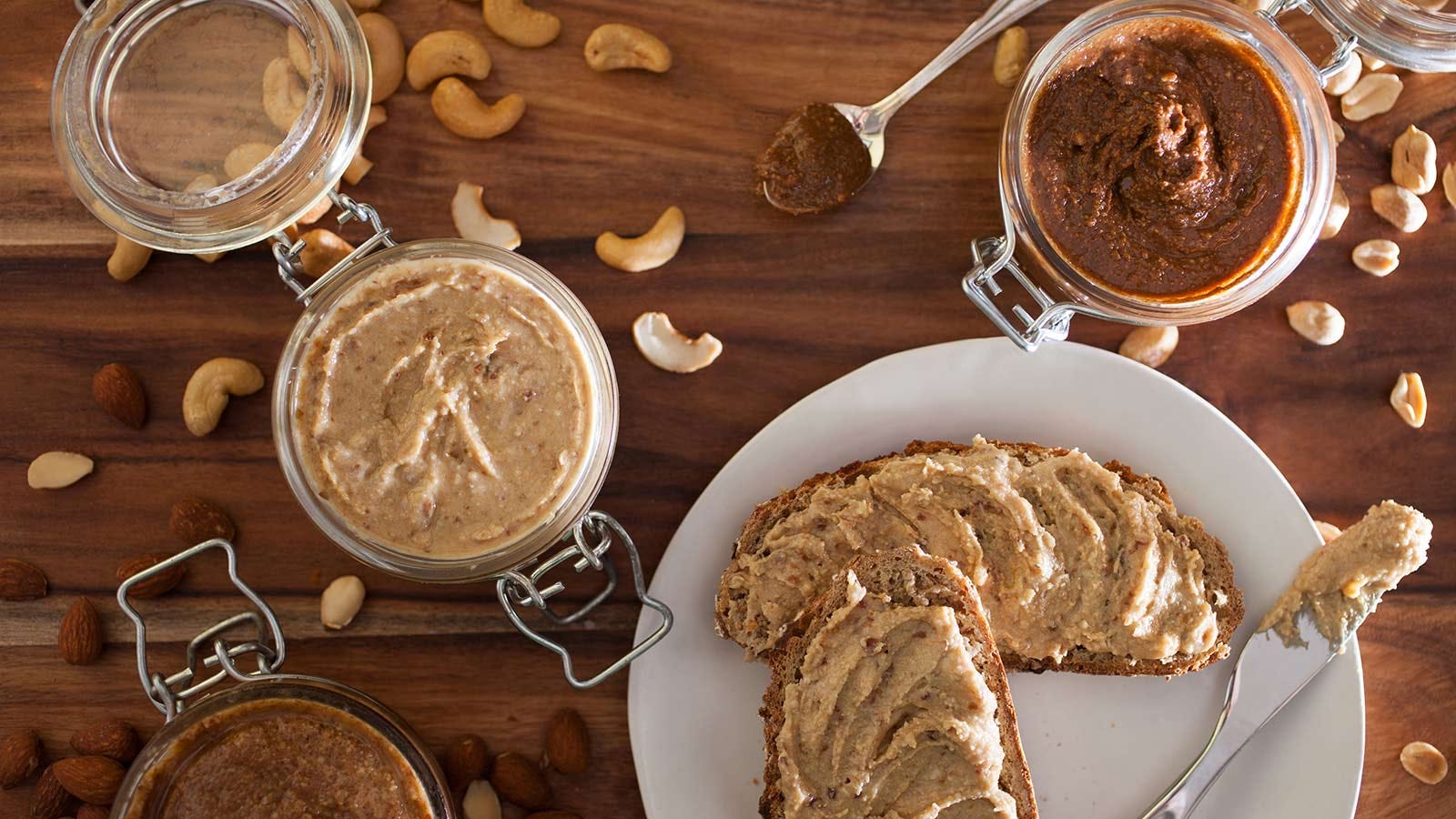