Getting over jet lag can be hard for everyone. It’s especially challenging for little kids because it throws their routine completely out of whack. These tips can help them ease into a new time zone without too many meltdowns.

As adults, we understand the concept of jet lag. We know when we jump time zones, it’s going to be hard on our sleep cycle, mood, energy, and appetite. But little ones often don’t understand what’s happening. They might miss the comfort of their bed, struggle to fall asleep, wake up too early, or just feel generally out of sorts. Let’s face it, resetting your circadian rhythm is hard!

It’s important to remain as flexible as possible with your travel plans—try not to schedule too much at either end of your trip. However, you might be surprised how quickly your little ones bounce back. Some parents have reported their kids got over jet lag way faster than they did!

Some parents try to adjust their kids’ sleeping schedules before they depart on a trip. This can work if the time difference is three hours or less, such as when flying from New York City to Los Angeles. If your kid normally goes to bed at 8:00 p.m. EST, you can try creeping this time up a little earlier in the week leading up to your trip. If you can get them down around 6:00 p.m. and wake them a few hours earlier the week ahead, it can help a lot.

However, it’s much harder to adjust your child’s schedule for bigger time changes, such as traveling internationally. For example, if the new time zone will be eight hours behind, adjusting their bedtime an hour or two while you’re still home won’t make much difference. In that case, it’s best to wait until you land, and do everything you can to synch up then.

Most importantly, don’t deprive your kids of sleep during any part of a long journey. Some parents intentionally skip naptime before a long flight, in the hopes their kids will conk out on the plane.

Although this might seem like a good idea, plenty of kids get overstimulated when they’re on a plane. This means you risk entering that “overtired” phase, during which kicking, screaming, and full-on meltdowns occur. You can avoid this by sticking to your child’s normal sleep schedule as closely as possible before you depart.

And don’t forget to wear them out! It’s okay to arrive at the airport early, as long as you’re ready to engage in a long game of chase. Have them climb steps, bust out a mini dance party, or even do some kids’ yoga right there at the gate. Ignore any stares because, honestly, everyone will be grateful when you bring an exhausted child rather than one with excess energy to burn on a long flight.

Obviously, getting enough sleep is key for everyone to feel calm, rested, and sane during long-distance travel. That’s why it’s important to take some extra steps to ensure your kids will actually sleep during a long-haul flight. For shorter flights, don’t worry too much—they’ll catch up on sleep once you arrive.

RELATEDEverything You Need to Know About Flying with Car Seats

So, what can you do? Here are some tried and true approaches other parents have found can make a big difference. Think about what’ll work for you and your family, and go from there:

Many parents are so desperate for their little ones to sleep on longer flights, they resort to supplements or medications, such as melatonin or Benadryl. There’s a lot of controversy and debate about “drugging” your kids to sleep on long flights. Some parents swear by it, while others report that it totally backfired.

Our verdict is to talk to your pediatrician about whether these options are a good idea for your children.

One of the best things weary, jet-lagged travelers can do is get as much natural light as possible. The human body is pretty amazing at resetting its natural circadian rhythms, as long as you actually step outdoors.

For kids, you want to find something that will be engaging and stimulating, without exhausting them too much. An outdoor playground is ideal, or even a nature walk (don’t forget the sunscreen). Going for a swim can be refreshing and invigorating—especially if it’s an outdoor pool. Just don’t try to hit up a stimulating amusement park on your first day.

If you have a super-long layover, see if you can leave the airport. Head to a nearby park and get a good dose of fresh air to help ease any general travel exhaustion.

It can be tempting to collapse when you arrive at your destination, regardless what time it is. This is especially true if you or your kids didn’t sleep much on the flight. However, sleeping the entire day away is the worst idea. It’ll only prolong the jet lag, and cause everyone to wake up in the middle of the night.

Naps are a good idea for everyone. Just make sure you set an alarm and wake everyone up within two or three hours. No one should sleep more than three or four hours during daylight. Trust us—you have to respect the current time zone, and that means trying hard to stay awake.

It might take a few days (or even a week) to reach your child’s normal bedtime, and that’s okay. Just try to shift it by 15 to 30 minutes every day.

Also, if you’re traveling between the northern and southern hemispheres, keep in mind the seasonal changes will also affect everyone’s sleep patterns. For example, if you’ve left winter for summer, it’s natural your kids will go to bed later due to the extra sunlight.

Alternatively, you can travel with a roll of blackout window film to spread across the window, and transform the room to total darkness. It’s reusable and easy to toss in a suitcase.

Remain as Flexible as Possible

Jet lag is a normal part of traveling long distances. Some people, including kids, are more affected by it than others. If it’s your first major trip, you might not know how everyone will react. But try not to stress about it too much, as that never helps.

It’s important to schedule a “rest day” at the start of your trip, during which you can stroll in the park, take a swim, or do an easy tour. Don’t try to jump right into traipsing all over a new country, with a million activities on the docket.

At the same time, you don’t want to hole up in your hotel room like a vampire family. You gotta get out and do something, even if it’s low-key.

Also, be mindful of driving right after a long-distance trip. It’s better to take public transport or stay close to the airport and allow your mind and body to sync up before you attempt a long drive. Plus, kids hate being stuck in the back of a car after a long, cramped flight. Let them have some time to run and be free.

Most people focus on the trip to a destination and don’t think much about the trip home. Jumping right into your normal life after a fun vacation can be a struggle for everyone. Allow a transition day or two after you return. Definitely avoid scheduling flights the day right before you have to return to work and school.

A lot of parents are wary of long-distance travel, fearing what it’ll do their kids’ schedules, sleep cycles, and general moods. But it’s not as hard as you think! If you can remain flexible, allow adequate time for rest, and make sure to get outside, you’ll have a wonderful adventure with your family! 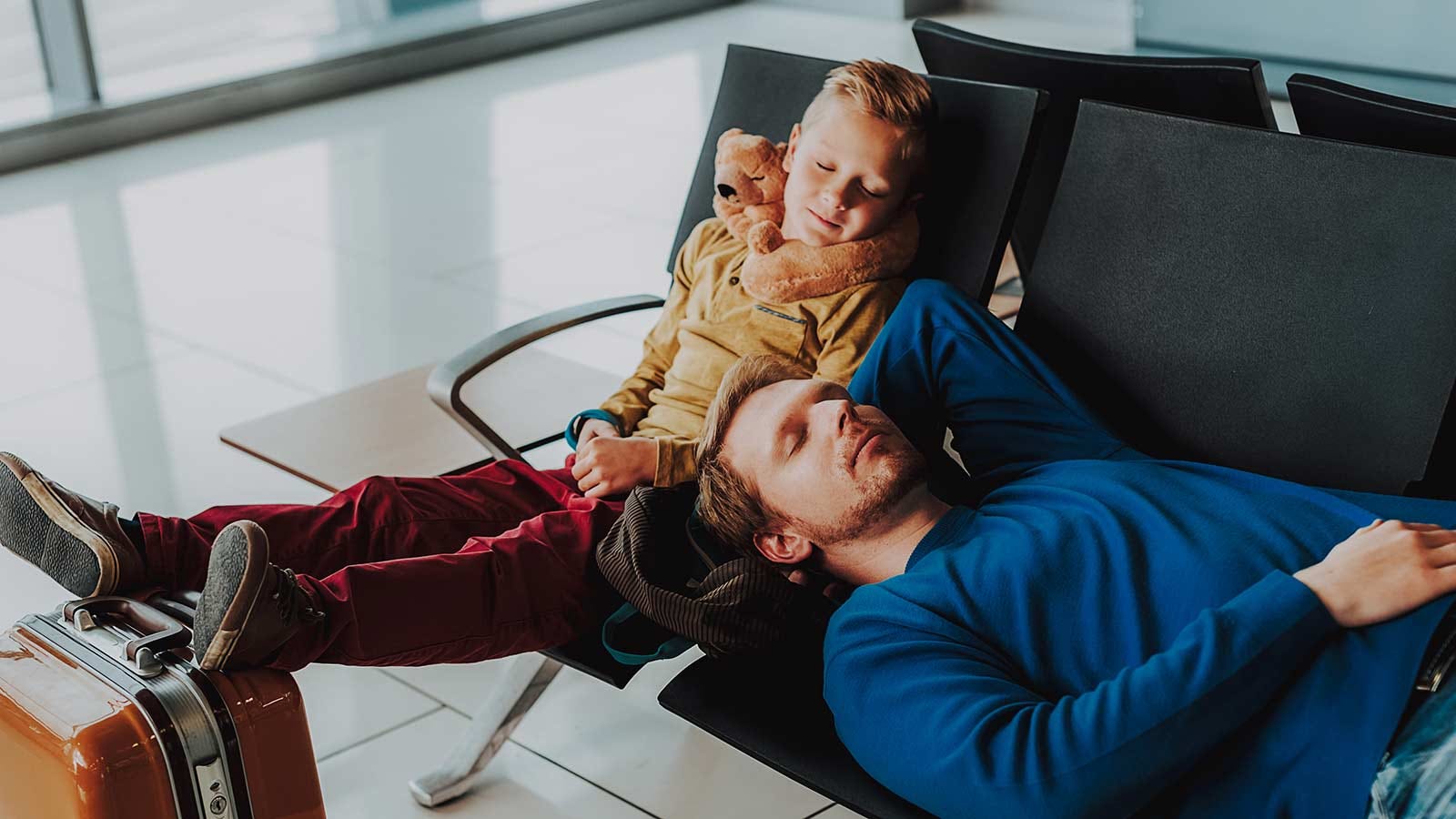