Whether it’s the two-buck chuck or the cookie spread, Trader Joe’s is no stranger to iconic products. One of them, however, may be about to get dethroned. Trader Joe’s Kale Gnocchi just dropped, and the green, updated take on the traditional potato pasta may see the demise of one of the grocery store’s most lauded staples.

According to the Trader Joe’s Dig In, the new kale gnocchi made its grocery aisle debut last week—just in time for all you carb-cutting, Keto-attempting New Years resolution makers. The new version of vegetable-based gnocchi is created using 50% real kale, which is then combined with potato starch and chickpea flour to give it the pillow-like texture that gnocchi lovers crave. If you’re worried about other additives to make the product taste good, don’t be. The only other ingredients you’ll find in the new gnocchi are salt and extra virgin olive oil.

The best part, though? While cost may vary slightly by location, the new gnocchi rings in around $2.70.

The new kale gnocchi comes just under two years after the launch of Trader Joe’s now-iconic cauliflower version of the pasta. The first iteration of the creation hit shelves when the cauliflower craze was at its peak, and everything from pizza crust to rice was being replaced with the vegetable. TJ’s hit product was born.

One Google search will reveal just how popular the gnocchi has become. From advice on the best way to cook the food (do you boil ’em? Mash ’em? Stick ’em in a stew?) to ideas on how to serve the pasta in unique recipes, the internet is all about Trader Joe’s gnocchi, and the veggie versions aren’t the only ones.

The affordable grocery chain has a myriad range of gnocchi, but perhaps the most far-reaching departure is the brand’s Chocolate Lava Gnocchi — yes, yes, it does sound like heaven on earth. Trader Joe’s innovators were inspired to create the treat after visiting a chocolate shop in London, and the resulting creation from TJ’s Italian product creator was hazelnut chocolate filled cocoa-flavored gnocchi that’s definitely not as nutritionally sound as kale or cauliflower.

If you are a fan of the brand’s OG cauliflower gnocchi or love its chocolate version, Trader Joe’s kale gnocchi may be your new go-to. 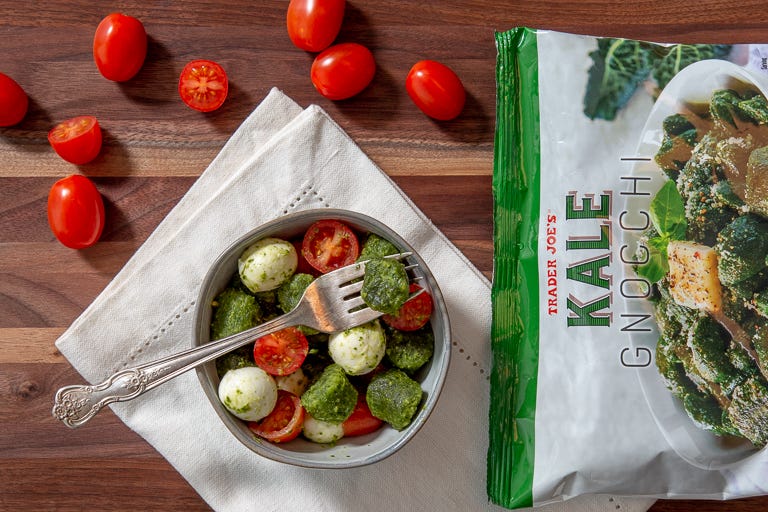