PIVOT! Into your kitchen that is, and not with a couch. A new Friends-themed novelty has hit the internet. Although it might not ease the pain that your favorite late ’90s/early ’00s sitcom is no longer on Netflix, cooking might become a bit more fun. The Friends slow cooker that recently hit the internet will have you reminiscing over those late-night binge-watches while allowing you to cook a meal as delicious as one of Monica Geller’s.

RELATEDSlow Cooker Sipping: 7 Mulled Wines to Warm You Up This Winter

The slow cooker is up for grabs over on BoxLunch, an online retailer home to a plethora of fandom-based merchandise. While Friends isn’t necessarily considered a fandom in the traditional sense, it’s hard to deny just how popular the sitcom—which ended in 2004—has remained, even among those who were just kids when it first aired over 20 years ago in 1994. Now, everyone, whether they’re 21 or 61, can enjoy the convenience of a Friends slow cooker.

Currently, the Friends slow cooker is, unfortunately, sold out. There could still be hope. Given its popularity, there’s a good chance that BoxLunch will restock the item. To keep track of its status, add it to a wishlist on the site, and you’ll be one of the first to snag it if it makes its way back.

In the meantime, though, BoxLunch isn’t exactly short on Friends merch.

With the Super Bowl coming up, you might need to cook for a crowd. If party dips are your thing, the Friends three-pot slow cooker is still available on the site.

If cooking isn’t really your thing (even with such an amazing slow cooker), don’t worry. You have plenty other items to peruse: From logo sweatshirts to wine glasses to hats, there’s plenty of merch—slow cooker or not—to go around for Friends fans. 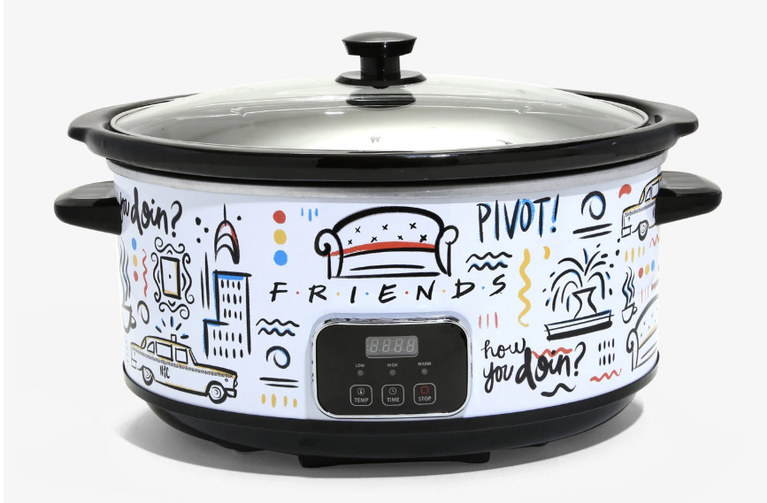