If you haven’t been watching Disney’s The Mandalorian, are you even watching television at all? The hit show on Disney’s streaming service has been a smash and has created quite the unexpected hero. And no, it’s not Mando himself. Baby Yoda has become the must-see star of the series, and now Baby Yoda ice cream cones exist at an LA gelato shop. You’ve got to see how amazing they are.

According to PopSugar, LA based gelato shop Eiswelt Gelato has created an adorable remake of Baby Yoda in gelato form. The outlet reports that the gelato cone is created using any of the shop’s green flavors like pistachio, matcha, avocado, and green tea. Plus, you can get the sweet Star Wars-themed treat in a bowl if you don’t want your Yoda to melt on your hand.

The adorable gelato seems to have been created using a single scoop of one of the green flavors, two black cookie eyes, and pre-made green and pink ears meant to resemble Yoda’s signature feature. While Eiswelt Gelato is not claiming the dessert is Baby Yoda (you know, copyright and all that), it’s hard to deny that’s exactly what this cone looks like.

If you want to get your hands on one of them and live in the Los Angeles area, the gelato store will be serving the alien snack until the end of February. Eiswelt Gelato has tons of other clever creations. The store features everything from a unicorn to a bear ice cream cone, and the store even serves a watermelon gelato cone that looks adorably like a cat.

While Baby Yoda ice cream cones won’t be around forever, this gelato shop might have inspired a new trend. 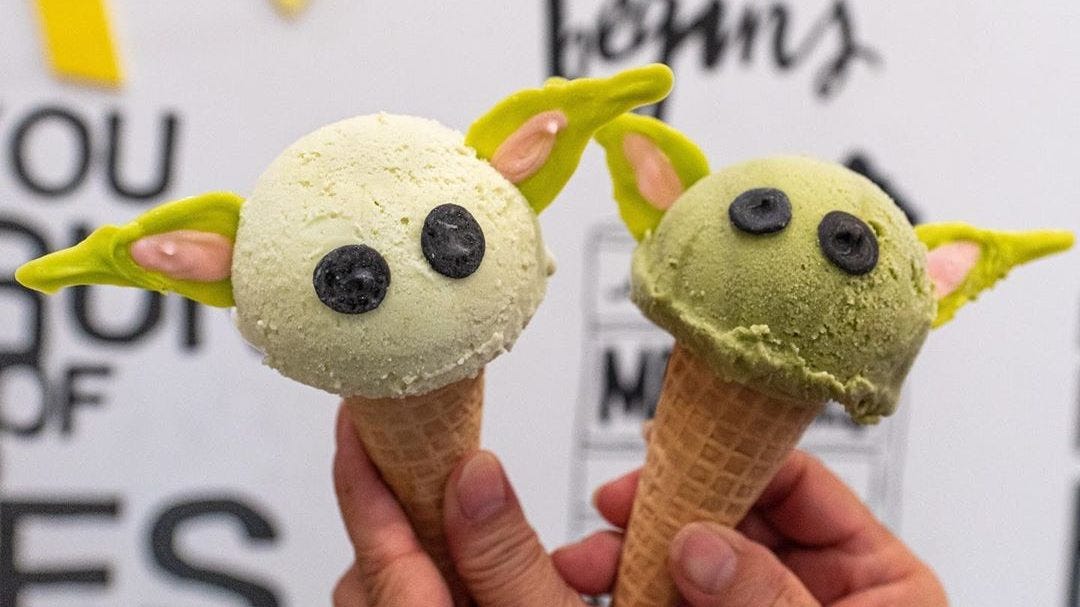