Whether you are a Peeps lover or not, brace yourself. The bunny-shaped Easter candy has already returned in a multitude of forms, including coffee creamer and cereal. There’s more. Hot Tamale Peeps are apparently a thing, so if you love the cinnamon hotness of classic Hot Tamale candies and the smooshy texture of a Peep, your spring just got a whole lot better.

According to Instagram account Junkfood Mom that’s known for finding the oddest snacks and reviewing them online, the new Peep flavor is very real. She was lucky enough to find them in her local Kroger, so if you’ve got one of the big box grocery stores in your town, it’s the place to look. As for her review, though, the Hot Tamale flavor is a little lackluster. She explains in her post that she expected a strong, spicy cinnamon flavor from the Easter candy but instead just got a hint of it.

For Hot Tamale purists, that’s not good. However, for those who are sensitive to spice or even for snackers that are a little less adventurous than others, the new Hot Tamale Peeps may be a win.

If you think this team-up seems out of left field, there’s actually an explanation for it. Peeps’ parent company is, well, the Peeps Candy Company, but it’s also the parent company of Hot Tamales. This pair of candies coming together isn’t quite so shocking anymore, is it? Could the Hot Tamale Peeps be an indicator of more to come?

Peeps also owns famous fruity candy Mike & Ike’s and the chocolate and peanut-based Goldenberg’s Peanut Chews. Peeps has made chocolate versions in the past, and creating a fruit-flavored version can’t be so hard after you’ve injected these bunnies with cinnamon.

For now, though, it seems that Hot Tamale Peeps are the only hybrid on shelves. You’ll just need to hunt those bunnies down first. 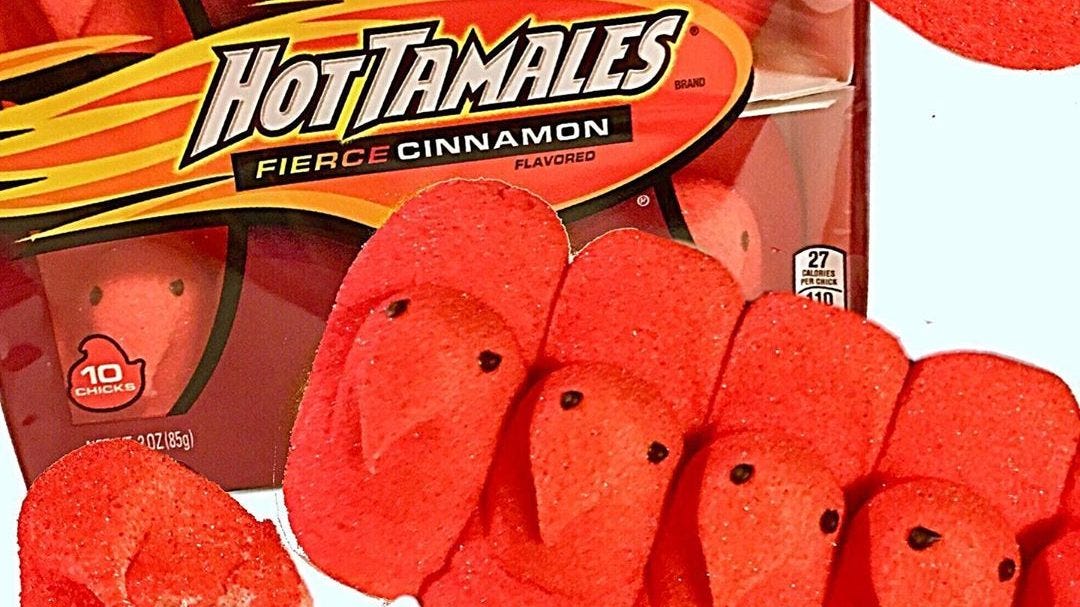