Every great cook knows the magic of spices. But pre-ground varieties lack in flavor and punch. To elevate your cooking skills, and impress your foodie friends, grind your spices at home. The process is simple, and the resulting flavor will make you wonder why you never tried it before.

It seems so much easier to buy a bottle of ground nutmeg, or allspice, or even black pepper at the grocery store. But you end up saving a little bit of effort at a pretty massive flavor cost. See, as soon as spices are ground, their potency begins to dwindle. The bottle of ground cumin you buy today will have wholly lost its flavor a few months down the road.

Whole spices can be stored much longer without any effect on their flavor power. Place them in an amber-colored jar, someplace dark and cool, and they’ll hold their flavor for up to a year! And, since spices are most potent directly after grinding, your food is almost sure to taste better with less seasoning used, saving you money in the long run.

Grinding spices yourself isn’t hard, and there are many ways to do it. What you choose is a matter of personal preference and how much seasoning you need in any given dish.

This is the most traditional route by far, and there’s nothing wrong with it. Fans say it’s the best route to release the delicate oils that give a spice its flavor. But it does take a little elbow grease, so it’s not so great if you need a lot at once.

Great for spices, guacamole prep, and any odd mystical spice grinding required for your next batch of potions.

Should you decide to use a mortar and pestle for spices, avoid cleaning it with soap. Brush it off, rinse it out, and let it dry. Soap can leave fine residues that will latch on to your spices later, creating off-putting flavors in your food.

A coffee grinder is by far the fastest way to grind spices. However, we don’t recommend you use one that’s needed for your morning brew—keep a dirt cheap blade grinder on hand for spices.

Coffee and certain spices don’t mix, and it’s nearly impossible to clean out a grinder so thoroughly that every ground is captured. Label one grinder “spices” so there’s never any confusion. Unless, of course, you enjoy clove flavored coffee, that is.

Hand-held grinders are fantastic for spices you use daily, like black pepper, or spices you use in small amounts. If you’re feeling like a little DIY magic, you can attach the central grind shaft of a pepper mill to a battery-powered drill. Spice grinding goes a lot faster that way, and honestly, it’s way more entertaining.

If you need more detailed instructions, check out this video from the master of cooking hacks himself, Alton Brown.

Grinding spices yourself is an easy way to make your cooking stand out, and it can save you money. More potent spices to start with means you won’t need as much in any given dish. And, it’s easy to do.

Channel your inner hunter-gatherer with a mortar and pestle or take it to the 21st century with a pepper-mill-power-drill combo. Either way, once you’ve tried it, you’ll probably prefer grinding your own spices. 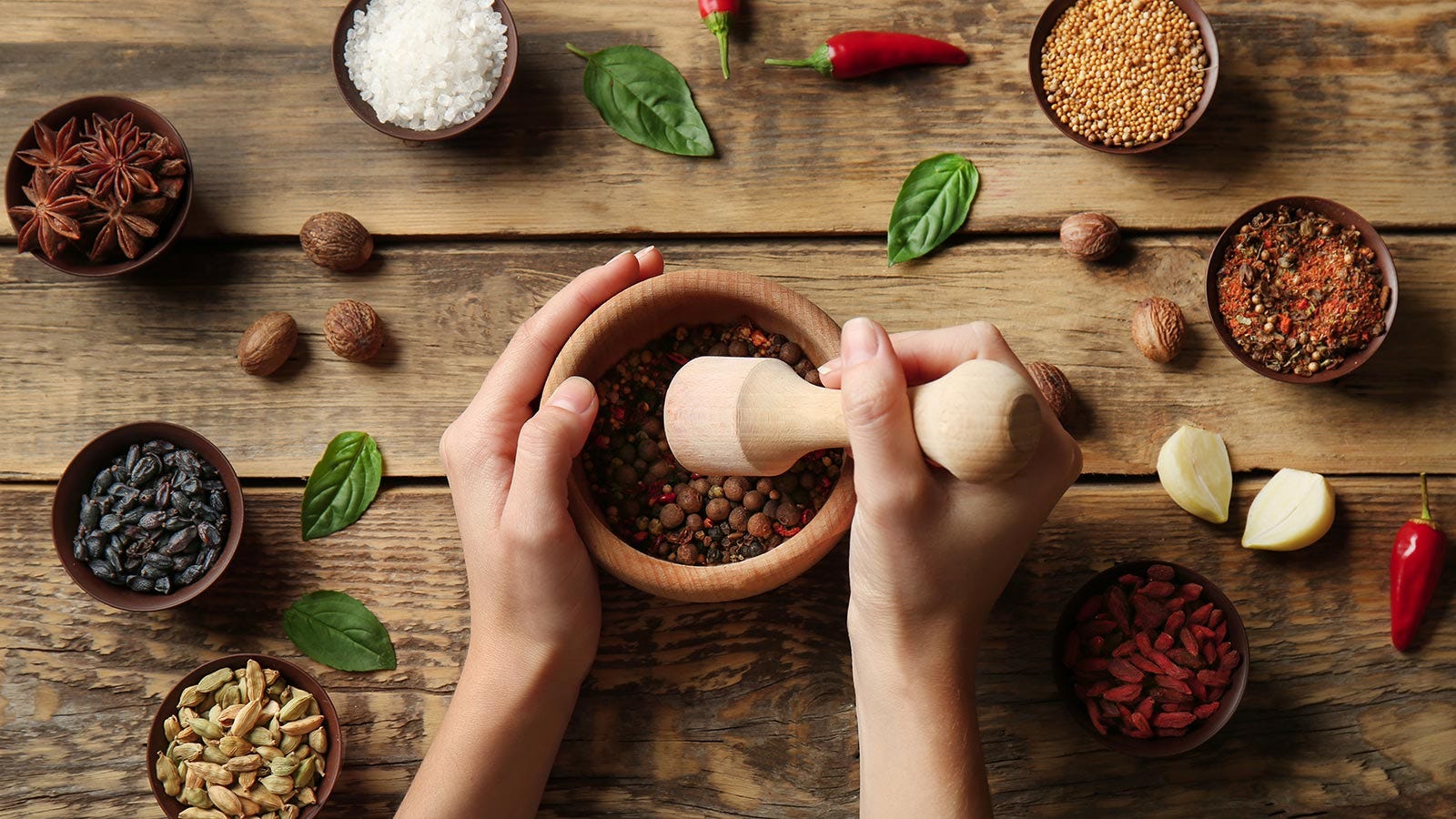