Surprisingly, though, that isn’t even where the story begins. If you go back even further in history, you find that the roots of Valentine’s Day might be even more shocking than the execution of saints.

Ever heard of Lupercalia? If not, you’re in for an entirely new perspective on V-Day. Let’s take a look at the dark, dirty origins of the world’s sappiest holiday.

It Started with a Pagan Festival

In ancient Rome, Lupercalia was celebrated on February 15 every year. It was a wild Pagan celebration of sex, violence, and fertility.

Scholars don’t agree on whether Lupercalia directly morphed into Valentine’s Day, but it’s a popular theory. Because it was celebrated on February 15, and so many modern holidays are rooted in Pagan traditions, it’s easy to see why some believe there’s a connection.

While our modern Valentine’s Day celebration is all about gifts, dates, and candy, Lupercalia was a much earthier festivity. Historians know it was celebrated at least as early as the 6th century B.C., but it’s possible it’s even older than that.

The word “Lupercalia” was likely derived from “lupus,” the Latin word for “wolf.” The name of the festival was probably referencing Romulus and Remus, the founders of ancient Rome who—according to legend—were raised by a female wolf. Lupercalia is also connected with Lupercus, a Roman fertility god.

How to Celebrate Lupercalia

So, how did one celebrate this Roman holiday? Well, the traditions involved a lot of blood and gratuitous sex, so don’t try this at home.

The festival began at Lupercal Cave, which was believed to have been the home of the wolf that raised Romulus and Remus. The Luperci (the priests of Lupercus) got naked and slaughtered male goats and a dog in the cave. They ritualistically smeared themselves with blood in the process.

Then, they skinned the goats and took a nude tour around Rome’s Palatine Hill, hitting women with strips of fresh goatskin (the two paintings above depict this part of the celebration).

If you were one of the lucky ladies who got smacked with animal skins, you would now be more fertile (or so they believed). This ritual might have been connected in some way to the sexual goat-god Pan, who, according to Ovid, was also celebrated during Lupercalia.

Some historians even think Lupercalia had a match-making element, for which men would draw the names of women out of a jar in a sort of sex lottery. Sometimes, the couple would only stay together for the festival, but, occasionally, the match would lead to marriage.

And, of course, since few Pagan celebrations were complete without a feast, the feast of Lupercal followed the ritual sacrifice.

These days, you’d be hard-pressed to convince anyone to join a Lupercalia festival complete with animal sacrifices and random sex. Still, a few traces of the ancient festival remain in our Valentine’s Day celebrations.

For example, the signature red and white colors of Valentine’s Day might symbolize the blood of the sacrifice, and the milk the priests used to ritualistically clean it up.

Of course, the most obvious link is the sexual match-making and Valentine’s Day’s romantic focus. Lupercalia’s take on the theme was just a little more. . .intense.

However, even in ancient Rome, Lupercalia grew tamer over the years. People gradually started leaving their clothes on during the celebration, and animal sacrifice was also eventually prohibited. It was Pope Gelasius who finally abolished the celebration altogether.

To this day, historians still debate the precise link between Lupercalia and Valentine’s Day. But even if Lupercalia didn’t directly morph into Valentine’s Day, it certainly provides some interesting context! When you think about what the ancient Romans were doing at this time thousands of years ago, you get quite an interesting new perspective on what we do now.

While people continue to celebrate many Pagan holidays, Lupercalia (understandably) isn’t one of them. It’s just a little easier to sell people on chocolates and flowers than goat sacrifices and nude beatings. 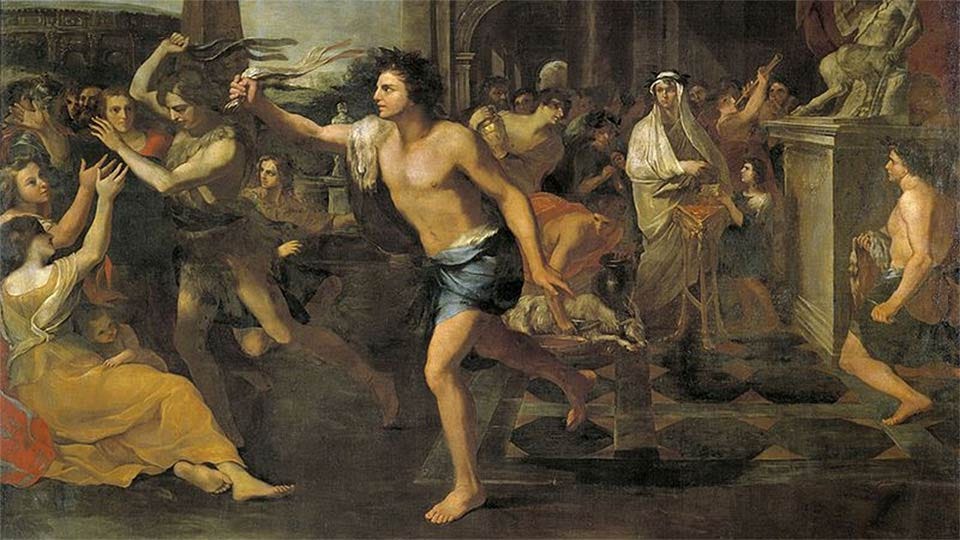