While a cornstarch slurry or roux are pretty standard ways of increasing the viscosity in soups, there are other methods you can use to get similar results. We’re sharing eight clever soup-thickening agents you’ve probably never tried.

Before you can determine which thickening technique would be best, you have to know what consistency you’re striving for. The type of soup you’re making and the ingredients you’re using will all make a difference, but that’s why we’re breaking it all down.

We’ll start with the basics. A roux or corn starch slurry is the first thing you’d likely whip up when you have a creamy chowder or other cream-based soup that needs thickening. A roux (pronounced, rü) is made of equal parts flour and fat.

This thickening agent works well, but doesn’t offer the same lusciously rich appeal of a roux. Whenever you’re looking for roux alternatives, any of the tricks below will add a unique quality to your soup.

If you’re hoping to achieve a broth that has more body than the typical thin liquid, adding a handful of uncooked rice or pasta usually does the trick.

When you add either of these to a soup, starch is naturally released after they simmer for a while. This, in turn, thickens your broth. This tip works particularly well for chicken or turkey noodle and rice soups, especially if you want a more viscous liquid.

Mrs. Miller’s Old Fashioned Medium Egg Noodles are perfect for this, and they’ll also taste delicious in either kind of soup.

An authentic seafood bisque boasts an exquisite flavor that satisfies the soul like nothing else. The goal is to capture the flavor of the main ingredient, which comes from a stock made from the shells. Although most people don’t use this technique anymore, it certainly does the trick.

Take, for example, a traditional lobster bisque. After steaming the lobster, rather than ditching the shells, you add them to the pot, along with the stock. Then, just watch as the bisque comes together.

When it’s ready, put it in the blender, shells and all. The shells will then thicken the bisque into a flawlessly sumptuous meal.

Puréed Rice or a Bean Slurry

While ground shellfish shells are used to create a true bisque, most modern recipes use puréed rice as the thickening agent, instead. As we mentioned previously, sometimes rice is added to the broth, and then the starch it releases thickens the liquid.

However, another popular way to add body to this luscious soup is by leaving the rice in and puréeing it in batches. You’ll end up with an incredible, velvety mouthfeel.

A bean slurry is another fantastic way to add a thick and creamy consistency, while also getting all the health benefits beans have to offer. Bean slurries are especially popular with folks who are on gluten-free diets and vegans who don’t want to make a roux with butter.

White cannellini beans tend to work best for this technique. Just combine one part beans with one part of the hot, flavorful broth, and then purée. You can use an immersion or any other blender to do this.

If you prefer a nutritious way to thicken your delicious soup, cooked and puréed vegetables are the answer. Not only do they add a fresh, rich flavor, but you’ll be consuming tons of nutrients, as well.

RELATEDPut That Blender to Work with These 6 Creamy Soup Recipes

After cooking them, simply remove a portion (or all) of the vegetables from your soup, purée them in the blender, and then add them back to the pot. The more veggies you purée, the thicker your soup will be.

Puréed nuts add an alluring, earthy flair to soups, stews, and gravies. They’re also an excellent way to bulk up that base broth.

Just throw almonds, walnuts, or cashews in a high-powered blender, and then blend on High until you get a gorgeous nut paste or butter. Add this to your hot broth and you’ve got a thick base with a delicious, nutty flavor.

Never throw that extra cup of mashed potatoes away! It could lend you a hand in your time of need. That is, if you lack every other thickening agent we’ve covered here. Mashed potatoes make an excellent addition to creamy soups, but especially chowders that feature potatoes.

If you’re making a corn or clam chowder, for example, set 1-2 cups of broth aside. Pour them in a saucepan, and then bring it to a simmer. Slowly whisk in about 1 cup of mashed potatoes, until they thin out into a slurry. Then, mix that right into your soup and enjoy every tasty slurp.

Instant mashed potato flakes can also work wonders to thicken up potato-based soups. Just sprinkle some in your soup and watch as that thin broth becomes rich and creamy. Potato flakes work especially well with ham and cheddar or baked potato soups, and various creamy chowders.

Whether you have a dietary restriction or are simply lacking the necessary ingredients to make a roux, one of these methods will work in a pinch for a delicious, creamy soup. Now that you know how to thicken any broth, it’s time to carmelize those onions and make French onion soup. 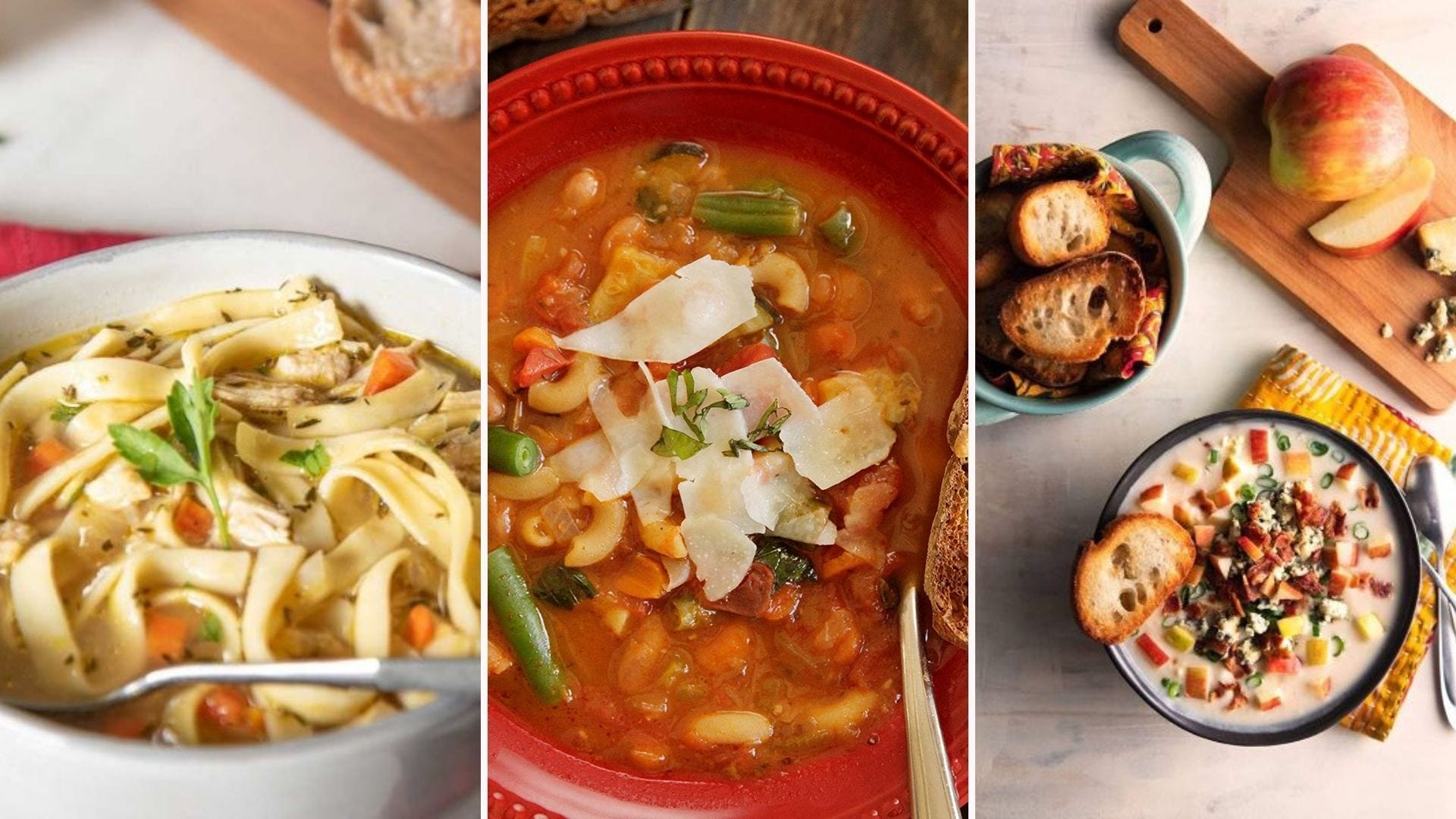