From squirrel soup to hard cider before breakfast, our former presidents each had (or have) a love for some unusual food choices. Learn the story behind each of these (sometimes bizarre) culinary quirks.

Some loved fine dining, while others enjoyed the simple pleasures of sweet and natural honey. Learn what our former presidents loved most, and try some of these famous recipes while you’re at it.

During the 1800s, it was common for presidents to use food and alcohol to ply potential voters into voting for them. Harrison offered burgoo, (which is squirrel and vegetable stew) as well as plenty of hard cider to his voters.

This method certainly seemed to have worked for Harrison. Although he served a short term (only one month), he became known as “The Log Cabin and Hard Cider Candidate.”

Both of these presidents sure seemed to have a thirst for hard cider. John Adams even enjoyed a glass before breakfast in which he called “a morning gill.”

Honest Abe was known to be a modest eater and enjoyed most simple meals. His days typically started with a hot cup of coffee, then a single egg and piece of toast. A biscuit and glass of milk was a pretty regular lunch if eaten at all.

By all accounts despite rising to the office of the Presidency, his dietary habits remained firmly rooted in the culture of his rural farmland upbringing. He was by no accounts a gourmand, preferred simple foods, and even ate lightly as his tall and slender frame suggested—Honest Abe definitely wasn’t destined to go down in the history books as the most rotund president by any measure.

Eisenhower Had a Passion for Doing the Cooking Himself

Eisenhower loved cooking and indeed had a knack for this fun hobby. While we can all agree, presidents don’t have much time to spend in the kitchen; this president made time for it.

His favorite meal to prepare (and eat) was old-fashion beef stew, and he often cooked it for close friends and family. Courtesy of his presidential library, you can even browse his personal cookbook.

Check out his famous old-fashioned beef stew recipe online and give it a try for yourself.

Get the Recipe: Eisenhower Library

President Garfield savored squirrel stew, according to his disbursing officer at the time. Unfortunately, during his short term in office, Garfield was shot and suffered through illness and pain, with a very scarce appetite.

His disbursing officer thought that he could tempt the president with squirrel soup (his favorite), and granted a permit to shoot squirrels at Garfield’s home. Unfortunately, he never was well enough to eat the stew he loved most.

However, one thing he was able to stomach, was his favorite drink—wholesome milk. A cow was even sent to the Whitehouse to ensure Garfield always had a fresh supply.

Fresh fruit, salads, meatloaf, and of course, cottage cheese were amongst some of the favored foods often consumed by the Nixon family. None of that is particularly bizarre, except for President Nixon’s habit of putting ketchup on his cottage cheese. If putting ketchup on steak is considered a culinary faux pas of criminal proportions, we’re not even sure what to make of putting the tomato-based condiment on a bowl of cold cheese curds.

However, nothing compared to his love for Mrs. Nixon’s homemade meatloaf. This recipe often appeared on the menu during family dinners, and thousands of fans received it upon request. The recipe even appeared in a collection of First Family recipes, the White House Family Cookbook by Henry Haller—though we were able to find a copy of former First Lady Pat Nixon’s meatloaf recipe here if you’d like to take a crack at it.

President Kennedy enjoyed a simple poached egg with toast for breakfast and was described as a soup, sandwich, and fruit kind of man for lunch. He was especially fond of soups, fish chowder being his absolute favorite.

Mrs. Kennedy, however, had a refined palate for elegant and gourmet foods, and her exceptional entertaining was well-known at the time. Her preference was in French cuisine and found a French Chef soon after moving into the White House.

The style of cooking and exquisite flavors the chef brought to each dish were a success. Amongst many family favorites, Poulet, a L’Estragon (Chicken with Tarragon), was a frequent dinner staple.

Reagan Always Kept a Container of Jelly Beans on His Desk

While Reagan ran for Governor of California in the ’60s, he had jelly beans shipped to his office each month in an attempt to give up pipe smoking. It was a success. He continued to receive shipments of these colorful candies throughout his two terms in office as well.

In the ’80s, Goelitz Candy Company (now Jelly Belly Candy Company) received official authorization from the government to develop a Jelly bean jar with a Presidential seal. His favorite Jelly Belly flavor was licorice. If having a jar of jelly beans on your desk sounds like fun, skip paying hundreds of dollars for an old vintage Reagan-era presidential jar and pick up an official Jelly Belly apothecary jar here.

Before we dive in too deep, let us explain what the heck “leather britches” is. Simply put, this dish consists of green beans cooked with bacon and water.

These beans were traditionally strung on thread and hung until they dried out before eating. Once dried, the beans would tend to shrivel up and appeared to resemble leather britches, which is where the name derived.

Jackson enjoyed this dish, as well as braised goose or duck. He also loved fried ham and gravy as well.

Get the Recipe: Taste of Southern 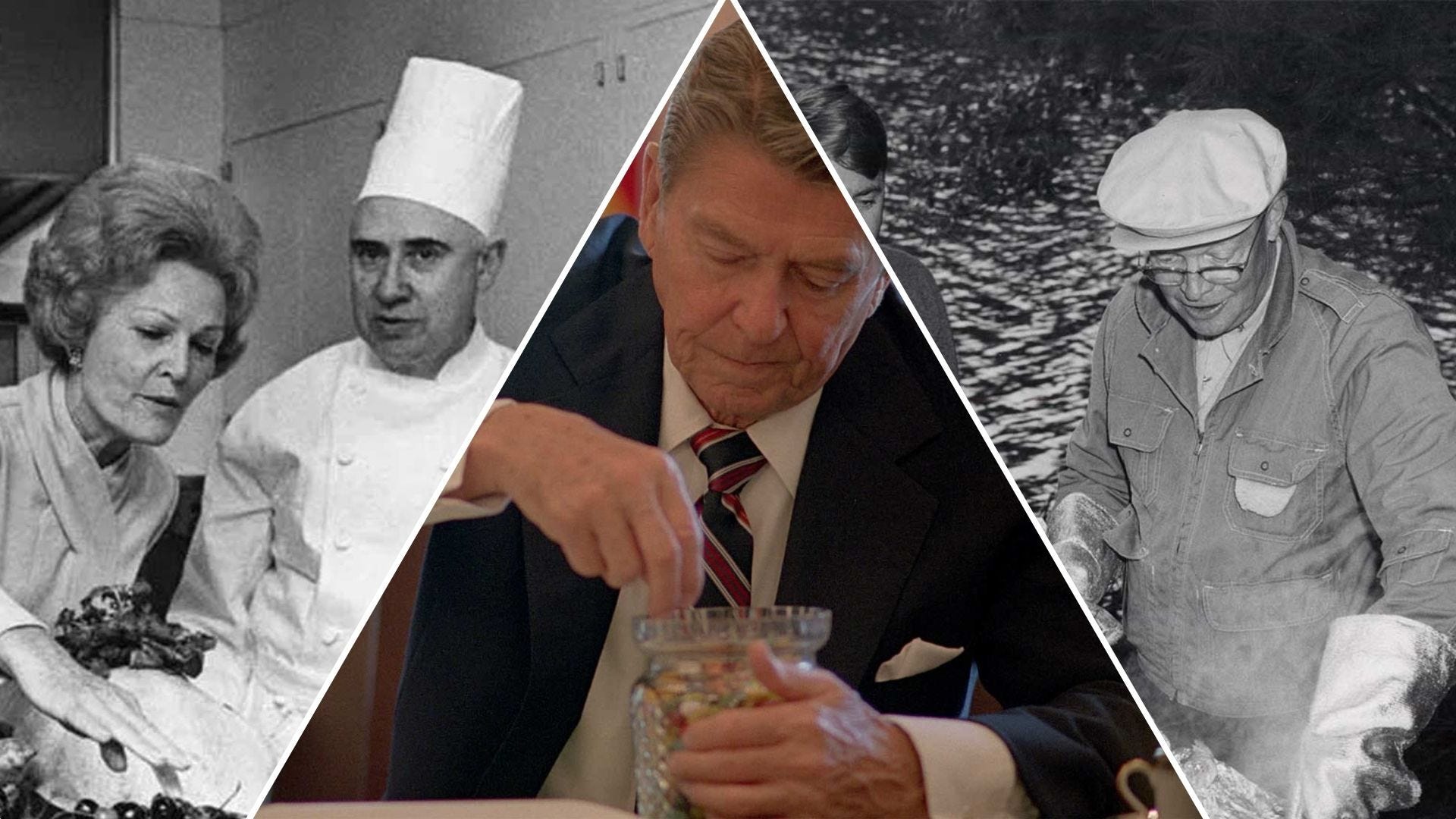