We’ve heard about the benefits of stretching before a workout, and we’ve also heard that it can be a bad idea. So, what’s the real story?

Whether it’s to prevent injury or to increase strength, the standard consensus is that a sensible routine should include enough time to stretch. It’s a belief that’s been deeply instilled in our sports culture for decades—and yet scientific research hasn’t produced enough evidence to support it fully. On the contrary, the research we have so far tells a different story.

Let’s look at the science behind stretching and its effectiveness (or lack thereof) as part of a workout routine, so you can make up your own mind about whether or not to stretch.

When Did We Start Stretching?

The idea of stretching for overall health has been around for centuries. One of the first physicians to explore the effects of stretching our bodies was Hippocrates, who led to the inclusion of such movements in the training routines of Greek athletes and warriors.

However, it wasn’t further studied until the late 19th century with the rise of osteopathy and chiropracty, two forms of alternative medicine focused on the physical readjustment of muscle tissue to restore health.

It took decades for science to begin yielding clear evidence about stretching. To this day, we still lack clarity about what really happens in our bodies when we stretch. Yet the idea that it’s highly beneficial is widespread: injury prevention, performance enhancement, pain treatment, and flexibility are the key hypothetical rewards that keep us hooked.

Is Stretching a Good Warmup for Injury Prevention?

We’ve been told that before we begin any workout, it’s imperative to stretch to warm up our muscles.

The act of stretching every muscle group and the surrounding connective tissue for up to 45 seconds at a time, also known as static stretching, is meant to prep the body for the physical activity to follow, thus preventing injuries like muscle strains and sprains. It’s a premise similar to that of warming up the car engine during winter to avoid damage.

And yet, none of that is technically correct.

In an extensive 2011 review of over 4,500 studies, researchers found extensive evidence showing no significant effect of static stretching on muscle performance. They did, however, find extensive stretching to be detrimental to muscle strength.

Further evidence was found in two other separate studies. In one, a pre-run stretch was shown to reduce the capacity of muscles to generate explosive force (the kind of energy needed for sprinting) and slow down athletes. A paper published in the British Journal of Sports Medicine presented similar findings, showing no preventive benefits of stretching for leg injuries in joggers and shoulder injuries in swimmers.

These results find support in a myriad of related studies, some of which even discourage the usage of static stretching as a sole warmup activity.

Given the number of runners and weekend warriors we see rigorously stretching before their daily workouts, it’s concerning that such information is not common knowledge.

Does Warming up Matter at All?

That said, a warmup routine should remain part of our workouts.

Whether it was lifting something heavy or unexpectedly jumping to catch something, most of us have experienced pulling a muscle before. Pulled muscles happen because we weren’t neurologically prepared to respond to such sudden movements. Our level of body awareness was minimal, our coordination and reflexes were not ready, and there wasn’t enough blood and adrenaline pumping through the muscles we used.

By that logic, a warmup routine involving a gentler version of the movements we’re about to do is more likely to help our bodies transition into a state of intense activity.

If you were about to play tennis, you’d do some light squats and big arm circles. If you’re going to play soccer, you might do some hip in and outs and some box jumps. Any sport-specific light exercise that increases blood circulation and muscle contraction is bound to give you a better chance at injury prevention and improved performance than static stretching ever will.

The FIFA “11+,” a prevention program developed by the organization’s medical research center, is clear proof of that. Multiple studies surrounding this warmup regimen have found significantly lower rates of acute injuries in players that performed the exercises with high compliance compared to those who put little effort into it or none at all.

Given that the program includes no stretching, the results have quite an impact. A separate study also showed that dynamic stretching, which involves light movements rather than prolonged stances, does a better job at preventing traumatic and overuse injuries than passive stretching.

So the evidence is clear: a warmup routine that involves aerobic exercises to get your blood pumping and some sport-specific dynamic stretches can help you minimize impairments and enhance your performance.

Now, you might wonder about the other side of the stretching dogma: is stretching after a workout better for you?

The short answer is no. So far, research findings have yielded no significant support for the role of static stretching, before or after a workout, in the reduction of muscle injury as well as soreness.

Prevention of post-exercise soreness is another common reason to include stretching in exercise regimens. However, the closest thing to favorable evidence for that theory is an apparent reduction of inflammation in connective tissue. It would be the perfect explanation for our belief in stretching as a remedy for muscle soreness—had it not been exclusively tested on rats. While the results might be optimistic, they’re suggestive at best and certainly need further exploration.

Considering the extensive findings that show no significant effects of stretching on muscle soreness, it’s safe to assume that nothing can help us from feeling sore the day after a workout. But as always, hard work pays off. No pain, no gain, right?

Does Stretching Improve Our Flexibility?

This time, the answer is yes. However, there’s more to it than we might think.

We’ve been told that the more we stretch, the more we elongate our muscles, improving their flexibility as well as their performance. But although studies have shown that following a stretching program can help us increase our level of flexibility, our muscles don’t actually increase in length.

In fact, it’s just a sensation. Our bodies grow accustomed to specific movements and send signals to the brain telling it to ease up with the pain symptoms. As a result, our tolerance increases and so does our range of motion, allowing us to move more freely in certain ways.

But aside from the increased range of motion, what other benefits do we get from improved flexibility? Scientifically speaking, not many, at least from all the data gathered so far.

One study did show that a supervised stretching program is an effective way to improve gait in elderly patients. But if you’re under the age of 65, training yourself to touch your toes won’t bring you any particular benefit, other than a sense of accomplishment.

So, unless you’re an athlete participating in sports that require a high degree of flexibility, such as aerobics or ballet, you can rest assured that being a little stiff isn’t necessarily a bad thing. Even Eliud Kipchoge, the world’s fastest marathoner, can’t reach his toes!

So, Should We Stretch?

Sometimes we do it right after we wake up, sometimes throughout the day. It’s almost like an instinct. While we should step away from engaging in extensive pre-workout stretching to avoid injuries, nothing stops us from doing some light stretching after exercising or anytime we want.

At the very least, it’ll increase blood circulation while also giving us a feel-good sensation, which might explain why yoga is so enjoyable. However, yoga entails body and mind connection, and a continuous flow of movements. It’s stretching with intent. It can’t compare to passive stretching.

According to the research, a warmup involving sport-specific dynamic stretching and some light aerobic activity appears to work better for injury prevention than static stretching. Muscle soreness cannot be prevented, but if you do decide to stretch at the end of your workout, you will temporarily improve your flexibility, and you will certainly feel good about it. 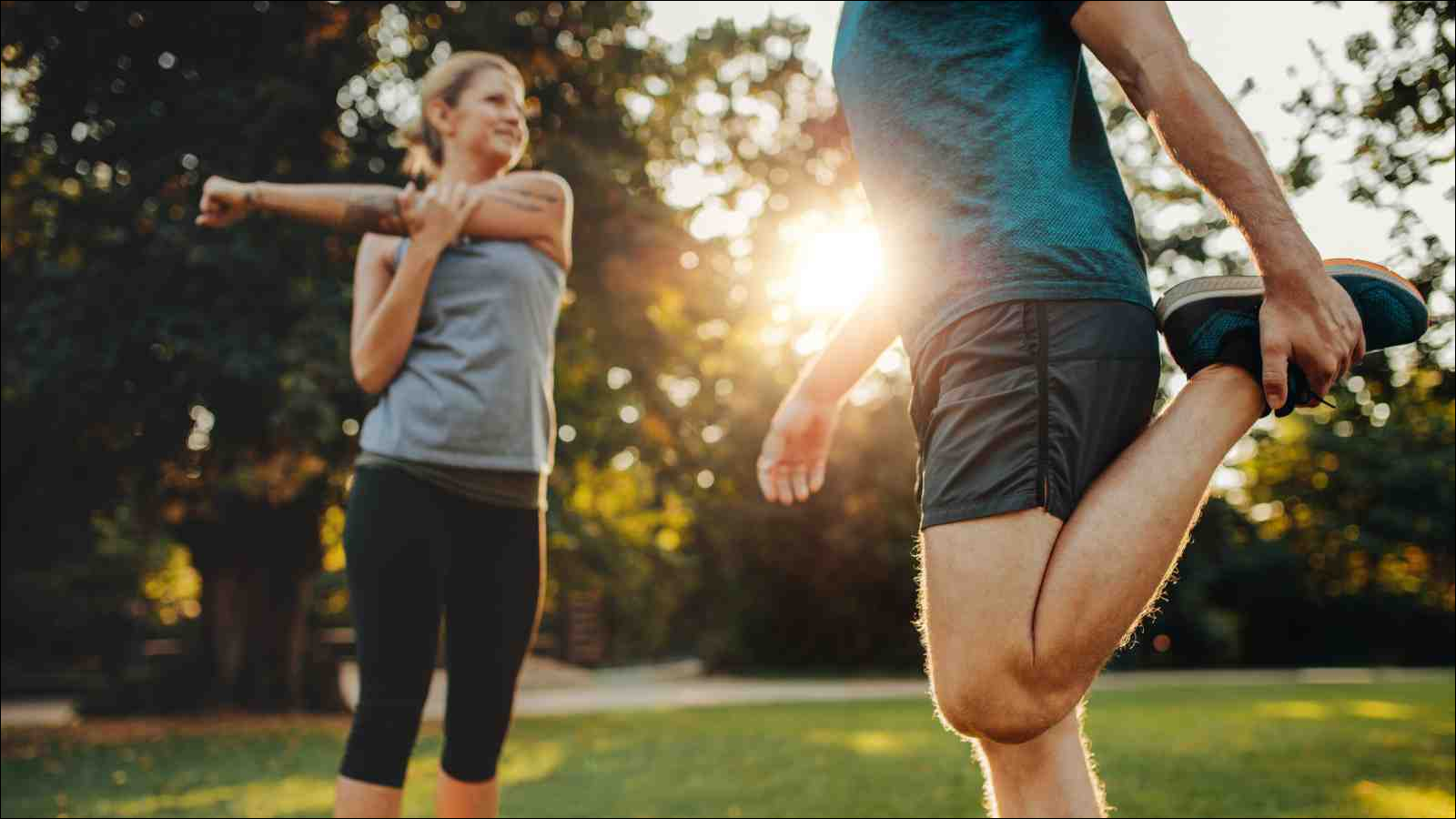