Humans and their forebearers have been waking up to the sun for millions of years, but alarm clocks didn’t arrive on the scene until the 18th century. Nature had quite a headstart on establishing what our wakeup routine looks like.

Of course, alarm clocks are a necessity for most of us in the modern world, like it or not. But wakeup lights, also known as light-up alarm clocks, promise to wake us with a method that mimics sunlight, rather than mechanical screeching.

Research suggests that this method of waking up might have benefits. But are pricey wakeup lights really worth your money? Let’s delve in and weigh the benefits of the latest alarm clock tech.

What Are Wakeup Lights?

Wakeup lights were first popularized by major electronics brand Philips, but many other brands now offer a similar product.

The idea behind wakeup lights is that they gradually begin to glow for about half an hour before the alarm is set to go off. With a steady increase in light, these dual lamp-and-alarm combinations aim to mimic the sunrise. By the time the alarm sounds, the increasing light will have already kick-started your wakeup process, making it easier to get out of bed without hitting snooze.

You pay a premium, but the build quality on the Philips line of sunrise alarm clocks is great.

On some of these devices, the alarm sound itself also offers a more gradual wakeup. Instead of blaring from the start, it begins with a soft sound and slowly gets louder. The whole idea is to give you a gentle, natural push toward wakefulness, instead of the harsh beeping that most of us are used to.

Of course, the idea might seem a bit superfluous because the sun does still rise in the mornings, after all. But using the sunrise to spur the wakeup process just isn’t practical for everyone. You might live in an area where you don’t want to leave your blinds open at night, or where light pollution makes the sunrise less obvious from your bedroom. The farther you live from the equator, the more sunrise varies over the year, too. Sunrise in the northern United States varies by around 2 hours over the year. Regardless of those variables, you might simply need to get up well before or after the actual sunrise.

The Research Behind Light-up Alarms

Philips, in particular, offers research to back its wakeup light claims. According to the brand, in a clinical research study, 88 percent of wakeup light users preferred it to their previous alarm method. With only 477 people in the study, the findings aren’t exactly exhaustive, but it’s easy to see how people might prefer waking up to soft light instead of loud noise.

Our bodies are attuned to natural light as a wakeup signal, after all. Light primes our brains for alertness and activity. Knowing the light from phones and computers can keep us up at night, it’s not hard to see how similar light could help us wake up in the morning.

Waking up to bright light signals your brain it’s daytime while trying to wake up in a dim room can feel next to impossible, no matter how loud your alarm is. In spite of all our technological advancement, darkness still tells our brains it’s time to sleep.

How to Get More for Your Money with a Wakeup Light

Ready to go out and buy a new wake-up light? A Philips brand wakeup light will run you anywhere from $45 to well over $100, depending on which model you choose. The investment might be worthwhile for some people, but it’s a pretty steep price to pay for an alarm clock.

Another way to achieve the wakeup light experience but get more for your money is to buy a Phillips smart bulb starter kit. For around the same price as one of the brand’s fancier wakeup lights, you get so much more. While the plain white bulb kit is a great value, for a little bit more you can get the color-changing bulbs that offer a much wider range of color reproduction.

Not only are Philips Hue bulbs a phenomenal smart lighting value, but they also work really well as a sunrise alarm clock.

You can then connect your smart bulbs to your phone and set them to light up in the same way as a wakeup light—while also getting all the other benefits of smart bulbs for your home. If you’re going to spend that kind of money anyway, opting for the smart bulbs gives you something more versatile than just an alarm clock. Additionally, setting multiple bulbs around your bedroom ensures no matter which way you toss and turn, there’s bright, simulated light headed your way to wake you up.

Of course, smart-home tech isn’t for everyone, so if you really just want the light-up alarm clock, go for it. Either way, waking up to light might give you far better results than waking up to sound alone. As technology progresses, it turns out we can’t fight our evolutionary habits that well after all—so we might as well use wakeup methods that mimic the ones we evolved with. 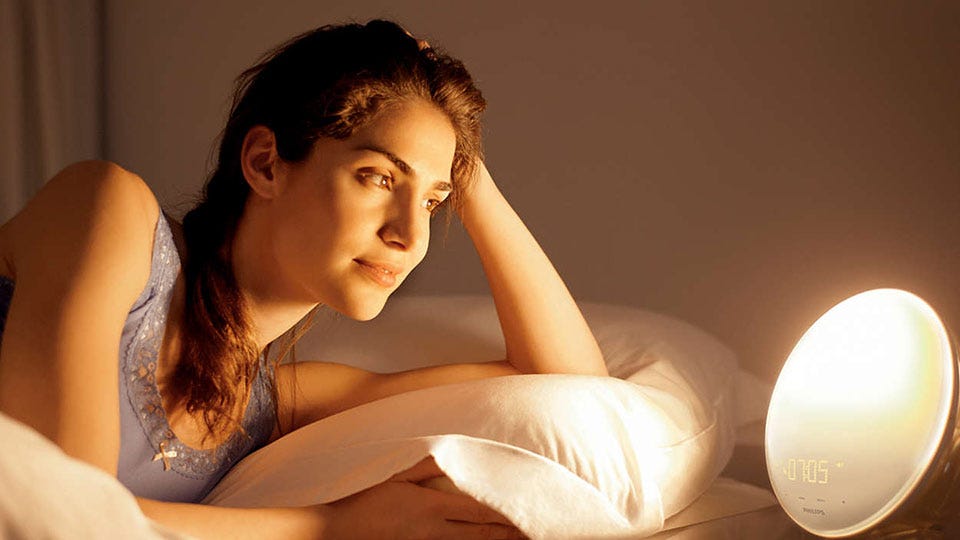