When it comes to viral outbreak movies, you’re bound to find a bunch of zombies—and we’ve got ’em on our list. But if you’re craving a too-close-for-comfort brush with plausible pandemics scare, we have a pile of those too.

If (like me) you find the likelihood of a viral pandemic more terrifying than the thought of a zombie uprising, there are some really great films below. If you’re a zombie lover, hey, I’m happy to help you scratch that itch even if we don’t see eye to eye.

Some people (myself included) really love a good scare and even find it comforting to see a feels-all-too-real story unfolding onscreen. If that’s not you, that’s okay. If these kinds of thrills are the last thing you need, queue up The Good Place or your favorite comedy and unwind that way.

Chris Pine, Piper Perabo, and Emily VanCamp lead the cast in this pandemic-plagued film. Brian (Pine) comes up with the rules that if you’re infected, you’re already dead. When his girlfriend, Bobby (Perabo), gets the virus, he ditches her. Of course, he gets the virus, too, and is upset when his brother, Danny (Lou Taylor Pucci), tries to leave him behind.

I won’t spoil the ending for you. However, the cryptic note in this film is some people believe the virus came from China. Sound familiar?

In this fast-paced plague of paranoia, Gwyneth Paltrow goes to Hong Kong on a business trip and comes home with more than just jet lag. Two days after she returns to Minnesota, she dies—but not before spreading the virus she picked up.

The level of paranoia in this film is definitely beyond anything we’re currently experiencing. This is primarily because they can’t figure out exactly what Gwyneth’s character had, and it just continues to spread. Regardless, this entry might be the one that’s too-close-to-home. No one will fault you for picking a less eerily prescient film.

If you want to know why Contagion is being called the most relevant coronavirus film, but you’re not sure you want to sit through it right now, this Rolling Stone article explains it really well.

If an old woman named Mother Abigail has reached out to you in your dreams, you’re probably in Stephen King’s The Stand. This miniseries is comprised of four episodes (it’s 366 minutes total).

The star-studded cast includes Gary Sinise, Molly Ringwald, Matt Frewer, Miguel Ferrer, Rob Lowe, Ruby Dee, and Laura San Giacomo. The Stand offers a look at the battle between good and evil when most of the population is wiped out by a plague.

As soon as I heard the coronavirus had made it to the U.S., I jumped right on my favorite streaming channels and started looking for movies about viral outbreaks.

One of the first I dug into was Outbreak—a classic, based on the book by Robin Cook. In this film starring Dustin Hoffman and Rene Russo, a cute little monkey that comes to the U.S. from Africa is carrying a virus. It quickly spreads with catastrophic results.

There are a few Cabin Fever movies, including a recent remake. In the original film, a group of recent college grads rent a cabin in the woods. While at their remote vacation spot, a very ill hermit shows up and vomits blood all over the place, both foreshadowing and setting off the chain of events that drives the film.

Not only is this a virus movie, but it also makes you wonder if camping is really all that fun. If you need more reasons to stay home, it might help to know this film was inspired by the director’s experience of developing an unsettling skin infection while traveling abroad.

Stephen King is the master of macabre, so it makes sense we would include more than one movie based on his work in this list. Dreamcatcher is based on the novel of the same name. It stars Timothy Olyphant, Thomas Jane, Jason Lee, and Damian Lewis as a group of friends who get together for a winter hunting trip.

One of the guys finds a stranger in the woods and brings him back to their cabin, but the guy is sick with something very sinister. The arrival of the stranger coincides with bizarre animal behavior, and, suddenly, the group finds themselves under military quarantine. The rest of the story unfolds King-style from there, with all the twists and turns you’d expect.

I think you’d be just as dazed and confused as Cillian Murphy if you woke up in a hospital and there was no one around. And then you leave, and there’s a bunch of fast-moving zombies everywhere trying to kill you.

As the title alludes to (and you discover over the course of the film) 28 Days Later tells the story of the “rage virus” a month into the collapse of society. The sequel, 28 Weeks Later, continues the story with the virus still going strong. This doubleheader definitely won’t lift your spirits during the current pandemic, but it’s quite a ride.

If you’re looking for a classic film about viral outbreaks, 1971’s The Andromeda Strain will give you a bit of a fright. Based on the best-selling Michael Crichton novel, it’s a wonderful mix of extraterrestrial organisms, a viral strain, and panic.

A research satellite crashes in New Mexico. The occupants of the nearby town drop dead almost immediately. The story is told in flashback through the testimony of Dr. Jeremy Stone (Arthur Hill) to Congress; he explains what happened during the containment response.

Although I Am Legend came out in 2007 and bears the same name as the 1954 book by Richard Matheson upon which it is based, it’s not the only treatment of the film.

The basic premise of the book and all the films is a pandemic virus wipes out humanity, leaving a lone man to grapple with the experience and emptiness of it all.

This film version starring Will Smith is pretty good. However, critics (and fans of the book) were quite upset that the end of the film was different from the book. (The alternate ending on the DVD is a more faithful adaptation.)

If you want to turn this exercise in pandemic film-watching into a sort of cinematic history lesson, you can check out all the films based on this tale, including 1964’s Last Man on Earth, starring Vincent Price, and 1971’s The Omega Man, with Charlton Heston. 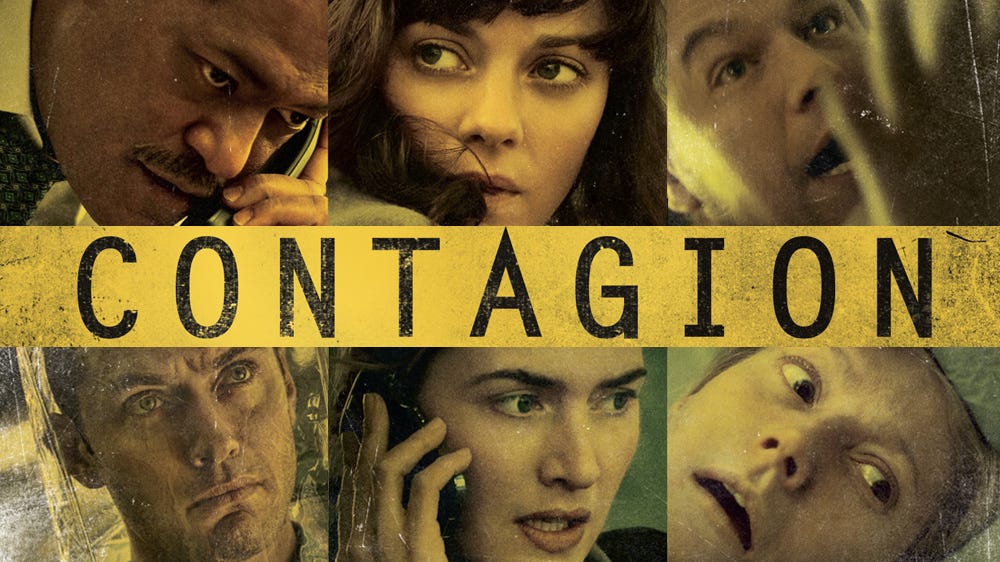