There’s promising news that an antimalarial drug might help in the fight against the coronavirus. Tonic water does contain an antimalarial compound, but slugging back a gallon of it won’t cure COVID-19. We’ll explain why.

Antimalarial Drugs and the Coronavirus

Antimalarial drugs are suddenly a hot topic because they could be used as a therapy to treat coronavirus infections.

The FDA is currently investigating if chloroquine, a synthetic antimalarial drug discovered in the 1930s, is safe and effective to use as a treatment.

The drug is currently used to treat malaria (a disease caused by mosquito-borne single-celled parasites) and amoebiasis (infections caused by a form of amoebas). Because it’s a mild immunosuppressant, chloroquine also helps some patients with autoimmune disorders, like rheumatoid arthritis and lupus.

While the efficacy of this treatment still requires extensive testing, drug megacorp Bayer is donating millions of tablets of chloroquine and their support to the effort.

What Does Tonic Water Have to Do with It?

So, where exactly does the tonic water come in?

If history is any indication of how fast misinformation spreads, your Facebook feed is about to get clogged with people claiming tonic water will protect you from the coronavirus.

Why would anyone peddle such claims? And why tonic water instead of, say, seltzer or sparkling water? It’s because tonic water contains quinine, which is an antimalarial agent.

Historically, tonic water was considered a health tonic. During the 19th century, British officials in India and other tropical regions took quinine powder to protect themselves from malaria. It was effective against malaria, but tasted so bitter, they, naturally, did what they could to make it taste less vile.

This involved mixing the powder with soda water and sugar to mask the flavor. The result was a carbonated drink that was sweet enough to balance out the bitter, medicinal kick of the quinine.

British soldiers and officers, at the time, were also given a gin ration. In perfectly sensible British fashion, they added their gin and a twist of lime to the tonic water. And, thus, the classic gin and tonic was born.

If the U.S. government is investigating antimalarial drugs and tonic water has one in it, it makes perfect sense that slugging back tonic water would have a protective effect, right? Not so fast.

First, the specific research related to the matter is focused on chloroquine, not quinine. The evidence of the efficacy of chloroquine as a coronavirus suppression tool is still under examination. So, it’s foolish to make the leap from one antimalarial that might work to suggesting another drug altogether would work just as well (or at all).

Second, even if quinine proves to be effective (which, to the best of our knowledge, isn’t even being considered right now) you certainly wouldn’t get a therapeutic dose from tonic water. In addition to being the flavoring agent in tonic water, quinine is an actual medication. As such, the FDA restricts the amount of quinine manufacturers can put in their products. Per FDA regulations, tonic water can only contain up to 83 mg of quinine per one liter of fluid.

The therapeutic dose to treat malaria is, of course, much higher than that. For an adult patient, the typical regime is two 648 mg capsules of quinine sulfate every eight hours for seven days. So, the daily intake would be 3,888 mg.

Quinine sulfate is more potent than just quinine, however. Each 100 mg of the compound is equal to 121 mg of actual quinine. So, that daily dosage of actual medication would be (roughly) 4,705 mg of quinine if dosed with the original compound.

This means if you were trying to treat yourself for malaria with off-the-shelf tonic water, you would need to drink 56.7 liters a day. That’s just a swig or two shy of 15 gallons of tonic water. To hit that mark, you’d have to drink a two-liter bottle and change every hour of the day.

That’s not at all feasible; you’d die of water intoxication. While the phenomenon is well-documented, a particularly tragic high-profile case demonstrates how infeasible it is to drink 15 gallons of anything. In 2007, a woman died during a radio contest after drinking almost two gallons of water in three hours.

There is no evidence that quinine can prevent or treat the coronavirus. Even if you tried to treat malaria with it (the disease it was originally used for), you’d do yourself in.

No matter what that Facebook meme or shared tweet says, tonic water isn’t going to do anything except calm your nerves a bit—but only if you mix it with gin.

And to that end, why not? Let’s declare gin and tonic the official cocktail of the pandemic. It’s not going to cure us, but it’ll sure take the edge off. 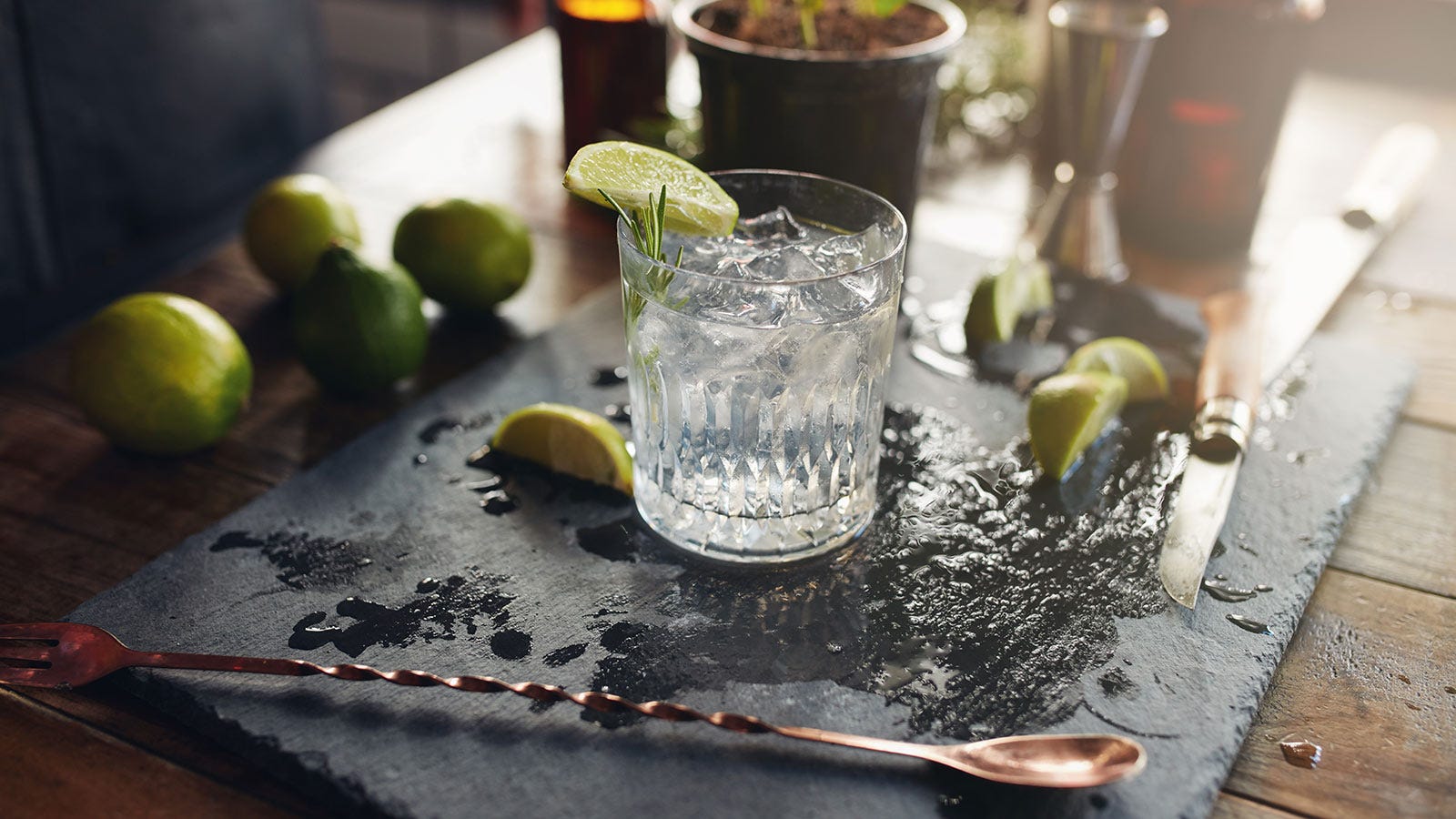