In times of crisis, media can help you cope. Some people seek comfort by watching their favorite movies or shows, or reading uplifting books that keep those glasses rose-tinted. Others, however, prefer stories that make their current problems seem minor by comparison.

We understand the desire for positivity right now. But you can’t deny the satisfaction you can derive from a story that makes you think, “Hey, at least things aren’t that bad.” Plus, all the scrappy protagonists trying to make it in a faltering world might inspire you!

If you’re looking for something to read, why not escape into a dystopian book? We’ve included a few of our favorites below. Check one out—it’ll take your mind off the news for a bit and maybe even make your day look much better.

You might not have heard of William Gibson, but you’ve almost certainly used his terminology. The science fiction author coined the term “cyberspace” in his early cyberpunk writings, of which Neuromancer is one of the best.

The novel’s dystopian aesthetics are evident from the first sentence:

“The sky above the port was the color of television, tuned to a dead channel.”

From there, Gibson drops you into a vast, visionary future, in which plastic surgery turns humans into weapons, and artificial intelligence vies for power with ancient, wealthy families.

The protagonist is caught in the middle of the struggle—but will he make it out unscathed?

Most dystopian lit takes place in a future world that’s easy to imagine from a present-day perspective, so you can trace how the fictional society broke down. However, N. K. Jemisin’s “science fantasy” novel, The Fifth Season, does no such thing. Instead, Jemisin creates a wildly alternate reality that serves as a dystopian mirror of our own society.

In a world plagued by new forms of prejudice and horrifying earthquakes, three female protagonists must figure out how to survive and protect their loved ones. The world-building is so complete and unique, you’ll quickly be immersed.

Also, the protagonists are so strong, you’ll have a hard time believing they can’t beat the odds. The payoff at the end when Jemisin pulls their separate storylines together is well worth the read.

The Fifth Season (The Broken Earth, 1)

“Do Androids Dream of Electric Sheep?”

This Philip K. Dick novel inspired the film Blade Runner. If you’ve seen it, you’ll be glad to know the novel offers the same post-apocalyptic vibe, but with even more complexity.

Do Androids Dream of Electric Sheep? is more of a novella, which makes it ideal if you don’t have a lot of time to read. However, even though it’s short, it still packs in some incredibly dense philosophical questions.

The enigma of what it is that makes us human forms the crux of the story. The protagonist is a bounty hunter who “retires” escaped androids. But the technology in this fictional world makes it virtually impossible to tell androids and humans apart.

The ethics of the bounty hunter’s job are murky, at best, and force you to reflect on the ever-shrinking line between human and machine.

Today’s pandemic concerns are very real. But Colson Whitehead’s bestselling novel, Zone One, will have you thankful for one thing: at least it’s not a zombie virus.

In this pandemic novel, Whitehead’s writing skill manages to move zombie fiction into the realm of literature with a capital “L.” Sure, the book has gore and thrills, but it also has dense, creative prose and plenty of pauses for introspection.

The aggressively average protagonist is an unlikely survivor. However, because you get such a deep look into his inner world, you can’t help but be on his side.

If you prefer your dystopia with a side of surreal horror, Yōko Ogawa’s collection of linked short stories might be just what you need.

Revenge isn’t dystopian in the conventional sense. In Ogawa’s world, nothing is really all that different—except for the subtle yet horrifying things that keep happening.

The stories get stranger and creepier as the book goes on, while Ogawa deftly links them together in surprising ways. Fans of magical realism will love this read. By the end of it all, you’ll have no doubt these tales exist in a terrifying world that’s not quite our own.

“A Fire Upon the Deep”

In this pivotal novel, Vernor Vinge’s vision of the future is so revolutionary, it’ll change the way you think about time and space. At the same time, it’s so obvious, you’ll wonder why you didn’t think of it first. Here, even the laws of physics are different, but in a way that makes perfect sense.

At first, A Fire Upon the Deep seems to take place in a world that’s more utopian than dystopian. Soon, though, a strange, god-like entity threatens chaos upon the universe.

This sexy, innovative read takes you across galaxies, but hinges on the tiny, vital relationships between individuals who are thrown together during a difficult time.

A Fire Upon The Deep (Zones of Thought, 1)

If you recall Ender’s Game from your high school reading list, don’t balk—it’s well worth revisiting as an adult. Orson Scott Card’s protagonist might be a child, but he grapples with some very adult problems when he finds himself in military training to defeat a seemingly-hostile alien species. In the end, the book serves as a critique of the same military structure that forces the protagonist to succeed.

Of course, if you have kids in middle or high school, this is especially appropriate for them. If you want your kids to read more during the quarantine, this one might be a good place to start.

Russell Hoban’s fantastically strange, creepy novel takes some getting used to when you first pick it up. Riddley Walker is written entirely in its own dialect, with simplified phonetic spellings of English words. This unconventional choice might seem challenging at first, but it only heightens the weird atmosphere Hoban creates.

The story takes place many, many years after a devastating nuclear war, and society hasn’t exactly made a perky comeback. Rather, people have returned to a more prehistoric Iron Age, peppered with bizarre folklore in the form of puppet shows.

In the folklore, you’ll recognize twisted hints of the past, but not much hope for the future. The tale forces readers to consider what would happen if society was completely destroyed, but humanity lived on.

Of course, we can’t promise you’ll feel more comfortable after reading these books. But instead of being unsettled by the coronavirus, you’ll be immersed in alternate worlds of societal breakdown, technological hubris, and the terrors that ensue. With books like these, being quarantined on your couch will suddenly feel a little more manageable. 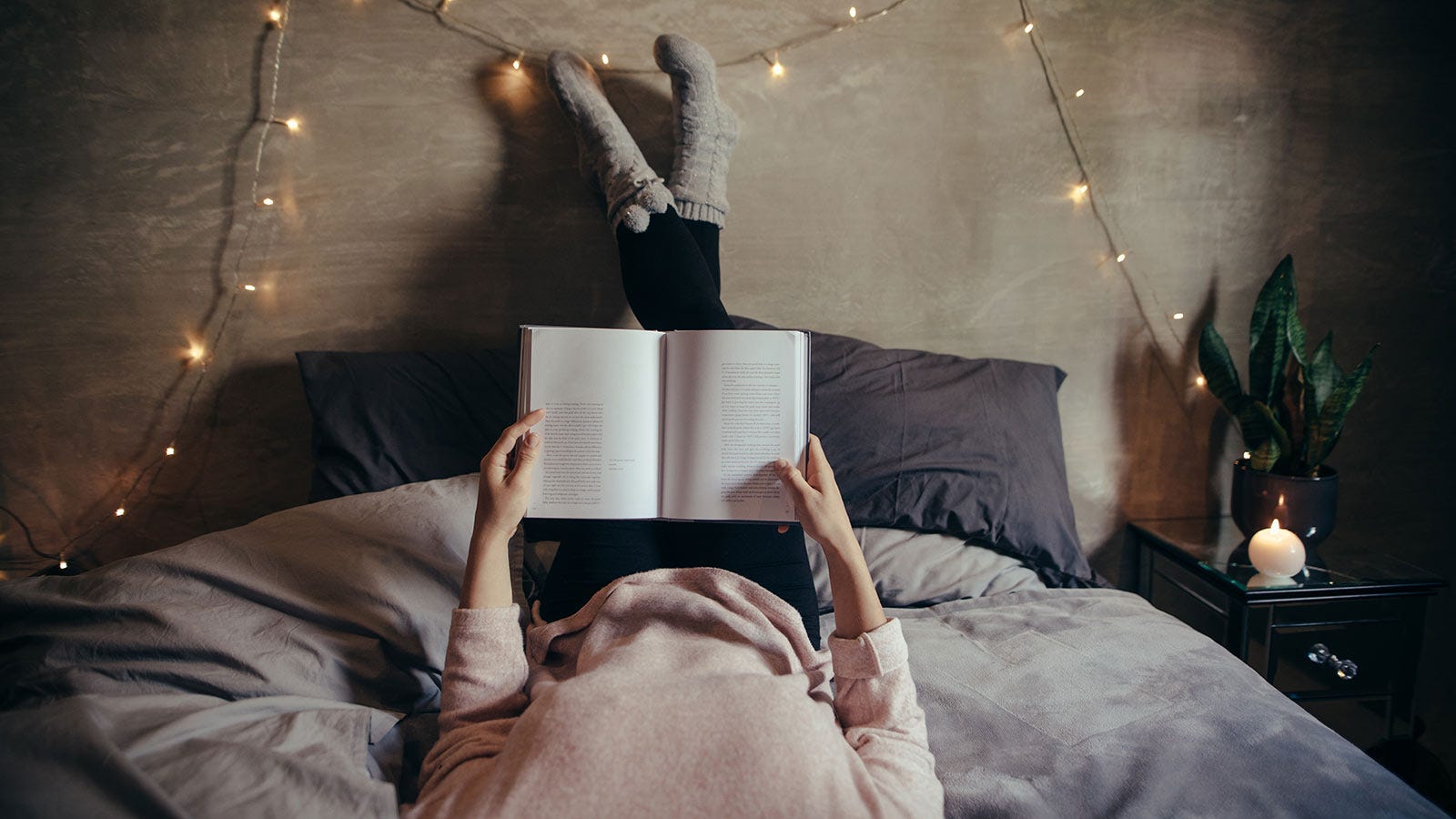