You’re stuck in quarantine. The Getty Museum is closed until further notice because of the coronavirus. The folks at Getty miss showing you art. You miss art. Here’s their plan to bring you and art back together.

The Getty team is encouraging you to browse their vast collection online, and then (per the recent tweet below) recreate what you see.

We challenge you to recreate a work of art with objects (and people) in your home.

Responses are pouring in, and we’re blown away with how creative people have been in their attempts. Here are some of our favorites with a little bit of art trivia thrown in along the way.

The composition and lighting on the above effort are incredibly good. Johannes Vermeer wasn’t a prolific painter. However, his 17th-century works are renowned due to his use of expensive pigments and masterful treatment of light.

He focused primarily on domestic, middle-class scenes, and (quite relevant to our current situation) he painted almost all of them in two rooms of his home. We have to imagine he’d be quite proud of this recreation.

🖼️”Franco-American Gothic” painted by Grant “Not-yet-out-of-the” Wood and recreated by a socially distanced family. @GettyMuseum – thanks so much for the idea! 🤣 pic.twitter.com/qb1QoBTbbp

American Gothic! With a real pitchfork! I guarantee whoever bought that pitchfork never thought it would end up internet famous.

Or, perhaps, they did. Given the fame of this painting, we’re pretty confident most pitchforks must be wielded at least once in mimicry of this iconic 1930 piece by Grant Wood.

Thanks fir the inspiration pic.twitter.com/GO54wZ7Wwf

Not only is this little girl adorable, but the recreation of a school hallway—bench, and all—is spot on. Again, we have to imagine Rockwell would be proud of the effort to capture the fundamental wholesomeness of daily American life he sought to immortalize.

You want a perfectly appropriate art mix-up for our times? There you have it—gloves, gas mask, and all. A fun fact about this painting is it wasn’t a commission, like most portraits. Rather, the artist requested the opportunity to paint beautiful Parisian socialite Virginie Amélie Avegno Gautreau. Sounds like intrigue already, right?

When presented at a formal art exhibit in 1884, the work was considered scandalous, and it temporarily set back the career of John Singer Sargent. No press is bad press, however! It’s been argued the scandal helped launch his career in Great Britain and America.

My donation to @GettyMuseum – Leonardo da Vinci’s “Woman with an Ermine”. Thanks to Duffy the ferret for sitting so still for a change for the Getty Museum Art Challenge! @GettyMuseum #TheLockdown #gettymuseum #gettymuseumchallenge #Covid_19 #QuarantineLife #ferret #ferrets pic.twitter.com/LTq2tbtEbV

Is having a ferret and ample beaded necklaces around the Getty-challenge version of doping? We’ll leave that up to you.

Either way, this recreation of The Lady with Ermine is spot on. Want some more art trivia? Leonardo da Vinci only painted four portraits featuring women: this one, the Mona Lisa, the portrait of Ginevra de’ Benci, and La belle ferronnière.

This recreation of the Portrait of Innocent X by Diego Velázquez is one of the finest mockups we’ve seen. Who has the stuff to recreate papal vestments just lying around, along with a matching chair? Is this guy a professional papal cosplayer? Does he have a period-appropriate, Pope Leo XIII costume waiting in the wings? We have so many questions.

The 17th-century work is widely regarded as one of the finest portraits ever painted. We’ll leave you with this tidbit about it. It’s regarded as such a fine portrait due to its degree of realism. Allegedly, when the Pope first saw it, he yelled, “It’s too true! It’s too true!”

Given he’d seen other examples of Velázquez’s work before, though, this tale is likely apocryphal. The fact that this masterpiece was more or less “lost” to the public for so long might be a contributing factor to the popularity of this tale. Although it was safely secured in a private gallery in Rome, it was largely forgotten by the public for centuries.

Proof you don’t need spare yards of silk cloth and a golden chair to pull off this stunt! This clever couple mashed their faces into a bit of real-life Cubism. The painting depicts a single face, but the defining element of Cubism is the simultaneous portrayal of things from multiple viewpoints. So, recreating this required more than one face—yay for cohabitating during quarantine!

The piece being copied here is Face of Woman by the pioneer of Cubism, Pablo Picasso. By 1962, when this painting was completed, Picasso was quite advanced in years (he was born in 1881, after all). Still, he was a prolific painter and worked until his death at the age of 91. He actually created more art during his last four years alive than he ever had before.

Enough art history for the day! There are so many other fantastic recreations thanks to the Getty project. You really should check them all out. 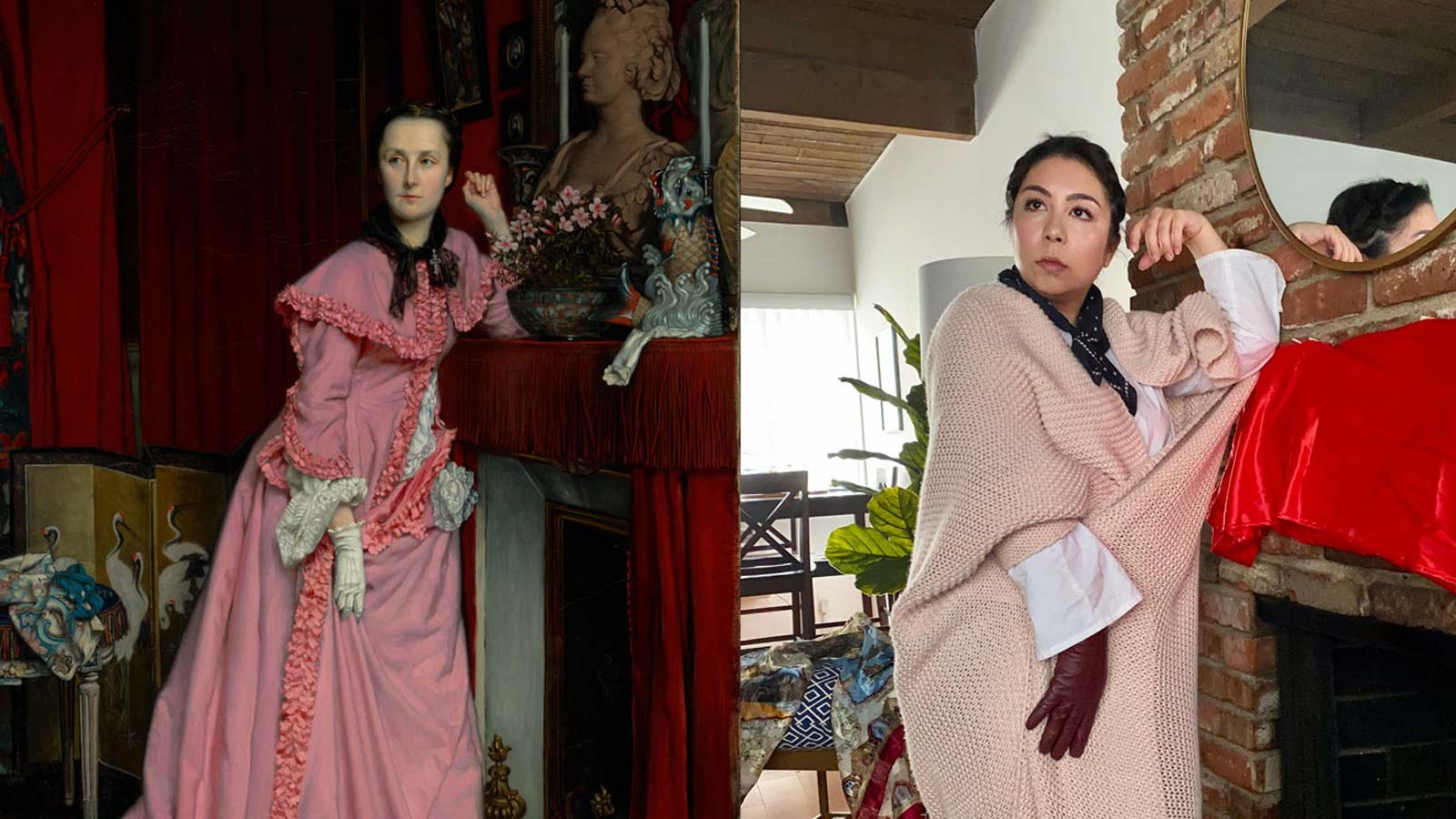