For adults, naps are a luxury. For babies and little kids, though, they’re essential! Naptime ensures little ones get the proper amount of sleep. It aids in their mental and physical development, and also prevents exhaustion-driven meltdowns.

Naps are also important for parents. For many, a quiet break in the middle of the day is the only way they can maintain an ounce of sanity. We all love our kids, but everyone needs at least a little break each day. This has never been more true than during this time of isolation. The struggle is real!

The problem is some babies and kids have a tough time with naps, even though they need them. Perhaps you’ve tried everything, including sleep training, crib hour, blackout curtains, sound machines, and so on.

If so, you’re certainly not alone! Here are a few more tips you can try to get your child to take longer naps.

What Length Is Age-Appropriate

Nailing an ideal sleep routine for your child requires some research. If you don’t care about a routine, you can follow her cues and figure things out from there. Some people do this and it works fine. However, you might find a structured sleep schedule based on your child’s age works best.

First, you have to figure out how much time she should spend sleeping per day. For example, a 9-month-old baby should take two naps per day, and each should last between one and a half to two hours. She should be awake between two and a half to three and a half hours. Pediatrician and sleep expert, Dr. Harvey Karp, has a helpful breakdown of this at Happiest Baby. However, you can also figure it out using your parental intuition.

This will obviously vary for everyone, but the suggested wake and nap times should be mostly accurate. If your child is 11 months old, and you put him down for three naps a day, he probably isn’t tired enough for that many. Therefore, he also won’t sleep as long. If you try two naps with longer wake times, he will likely nap better.

Similarly, if your child is 4 months old, and you’ve got her on a two-naps-per-day schedule, she probably needs four. As a result, she might be overtired and not sleeping well. This is why doing the research and figuring out how much sleep your child actually needs is such a helpful first step.

This part is critical: you have to pay attention to your child’s “sleepy” cues. You can start by following the wake times on websites like Happiest Baby, Taking Cara Babies, or Owlet Dream Lab. However, you might find your child gets sleepy before the end of the suggested wake period.

At that point, you can use the wake times as a guide rather than the rule, and follow her sleepy cues, instead. If she’s supposed to be awake for three hours, but you notice she’s sleepy around the two-and-half-hour mark, go ahead and let her nap. This can make a huge difference in the amount of time she actually stays asleep.

Here are some sleepy cues you can watch for in babies and toddlers:

When you notice these things, your little one is ready to go sleep. If you keep pushing it, thinking the longer he stays up, the more tired he’ll be and the longer he’ll nap, it will backfire.

When a child is overtired, it might be obvious at first, but then he’ll get a burst of energy. Next, he’ll get extremely cranky. When you try to put him down for a nap, though, he’ll get hysterical and inconsolable.

If your child cries a lot before every single nap, it could be because he’s either too tired or not tired enough. This is why watching for sleepy cues is so important. It might take some time, but you’ll probably notice a big difference once you do.

Babies are a bit like pets in that they love a routine. Routines make them feel safe and secure. They also give you more structure in your life, which is nice! Getting on a nap routine might help your child sleep better and will probably help you organize your life, too.

The key to making this work is consistency. I schedule my day around her naps. If you mess up the routine occasionally, it’s not a big deal. However, if nap times change every single day, it’s going to confuse your child.

One thing that might help your child sleep longer is keeping him engaged until he starts exhibiting sleepy cues. Instead of letting him lounge on the couch and watch movies, encourage him to play and move around to get out some energy.

Listen, there’s absolutely nothing wrong with letting your kid veg out in front of the television for a bit. However, he’s more likely to sleep more if he’s tired from running around and playing. You might want to have a designated TV time for your kids that works around their nap schedules.

Feed Her Right Before Naptime

If your kid is going down for a nap hungry, she’s more likely to wake up earlier. Try to arrange your schedule so that feeding and nap times make sense. For example, I give my child a meal about 30 minutes to an hour before her two naps.

Try giving your child a bottle, meal, or snack about half an hour before naptime and see if it changes anything. If you want your baby to sleep longer, this might mean adjusting how many times she eats per day.

Again, babies love routines, and not just when it comes to bedtime. Try to maintain a routine before naps, too. After your child adjusts to the routine, whenever you start it, he’ll know it’s time to get ready for naptime.

Your nap routine can be whatever works for you and your child, but the key is to relax him. For example, when it’s time for my daughter’s nap, we go into her room and shut the door. I turn on a dim light and read her a book.

Then, I turn off the light, turn on the sound machine and sing while I rock her. I put her in her crib while she’s still awake, and then quietly walk out of the room.

Pick a routine that works for you, but do it before every single nap, every day.

Let Him Fall Asleep on His Own

If your child isn’t napping well and you feel desperate, it’s normal to do anything you can to get him to sleep. For many parents, this might mean rocking or nursing him to sleep, or lying down with him until he falls asleep.

Almost every parent has been here. When they’re around 4 months old, babies experience growth spurts and learn how to sleep like adults. After this, they start to wake up more, just like adults do. When adults wake up, most of us go right back to sleep without even realizing we woke up. This is because we know how to go back to sleep, but babies haven’t learned that part yet.

If he falls asleep in his crib, though, he’ll be comforted when he wakes up later in the same spot. Now, here’s the bad part: getting a baby to fall asleep on his own often requires sleep training. And sleep training often involves a whole lot of crying.

We’ve covered sleep training in other articles, but it’s so worth effort! Many parents (myself included) have noticed their child’s naps improved tremendously after they start it.

Babies, toddlers, and little kids sleep best in a cool, dark, and quiet room. Darkness helps their bodies produce melatonin, the sleep hormone. Light actually inhibits melatonin production and will keep your child awake. You might also want to consider buying some blackout curtains—they make a huge difference, especially during the day. A night-light isn’t necessary yet because babies aren’t afraid of the dark.

Most of the research indicates that, like adults, babies sleep best in a cooler environment. Your best bet is keeping their room temperature between 65- and 70-degrees Fahrenheit.

Lastly, most babies tend to like it quiet when they sleep, but sound or white-noise machines can help. Some children find them soothing, and they’ll also know it means bedtime. These can also prevent outside noise from waking your child after she falls asleep.

Getting a child used to a new nap routine and schedule can take a lot of time. It can definitely get discouraging or frustrating. There will be times you just want to give up and go back to the old sleep crutches or give up on naps altogether. Try not to! Consistency is key with baby and toddler sleep schedules. Keep trying, and if one thing doesn’t seem to work, tweak it.

There will be setbacks, especially in the first year or two; it took me over a month to get my daughter to nap longer. Then, just a few weeks later, everything reversed, and it was awful again for a while. However, things got better.

Just stick to the routine and schedule the best you can. Offer your child some extra comfort whenever he really needs it. Just use your parental intuition, and one day, that routine will stick for good!

READ NEXT
Jessica Booth Jessica Booth is a freelance writer for LifeSavvy. She has been working in the editorial world as a freelance writer for over two years and previously worked as an editor for over eight years.  Jessica writes about travel, beauty, wellness, health, food, home decor, and parenting, and has reviewed and tested out products for all of those verticals over the course of her career. Read Full Bio » 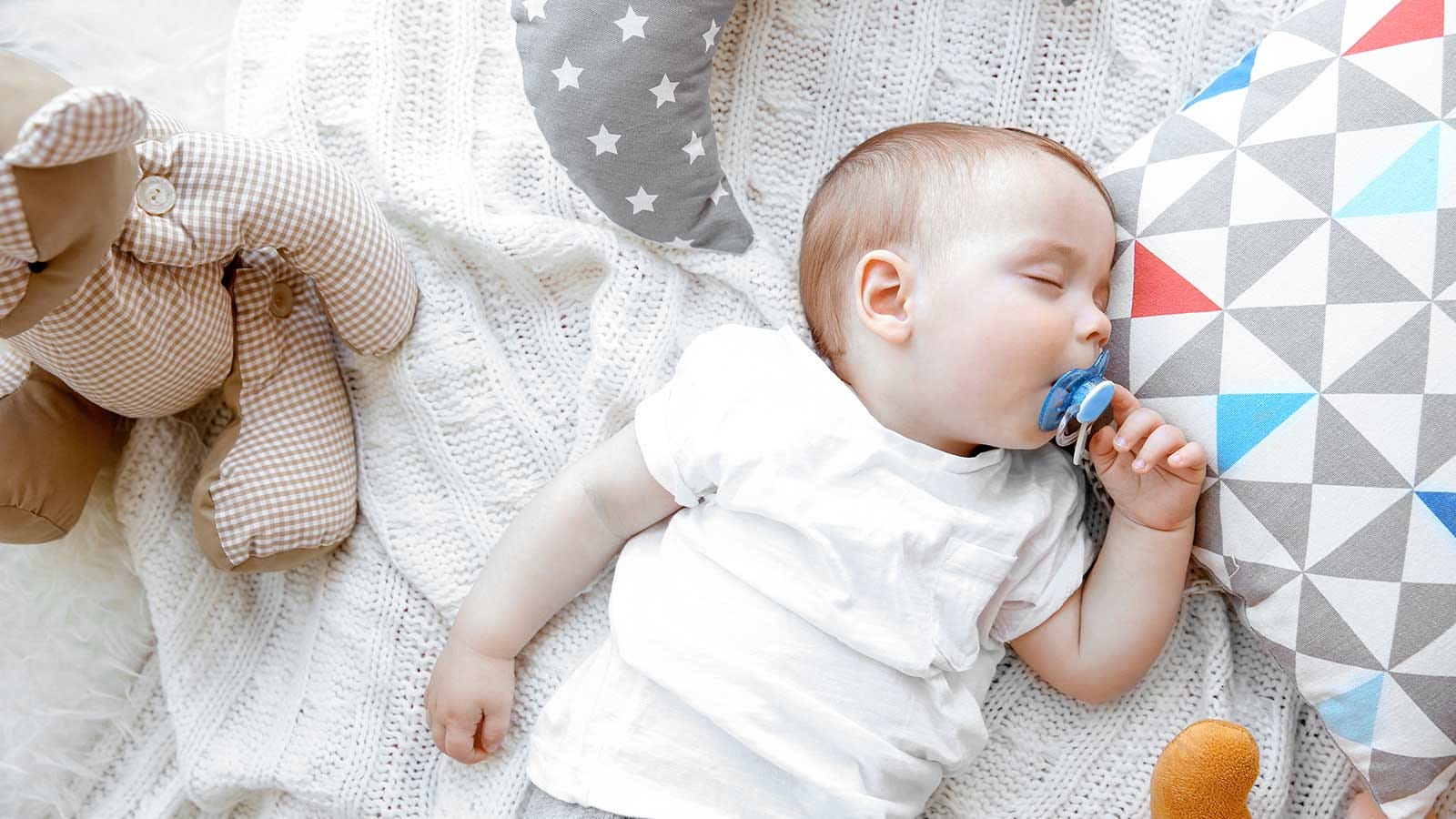