A global pandemic means recreational travel isn’t just out of the question for now, but likely will be for some time. It’s safe to say most of us are going to be dealing with some serious wanderlust. Here’s how to scratch that itch with scenic movies.

If you really miss traveling, you can do a little visual traveling of sorts by watching movies that feature truly gorgeous scenes of countries and cities around the world. Sure, they might make you a little sad (you’ll be adding the highlighted spots to your vacation bucket list), but they’ll give you something to look at that isn’t your front yard. And, hey, they might even be a bit uplifting.

Here are a few beautifully shot movies to watch if you really miss traveling.

Into the Wild is an adaptation of the book by the same name written by Jon Krakauer. It stars Emile Hirsch as Christopher McCandless, who graduated from Emory University as a top student and athlete. He left everything he owned behind, donated his $24,000 savings account to charity, and hitchhiked to Alaska to live in the wilderness.

The movie follows McCandless as he treks across the U.S., with the entire country as a stunning backdrop. You’ll follow him on hiking adventures, as he encounters wildlife, and checks out mountains, lakes, and gorgeous views. He has a ton of interesting experiences. The setting is so beautiful and vivid, you can almost pretend you’re actually with him.

Under the Tuscan Sun

Under the Tuscan Sun is a silly romantic comedy, but a pretty good one! Watching it also allows you to pretend you’re traveling through Italy, even if you’re just sitting on your couch. Diane Lane plays Frances Mayes, whose life is basically destroyed when she realizes her husband is cheating on her.

In an effort to feel better, Mayes takes a vacation to Italy, and ends up making the impulsive decision to buy a home in Tuscany. The film is full of gorgeous shots of the hills in Northern Italy, as well as the Amalfi Coast, and everything in between.

Of course, she also meets someone, and they have an adorable love story, but that’s beside the point. It’s an excellent watch if you’re missing or dreaming of Italy.

Wild is an adaptation of the biographical book of the same name by Cheryl Strayed (played by Reese Witherspoon). After experiencing some really tough losses and seriously self-destructive behavior, Strayed decides to get herself back together by hiking the Pacific Crest Trail. It’s one of the longest and toughest trails in the U.S.

Strayed has no hiking or outdoor experience, so her idea isn’t exactly great, but it definitely makes for an interesting story. As you follow Strayed through the gorgeous Trail, it’s so beautiful, you’ll find yourself itching for a hike as soon as possible.

Forget the entire plot of Midnight in Paris (although it’s a pretty adorable rom-com). Just watching it on mute will make you want to pack your bags and fly to Paris. It’s charming, sweet, and shows off the absolute best parts of the city. From the gorgeous architecture, and small shops and cafes, to the stunning tourist spots, like Monet’s Home and Gardens.

The film is about Gil Pender (Owen Wilson), a screenwriter and aspiring novelist vacationing in Paris with his fiancée (Rachel McAdams). As he tours the city, he goes back in time to the Jazz Age and spends time with cultural icons of the past, during the city’s golden age of art. It’s a little silly, but it’s also a really beautifully shot film.

You can head to Thailand while watching The Beach. The movie follows Richard (Leonardo DiCaprio), an American backpacker who heads to Thailand to find some real adventure and add some meaning to his life.

He hears about a mythical, isolated beach that’s supposed to be the definition of true paradise. He makes his way there with some new friends. Of course, the beach isn’t exactly what it seems, but I won’t give anything away. While this movie doesn’t have the best reviews, it’s really beautiful to watch, with endless shots of white sand beaches, crystal clear blue water, and swaying palm trees.

The Way is another backpacking movie, but this one has a sad twist. Martin Sheen plays Tom, an American doctor whose adult son dies in a storm in the Pyrenees while walking The Camino de Santiago (The Way of Saint James). Desperate to understand his son more, Tom decides to go on the pilgrimage himself.

You’ll follow Tom and some friends he meets along the way from the French Pyrenees to Santiago de Compostela in the Northwest of Spain. While the premise of the movie is sad, it’s all about adventure and exploration. It also doesn’t hurt that it’s gorgeous to watch. This film is full of scenes that feature the raw beauty of France and Spain in ways you’ve never seen them before.

Take a virtual trip through India while watching The Darjeeling Limited. It stars Owen Wilson, Adrien Brody, and Jason Schwartzman as three estranged brothers who reunite to go on a train trip through the country.

Of course, the main focus of the movie is their relationship and how they come back together. However, it also features many visually pleasing views of India. You’ll go along on the train ride that takes them through the colorful, bustling country to visit their mother in a Himalayan convent.

Encounters at the End of the World

Forget about rolling, grassy hills, busy city streets, or tropical beaches. Encounters at the End of the World will take you on a journey hiking through icy, snowy Antarctica. Filmmaker Werner Herzog travels the isolated landscape and finds a group of people who spend their lives at McMurdo Station, America’s largest Antarctic research center.

The film isn’t about love or family, but it doesn’t need that kind of plot, because it’s still incredibly interesting. We learn more about the scientists, as well as the amazing place in which they live and work. Plus, you get a fascinating view of Antarctica’s natural beauty the entire time.

In Vicky Cristina Barcelona, Vicky (Rebecca Hall) and Cristina (Scarlett Johansson) go to Barcelona for summer vacation. They meet painter, Juan Antonio (Javier Bardem), who invites them to stay for a weekend. They also meet his former lover (Penélope Cruz), and things get . . . interesting.

Watching this movie will literally make you want to buy a plane ticket to Barcelona and spend the next few months traveling through Spain. There are scenes that feature the gorgeous views, architecture, and delicious food of the country.

The quirky comedy Amélie is about a woman named Amélie, of course. She tries to orchestrate the lives of the people around her to make the world her own. It’s funny, sweet, and charming. It’s probably also the reason many people have always been enchanted by Paris.

The film was shot in over 80 different locations throughout the city, revealing its charm and mystery through the eyes of Amélie. It’s a beautiful film all the way through and truly enjoyable to watch.

The Best Exotic Marigold Hotel is another movie to watch if you feel like virtually traveling to India. The film is about a group of British retirees who travel to the country to stay in what they think is a gorgeous, luxurious hotel. It’s not what it seems, but the place becomes something special to them, anyway.

The movie is less about the plot than the beautiful scenes of India it features. It’s also a funny, adorable film to watch if you really need a pick-me-up.

Eat Pray Love is adapted from the memoir of the same name by Elizabeth Gilbert, played by Julia Roberts. After going through a rough divorce, Gilbert decides to leave her life behind and go on a journey of self-discovery through Italy, India, and Bali.

Sure, the whole movie kind of has a “travel influencer” feel to it, but it’s also a really great story. It’s also incredibly visually appealing. There are gorgeous views of the best all three countries have to offer. By the end, you’ll consider leaving your life behind to go find yourself somewhere else.

It might be a while before any of us are actually under the Tuscan sun or traveling the world by train. But with a little movie magic, we can lose ourselves in the scenery of faraway places. 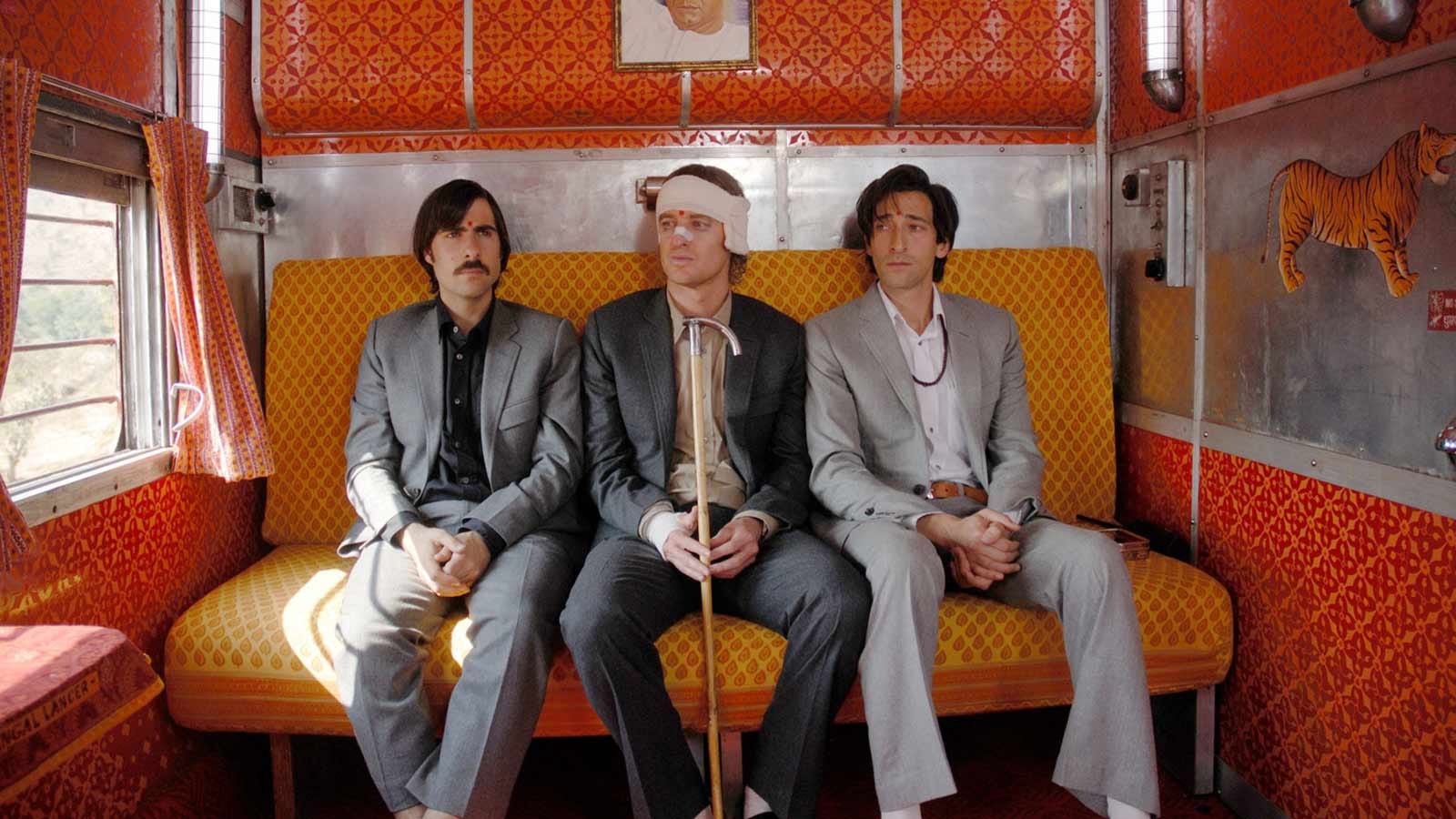