If you feel like your towels don’t absorb water as well as they used to and they’ve developed a bit of a funky smell, there’s a good chance you’re laundering them incorrectly. Here’s what you need to do to bring them back to life.

Don’t worry though, even if you’ve abused your towels for months (okay, okay, years) there’s still a good chance you can bring them back from the dead and get better absorbency and a fresh smell again. First, let’s look at what you shouldn’t do to your poor towels, then we’ll offer some handy tips to keep them nice and fluffy.

These Common Practices Kill Your Towels

Before we tell you what to do, let’s take a look at what you shouldn’t do to your towels. If you’re guilty of some or all of these things, don’t feel bad—every tip and trick in this entire article is a direct result of my battle against towel demons, and you’re in good company.

First, avoid chlorine bleach and use a gentler alternative like Oxyclean. Why? While it seems intuitive to hit your white towels with bleach to get them super clean, it’s very rough on the fibers. Over time the cotton will take a beating and become less absorbent. (I will, however, fully admit that I like my towels to smell like they took a lap around the pool at the YMCA and I will not judge you for putting a small splash of bleach in with your towels.)

Fabric Softener Is Choking Your Towels

How does fabric softener cause the funk? Fabric softeners coat the fibers of the towel with layers of oil and petroleum compounds. Not only does this hinder water absorption (so it feels like your towel is doing a terrible job drying your body) but it also traps water in the fibers (which leads to the funky smells because even after a trip through the dryer the towel isn’t truly dry). That last bit is particularly awful because the towels will quietly mildew and when they get wet after your next shower the awful smell will erupt out of them.

While towels seem durable and it seems intuitive to blast a thick absorbent piece of fabric with maximum heat to dry it thoroughly, it’s very rough on the towel. Not only can it cause fabric warping if your towel has a decorative band or trim (as the decorative parts shrink at a different rate than the body of the towel on account of different fabric weaves and density), but high heat will effectively cook the cotton fibers and destroy the deep fluffiness that likely attracted you to the towels in the first place.

When it comes to treating your towels right, there are a few essential tricks. Beyond the obvious things you can do to avoid damaging your towels—like not leaving them in a big damp ball in the corner of your bathroom and laundering them regularly like anything else—you should do the following things to help them live their best towel life.

Before everything else, check your washer. If your washer has a severe case of the funk-n-gunk, nothing is going to help. Keep the door open on high-efficiency machines so they can air out properly, check around the door seal for gunk, and use the cleaning cycle on your machine once a month (or as needed) to keep the water fresh and the gunk away from your towels. (If you do all that and your washer still smells weird, get the manual out and check the drain trap as it likely needs a good cleaning).

Use Vinegar Instead of Softener

In place of your old laundry softener routine, add in plain old white vinegar. When it comes to laundry, vinegar is a cheap wonder tool. The mild acidity of vinegar strips skin oils (and fabric softeners!) out of your towels and leaves the cotton fibers bare, just the way you want them. If you’ve recently stopped using fabric softeners (or you just bought the towels as they usually come fabric softened to entice customers), run your towels through with a full cup of white vinegar added to the load. After that, a fourth cup should be sufficient.

Launder them alone and don’t overload your washer. Towels are different enough from the other fabrics we wear and use (like bed sheets) that it makes sense to isolate them, both to avoid getting towel lint all over your clothes and to ensure they’re washed correctly. Avoiding mashing every towel in the house into the washer at once ensures both that the towels get cleaned properly and that they don’t end up under-drying in the dryer.

In addition to not packing the washer full of towels, cut back on the amount of detergent you use. I have a high-efficiency washer, and I use 1/3 to 1/2 the recommended amount to avoid getting a load of towels with detergent residue on them (depending on your washer it might even be worth turning on the extra rinse cycle).

As a bonus, you’ll have softer towels. A lot of people complain that their towels feel rough or “crunchy,” so they have to use fabric softener. While it’s true that fabric softener does make fabric feel softer (at the cost of absorbency of course), the crunchy towel effect is almost always a result of using way too much detergent.

Finally, make sure they’re good and dry. While we established in the what-not-to-do section that you don’t want to roast your towels on the hottest dryer setting, but you do want them to be completely dry to the touch before you fold them and put them away. If your towels aren’t coming out dry after running them on a medium heat cycle, you should rewash them with vinegar (if you’re trying to rehab towels you’ve previously used with softener) or reduce the size of the load.

Once you embrace the no-fabric-softener-lifestyle and use these simple tips, you’ll be rewarded with towels that dry you properly without a hint of funky odors. 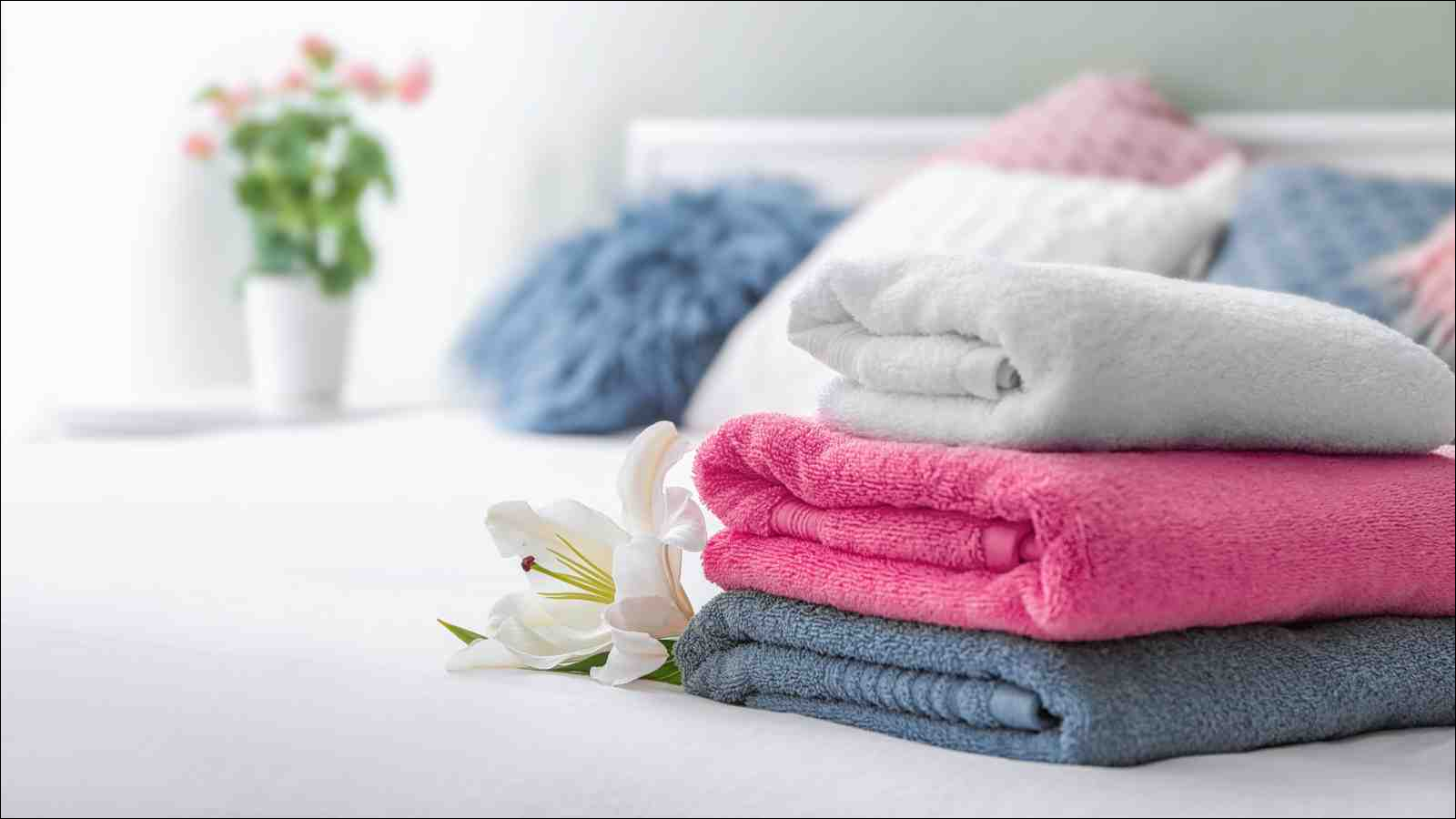