Every country has its own idea of what healthy or “nutritionally complete” means. Plus, because every part of the world is unique, so are its eating habits. If you want to try some exotic dishes that are also good for you, these 10 countries have the healthiest cuisines.

Environment, weather, terrain, and culture are just a few of the factors that affect which foods are popular in different parts of the world. So, let’s travel across the globe and learn about 10 of the healthiest cuisines, along with some traditional recipes you can try at home.

The traditional Japanese diet is rich in fish, seafood, and whole foods, with restrictive amounts of animal meat and minimally processed foods. Their style of eating emphasizes the foods’ natural flavors.

Much of the diet consumed consists of rice, noodles, fish, tofu, fruits, and veggies, often enjoyed raw, sautéed, grilled, or pickled. Many of these traditional meals are rich in nutrients and promote many health benefits.

While traditional Japanese cuisine is very healthy, the modern Japanese diet has many Western influences, and processed foods and animal meat are more common today.

Another dish that’s popular in Japan is Gyoza, or “potstickers.” They’re dumplings filled with ground meat and vegetables. This delicious traditional recipe by Chopstick Chronicles calls for ground pork, cabbage, and spring onion, along with a plethora of incredible herbs and spices.

The recipe is very in-depth, though, so you won’t miss a beat. Give them a shot and try some of the recommended substitutions to tweak them to your preferences.

Israeli cuisine is full of healthy staples, including legumes, olive oil, and eggplant. The spices used help enhance and provide additional flavor to the food. Some staples include hummus, falafel, and tahini, all of which have become wildly popular across the globe.

Tahini is a paste made from toasted and ground sesame seeds, and it enhances a multitude of dishes, especially in Israel. Here’s an authentic Israeli recipe for this nutty, buttery paste.

Greece is well-known for its Mediterranean diet, which has become quite trendy worldwide. It’s really not so much a diet, but rather, a way of cooking and eating.

It involves cooking everything with extra virgin olive oil, eating plenty of fish, seafood and veggies, and whole grains. Typical snacks include nuts and a common dessert is usually fresh fruit.

As if that doesn’t sound delicious enough, this diet also encourages you to drink a glass of wine with dinner each evening if you imbibe.

This recipe for Briam by cookbook author, Elena Paravantes, is the Greek version of ratatouille. It calls for potatoes, zucchini, eggplant, onions, tomatoes, and bell peppers, all of which are, of course, roasted in that extra virgin olive oil we mentioned above.

Traditional Spanish cuisine is all about portion control, which is why it made it onto our list. The typical style of eating in Spain is with tapas dishes, which are small plates with many different foods.

Tapas are served all day in cafes and bars throughout this European country, although each area has its very own interpretation of what to serve.

Spanish cuisine generally includes many high-fiber and low-fat foods, including plenty of beans, seafood, fish, and vegetables. But if you want your tapas to be authentic, you simply must include some tortilla de patatas or a Spanish omelet.

The author of this recipe learned it from her Spanish mother-in-law. It requires only three ingredients: eggs, onions, and potatoes. However, you’ll want to follow the cooking instructions, as it’s really easy to burn your tortillas!

Chad offers a very diverse diet and many cultural traditions because the country is made up of over 140 different ethnic groups. Generally, the cuisine of Chad incorporates fresh foods that are free of preservatives, saturated fats, or salt.

The people of Chad eat a lot of grains, tomatoes, onions, goat meat, and milk. Dates, mangoes, and guava are also eaten regularly as they’re all grown around the country.

Daraba is an okra stew made with eggplant and sweet potatoes. You add peanut butter to thicken the sauce, as well as your herbs and spices of choice, along with Maggi seasoning or bouillon cubes for extra flavor.

Although some might say Costa Rican foods are high in saturated fats, the locals’ portion controls and active lifestyles keep them healthy.

A typical Costa Rican diet includes rice and beans, organ meat, and plenty of chicken, beef, and pork. Fresh vegetables, fruits, and plantains are also popular in this beautiful country.

One of the most popular traditional dishes in the country is Arroz con Pollo. Fortunately, this chicken and rice dish is easy to make, and the author of this recipe recommends serving it with refried beans and potato chips.

Indian cuisine is bursting with plenty of healthy herbs and spices, which do way more than enhance the flavor of the food. Spices like curry, turmeric, ginger, and cardamom, all boast nutritional benefits and keep the natives healthy.

India is predominately a vegetarian nation, with much dependence on beans, grains, legumes, fruits, and vegetables. Modern cuisine, however, is not as healthy as the authentic and traditional foods of the past.

Chaat is a group of traditional savory snacks sold by street vendors in India. They can be made in a number of different ways. The video above shows you how to make four different versions.

The low-fat diet consumed in South Korea is bursting with nutrient-rich foods and very minimal saturated fats. Much of their diet includes noodles, eggs, tofu, fish, and that famous staple, kimchi. This fermented dish consists of veggies and seasonings. Korean Bapsang shared 15 different recipes for the dish on her site, all of which look and sound incredible.

RELATEDWhat Exactly is Kimchi? A Staple in Korean Cuisine and Must-Try

Restaurants often serve several small plates of various dishes, including kimchi, soup, dumplings, meat, egg, and fish, all in one meal. The variety adds interest and nutrients, and is still considered healthy as long as you don’t overindulge.

The Scandinavian diet is generally very healthy, and it shows: Life expectancy in Sweden is 81 years.  Although Swedish folks don’t eat a lot of fruits and veggies, their diet is rich in berries, and fish. They also enjoy a lot of high-quality meats and dairy products.

One staple is whole-grain rye bread, which is high in fiber and helps with digestion. The author of this recipe recommends serving it as an open sandwich loaded with cold smoked salmon, dill, and horseradish.

Vietnamese dishes often feature a wide variety of herbs and chili, which enhance the flavors and provide nutrients in each meal. Most dishes are served with a side of chicken, pork, peppers, and green onions, which you can add to the main dish.

Pho (pronounced “fuh”) is a noodle-based soup, and one of the most common meals in Vietnam. It’s rich in nutrients, but low-fat. This traditional recipe involves pre-boiling the beef bones and meat to create a savory, tasty broth.

Healthy doesn’t have to mean boring. With just a little inspiration from around the globe, it can also mean exotic, unique, and incredibly delicious! 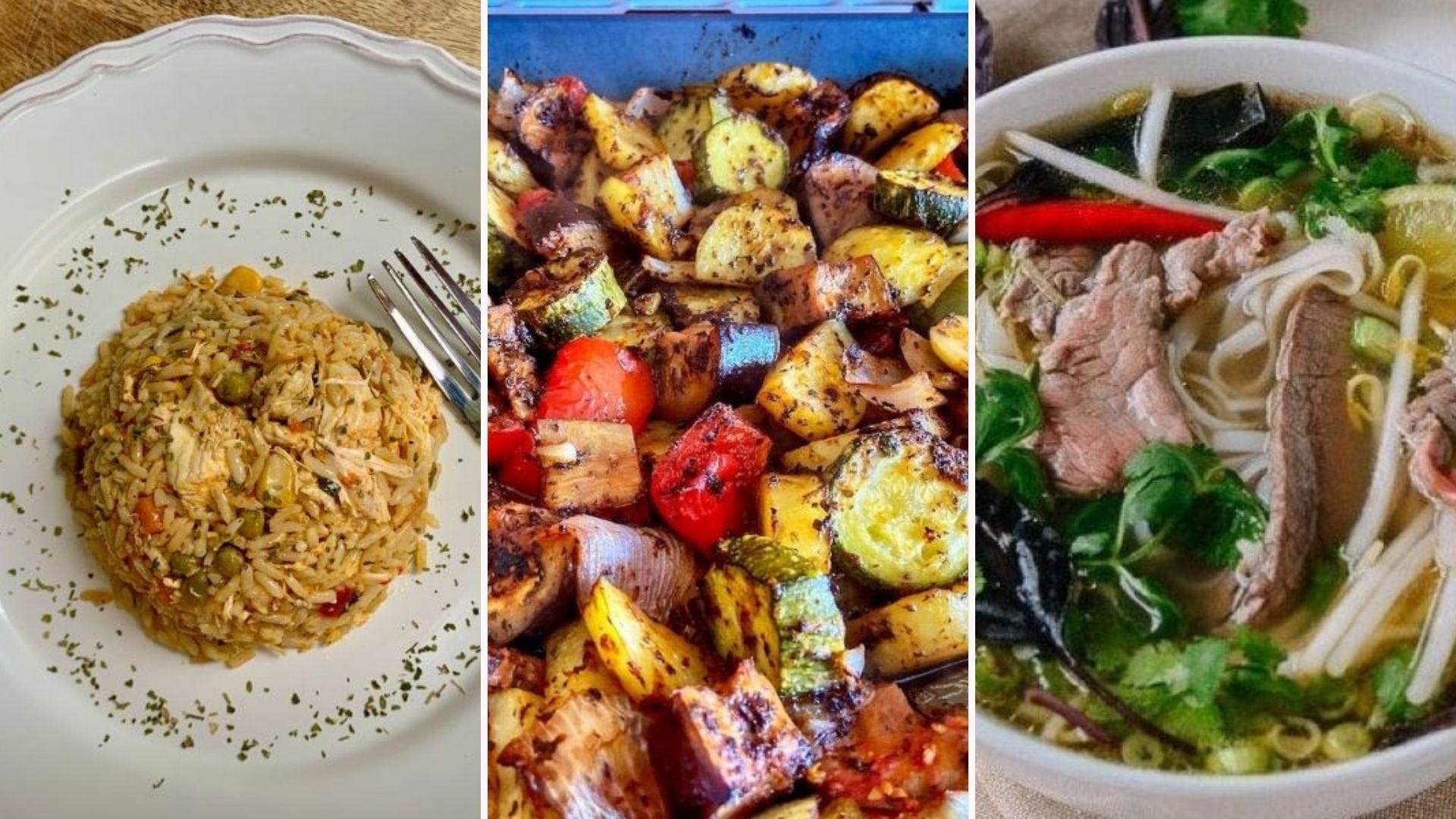