Back in 1960s and ’70s, the back pages of comic books were filled with ads for fun novelty items, like whoopee cushions, spy pens, decoder rings, and even Sea-Monkeys.

Luckily, Sea-Monkeys didn’t die off at the end of the ’70s—you can still buy and raise them. Now’s the perfect time to do so, too, because May 16 is National Sea Monkey Day!

The history of the Sea-Monkey began in 1957, when a guy named Harold von Braunhut started working with marine biologist, Dr. Anthony D’Agostino. They wanted to create some competition for in-home ant farms. The two came up with a “recipe” that would allow kids to dump a package of dried stuff into a fish tank and suddenly have little brine shrimp swimming around.

Sea-Monkeys don’t live in the sea, and they’re not monkeys. When they were first invented and marketed, they were called Instant Life. This was because they instantly came to life when you dumped the package of what appeared to be chunks of debris and dust into a tank of water.

The “Sea-Monkey” name change occurred in the 1960s because the long tails of the brine shrimp resemble monkeys’ tails. It sounded more fun, too.

The video below covers the history of the Sea-Monkey and goes in-depth about the science of these strange little creatures.

Sea-Monkeys aren’t as easy as just dumping the packet in some water. That’s probably why the pack I got as a kid didn’t do anything but make murky water. Of course, I also don’t remember seeing any lengthy instructions on the package.

There’s an official Sea-Monkeys website, where you can order some brine shrimp. You’ll also find all the proper instructions there, so you’ll get a tank full of lively little creatures instead of just foggy, stale water. You can also find plenty of kits on Amazon, including the official one.

If you follow these three steps, you’re sure to have better luck than I did! 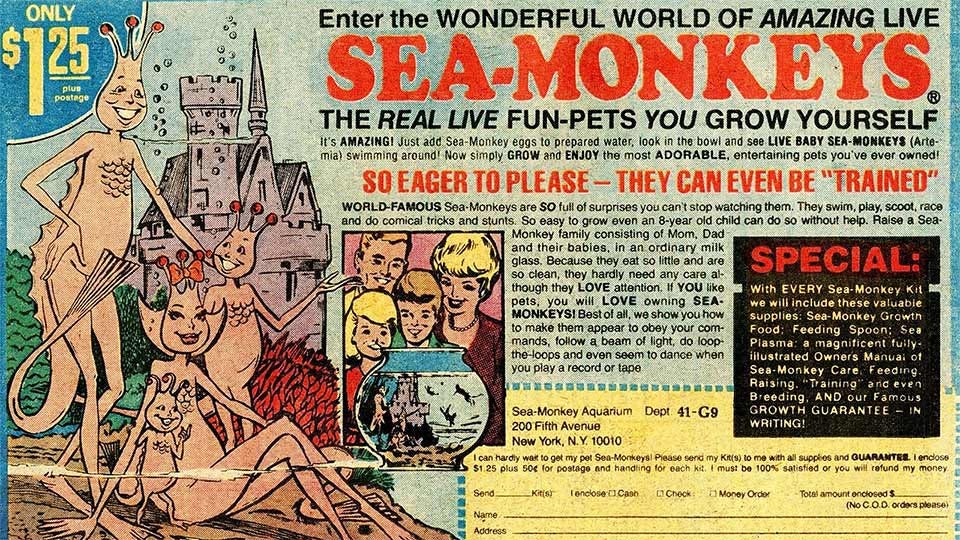