Ready to learn the basics for selecting the juiciest most tender steak, whether in a restaurant or grilling at home? Here’s what you need to know about each cut of beef, what it tastes like, and the best ways to cook it.

Selecting a steak you love is the first step but also be sure to understand your degrees of doneness as well. You can easily learn how to cook a steak to your desired degree, by checking this tutorial out.

What Does USDA Grade Mean?

The United States Department of Agriculture (USDA) grades the quality of beef based on two key criteria: the degree of marbling (streaks of fat in the meat), and the estimated age of the animal.

While there are technically eight grades of beef, when selecting a steak at the supermarket, you’ll likely only run into these three grades.

Select One of These Popular Steaks

We’ll give you a brief rundown on each of these steaks, to provide you with a better understanding of the most tender cuts of beef and how they taste. If you want to learn more about these cuts and more, check out this handy detailed chart.

The delectable ribeye is perhaps one of the most tender and juicy steaks available, and comes from the top part of the center of the rib, called the beef rib primal cut. So, if you’ve ever enjoyed a slow-roasted prime rib, it comes from there as well.

You can purchase this bone-in or boneless. Notice that by the high degree of marbling, these steaks are already tender. So, after any form of dry cooking, the steak will remain tender.

Enjoy this savory and juicy steak cooked over high heat, either chargrilled, broiled, or pan-seared.

These popular bone-in steaks come from the cross section of the short loin. While looking at either one of these steaks, you’ll notice a T-shaped bone that separates two different steaks: the filet and the New York strip steak.

According to USDA, the filet (or tenderloin) portion of the steak must be at least 1.25″ wide to be identified as a porterhouse. A T-bone will have an approximately half-inch wide part of the tenderloin. Think of it this way: the T-bone is a thinner and smaller version of the behemoth porterhouse steak.

So, if you want to enjoy two steaks in one, we say go all out with the porterhouse. And if you still want to enjoy the two-for-one deal, but with a smaller appetite, go for the T-bone.

Because there are two different steaks separated by bone, you’ll want to be careful when cooking either the T-bone or porterhourse. The filet portion is smaller and will cook faster, so try and keep it away from the heat source on the grill.

We’ll break down and explain each of those steaks separately below.

This steak is known to be both fancy and expensive, mainly because of its buttery and mild flavor and absolute tenderness. Honestly, if cooked right, you could cut it with a butter knife.

The filet, or Filet Mignon, comes from the tenderloin, and more specifically, the short loin under the ribs. If you look at a tenderloin in the chart referred to above, you’ll notice a long section that tapers on one end. The filet mignon is located at the narrower end.

The best way to cook a filet is by searing the outside on high heat in a cast-iron skillet and letting it rest in your hot skillet for a few minutes, then removing it from heat source. This will allow it to continue cooking on a gentle heat (after searing both sides) without overcooking.

This boneless beauty comes from the short loin, behind the ribs, and looks slightly rectangular, with one narrower side.

New York Strips are beefy and tender, while also offering a nice balance of lean and fatty meat. Strips are most certainly not as tender as a ribeye or filet but still delicious. Either pan-sear, broil, or grill this steak on an open flame.

The sirloin is less expensive than the other cuts we’ve described, yet it is still notable and very popular amongst many. The sirloin steak comes from a portion of the beef loin primal cut, which yields lean meat.

A butcher will separate the sirloin into two sections: the top butt and the bottom butt. The top sirloin is flavorful and an affordable option for the grill, while the bottom is ideal for roasting.

In recent years, the flat iron has gained popularity, and you might have noticed it has popped up on menus in restaurants and in grocery stores, too.

This steak is well-marbled and almost as tender as a tenderloin, but it’s way less expensive than a steak like a filet mignon.

The Flat Iron has an intensely beefy and rich flavor, and often comes marinated and tastes best when cooked fast on high heat to bring out its meaty flavor.

So, now you have the information, all you need is a trip to your local butcher where you will select one of these steaks. 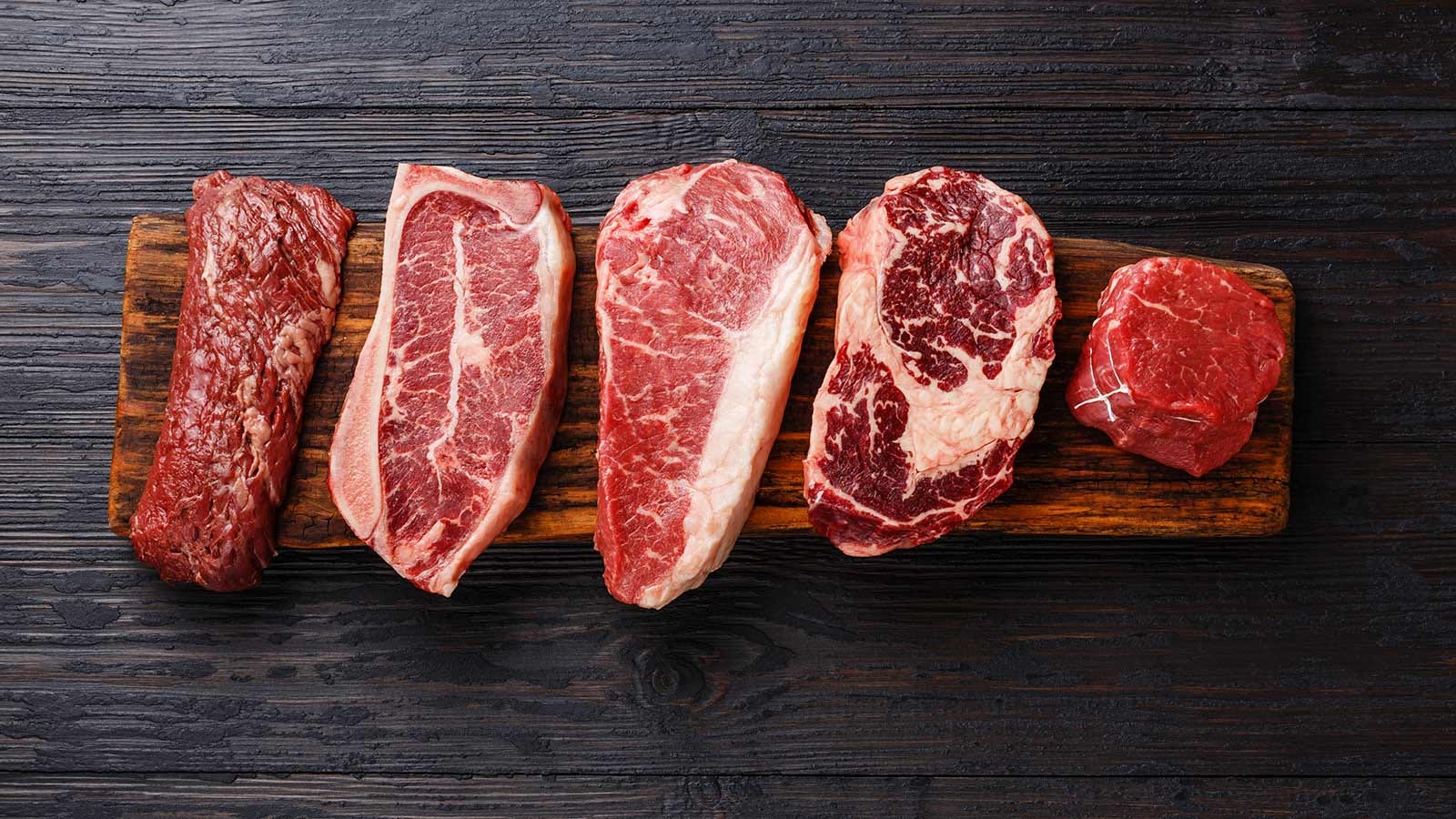