Feeling stressed and burned out? If there was ever a time to indulge in the totally absurd, escapist fantasy world of a rom-com, well, that time is now! Here are our top picks you can stream right now.

This pandemic has been a stressful, emotional journey. It’s not unusual to feel exhausted and overwhelmed at the end of each day, even if you’ve done nothing but stay home (which is good!). At times like this, it’s important to do things that make you smile and lift your spirits. And sometimes, all it takes is a feel-good romantic comedy.

Rom-coms might be a bit on the silly side. And sure, they might be completely unrealistic. However, those attributes are precisely what makes them such a great break from reality. Instead of thinking about COVID-19 or the state of your job, you can think about, well, nothing, except a bit of fictional romance. The best rom-coms can make you laugh and cry, but leave you feeling all warm and fuzzy at the end.

Fortunately, there are a ton of them you can stream right now, including old classics and new favorites. To help you pick one and start watching, we’ve organized them by streaming service so you know just where to go!

Rom-Coms You Can Stream on Hulu

Whether you like your romance with a side of silly or bittersweet, there are tons of options on Hulu. Below, you’ll find some of our favorites.

Friends with Kids has a great cast (Jennifer Westfeldt, Adam Scott, Kristen Wiig, John Hamm, Ed Burns, Megan Fox, Maya Rudolph, and more), and it’s really good despite being a bit cliché. Best friends Julie (Westfeldt) and Jason (Scott) decide to have a child together without getting married or even dating. They both want a kid and are sick of waiting until they meet someone.

They both become involved with other people once the baby is born. Of course, by then, as you probably guessed, they realize they have feelings for each other. It’s cute, funny, and has lots of great marriage humor.

This cute classic stars Will Smith as Alex “Hitch” Hitchens, a dating coach who’s very good at his job. He works with goofy Albert (Kevin James) to try and get a woman to fall in love with him.

Meanwhile, Alex falls for Sara Melas (Eva Mendes), who doesn’t fall for his methods, and then figures out what he does for a living. Everything gets messy, of course, but in the best possible movie way.

Natalie Portman and Ashton Kutcher play the couple trying to make casual sex work while they clearly have deeper feelings for each other.

Up in the Air

Fan of George Clooney? Then you’ll love Up in The Air! It’ll also remind you what it’s like to be on a plane, if you’ve been missing traveling. Clooney plays Ryan Bingham, who travels for a living, but then a young coworker (Anna Kendrick) pitches an idea that would stop his traveling altogether.

Bingham then takes her on a tour to show her why her idea wouldn’t work. And no, these two aren’t the love story—Bingham actually falls for another frequent flier (Vera Farmiga).

Up in the Air is funny and sweet, and will probably make you cry a bit.

If silly rom-coms are more your thing, check out Morning Glory. It stars Rachel McAdams as Becky Fuller, a new producer on a national morning news show called Daybreak. She tries her hardest to increase the ratings by bringing in a legendary anchorman, but things don’t go as planned.

Cal Weaver (Carell) and his wife Emily (Moore) might be getting a divorce, but that’s not what Cal wants at all. He meets Jacob Palmer (Gosling), the town player, who gives him a makeover and helps him put himself out there again. There are a few love stories here, and they’re all great!

You’ll need the HBO MAX add-on to stream this one.

This typical rom-com is about two best friends who are clearly in love. Everyone else can see it, even if they can’t (or, at least, don’t want to admit it). Drinking Buddies has a relaxed vibe and a cool cast, featuring Olivia Wilde, Jake Johnson, and Anna Kendrick.

What starts as a work relationship develops into a close friendship, and then more. The nice thing about this film is it’s more realistic, which makes it easier to relate to.

Based on the novel of the same name by Galt Niederhoffer, The Romantics is about a group of best friends that makes you wonder just how and why they keep hanging out.

Two friends are getting married, and are reunited with the other five members of their tight-knit group. However, the bride and her maid of honor are passive-aggressively feuding over the groom, so things definitely get interesting.

In What Men Want, Ali Davis (Taraji P. Henson) is a hard-working sports agent who’s been passed up for a promotion she thought she was going to get. Furious and fed up with the male-dominated world, she goes to a psychic for answers. She ends up drinking something that allows her to hear what men are thinking and quickly realizes it’s more of a blessing than a curse.

Davis uses her new superpower to get ahead at work and ends up falling for someone in the middle of it all. This film is different, and you’ll definitely laugh a lot while watching.

Rom-Coms You Can Stream on Netflix

From original content to modern classics, Netflix has whatever you need to get your rom-com fix. These are some of our faves.

Just Go with It

If you’re a fan of Adam Sandler, you’ll love Just Go with It. Sandler plays plastic surgeon Danny Maccabee, who regularly pretends to be married so he can hook up with women with no strings attached.

Then, he meets Palmer (Brooklyn Decker) and wants something real. Unfortunately, his schtick isn’t working on her. So, he asks his assistant, Katherine (Jennifer Aniston), to pretend to be his soon-to-be-ex-wife.

Silly? Yes. Totally improbable that Brooklyn Decker and Jennifer Aniston would ever fight over Adam Sander? Sure. But it’s also a cute, mindless movie that will keep you smiling.

Always Be My Maybe

The Netflix original Always Be My Maybe is one of those rom-coms that has a predictable ending, but is fun to watch, regardless.

Ali Wong plays Sasha Tran and Randall Park plays Marcus Kim, two childhood sweethearts who run into each other as adults after not speaking for 15 years. They’re completely different, but there’s clearly still something between them.

Just Friends is a classic early 2000’s movie that features Ryan Reynolds and Anna Faris at their goofy best. Reynolds is Chris Brander, a successful record executive who was the class nerd in high school. He was also best friends with Jamie Palamino (Amy Smart), who isn’t interested in him romantically.

Chris returns home 10 years after Jamie rejects him with pop superstar Samantha James (Faris). Everything is different—except his feelings for Jamie, of course. Watch, laugh, and enjoy all that good ’00’s nostalgia.

We feel About Time never got the attention it deserves! It has a unique premise and wacky British humor. Domhnall Gleeson plays Tim Lake, who meets and falls in love with Mary (Rachel McAdams).

Tim and the other men in his family can travel through time—a power Tim quickly realizes comes with consequences. To avoid giving away too much, we’ll just say this movie is an adorable love story between a boy and a girl and a father and son.

To All the Boys I’ve Loved Before

If you haven’t yet watched To All the Boys I’ve Loved Before, you should check it out immediately! In our opinion, this is one of the cutest teen rom-coms ever! It’s one of those movies you can watch over and over without getting sick of it.

Lana Condor and Noah Centineo are perfect as two teens who pretend to be in a relationship to make an ex jealous. Of course, they end up falling for each other. It’s one of the sweetest movies ever. There’s also a sequel, but it wasn’t as good as the first.

He’s Just Not That Into You

Oddly, He’s Just Not That Into You is based on a self-help book, but it works. The story follows nine people and their love lives, and there’s a character and or situation everyone can relate here.

It’s also has a pretty great cast: Jennifer Aniston, Ben Affleck, Ginnifer Goodwin, Drew Barrymore, Scarlett Johansson, Bradley Cooper, and Justin Long. Does it get any better than that?

Rom-Coms You Can Stream on Amazon Prime Video

Amazon Prime Video has some true classic romantic comedies from almost every decade. We recommend you check out the gems below.

A modern classic, Bridget Jones’s Diary is silly, adorable, and will make you feel all warm and fuzzy inside. If you’ve never seen it, now’s the time, and even if you have, it’s a fun one to rewatch.

Looking for a true classic? Well, look no further. Go on a Roman Holiday with Audrey Hepburn and Gregory Peck. Hepburn plays Ann, a touring European princess who decides to take off for a night in Rome.

After falling asleep on a park bench, Ann is found by American reporter, Joe Bradley (Peck). Although he’s just supposed to interview Ann, the two fall for each other. This one is a true fairy tale—princess and all!

Pretty in Pink isn’t nearly as old as Roman Holiday, but it’s still a classic—an ’80’s classic, with all the hair and parachute pants that entails.

Andie (Molly Ringwald) is a high school outcast who really only hangs out with her best friend, Duckie (Jon Cryer), who has a mad crush on her. But when popular Blane (Andrew McCarthy) asks Andie out, she starts to fall for him. However, their different social statuses don’t make things easy.

A true ’90’s gem, The First Wives Club is about three former college friends (Bette Midler, Goldie Hawn, and Diane Keaton) who reunite after 30 years to get revenge on their ex-husbands.

There’s not much more to say about this one except it’s basically perfect.

The Big Sick is just sweet! Written by real-life couple, Emily V. Gordon and Kumail Nanjiani. it’s loosely based on their relationship, which makes it even more interesting. Nanjiani plays Kumail, a Pakistani comic who falls for American grad student Emily (Zoe Kazan).

After Emily falls ill, things get serious. She lapses into a coma and Kumail bonds with her parents. This movie is so, so good and definitely worth a watch.

It’s very possible you’ve never heard of What If, which is a real shame! This incredibly underrated film stars Daniel Radcliffe and Zoe Kazan as Wallace and Chantry. They become close friends, but everyone else thinks they should be more.

The trouble is Chantry has a boyfriend. This quirky, unique movie is full of whimsical little moments that make it oh, so adorable! 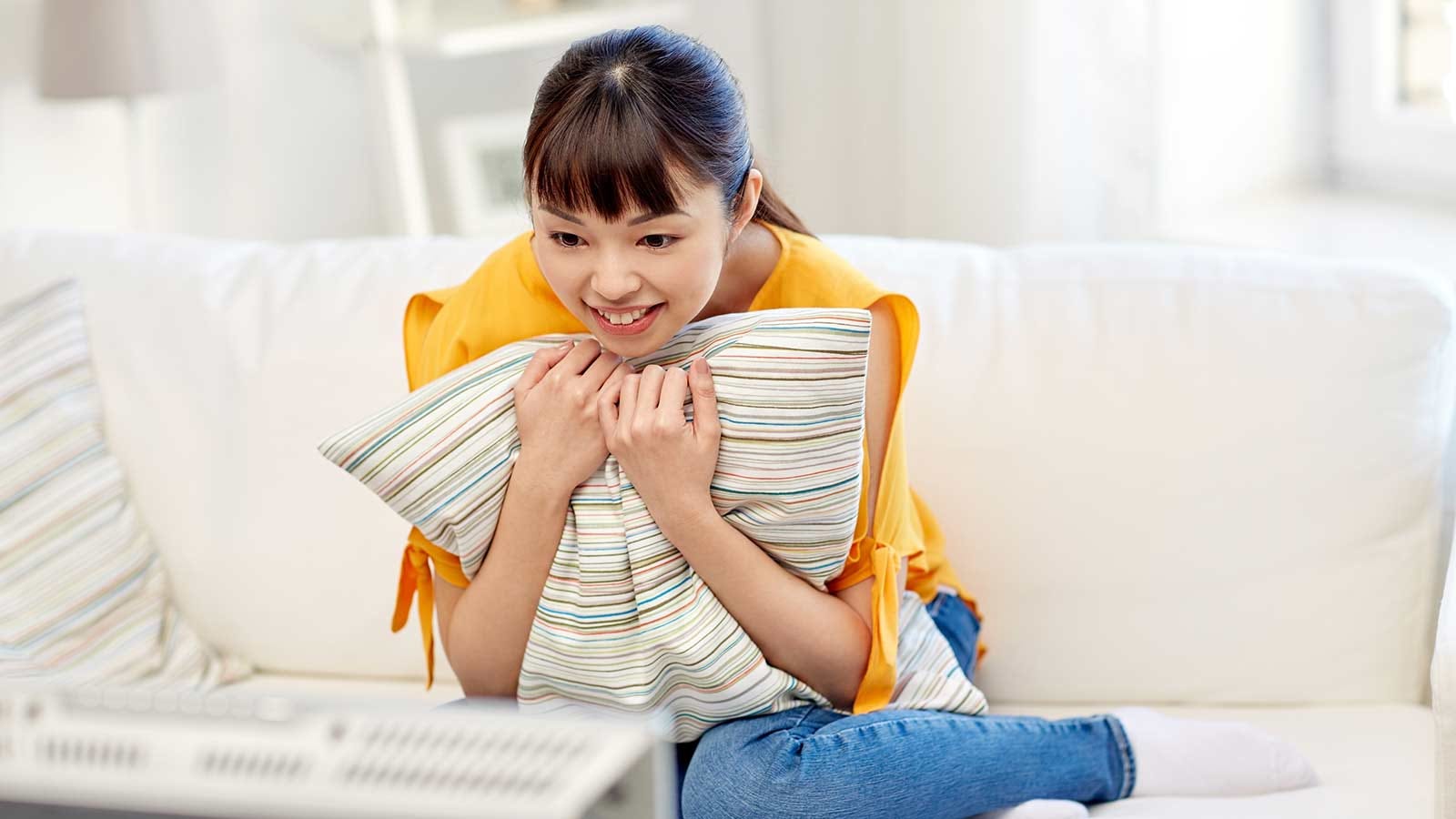