On this very day, 60 years ago, American moviegoers were introduced to one of Alfred Hitchcock’s greatest films: Psycho. And our relationship with showers and spooky Victorian houses was never quite the same.

It was June 16, 1960, when people went to the theater to enjoy an Alfred Hitchcock mystery with maybe a dash of suspense. They left wide-eyed, after seeing things they weren’t used to seeing in a mainstream film at that time.

The Making of Psycho

Often classified as a horror film, and, arguably, a catalyst for today’s slasher flicks, Psycho definitely belongs in the thriller category. It’s a memorable film that will send chills down your spine. Even though it’s now six decades old, it should be on every horror- or slasher-lovers watch list.

The film debuted about a year after the publication of the Robert Bloch novel on which it was based. Hitchcock both directed and produced the film, which was written by Joseph Stefano.

While the film features a fantastic cast, including Vera Miles, the story revolves around Norman Bates, played by Anthony Perkins, and Marion Crane, played by Janet Leigh.

We won’t give too much away, but seriously, 60 years is way too long to have to worry about spoilers, so just stop reading here if you want to watch the film with fresh eyes.

Bates is an unstable motel owner with mommy issues who enjoys stuffing birds and peeking in on the women he sets up in the room next to the office.

It’s a creative film, even by today’s standards. It’s in black and white, but it’s aged incredibly well. The film is still popular not only because Hitchcock was a Hollywood icon, but also because it has a twist that made people squirm.

However, the main topic of today’s discussion is why the shower scene made people very uneasy about showering. Like, ever again.

What Makes the Shower Scene So Iconic?

Similar to the first Friday the 13th film, Norman Bates isn’t exactly the killer we perceive him to be. Here’s your spoiler alert—Bates believes he’s his dead mother when he kills. Speaking of his mother, her wilted carcass sits in a chair staring out a window in the Bates home behind the motel. She lives on in his head, though.

The scene when Norman, wearing a dress and wig, stabs Marion Crane while she’s showering, is, arguably, the most iconic murder scene in cinema history. It’s iconic not only because of the shock factor, but also because of the stellar acting and how the scene was filmed.

Marion is murdered within the first 20 minutes of the film. Her death scene is a dramatic 45 seconds of kitchen-knife stabbing. You see the sheer terror on her face as she bleeds out, grabs for the shower curtain, and falls dead. The final capture of blood (chocolate syrup) running down the drain will leave you in awe.

The masking of the killer (you see the wig, dress, and knife, but you don’t see Norman’s face), the terror, and the fact that it happened in such a vulnerable situation were all lessons to future filmmakers. It was a master class on how to psychologically scare moviegoers without all the gore that’s usually rampant in horror and slasher flicks.

If you’ve never seen Psycho, now’s the time! Thriller, horror, and slasher fans will all find something to admire in this iconic film. 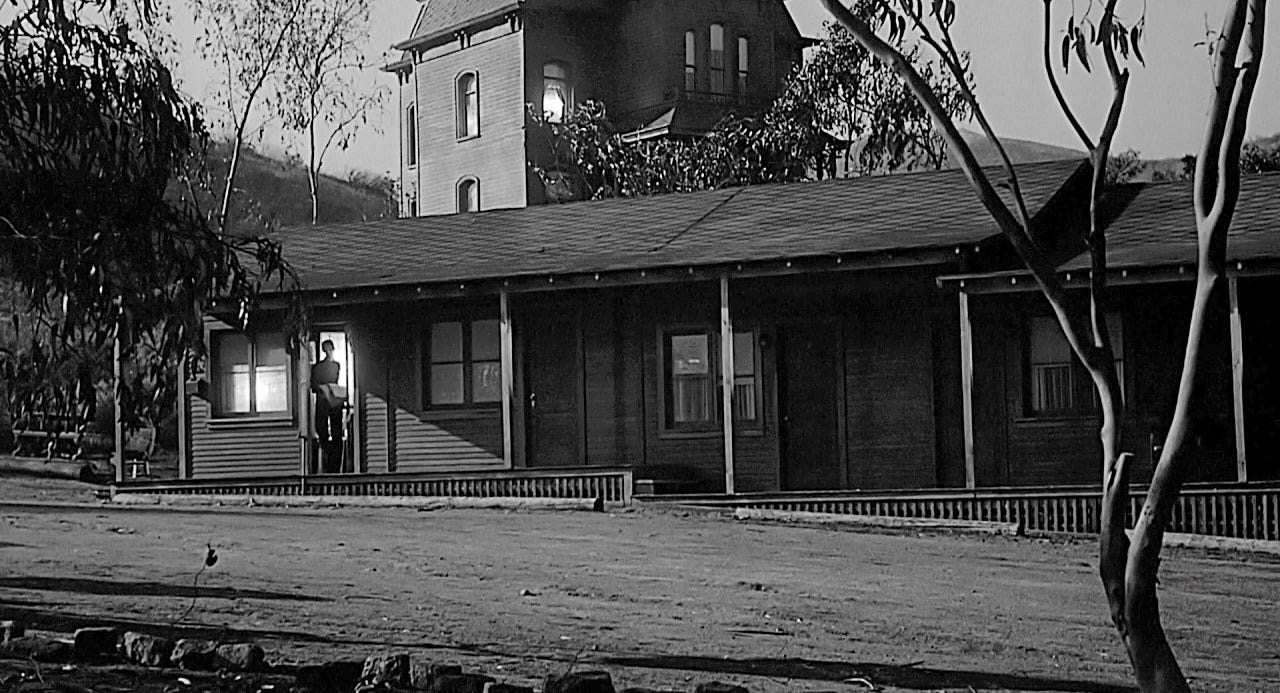