Last month, the Alaskan government moved the “Magic Bus,” in which Chris McCandless, whose story was depicted in the book and film, Into the Wild, lived and died. I hiked there myself and absolutely understand why.

In 1990, American Christopher McCandless (aka Alexander Supertramp) traveled across the U.S. intent on “fleeing civilization.” After excelling in college, the nonmaterialistic explorer donated his savings to charity, cut off all communication with family and friends, and set off.

McCandless first landed in Arizona, and then continued his journey on foot. His expedition led him to South Dakota, Mexico, and Canada, and he met some incredible people along the way.

He eventually made it to Alaska, where he found the abandoned bus, and his idea of a perfect escape from society. Four months later, his lifeless body was found by an Alaskan moose hunter.

After seeing reports about the discovery of McCandless’ body, author Jon Krakauer began investigating his life, and eventually went on to tell his story in the book Into the Wild.

Once it hit the shelves in 1996, the book became an international best-seller. Millions of young dreamers connected with McCandless’ story and his journey. Krakauer noted that during his travels, McCandless didn’t share his real name with anyone, so it’s ironic that someone so intent on escaping society became a household name.

On the other hand, many people thought McCandless was reckless and underprepared to set off into the wild Alaskan terrain without the proper gear or knowledge. Despite the criticism, this larger-than-life (but true) story was hard for many to resist. As a 20-year-old, I felt a compelling attachment to McCandless’ desire to flee the mundane world and escape from society, so what happened next was only natural.

After taking a seasonal job in Alaska and traveling across the U.S., I learned that “the magic bus” was within hiking distance. Now, almost a decade later, I realize it was the highly romanticized version of McCandless’ story that inspired me to go on this risky adventure. Here’s the story of that trip.

Setting Off at Stampede Trail

Like many others, I became fascinated with the idea of setting off into the wilderness to find the bus, like some sort of pilgrimage of self-transformation. Two incredible friends and I were all willing to risk the treacherous terrain to go in search of this decrepit old bus, that had been aggrandized by Hollywood. Together, the three of us prepared for a journey that would change us forever.

After being provided transportation to the head of Stampede Trail, the same location from which McCandless began his journey “into the wild,” we had about a 50-mile round-trip hike ahead of us. The flat, yet muddy, terrain was full of potential hazards. Hiking through Alaska’s wide-open spaces is a humbling experience, as both untamed beauty and danger surround you.

We were fortunate enough to spot a bear, and a mother moose and her calf on our expedition. The last frontier has wildlands full of prowling lynx, giant blond grizzlies, eagles gliding on updrafts, and massive moose, all enclosed by the picturesque view of soaring mountains. It’s just as beautiful as you would imagine, but if anything goes wrong, you’re completely on your own.

We arrived at the Teklanika River by evening and set up camp about 30 yards to the side. All three of us fell asleep to the sound of the rushing waters, fearful of what the following day would bring.

We all understood that fording the river could make or break our experience on the trail. In the worst-case scenario, failing to cross properly could even end our lives. Just two years prior, a 29-year-old Swiss woman had drowned there after losing her footing and being pulled under. The rapid current of the Teklanika River is, ultimately, what prevented McCandless from leaving the bus after being out in the wild for too long without food.

However, we had such a desire to understand his experience, we were willing to risk the river. We had spent some time debating and analyzing various perilous scenarios, as well as plans for any unanticipated dangers that might lie ahead.

It took us a few hours (and miles) traveling upstream along the river to find the perfect crossing location. We handcrafted sturdy hiking sticks to help us gauge the depth of the water before moving forward.

The location we chose had a slight bend. Together—with arms linked and backpacks unfastened—we followed the white ripples which consistently stirred on top of the roaring water.

Each step was counted with a strict chant: One, two, three, left; one, two, three, right. We took our time wading across the river and regularly checked on each other.

With each step, the current became more vigorous and the water deeper. Eventually, we were waist-deep pushing against the strong current to move forward. All of us were uneasy, pushing forward to get free from the relentless pressure of the water.

We allowed the fear and anxiety of the crossing to push us closer to our goal of reaching the bus. After making it across, we embraced each other, relieved, without considering we’d have to cross again on the way back.

After traversing that river twice, we all have a profound respect for Mother Nature, and a deeper understanding of why McCandless was hesitant to cross it in his weakened state.

The night was fast approaching. We were used to well-lit nights, but by late July, they’d finally begun to deepen to darkness. After hours tromping through the dense, mosquito-infested trail, without warning, the path opened up to reveal the goal of our trek: Bus 142.

While arriving at the site felt slightly eerie at first, seeing the yellow and green bus alleviated any uneasiness we were feeling.

Seeing and touching it gave us a rush of freedom and excitement. We had made it to the bus, just as McCandless had about two decades prior. We set up camp and closed our eyes, listening carefully to the sonorous sounds of the great wild, which slowly hushed us to sleep.

The following morning, seeing the bus in more detail was an emotional experience. Although it still looked much like the original images taken by McCandless, it was now peppered with bullet holes and most of the windows were broken.

We spent that day and the next solemnly observing the place McCandless had designated as his home in the summer of 1991. We took turns writing entries in the guest book that had been left there for all adventurous visitors to sign, and then explored the bus.

Before heading back, we slept out in the open in our sleeping bags, surrounded by the pure, untainted sounds of nature.

For years, the bus had drawn eager travelers from around the world. After multiple rescues and two tragic deaths, the Department of Natural Resources decided to remove the bus.

Although Krakauer’s words beautifully recount McCandless’ story, it’s not unfounded criticism to say the story is highly romanticized. The big gaps in his life story and a more complete picture of his childhood and mental health emerges in The Wild Truth, a memoir by McCandless’ sister.

Like myself, many people have risked grave danger to retrace the steps of a man who wanted to escape the world, based not on that more complete picture, but on the romantic tale of adventure and hermitage presented by the book and film.

And that’s exactly why the Alaskan government was forced to move the famous bus. McCandless’ life was publicized and romanticized to the point that others felt a need to, literally, follow in his footsteps, resulting in costly rescues and tragedy.

Certainly, the Alaskan wilderness is a perilous place, regardless of your destination. However, with the bus gone, the allure of it for inexperienced and disillusioned young hikers is greatly diminished.

The time my friends and I spent at the magic bus had a significant impact on us. We felt (and still feel) an immense connection to the story that drove us to hike there, face our fears in the wilderness, and find the bus. While the memory of our adventure will stay with me forever, a decade later, it’s clear to me that I played a role in the removal of the bus.

Like so many others, I risked great danger hiking to a location I never would’ve known existed if it weren’t for the thrilling story told in Into the Wild. The news that the bus had been moved to an undisclosed location forced me to revisit my memories and acknowledge that I, too, had romanticized the experience. 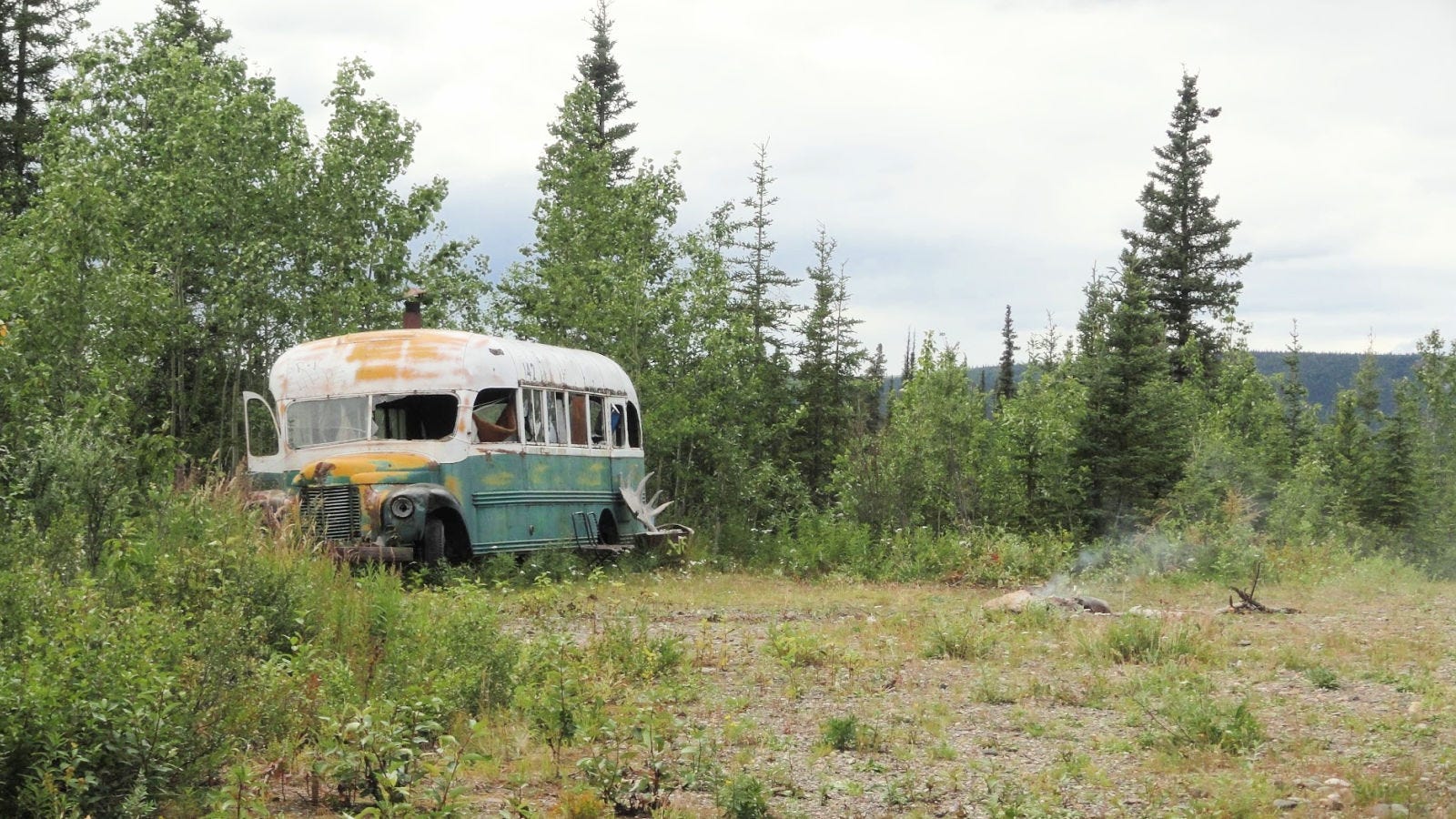