Whether they’re still protecting ships or not, the lighthouses along the coasts of the United States make fantastic vacation destinations. If you’re as fond of these beauties as we are, spring and summer are the perfect time to check out any that are nearby—or take a road trip and see them all!

The Cape Flattery Light is located on the Makah Indian Reservation on Tatoosh Island, Washington. It’s an historic light that was deactivated in 2008 but was deemed a National Treasure by the National Trust for Historic Preservation.

The lighthouse itself is closed to tours and the public, but you can get a beautiful view of it when you visit Cape Flattery if you’re willing to walk about half an hour. This lighthouse isn’t as spectacular a piece of architecture as some of the others on our list, but it has a fascinating history and is located in a gorgeous area.

While it’s not the only black-and-white striped lighthouse out there, the Cape Hatteras Light in Buxton, North Carolina, is one of our favorites. The bright red brick of the base really makes the black and white ribbon-looking striping even more dramatic.

Although it once protected ships in the dangerous waters of the Atlantic, it was abandoned in 1935. At that time, the National Park Service took it over. This lighthouse actually isn’t sitting in its original location—it had to be moved as the waterline started edging closer and closer to it.

Due to continuing restoration efforts, the lighthouse might not be open for climbing in 2022. In the meantime, though, you can check out the live webcam.

Built in 1894, the Heceta Head Light is still an active lighthouse. It also boasts the strongest light, providing 21 nautical miles of visibility on the Oregon Coast.

The house where the assistant lighthouse keeper used to live is also now a bed and breakfast run by U.S. Forest Service. As you’ll be staying right on the property, you’ll get stunning views of this historic landmark.

The Boston Light was the first lighthouse built in the United States, and it’s also the only one that still has a lighthouse keeper. While the lighthouse is now fully automated, the keeper ensures that things are always running smoothly.

Located on Little Brewster Island, the Boston Light has been standing since 1716 and is a National Historic Landmark.

RELATEDThe Best Luggage Backpacks for Your Next Adventure

The Halfway Rock Lighthouse gets its name from its location—halfway between Cape Elizabeth and Cape Small in Harpswell, Maine. It’s privately owned.

The Halfway Rock Lighthouse was dubbed the “stag lighthouse” when it was still in operation because it was so dangerous to get to its remote location, the keeper had to stay there alone and leave his family behind.

Visiting the actual island isn’t safe, but you can get a see it from The Portland Observatory. There are also boat and helicopter tours that will take you by it, or you can check out the live webcam.

Ludington, Michigan, is a beautiful beach town with a ton to see. Ludington State Park is home to the Big Sable Point Lighthouse, and it’s a beautiful sight to see among the sandy dunes of Lake Michigan.

There are also tours of the lighthouse available. Big Sable Point Lighthouse is still active, and if you’ve ever boated on Lake Michigan, you know it’s an essential feature on the shores of those rough waters.

This towering red monolith is the Ponce de Leon Inlet Light and it serves as both a lighthouse and museum. It’s a National Historic Landmark located in Ponce Inlet, Florida.

The Pigeon Point Lighthouse is sometimes called a Light Station and it’s been around since 1871. This lighthouse is another that’s still active, and it’s conveniently located right off of State Route 1 in Pescadero, California. It’s easily accessible and open to tours.

The Cape Henry Lighthouse is strategically located in an area with a lot of shipping traffic. Located at Cape Henry in Fort Story, Virginia, it marks the southern entrance to the Chesapeake Bay.

What’s especially unique about the Cape Henry Lighthouse is that there are two of them, and both are National Historic Landmarks. The first lighthouse was built in 1792, and the second followed nine years later due to worries the first wasn’t stable enough.

The Rose Island Light in Newport, Rhode Island, has a fascinating history. Built in 1870, it was designed by Vermont architect Albert Dow. It has four sister lights, located at Sabin Point, Colchester Reef, Pomham Rocks, and Esopus Meadows.

The Rose Island Lighthouse stands atop a bastion of Fort Hamilton that was abandoned in 1970. The Foundation was created 14 years later for restoration purposes, and the light was finally relit in 1992 for private use.

You can tour and even stay the night at the lighthouse, which is only reachable by boat.

There are amazing lighthouses all over the world, but the U.S. is a treasure trove of these exciting, architectural wonders. If you’ve never visited one, it’s time for a road trip! 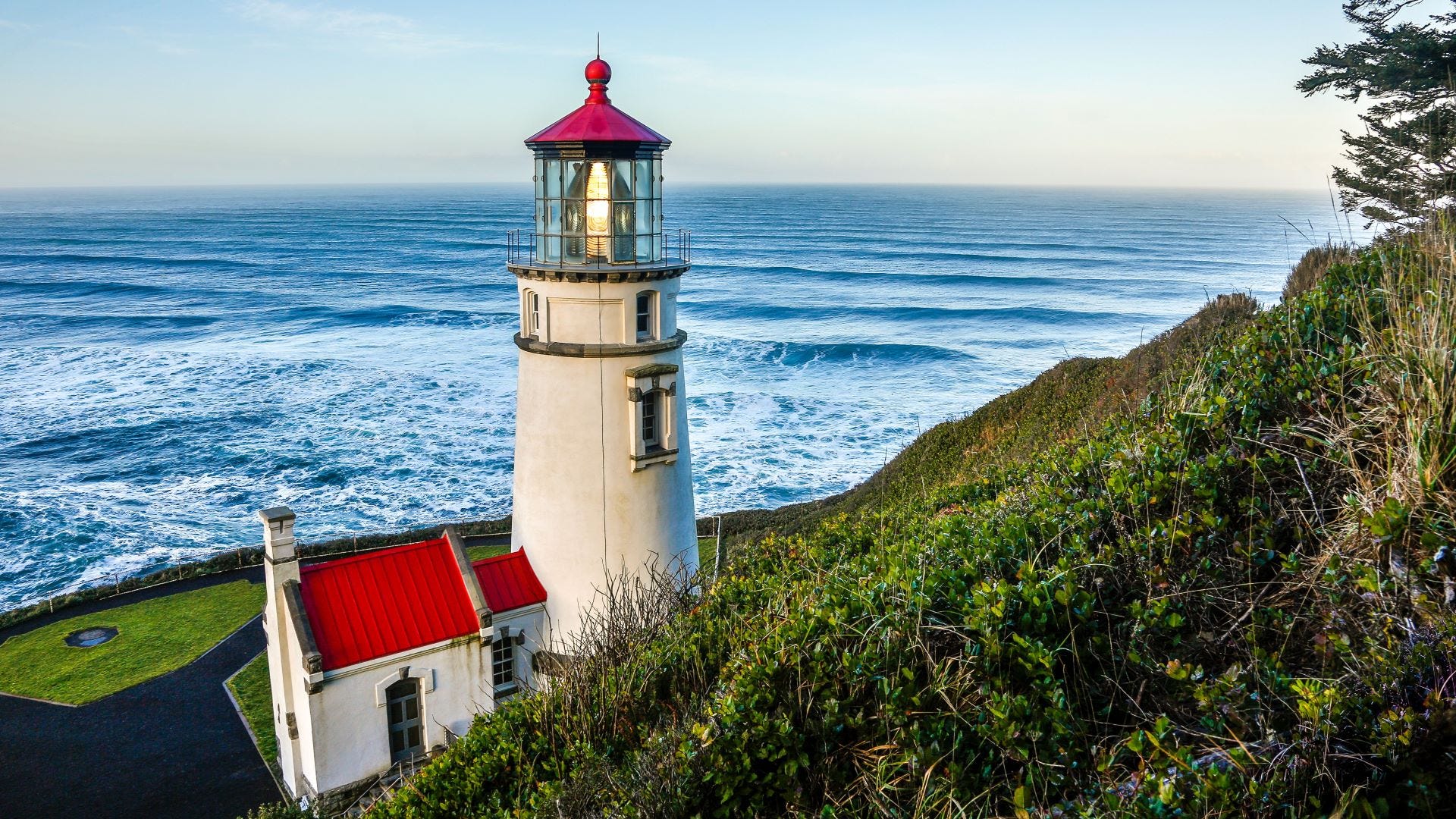