Dogs can makes the best running buddies—but you can’t just grab your leash and go. You need to make sure you’re doing it right.

Like all amateur athletes, your pooch can push things too far. Here’s how to start running with your dog—safely.

Be Sure Your Dog Can

Not all dogs are fit to be distance runners. In general, it isn’t healthy for “brachycephalic” or short muzzled dogs like bulldogs and pugs to run at speed for longer than a few minutes. And, while labradors and huskies can make great running companions, if they’re overweight, their joints might not be up to hard miles, at least at first. Size matters less than you’d think: Some small dogs like Jack Russell terriers are great running buddies, while some large dogs like Great Danes are best left on the couch.

And, of course, age is a major factor. Puppies shouldn’t be brought running; up until about 18 months, their bones and muscles are still developing. It’s also possible your dog is too old to start running now.

If you’re unsure whether or not your dog is up for the hard miles, there’s an easy way to find out: ask your vet!

Before picking up the pace, make sure it can:

Having your dog obey basic commands isn’t just about making your run easier, it’s about safety. If either of you gets tangled up in the leash, you can get hurt. A dog that’s inclined to dart out into traffic can take you with it.

If you don’t have total faith in your dog, practice obedience on walks—and then start to introduce running. You can mix things up by walking for 100 yards, then running for 100 yards then walking again to practice.

Your dog doesn’t need Nike’s fancy new Air Zoom Alphafly Next% to run, but it still needs a bit of gear. Make sure you’ve got:

If you and your dog are starting to run for the first time together, that’s awesome. Couch to 5k is just as good a program for dogs as it is for humans. By the end of the nine weeks, you’ll both be comfortable running, and you can just gradually build up from there.

On the other hand, if you already run regularly and your dog doesn’t, you’ll need to take things slow. Start by adding running intervals to your daily dog walks. Then, once your dog can sustain a gentle jog, begin bringing it along on occasional shorter, easier runs. As it gets fitter, you can take it with you more often.

Keep an eye on your dog while you run. They’re prone to a few different problems we humans don’t really need to think about.

If it’s hot and humid, be very careful. Dogs can’t sweat so they cool themselves down by panting and lying in the shade. If you’re pushing them to run faster, they can easily overheat. Bring lots of water, and don’t try to set mileage records. If in doubt, don’t bring your dog when it’s roasting out.

We’ve got shoes to protect our feet—dogs don’t. After each run, check their paws for cuts, scuffs, bruises, and even burns. If they look a bit sore, give them a few days off. Also, it’s better to run on natural trails instead of paved roads and trails if you can.

Watch your progression. Some dogs that are well able to run with you when you’re doing gentle three-mile loops won’t be able to keep up as you improve. My girlfriends’ dog, Bing, has just had his running career cut short. He was very happy on shorter slower loops, but now that the pace and distance are increasing, it’s too hard on his little legs.

Running with your dog is a great way to bond—and get everyone’s exercise in. Even just a couple of gentle 40 minute jogs a week will go a long way towards keeping a high-energy dog entertained. 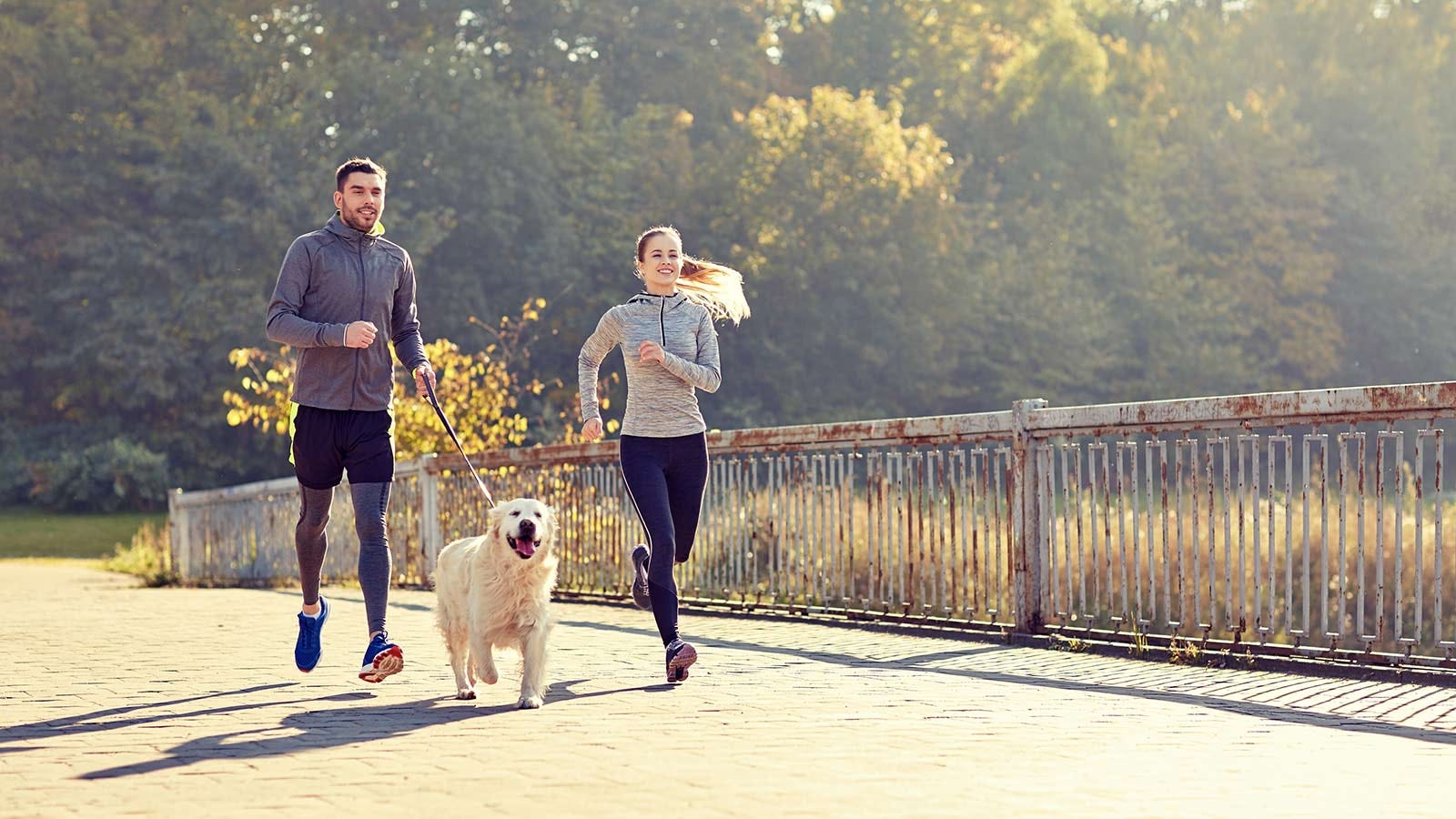