‘Tis the season to cook with the most iconic of fall produce! You already know you can choose between pumpkin or squash, but there’s a long list of delicious squash options. Which one should you choose?

Whether you’re shopping at the grocery store or trying to decide how to use fresh CSA fare, you’re probably going to encounter a wide range of squashes this fall. Let’s break down the differences, and discover which types of recipes will suit each variety!

When Is Squash in Season?

As you shop for produce, you might come across the term “winter squash,” which can be confusing since we often associate squash with fall. However, it’s actually divided into two types: summer and winter. Winter squash simply means the second type, or what many people think of as fall squash.

Winter squashes are often harvested fall through winter, which is why they’re associated with autumn. They keep well, so you can buy some kinds all year, but they taste best in early fall, when they’re actually in season. So, now’s the time to buy a squash or three!

As you shop for winter squashes, choose those that feel heavy for their size and have hard, rich-colored, unblemished rinds.

The more popular squashes on this list, like butternut and acorn, will be easiest to find. However, it’s also fun to experiment with the lesser-known varieties. Here are the basics you need to know to get cooking.

Buttercup squash is one of the sweeter-flavored winter squashes—it tastes similar to pumpkin. You might also see it called “turban squash” due to the turban-like cap on the top.

While its texture is smooth, it can also be a little dry, so opt for recipes that help preserve water content, such as steaming or roasting. The flavor is mild but decidedly squash-y. Buttercup squash works well in classic autumnal recipes, like soups, or when stuffed with complementary ingredients.

As its name suggests, butternut squash has a sweet, buttery, nutty flavor, with a creamy texture. It shares some flavor similarities with buttercup squash, but butternut is the better-known variety. You’ll want to use butternut in recipes that call for that quintessential squash flavor, like squash soup.

It’s a wonderful ingredient to use in pastas, rice dishes, salads, and much more. You can roast it and cut it into pieces, or puree it to make a sauce or filling. You can also make a seasonal pie with butternut (or any sweet squash, really) instead of pumpkin. It’s excellent on its own as a side dish, too.

Since the butternut flavor is so distinctive, make sure it’ll pair well with the other ingredients in your recipe. It won’t work well if you need a more neutral-flavored squash.

Spaghetti squash is just what it sounds like: it has a stringy texture and mild taste that’s reminiscent of pasta. In fact, you can actually use it as a replacement for pasta!

You can substitute spaghetti squash for noodles in many classic recipes, like casseroles and lasagna. You can even use it as a healthy substitute for pizza crust. Because it tastes so mild, it works well as a substitution in all sorts of recipes that let its spaghetti-like texture shine.

Check out this post for more ideas on how to use butternut and spaghetti squashes!

With its buttery squash flavor, acorn squash is another of the most popular winter squashes. It gets its name from its distinctive acorn-like shape.

Acorn squash has sweet, smooth flesh, but it’s not quite as sweet and smooth as butternut. Its texture is a bit denser and more fibrous. This means it doesn’t blend up as easily for things like soups and fillings, although it can be done!

Acorn squashes work well in many iconic fall recipes. They look beautiful roasted and stuffed, but you can also use them as an ingredient in autumnal salads, stuffings, or pasta dishes.

You can’t miss a Hubbard squash: they’re huge, and often have a unique gray-blue color. Inside, though, the flesh is that squash-orange you’d expect, and it tastes sweet.

Since the texture of Hubbard squash can be dry and grainy, it’s often pureed or mashed. These large, tough squashes are hard to cut open, but some stores sell them already cut into pieces.

If you can’t find any that are already cut open, though, you might have to get creative. Some people use meat cleavers and brute force, while others actually bag and drop these squashes from a roof to crack them open.

Thanks to their sweet, pumpkin-like flavor, Hubbard squashes can replace pumpkin or butternut squash in many recipes.

Also known as the Japanese pumpkin, kabocha squash is sweet and has a smooth texture. As an ingredient, you can use it as a replacement for pumpkin, or acorn or butternut squash.

In fact, kabocha is one of the most versatile winter squashes. It tastes lovely in pasta dishes, especially when paired with sage (like many squashes). It works well in fall soups and salads, too. It’s often used in Japanese cuisine—try it in tempura or korokke.

Delicata squashes are on the small side. They’re also fairly easy to cut open and cook relatively fast, so they’re one of the simpler winter squashes to work with. They have creamy, sweet, delicious flesh, and it’s much easier to get to than some of the others on our list!

Unlike many winter squashes, you can also eat the skin of a delicata—just make sure you wash it thoroughly.

Since they’re easier to cut up, many people slice delicatas into small pieces before cooking. They taste excellent roasted or stuffed, or as an ingredient in soups, salads, or pasta dishes.

You’re less likely to run across banana squash at the store. If you do, though, it’s fun to try to cook with one! These long squashes can get enormous, so they’re often sold in manageable pieces. The blue, pink, or orange exterior makes them even more odd-looking. The flesh is still that ordinary orange, though.

Banana squash has a dense, rich flavor. While few recipes specifically call for this squash, you can swap it in for most other types.

With so many different varieties—many of which can be substituted for each other—squash is one of the most versatile ingredients you can use for fall cooking.

Aside from their tough exteriors, squashes are also surprisingly easy to cook. So, pick up a few you’ve never tried before, and experiment in the kitchen this autumn! 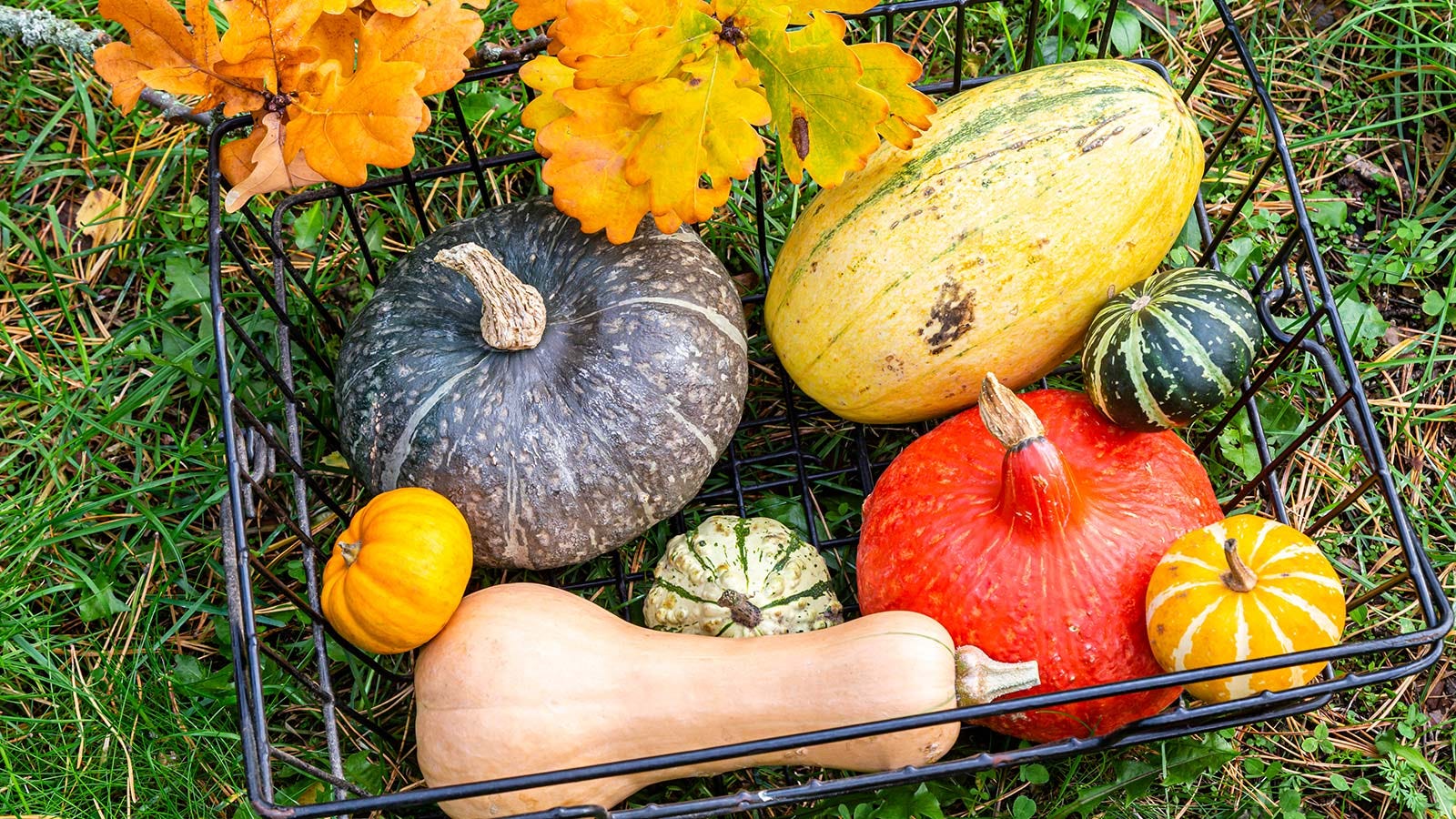