Mean Girls might have popularized the label, but cinema history is chock-full of snotty teenage vixens. Without them, there would be no Carrie or Heathers, and no reason for Andie to go to the principal’s office in Pretty in Pink.

While this trope is often set in high school, it certainly isn’t limited to that location. In our movie roundup, you’ll find classic mean girls from school all the way to the workplace.

Part of the enduring popularity of this trope is that the mean girls usually get what’s coming to them. Somehow, karma always manages to pay them back for their evil ways.

Here are some of filmdom’s meanest mean girls, and what happens to them. Just beware: this roundup is full of spoilers.

Mean Girls took this popular trope to a whole new level. Regina George (Rachel McAdams) is the leader of a nasty group of popular girls at North Shore High School, and she turns the protagonist into a mean girl, as well.

New girl, Cady (Lindsay Lohan), gets sucked into the drama but quickly learns who her real friends are—only after losing them, though. Regina ultimately gets hit by a bus—a karmic fate befitting the meanest of the mean.

You can watch Mean Girls on Hulu.

In Easy A, Emma Stone plays Olive, a high school student who lies about losing her virginity to her best friend. Unfortunately, school busybody, Marianne (Amanda Bynes), overhears the lie and spreads it around.

Olive keeps the lies going by pretending to sleep with other classmates who are ridiculed about their sexuality, weight, and more. Marianne and members of her church group start harassing Olive to get her to drop out of school.

It isn’t just her gossiping that makes Marianne mean. It’s the things she says to and about Olive, whom she barely knows. Unfortunately, nothing drastic happens to Marianne for her misdeeds. Olive just comes clean about her lies in an attempt to fix her sullied reputation.

You can rent Easy A on Amazon Prime Video.

Aside from being a Catholic school outcast, Nancy Downs (Fairuza Balk) starts off as a seemingly friendly girl with a penchant for witchcraft. She’s a little abrasive, but you get the sense that she’s just using that to mask her unhappiness. That all changes pretty quickly, though.

Nancy even convinces Sarah that her family is dead. Nancy winds up in the loony bin at the end of the movie, while the other two coven members lose all their witchy powers.

You can watch The Craft on Hulu.

Jenna just wants to be popular, but, unfortunately, it’s just not in the cards. After facing utter humiliation at her 13th birthday party, she makes a wish to be older. As luck would have it, some wishing dust sprinkles over her as she makes her wish. When she wakes up the next morning, she’s 30 years old (and Jennifer Garner).

Lucy Wyman (Judy Greer), aka Tom-Tom, is the mean girl who does her best to embarrass Jenna and ruin her birthday party. However, as an adult, Lucy is Jenna’s best friend.

One of the many memories Jenna is missing from the 17-year gap is how she became one of the “six chicks,” Tom-Tom’s clique.

When Jenna’s 13 again, she takes her revenge on Tom-Tom and never looks back.

After a grim accident befalls the original (and kinder) leader, Courtney (Rose McGowan) takes over as head of a group of mean girls. They play tricks on each other for their birthdays, but their prank on Liz Purr (Charlotte Ayanna) involving a jawbreaker candy goes terribly (and fatally) wrong.

Unfortunately, fellow student, Fern Mayo (Judy Greer), discovers the truth about Liz’s death. When Courtney decides Fern knows too much, she takes the girl on as a pet project to keep her quiet. What Courtney creates she can also destroy.

The mean girl does eventually get her due, however, when the whole school finds out Liz’s death was her fault.

You can rent Jawbreaker on Amazon Prime Video.

Unlike the meanies in most of the other movies on our list, Benny Hanson (Kate Vernon) doesn’t get a ton of screen time in Pretty in Pink. When she does appear, though, she definitely lives up to her mean-girl status.

Like the “richies” in many other ’80s teen dramas, the popular wealthy kids don’t get along with the poor kids. So, rich Benny is mean to poor Andie (Molly Ringwald) both in school and out. Andie stands up for herself, but that just earns her a trip to the principal’s office.

When Andie starts dating Blane (Andrew McCarthy), a friend of Benny’s boyfriend (James Spader), her troubles only increase as the two worlds collide.

Benny’s karma ends up being the emptiness of her life. She’s a shallow person with only fake friends.

You can watch Pretty in Pink on Hulu.

Heather Chandler (Kim Walker) is awful to everyone—even her “friends.” Her clique includes two other Heathers and a Veronica (Winona Ryder). Heather’s antics include making Veronica forge a love note from a popular jock to an overweight girl, who, after a complete humiliation, tries to kill herself.

Veronica wants to teach Heather a lesson as payback for all the torment she inflicts on others. With the intent of making her throw up, Veronica and her new boyfriend, J. D. (Christina Slater), mix up a nasty concoction and tell Heather it’s a hangover cure.

Unbeknownst to Veronica, J. D. puts drain cleaner in the drink and Heather dies. The two decide to forge a note and make it look like Heather committed suicide. As Veronica’s guilt intensifies, Heather Duke (Shannen Doherty) takes over as head of the clique and turns out to be just as nasty as dead Heather.

If this all sounds pretty morbid for an ’80s teen film, that’s because it is. Written by Daniel Waters, Heathers was meant to be the antithesis of the optimistic John Hughes films of that decade.

You can watch Heathers on Hulu.

Carrie is the epitome of revenge on mean girls. After all, it’s their awfulness that unleashes the titular protagonist’s telekinetic powers.

Chris Hargensen (Nancy Allen) is more like a pack leader, and she drives the aggression against Carrie White (Sissy Spacek) further and further. When the guys she recruits to dump pig’s blood on Carrie at the prom are too squeamish to do it, Chris does it herself. Her singular focus is tormenting Carrie.

In this classic horror movie, the karmic justice is sweeping. All but one of the people who torment Carrie die a gory death when she sets the entire school on fire. In a final act of retribution, Carrie sends Chris and her boyfriend flying to their deaths in a crashing car.

You can enjoy the bloody mess that is Carrie on Hulu.

Best known for her heroic turn on the TV show, Buffy the Vampire Slayer, Sarah Michelle Geller had to take on several bad-girl roles to change her image. Among these was Kathryn Merteuil in Cruel Intentions.

Based on the classic French novel, Les Liaisons Dangereuses, the film focuses on step-siblings Kathryn and Sebastian, who are both spoiled, rich, and horrible. They delight in gaining and wielding power over others.

When Kathryn’s boyfriend dumps her for another girl, she befriends the girl with the intent of getting revenge on her ex. She practically ruins the girl’s life, and also makes a bet with Sebastian that he won’t be able to get a chaste girl (Reese Witherspoon) to break her vow of celibacy.

Payback for Kathryn’s nefarious plots comes in the pages of Sebastian’s journal, which he makes public so everyone will finally know what a horrible person she is.

You can rent Cruel Intentions on Vudu.

Romy (Mira Sorvino) and Michele (Lisa Kudrow) were ridiculed in high school for numerous reasons, including their creative clothing style, Romy’s weight, and Michele’s back brace. Now, it’s time for their 10-year high school reunion, but neither feels like they’ve accomplished much since graduation.

So, the two decide to say they invented Post-its. Unfortunately, someone catches them in their lie. When mean girl, Christie Masters (Julia Campbell), finds out, she has a field day making fun of them throughout the rest of the reunion.

Christie is the perfect example of how some people never change after high school. She can’t escape her karma, though—her job is a joke and her once-popular husband is now a cheating alcoholic.

Andy (Anne Hathaway) longs to be a serious journalist. After she snags a gig as an assistant to the editor of a glamorous fashion magazine, she has to work hard to fit in. While the editor (Meryl Streep) is certainly no picnic, her other assistant, Emily (Emily Blunt), is just plain mean.

Emily’s nastiness does wear off, though, when Andy finally steps up her game and embraces some style. In this flick, the mean girl actually learns to be a bit nicer when the protagonist refuses to take her guff.

Of course, there’s still some karmic retribution for Emily when she gets the flu and can’t attend fashion week in Paris. She’s also replaced by none other than Andy, who starts to display her own mean girl tendencies.

The film does an excellent job of transporting the mean girl trope from high school to high-stress work environment.

You can rent The Devil Wears Prada on Amazon Prime Video.

So, hey, maybe the mean girl who tormented you in high school didn’t get hit by a bus or burst into flames after playing a prank on you at the prom. In the alternate world of movies, though, mean girls usually get their just desserts. 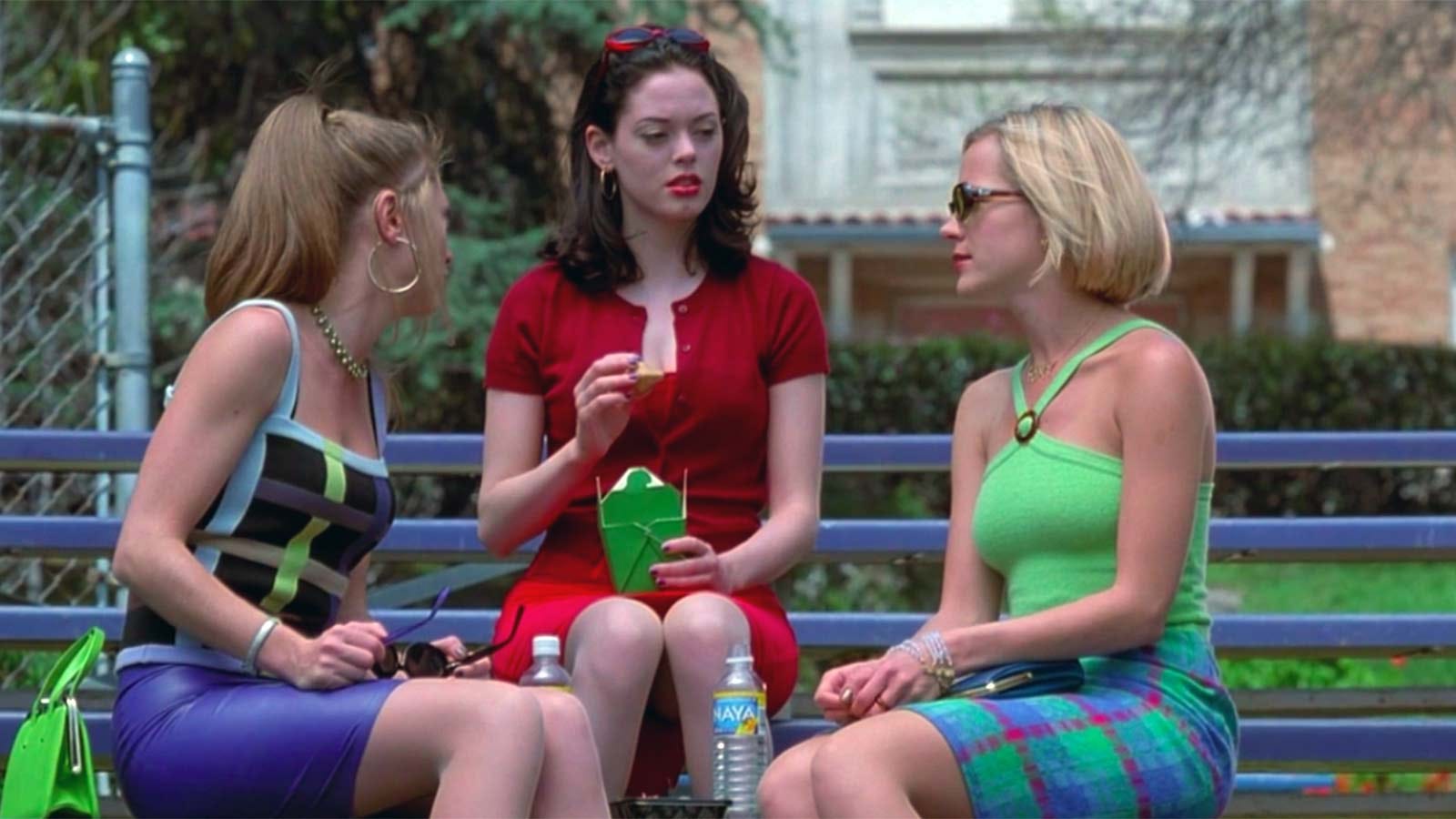