With Christmas just around the corner, now is a great time to start thinking about holiday yard décor. You’ve packed up the Halloween stuff, now get festive again with some outlandish inflatables.

Let’s be real here. While you can get an inflatable holiday decoration that isn’t veering into over-the-top territory, why would you want to? The very idea of having a yard decoration that blows up like a giant nylon ballon just lends itself to silliness.

With that in mind, we didn’t focus on the usual suspects like a generic Santa or a snowman. These picks are something so much more than just a Frosty bobbing in the wind. Make your yard the envy of your neighbors and try out one or more of these giant decorations.

A four-foot tall dinosaur dressed as Santa, beard included, may not be the giant inflatable you expected, but it is still pretty outrageous. The Santa dinosaur also lights up with LED lights, so he’s visible at night, making a great addition to any Christmas yard display that you want people to see.

Let this dinosaur grace your yard with his smile and bag of gifts.

Better Than Santa in a Sleigh 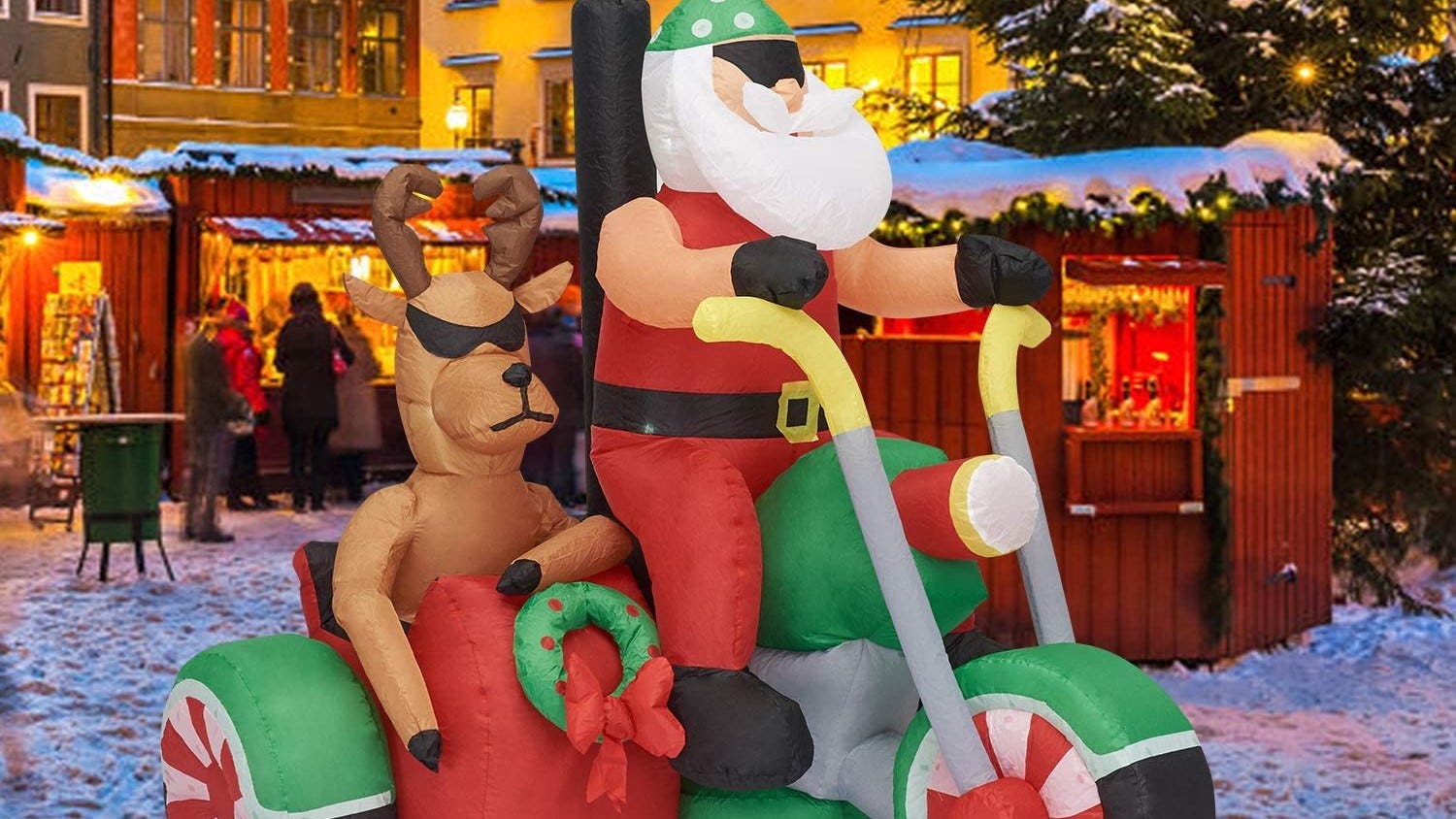 If you’d prefer your Santa look like a human, this guy is way too cool for a sleigh. Standing at six-feet-tall, this hot rod Santa has a cool bike and a reindeer in his sidecar. The LED lights will make sure no one misses the coolest Santa in the neighborhood.

This Santa lives for the open road.

No snow? Santa’s celebrating the warm holiday season in a grass skirt. What makes him even cooler is that he comes with a built in fan that makes him do the hula shake. He also lights up.

This Santa is a reminder that warm weather will be back soon.

Replace Santa With a Robot

Tell the kids Santa was replaced by a robot this year and set up this nifty six-foot-tall inflatable bot in your yard. He’s sure to attract some attention, and maybe even inspire some robot moves in your front yard.

Inflatable robots seem like an excellent outlandish addition to the holidays. 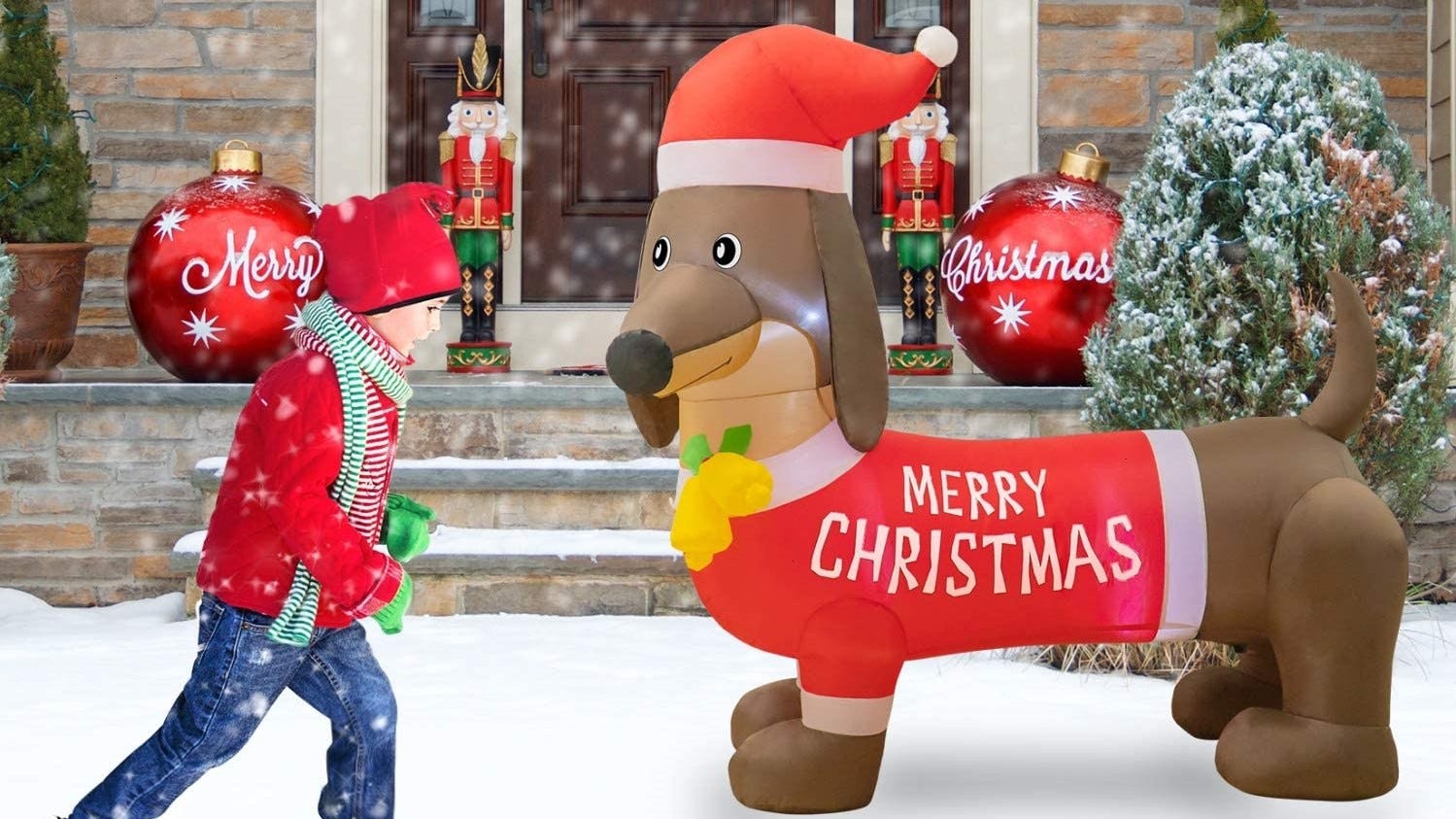 If your family loves dogs, you just might get a kick out of this cute Christmas dachshund. He’s ready for the holidays decked out in his Christmas sweater and Santa hat. He measure five feet in length and is almost five feet tall!

Celebrate the spirit of the holidays with a big inflatable wiener dog.

Pigs are festive, right? This four-foot inflatable pig sure is. He looks ready for the holidays dressed in his Christmas scarf and Santa hat. And, he’s adorable. Festive gear and good looks are all it takes to make it big in the world of holiday inflatables.

A big pink pig is sure to bring holiday smiles.

A festive llama in your yard may be the one thing that attracts driver’s by this holiday season, so why not be the only home in your town with one? This six-foot tall light up llama looks about as ready for the holiday season as anyone, and it’s super-cute.

Have a Fantasy Christmas with a Dragon

If you’re a fantasy lover or you’ve been having Game of Thrones withdrawals, this Christmas dragon is sure to be the perfect addition to your holiday decorations. It’s nine-foot tall and has really cool kaleidoscope lights inside, making it extra magical.

Or Maybe a Unicorn

Speaking of magical, this mystical unicorn is sure to delight young and old folks as they drive by or work by your home this holiday season. Not overly Christmassy, this seven-foot tall unicorn has a Christmas wreath around its neck with a beautiful rainbow mane.

This beautiful inflatable unicorn will have you thinking of sunshiny says.

Pass on the Inflatable Tree and Get a Cactus

Instead of decorating the trees in your front yard for Christmas this year, just get a holiday cactus. This guy is kind of silly, but he’s sure to be noticed. Standing seven feet tall, the Christmas cactus has on his Santa hat and is holding a guitar.

It's really the moustache that makes this inflatable cactus the best.

instead of sticking with the usual baubles and lights, add some over-the-top whimsy and creativity to your yard this year. You never know who’s frown you might turn upside down! 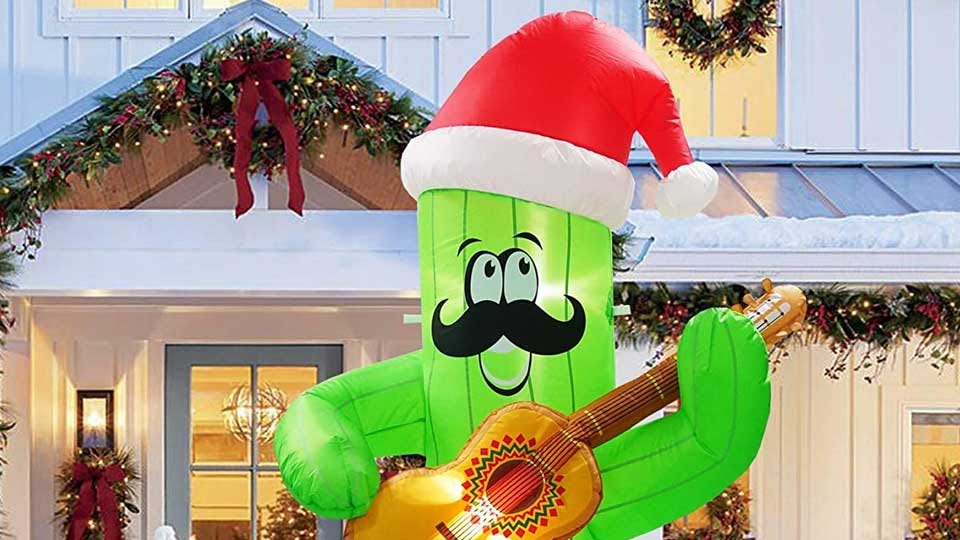