You hear over and over that you need to stay hydrated, but what does staying hydrated look like? Here’s how much water you really need to drink.

Keeping our bodies hydrated can sometimes feel more like a chore than a survival instinct. Time and time again, we’ve heard that we’re supposed to drink eight glasses of water a day to comply with a healthy lifestyle. However, the idea of health and hydration is not as straightforward as we’ve been lead to believe. The amount of water we need to drink depends on a variety of factors, including our age, sex, environment, and level of activity.

Let’s start with the most critical thing to be aware of—what dehydration is and feels like.

Side Effects of Dehydration

Low water intake causes dehydration, which has side effects and can cause serious complications if severe. Studies have shown that exercise- and heat-induced mild dehydration, described as the loss of the equivalent of 1-3 percent of body weight, can negatively affect brain function and reduce endurance.

When water levels in the body drop even further, cells are depleted of the fluids they need to carry out their activities, and cognitive functions like memory and attention are impaired. We’re continually losing water through perspiration, respiration, and urination, so it’s good to listen to our bodies and always keep water at hand.

If you feel thirsty, your body is already throwing out the sign that it’s mildly dehydrated. If you start experiencing headaches, muscle cramping, a dry or sticky mouth, or infrequent urination, you’re already moving into more dangerous levels of dehydration and should grab some water.

The rule stating we need to drink eight 8-ounce glasses of water a day to stay hydrated has been a reference point for most of us for years. However, experts don’t agree with it, and the origin of such recommendation is still the subject of debate.

The first appearance of the recommendation dates to 1945 with the publication of the Food and Nutrition Board of the National Academy of Sciences dietary guidelines. The recommendation was to consume 84-oz of water daily, but there was no mentioning of any scientific finding in support of that statement. The idea was then further spread by Frederick J. Stare, a reputable American nutritionist who recommended the consumption of eight 8-ounce glasses of water a day in a book he coauthored in the ‘70s. It wasn’t long before the 8×8 rule became commonly accepted wisdom—despite the lack of any real scientific backing.

While it’s not necessarily harmful advice, there’s no scientific evidence to prove its validity, at least not to the point of making it an official health recommendation.

The 2015-2020 U.S. Dietary Guidelines don’t include a specific recommendation for daily fluid intake, though they advice consuming plain water rather than flavored alternatives, and natural juices rather than those with added sugar.

The Institute of Medicine provides more guidance and recommends women to drink a total of 91-oz (10 glasses) of fluids a day and men a total of 125-oz (15 glasses). The bonus to this guideline is that research findings have estimated an increase in energy expenditure by approximately 96 calories a day with the consumption of 68-oz of water cool-to-room-temperature water.

Current recommendations call for more fluid intake than the 8×8 rule. While it might seem even more challenging, it should be noted that the numbers take into account all fluids, not just water. This means that the 125-oz include fluids from both food and drinks. Most vegetables and fruits contain a lot of water, including but not limited to watermelon, strawberries, oranges, cucumbers, lettuce, and tomatoes. Natural drinks with no additives count as well, including coffee and tea (without added milk or sugar). If water is too boring, try infusing it with herbs and fruits to make it tastier and more enjoyable. Sparkling water is also an option.

Be mindful of diuretics as they cause you to excrete more water than usual. This means you end up making more frequent runs to the toilet, and you have to compensate with plenty of fluids. Sodium, on the other hand, causes water retention. In an attempt to balance out the excess sodium in your system, your body accumulates extra water and causes parts of your body, like your hands, legs, and feet, to swell. Your thirst is then stimulated, and the excess fluid intake leads the accumulated water to be released via urination. While our bodies are self-regulating, it’s good practice to be aware of what we eat and drink to keep every system running smoothly.

Perhaps of greater interest is the correlation between hydration and weight loss. Although not entirely confirmed by research findings, there is a relationship between the two factors. Thirst and hunger come from the same part of the brain, which makes it easy for our bodies to get confused and tell us we’re hungry when we’re actually just thirsty. Thus staying hydrated can prevent the consumption of extra calories. Furthermore, studies have shown drinking 17-oz of water can temporarily speed up our metabolism by up to 30 percent for 30-40 minutes, and that by drinking it a half hour before a meal can reduce how much you eat.

Although not a common problem, over-hydration can happen and has several consequences. It generally affects athletes and runners, as well as individuals working out intensely in a warm environment. The excessive sweating causes sodium levels to drop, which leads to more thirst and more water intake, and results in our cells becoming waterlogged. That’s when symptoms begin to show: nausea, confusion, exhaustion, irritability, and seizures. If the level of water in our bodies becomes dangerously high, it can even result in a coma or death. For the vast majority of people, however, the risk of over-consumption water borders on non-existent and even athletes can mitigate the risk by supplementing their water intake with electrolytes like sodium, potassium, and magnesium.

So How Much Water Should You Drink?

While we do have guidelines to help us keep track of our water consumption, it’s good practice to listen to our bodies. We’re not all the same, so one measure won’t perfectly apply to everyone.

The amount of water you need depends on a variety of factors: age, sex, body mass, environment conditions, level of activity, health status, and pregnancy status. Thirst is already a good indicator of our fluid needs; however, we shouldn’t only drink when thirsty as the signal turns on when your body is already mildly dehydrated.

There are several things that tell us we need more water: excessive sweating due to high heat and exercise; dry mouth, skin, and chapped lips; fever and fluid loss (i.e. diarrhea or vomiting); headaches; muscle weakness and fatigue; reduced amounts of saliva and stinky breath; pregnancy (minimum of 81-oz of water daily); and breastfeeding (minimum of 105-oz of water daily). The more you stay hydrated, the fewer issues you’ll encounter.

And how do you tell when you are well-hydrated? The best way, according to the Mayo Clinic, is to check your urine. If it’s pale yellow, you’re hydrated. If it’s darker yellow, you’re not. And if it’s crystal clear, you’re probably overhydrated.

Staying hydrated is crucial to keeping your body functioning and happy. While the 8×8 might be more of a rule of thumb than a fact, it’s a good starting point for those of us who struggle to get enough fluids daily. Strive always to have water at hand (and in sight)—a good water bottle can help—eat plenty of fluid-rich foods, and be mindful of the signals your body gives out—when you’re thirsty, or your urine color is dark, drink up. It’s a simple and cost-effective way to stay healthy. 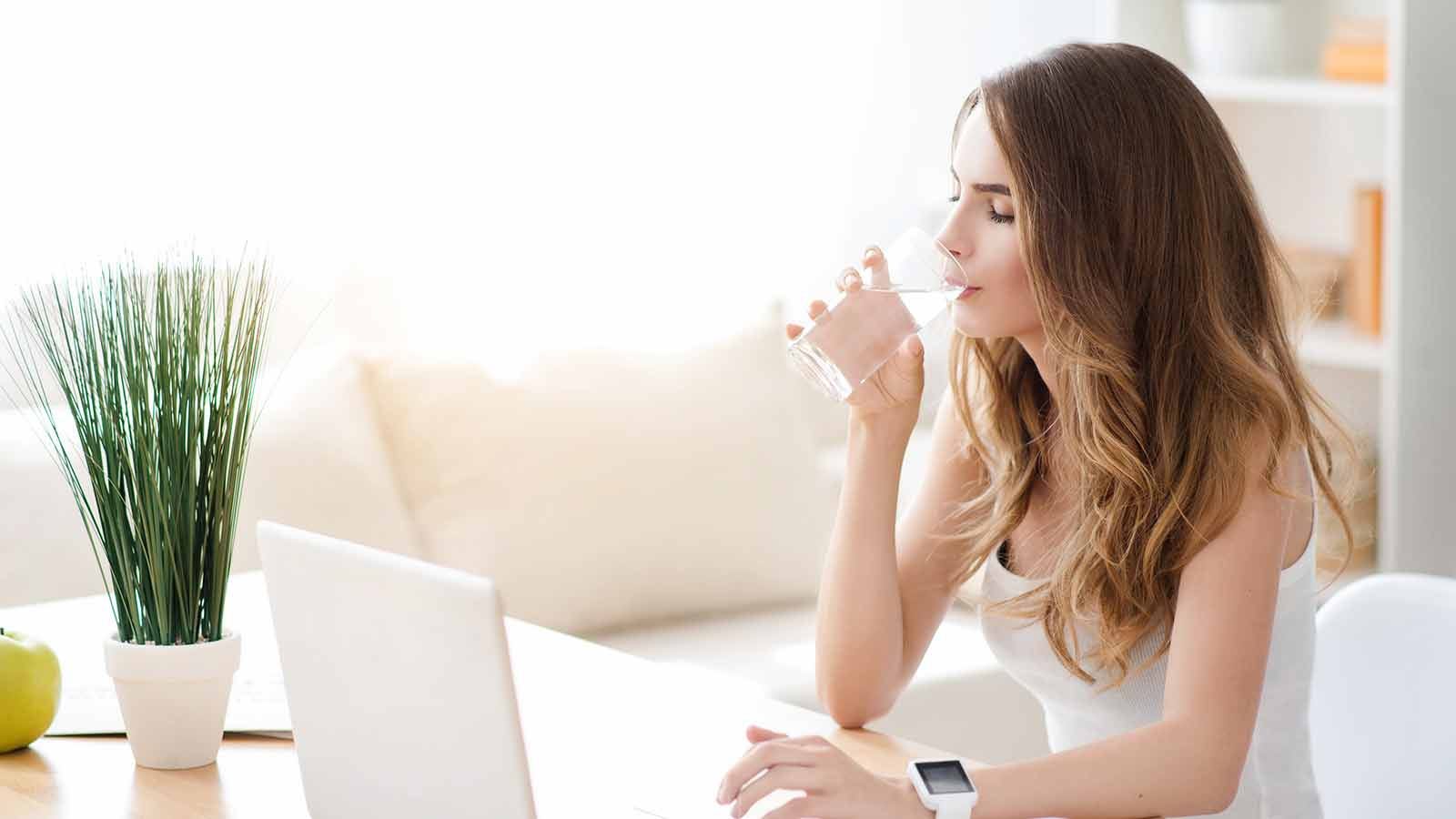